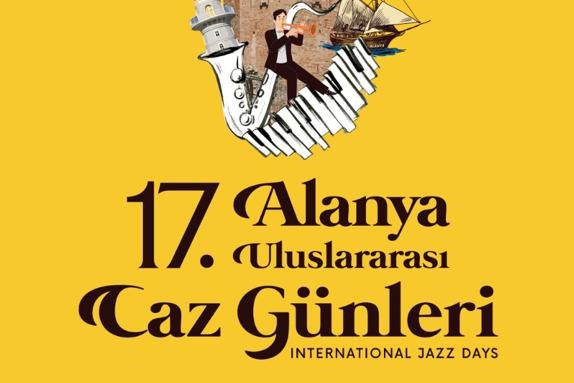 The 17th Alanya International Jazz Days, which will be organized by Alanya Municipality between 22-25 September, will bring together valuable musicians and artists in Alanya.

Alanya Municipality Will Bring Different Colors of Jazz to music lovers for the 17th Time
Alanya International Jazz Days, which has hosted more than 340 artists from our country and abroad, will celebrate its 17th anniversary again this year with a full program.

Alanya Municipality will host world jazz stars at the 17th International Jazz Days this year. In the organization, artists who have made a name in jazz music will give music lovers a jazz feast in the historical atmosphere of Kızılkule. 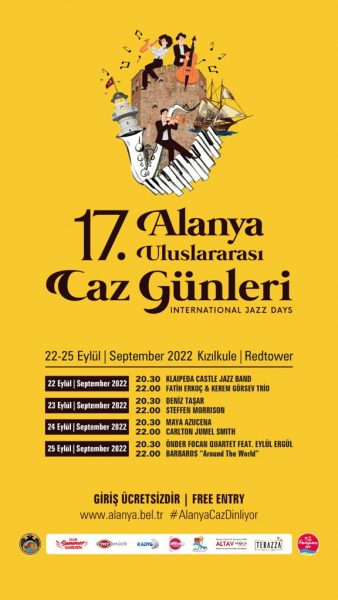 Klaipeda Castle is one of the most popular and important classical jazz bands in Lithuania, bringing together experienced, successful and distinguished musicians of the country. They stand out with their perfectionist and professional interpretations and artistic performances.

Jazz Project Fatih Erkoç and Kerem Görsev Trio – On Stage at 22.00
Fatih Erkoç and Kerem Görsev are among the distinguished jazz musicians raised in Turkey. Known for playing the trombone and different instruments equally as well as his voice, Erkoç’s voice color is a master at conveying all kinds of musical textures, from jazz classics to Turkish music. Expanding his musical field since the early 1990s, Erkoç made a big breakthrough with pop hits such as “Ellerim Bomboş”.

It has been 13 years since the release of the album “The Lady From Istanbul”, but the series of concerts in which Erkoç and Görsev performed similar jazz classics has been following a great tradition for 13 years. Erkoç played many instruments in the ‘TRT Caz ve Hafif Müzik Orkestrası’ in his early years in Turkey, and later took the stage at jazz festivals in many countries in Europe and America. Kerem Görsev, on the other hand, has been one of Turkey’s most famous and prolific jazz musicians since his first album released in 1995. Continuing his life in a balance between jazz classics and his own compositions, Görsev has a great mission for Turkish jazz with his career spanning more than 40 years.

Deniz Taşar – Friday, September 23 / 20.30
Deniz Taşar, in addition to her latest album Pişman Olunmayan Dünler and songs from her previous albums, will also expand from soul to R&B and hip-hop with her unique interpretations. She is a singer, songwriter, designer and multidisciplinary artist who has brought a brand new breath to Turkish jazz vocals with her unique vocal style and tone, and has expanded the boundaries of jazz with her recent productions. It is not possible to express Taşar’s music in a single genre because there are different styles in her that she listens to, likes and feels.

Steffen Morrison / 22.00
Morrison, who is also a songwriter, has an interest in music that shakes people’s hearts and souls. He appeals to a wide audience with his passionate performances that he presents with originality, as well as his appearance and voice. Steffen made a name for himself by enchanting his audience with his magnificent performances at the world-famous Port of Rotterdam North Sea Jazz Festival. Steffen Morrison, who impresses him every time he takes the stage, will give a magnificent concert to his fans on September 23 at 22:00.

Maya Azucena – Saturday, September 24 / 20.30
Maya Azucena makes music that uplifts your soul with her sound, which is defined as a fusion of indie pop and modern R&B, and blues interactive vocals. In addition to the numerous awards he has received for both his humanitarian work and his music, his 4-octave voice was approved by the Grammys for his collaboration with Stephen Marley when he was selected as the Best Reggae Album. The artist, who defines herself as a Brooklyn singer and composer, has collaborated with many artists both from her country and internationally.

Carlton Jumel Smıth Soul Man / 22:00
Carlton Jumel Smith is an independent singer, composer, producer, who honestly puts his own music on the line, known for his shows that broke out in many corners of the world.

The brilliant part of his career; The album “1634 Lexington Avenue” praised by the critics for its sound that reveals the soul music we miss, parts of which was released in 2019, the portrayal of his idol James Brown in the Barry Levinson film “Liberty Heights” and the Off – Broadway musical “Largo” with Cyndi Lauper can also be shown as a leading role.

Önder Focan Quartet feat in the final, Eylül Ergül – Sunday, September 25 / 20.30
In addition to 17 albums and 1 DVD, a new vinyl (Aubergine) that he has produced for himself, jazz guitarist and composer Önder Focan, who has participated in many national and international festivals and given concerts, is one of the brightest of the young generation, besides his band and repertoire. Vocalist and pianist Eylül Ergül will be on stage at Alanya Jazz Days.

A colorful repertoire will be presented at the concert, which will include pieces from the latest Önder Focan Group albums Aubergin/Patlıcan and Nu Book, as well as jazz and R&B pieces to be performed by Eylül Ergül. Other musicians in the group are; Burak Cihangirli, one of the most admired drummers of the young generation with his swing and dynamism, double bass player Enver Muhamedi with his virtuosity and musicality, and trombonist Bulut Gülen, who made a name for himself with his performances in the USA and Turkey, and who gained much acclaim with his latest album Bosphorus Train.

Barbaros “Around The World” / 22.00
Barbaros, one of the successful voices of our country, will meet with the audience for the first time in Alanya on September 25 as part of the Alanya International Jazz Days. Barbaros, who graduated from Istanbul University State Conservatory Opera Singing Department, opens the doors of world music to the audience with his wide repertoire from opera arias to musicals, from pop music to jazz. He sings a wide repertoire including Arabic and Russian songs.