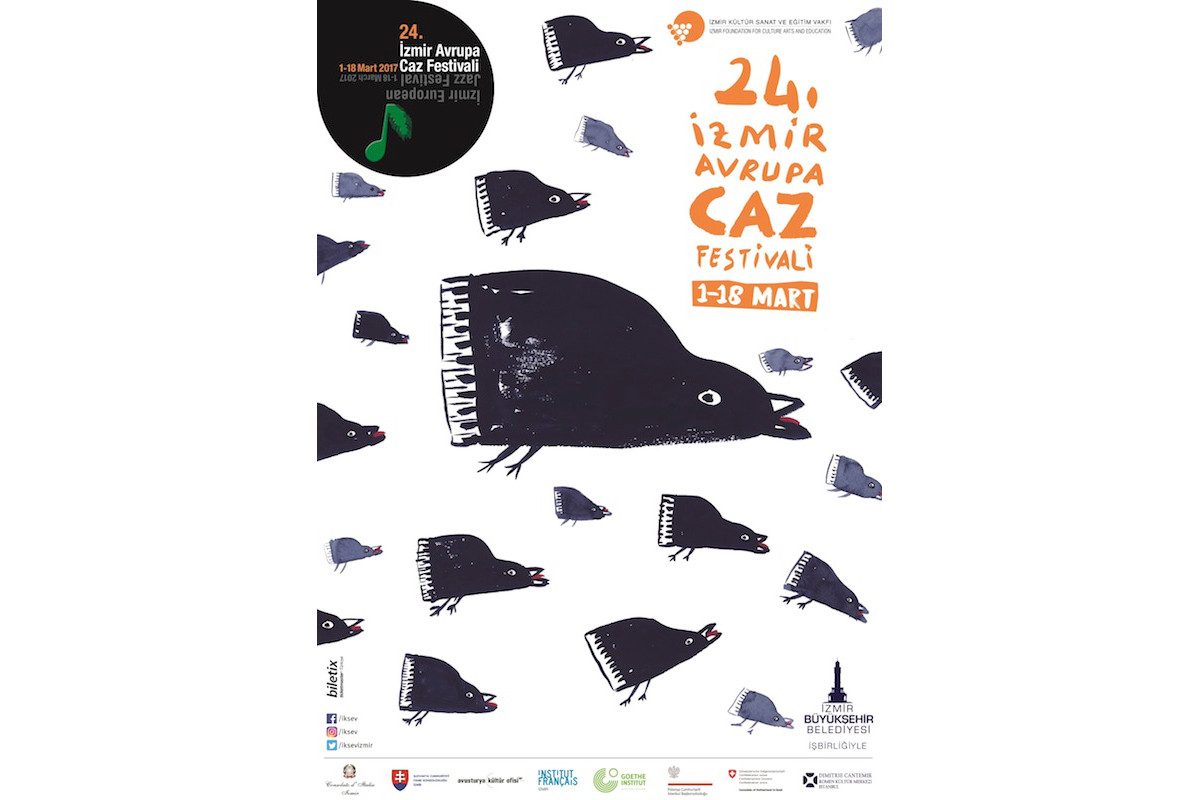 24th Izmir European Jazz Festival’s program includes eleven concerts, one exhibition, one seminar, one movie screening, workshops and activities and it will present people in Izmir with a magnificent jazz feast.

24. İzmir Avrupa Jazz Festivali’nin 1 Mart 2017 Çarşamba günü saat 20.00’de AASSM Konser Salonunda 24th Izmir European Jazz Festival will start with the opening concert at AASSM Concert Hall on the 1st of March 2017, Wednesday, at 20:00 with the performance of pianist Manuel Magrini, who is one of the extraordinary talents of Italian jazz. Manuel Magrini’s incredible talent was noticed when he was very young, and he has won many important awards at all the competitions he has participated both as a solo artist or with bands. This young voice of Italian jazz is getting ready to impress all the jazz lovers in Izmir with his virtuosity.

İKSEV will present plaques to all the festival partners before this concert, which is organized with Italian Consulate in Izmir. The winners of the 15th Jazz Poster Competition and those chosen to be exhibited will also receive their awards and certificates. 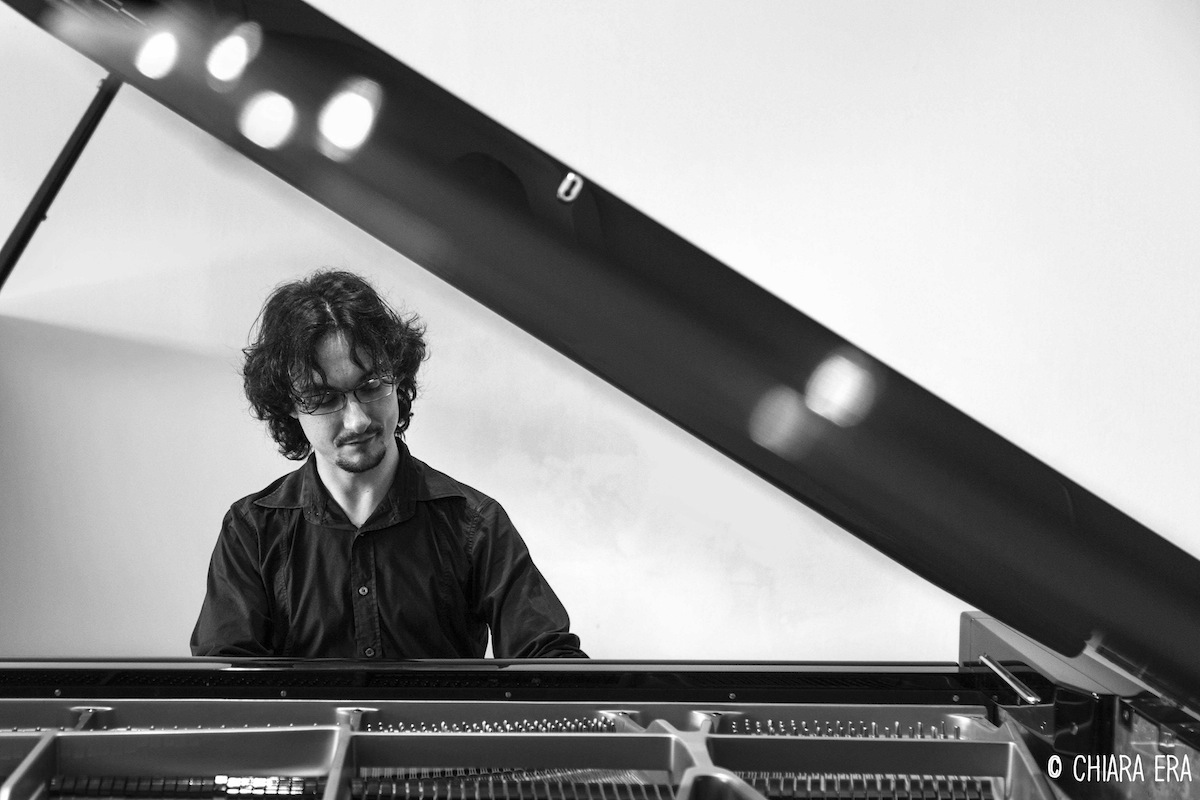 Video performance art is constantly improving and renewing itself; and two groundbreaking performances of this most active branch of contemporary art will be presented to the viewers on an international platform at the 24th Izmir European Jazz Festival. Odyø Vijul is a collective project, founded by Aras Özgün and Yiğit Eygi, who are the two leading names in the field, aims to reconstruct the improvizational nature of jazz through digital interaction tools, sounds and visuals. They will reinterpret Etienne Jules Marey’s leading cinematic visuals in a different time flow and different technologic platforms during their project called Choronographs: Improvisations on Marey.

The event will take place on the 3rd of March 2017, Friday, at the Small Hall in AASSM. During the second part of the event, Burak Erdeniz, Hazal Bayar and Talat Savaşkan will present their interactive project Expérience limite, which aims to create an experience of limitation through the interaction of video visuals and experimental music. This special performance is invitation only.

24th Izmir European Jazz Festival will host the fantastic trio from the Czech Repuclic Otto Hejnic on the 4th of March, 2017, Saturday. The trio consists of Ondrej Krajňak (piano), Stefan Pista Bartus (double bass) and Otto Hejnic (drums) and has received much praise, including from All About Jazz magazine. Otto Hejnic Trio has released three records and performed at many prestigious jazz veues. They will present the listeners with a selection from their albums at AASSM’s Small Hall during this concert which is organized with the cooperation of Honorary Consulate of Slovakia in Izmir. 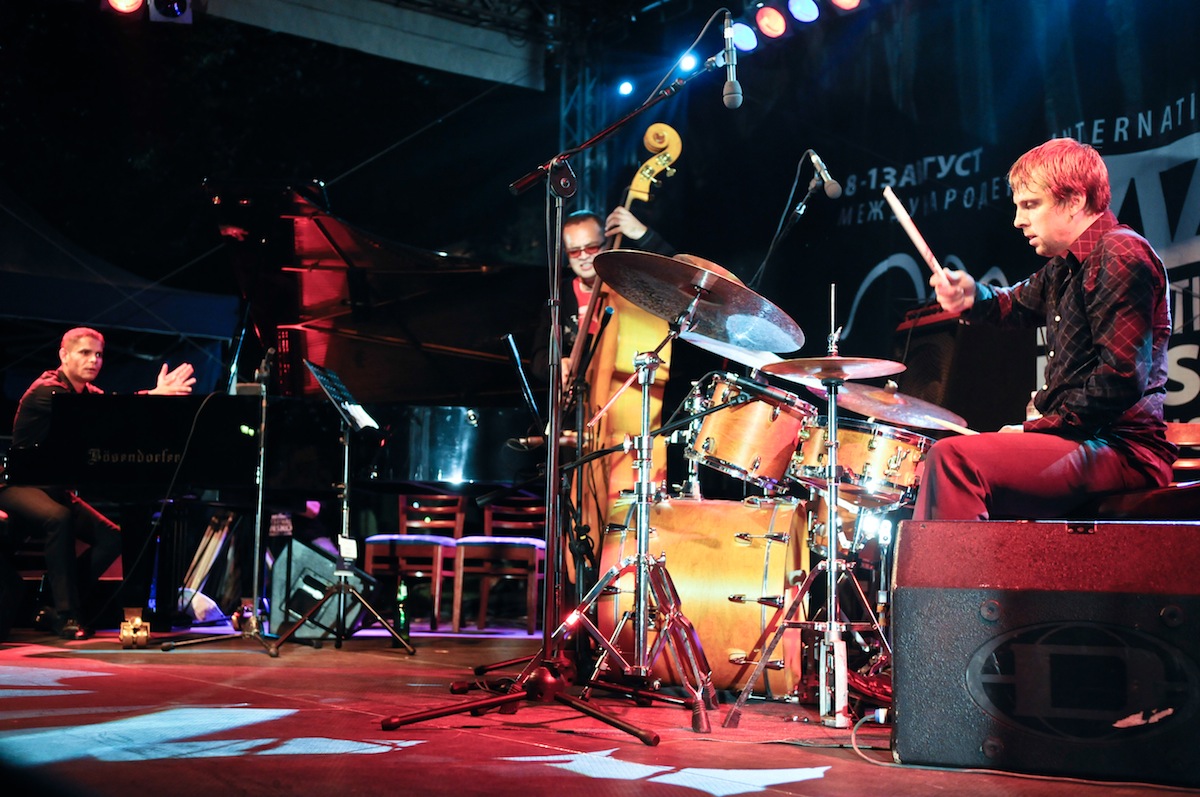 Triple Ace- Colours in Jazz consists of Oliver Kent (piano), Uli Langthaler (double bass), Dusan Novakov (drums), and plans to bring along the colours of Austrian jazz along to the 24th Izmir European Jazz Festival. The concert will take place at AASSM’s Small Hall on the 6th of March 2017, Monday, with the contribution of Austrian Cultural Office in Izmir. The group will present their latest album “Faces” during this concert and take their listeners along on an adventure with their incredible individual talents, powerful synergy, and their unique and flowing style.

Jazz singer, composer and the queen of French singers Marie Mifsud will perform two concerts at the 24th Izmir European Jazz Festival. The first concert will take place on the 8th of March 2017, Wednesday, at AASSM’s Small Hall with the cooperation of Izmir French Cultural Center. The quintette consists of Marie Mifsud (vocals), Adrien Leconte (drums), Victor Aubert (double bass), Thibault Gomez (piano) and Quentin Coppalle’den (flute), and their second concert will take place at Izmir French Cultural Center’s performance hall on the 9th of March 2017, Thursday. They will present compositions of Boris Vian, who was  a French author, poet, musician and singer.

Masaa is one of the most important intercultural music bands in Germany, and they are participating in the 24th Izmir European Jazz Festival with a project that combines Arabic poetry with contemporary jazz. The concert will take place on the 10th of March 2017, Friday, with the contributions from Goethe Institute Izmir. The band consists of Rabih Lahoud (vocals), Marcus Rust (trumpet), Clemens Pötzsch (piano) and Demian Kappenstein’dan (drums) and they will perform an unusual combination of jazz, neo classical, world music, pop, oriental sounds and Arabic poetry.

Jazz Forum magazine called Artur Dutkiewicz “the ambassador of Polish jazz” and “one of the most prolific Polish jazz musicians abroad” in their December 2012 issue. Artur Dutkiewicz, who is one of the most important Polish pianists, will be accompanied by Michał Barański (bass) and Łukasz Żyta (drums). Artur Dutkiewicz Trio has performed at the most prestigious venues worldwide, and they will present examples from their “Prana” project on the 11th of March 2017, Saturday at the AASSM’s Small Hall. The concert is organized with the contribution of General Consulate of the Republic of Poland in Istanbul and Honorary Consulate of the Polish Republic in Izmir. 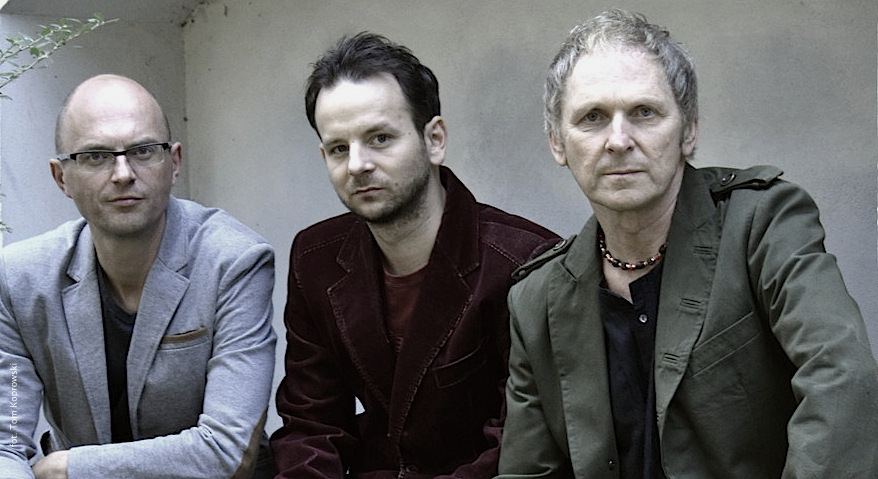 The Most Important Event in Swedish Jazz: Mats-Up – 14 March Tuesday 20:00

Matthias Spillmann – Mats-Up is founded by the Swedish trumpet player Matthias Spillmann, alto saxophonist Reto Suhner, pianist Marc Méan, bassist Raffaele Bossard and drummer Dominic Egli, and is described as “the most important event of Swedish jazz”. They will be performing on the 14th of March 2017, Tuesday, at AASSM’s Small Hall. The concert will take place with the cooperation of Honorary Consulate of Sweden in Izmir. Mats-Up will win your hearts with their The Nature Of The Blues project which combines archaic and contemporary materials.

Sorin Zlat Quartet’s Endurance album includes rearrangements of the legendary works of the legends such as John Coltrane, Dizzy Gillespie and Thelonious Monk and Romanian folklore re-written with jazz rhythms. The concert will take place on the 15th of March 2017, Wednesday, at AASSM’s Small Hall and is organized with the collaboration of Istanbul Dimitrie Cantemir Roman Cultural Center. Pianist Sorin Zlat will be accompanied by vocalist Mihaela Alexa, bassist Michael Acker and drummer Claudiu Purcarin during this memorable concert with harmonic and rhythmic depth.

Ozan Musluoğlu is one of the most important double bass players of our times, and he will be accompanied by his “Best Friends” who are also the leading names in Turkish jazz. They will perform the closing concert of the 24th Izmir European Jazz Festival on the 18th of March, 2017, Saturday, at AASSM’s Concert Hall. Ozan Musluoğlu House Band and Ayşe Gencer (vocals),  Ece Göksu (vocals), İlham Gencer (vocals), Orçun Sünear (vocals), Önder Focan (guitar), Sibel Köse (vocals), Su İdil (vocals), Bulut Gülen (trombone), Can Çankaya (piano), Engin Recepoğulları (saxophone), Ferit Odman (drums), Ozan Musluoğlu (double bass) and Şenova Ülker (trumpet) will take the listeners along on an incredible jazz adventure.

Experience a festival within the festival with all the free activities the 24th Izmir European Jazz Festival has to offer.

Suzan Kıryaman’s work has won the 15th Jazz Poster Competition, arranged in order to pick a design for the 24th Izmir European Jazz Festival’s poster by İKSEV. Emre Karacan won the second place and Sevda Ateş won the third. The special Jury Award was given to Çağkan Küçükdağaşan. These posters will be on exhibition along with the 33 other works selected by the committee between 1-18 March 2017 at the Downstairs Gallery in AASSM.

Ali Kızmaz, Yiğit Eygi and Aras Özgün will exhibit their interactive video installation “The Needle and the Loom” at the downstairs gallery between 1-18 March 2017. The spectators will be able to create a visual arrangement of Izmir with instruments and can create visual-auditory compositions spontaneously.

This is will highlight the journey of jazz in Turkey from the first LPs to the first DVD of a concert recording. Why was an English introduction included in the first jazz LP released in Turkey? Musicians who founded recording labels in order to release their own albums. Locals who released their albums through foreign labels. These and many other topics such as amateur recordings of young jazz musicians will be discussed during this conversation hosted by Devrim Dikkaya on the 4th of March 2017, Saturday. Dikkaya will talk about the details of the past and present of local jazz during this activity that will start at 14:00.

Lindy Hop, the leading name in jive, boogie-woogie and acrobatic Rock and Roll—influenced by jazz, tap, breakaway and Charleston dances—will give a workshop for all those who want to dance. Lindy Hop Izmir Association is waiting for you on the 5th of March 2017, Sunday, at 14:00 at İKSEV.

Live Video Performance Workshop will take place between 6-9 March 2017, at 10:00-13:00 at İKSEV with the cooperation of Izmir University of Economics Faculty of Communication Cinema and Digital Media department. Aras Özgün, Yiğit Eygi and Ali Kızmaz, who are the leading names in the field, will host the workshops.

Masaa, one of the most important intercultural music bands in Germany, will share their music which combines  jazz, neo classical, world music and pop with oriental sounds and Arabic poetry with young jazz musicians on the 11th of March 2017, Saturday. The workshop will take place at 9:30-13:00 at İKSEV and will be lead by Lebanese poet Rabih Lahoud, trumpet player Marcus Rust, pianist Clemens Pötzsch and drummer Demian Kappenstein.

Publik Market aims to introduce local producers, artisans, designers and artists with communities, supporters and firms. It will take place at Edit on the 11th of March, Saturday starting from 12:00. Publik Market will bring jazz music and design culture to the streets with its Jazz Edition during the 24th Izmir European Jazz Festival.

Moderator Ömer Durmaz will host Prof. Dr. Betül Atlı, Murat Meriç and Emin Sonad on the 11th of March 2017, Saturday, at İKSEV during the discussion panel whose topic will be Packaging Music. The panel will start at 14:00 and it will include discussions on the transformation of music into a design expertise through the applications of graphic design, music packaging design as a graphical product, and the relationship between music being promoted, album and the artist.

Ambrassador of Polish jazz Arthur Dutkiewicz and his Trio will give a workshop on the 12th of March 2017, Sunday, at 14:00 at İKSEV. Young jazz musicians will get the opportunity to work with Dutkiewicz, who is one of the most prominent names in contemporary jazz.

Festival Advisor, jazz historian, journalist-author Francesco Martinelli will focus on the legendary trumpet player Dizzy Gillespie during his traditional jazz seminar this year. Ümit Tuncağ will translate the seminar, which will take place on the 16th of March 2017, Thursday at 18:00 at İKSEV, into Turkish.

Young talent Hakan Başar Jr. Trio and their “Tribute to Oscar Peterson & Michel Petrucciani” concert will bring a fresh perspective to the 24th Izmir European Jazz Festival. 12 years-old jazz pianist Hakan Başar Jr, accompanied by Nezih Yeşilnil on the bass and Adnan Başar on the drums, will perform on the 17th of March, Friday, at 18:00 at French Cultural Center. Those who wish to attend can pick up their invitations from the İKSEV box office at AASSM and French Cultural Center.

Bertrand Tavernier , who is one of the leading names in Fransız New Wave movement, and American director Robert Parrish search for the soul of jazz around the banks of the Mississippi River in their travel documentary Mississippi Blues. The documentary will be screened on the 17th of March 2017, Friday, at 19:00 in the renovated movie theater of the French Cultural Center. The movie entrance is free of charge, just like the other activities. Those who wish to attend can pick up their invitations from the İKSEV box office at AASSM and French Cultural Center.

Festival Teaser from the Youth

Tickets are Available on Biletix

The 24th Izmir European Jazz Festival’s tickets are available at Biletix box offices starting from the 15th of February 2017, Wednesday. The invitations for the invited guests can be picked up from the İKSEV box office at AASSM on the day of the event.