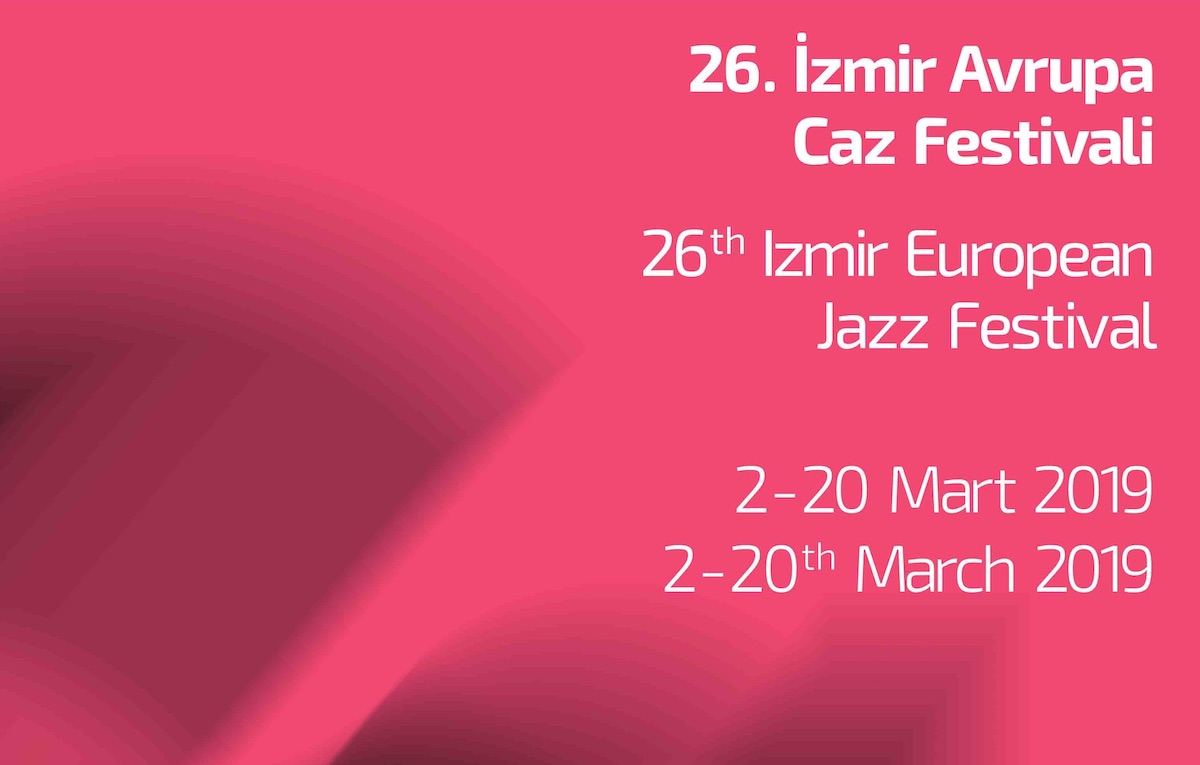 The 26th Izmir European Jazz Festival will be held between 02-20th March 2019 by Izmir Foundation For Culture Arts and Education with the contribution of Izmir Metropolitan Municipality.

The festival which organized in cooperation with Italien Consulate in Izmir, Istanbul Dimitrie Cantemir Romanian Cultural Center, Institut Francais Turquie Izmir, Honorary Consulate of Switzerland in Izmir, Istanbul Austrian Cultural Office and Goethe Institut Izmir, will start with the opening of the exhibition and the Ferit Odman Quartet concert on Saturday, 2 March 2019 at AASSM.

26th Izmir European Jazz Festival will bring an unforgettable jazz festival to the people of Izmir with a program including nine concerts, a jam session, an exhibition, a seminar, a movie screening and workshops.

Ferit Odman who is a pioneer of jazz drums in Turkey, will feature the quartet arrangements from his albums “Autumn in New York” and “Nommo” at 26th  Izmir European Jazz Festival Opening Concert. Ferit Odman, Engin Recepoğulları (saxophone), Ercüment Orkut (piano) and Kağan Yıldız (contrabass) will perform and take their listeners on a beautiful journey in the depths of the hard-bop world, at the AASSM Concert Hall on March 2, 2019, Saturday. Quartet, which consists of the most important jazz musicians of today, takes part in many projects together and separately, participates in concerts and festivals and continues their recording works. 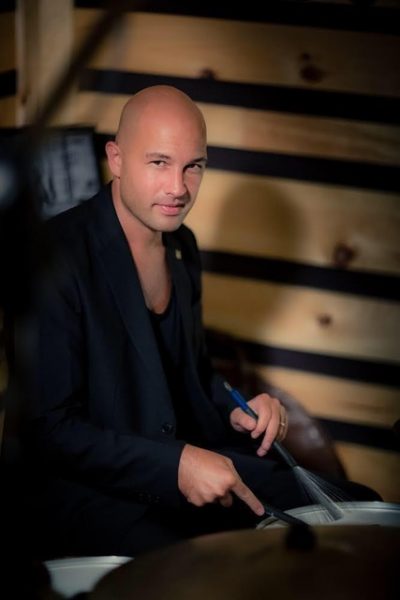 The Magical Coalescence of Saxophone and Piano

The second concert of the 26th Izmir European Jazz Festival will be performed by Jazz Virtuoso Duo which consists saxophonist Gianni Oddi and the pianist Alessandro Bonanno. Oddi and Bonanno will present their world-renowned virtuosity skills in a concert to be held in cooperation with the Italian Consulate in Izmir. Jazz Virtuoso Duo, both of whom had classical education but choose to progress in jazz music, will host their audience with magical association of saxophone and piano at the AASSM Small Hall on March 4, 2019, Monday.

Marion Rampal Trio which consists Marion Rampal (vocal), Pierre-François Blanchard (keyboard and vocal) and Anne Paceo (drums and vocals), will give a different jazz experience to audience at AASSM on Tuesday, 12 March 2019 in collaboration with the Institut Francais Turquie Izmir. Marion Rampal, who has an exceptional talent as a vocalist, is a well-known singer on European stages during her high school years. Rampal, who has a considerable reputation as a songwriter, will present a special repertoire in a wide range with her Trio. 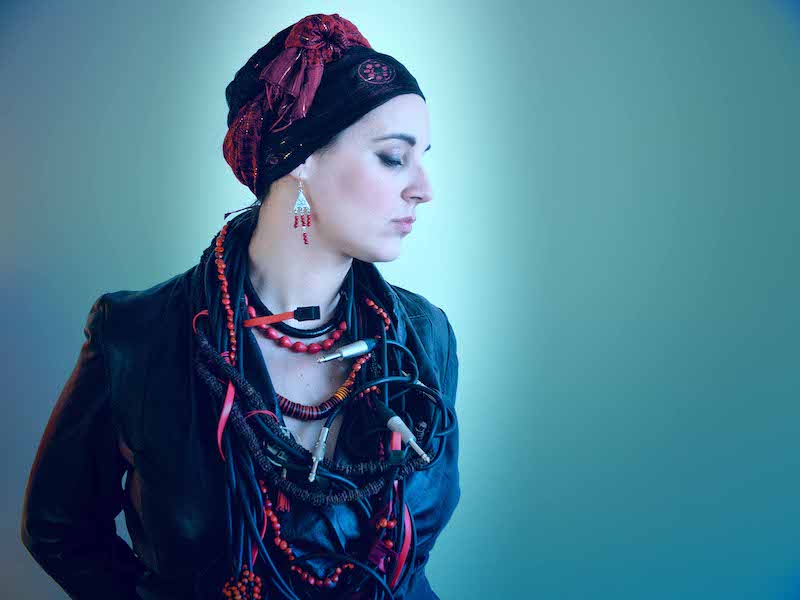 Two concerts will be held at the 26th Izmir European Jazz Festival in cooperation with the Honorary Consulate of Switzerland in Izmir. Nu Bass consisting of François Lindemann (piano & el. piano & composition), Amine Mraihi (lute), Olivier Clerc (drums), Patrick Perrier (bass & double bass) and Ivor Malherbe (bass & double bass), will perform at AASSM Small Hall on Thursday, March 14, 2019 at 20:00. Nu Bass, which can be defined as a unique “ethnic jazz band” regarding the instruments (piano, drums, tabla, lute and a rare combination of 2 double basses) that they involved in their music, will perform pianist François Lindemann’s special compositions created for these unique instruments. Nu Bass who has been at numerous events, are among the sought-after guests of festivals. 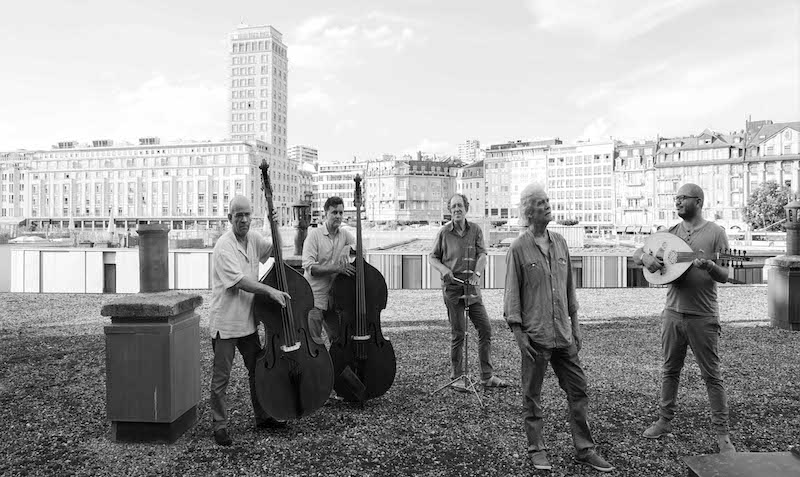 Pilgrim Quintet which is the 26th Izmir European Jazz Festival’s second concert which is held in collaboration with the Honorary Consulate of Switzerland in Izmir, is one of the most exciting groups of young European jazz music. Pilgrim, founded by Zurich-based tenor saxophonist Christoph Irniger, will present their fourth album, Crosswinds, to audience in Izmir. Pilgrim which consists Christoph Irniger (tenor saxophone), Stefan Aeby (piano), Dave Gisler (guitar), Raffaele Bossard (bass) and Michi Stulz (drums), difficult to categorize, is known for creating a heavy and versatile music. This extraordinary concert will be held on March 16, 2019 at 20.00 at AASSM Small Hall. 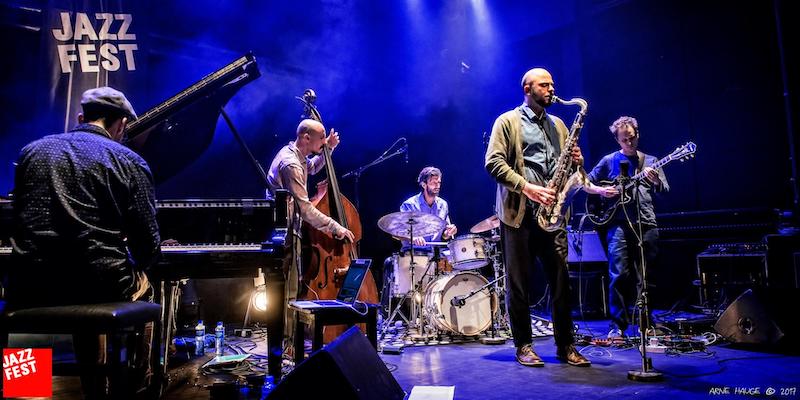 Is the Color of Music Purple?

Simon Raab (piano), Štafpán Flagar (sax), Martin Kocián (bass) and Michał Wierzgoń (drums), who came together by chance in a jazz session in Linz, Austria, since then Purple is the Color was created. Although the music of the band is nourished by the jazz quartet tradition, it does not stay away from the unifying elements of pop and folk music and connects all of these in a modern sound system. Purple is the Color uses all the right notes to find the right flow between composition and improvisation. Festival with the collaboration of the Austrian Cultural Office in Istanbul, will enable us to meet Purple is the Color on Monday March 18, 2015 at 20.00, at AASSM. 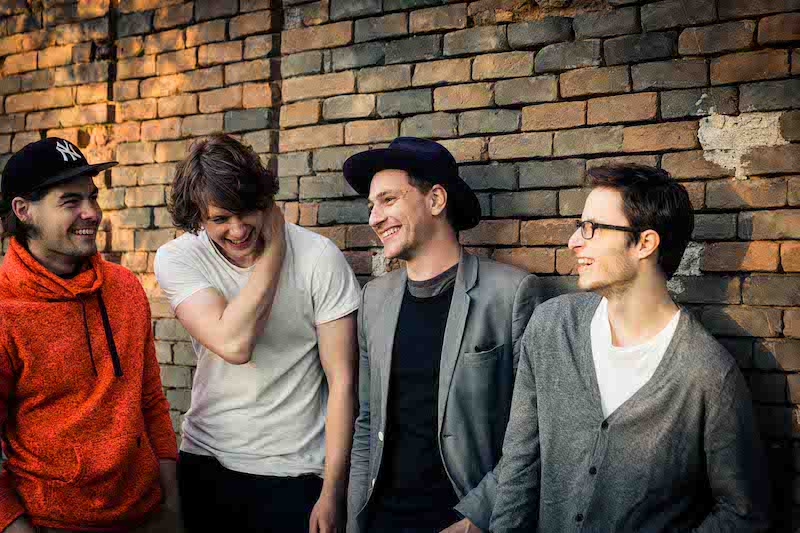 Purple Is The Color (Photo: internet/unknown)

Fly Magic, which consists of four musical improvisation artists, different musical styles and the explosive intersection of cultural diversity, will give the last concert of the 26th Izmir European Jazz Festival in the AASSM Small Hall on 19 March 2019, Tuesday at 20.00. Fly Magic which consists of Timo Vollbrecht (saxophone), Elias Stemeseder (piano & synth), Bernhard Meyer (bass) and Sebastian Merk (drums) will present their new album “Faces in Places” in their concert which cooperated with Goethe Institute Izmir. Faces in Places tells the story of Fly Magic’s encounters with 10 people they meet while on tour around the world. 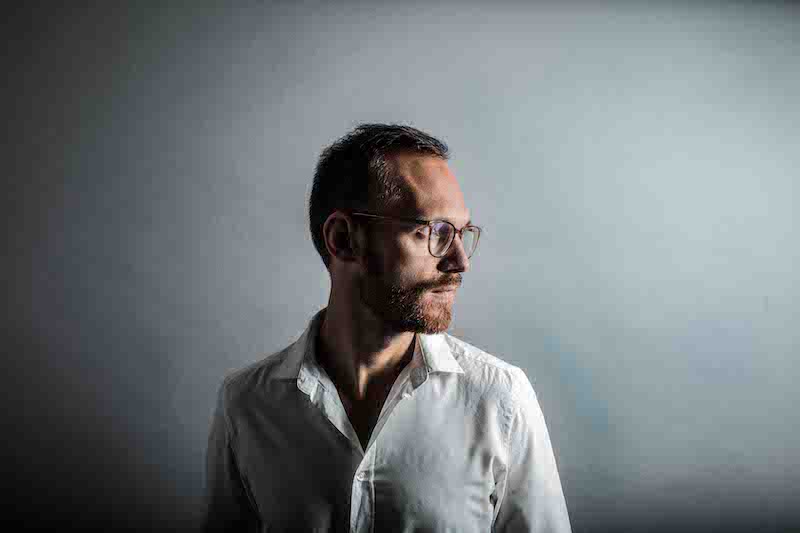 The 26th Izmir European Jazz Festival will provide free side events for jazz music audience of all ages to show magic side of jazz.

Yiğitcan Çakar, who graduated from Dokuz Eylül University Fine Arts Faculty Graphic Design Department, won the 17th Jazz Poster Contest which organized to determine İKSEV’s 26th Izmir European Jazz Festival poster. Seda Yüksel who graduated from Mimar Sinan Fine Arts University, Department of Graphic Design, got the second place. Moreover, the third place was given to the poster of Sevda Kaçtı, a graduate student of the Graphics Department of Anadolu University. Esra Aslan whose poster “Jazz Trilogy” received the Special Jury Prize, is a student at Marmara University Fine Arts Faculty Graphic Design Department. 39 posters, which got the chance of exhibited, will be at AASSM Gallery between 2 – 20th March 2019.

Izmir Foundation For Culture Arts and Education (İKSEV) will organize “Write Stuff” which is on jazz writing for journalism students within the scope of the 26th Izmir European Jazz Festival which will be held between 10 – 20th March 2019. Workshop will be held by Ümit Tuncağ and Sirel Ekşi.

Saxophonist Gianni Oddi and pianist Alessandro Bonanno, who participated in the 26th Izmir European Jazz Festival with the collaboration of the Italian Consulate in Izmir, will perform with the young jazz musicians at İKSEV on 5th and 6th March 2019. Jazz Virtuoso Duo and their students will perform Jam Session at AASSM on 6th March 2019 at 19:30.

The Lindy Hop Workshop will be held at IKSEV with the cooperation of Swingin’ feet İzmir on Saturday, March 9, 2019 and will embrace all ages of dance enthusiasts. Master Hoppers will dance with those who love and want to learn this dance. The aim of this workshop is to feel the music, move our body in harmony with the music and spend a pleasant time.

Publik Market which aims to bring together local manufacturers, craftsmen, designers, artists with communities, supporters and institutions, will held on March 9, 2019, between 13.00 – 19.30 at Edit & Chill. Publik Market, which is part of the 26th Izmir European Jazz Festival, will bring jazz music and design culture to the streets. 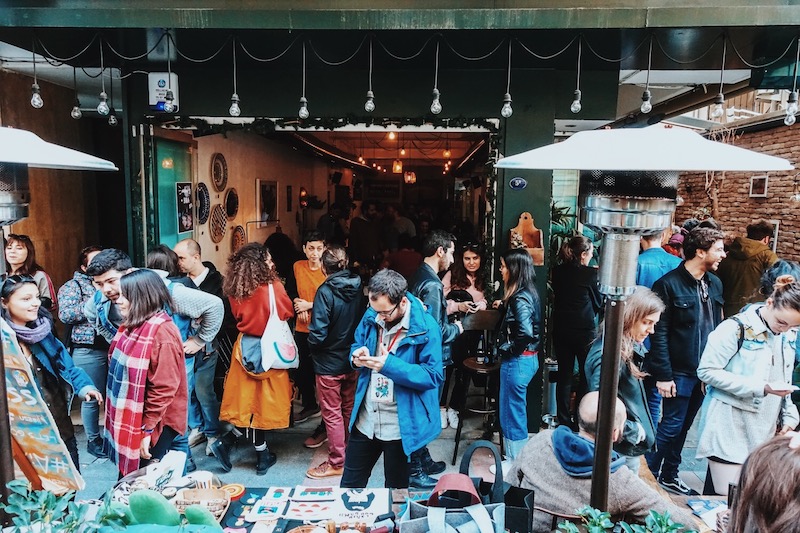 The 26th Izmir European Jazz Festival will open its stage on Saturday, March 9, 2019 to the students of Yasar University which is the only university in Izmir to offer jazz education. Yasar University Jazz Ensemble which is conducted by Timuçin Şahin, will perform at AASSM Small Hall at 19.30.

The traditional seminar of the 26th İzmir European Jazz Festival will be given by Timuçin Şahin, a composer, guitarist and trainer. Şahin, who has outstanding recognition in the world jazz scene, will talk about the innovations brought by 2 sound revolutionaries to the 1950-60s. The seminar will also cover “New York School” which consists John Cage, Morton Feldman, Earle Brown and Christian Wolf, and the process of revitalizing the improvised elimination of classical western music for more than 150 years. Moreover, there will be an analytical music listening session. The seminar is open for everyone and will be held on 11th March 2019 Monday at 19.30 at İKSEV.

Michel Petrucciani, the most extraordinary pianist of the world jazz scene, will be remembered at the 26th Izmir European Jazz Festival in the tenth year of his death. Director Michael Radford’s 2012 documentary will be screened at the Institut Francais Turquie Izmir, on March 13, 2019 at 19.30. Entrance will be free.

Timo Vollbrecht – Fly Magic who will participate in the festival with the cooperation of Goethe Institute Izmir, will make a workshop between 10:30 – 13:00 on Thursday, March 20, 2019 at IKSEV.

The 26th Izmir European Jazz Festival tickets will be available on Biletix from Tuesday, February 19, 2019.

We Lost Joey DeFrancesco at a Very Young Age