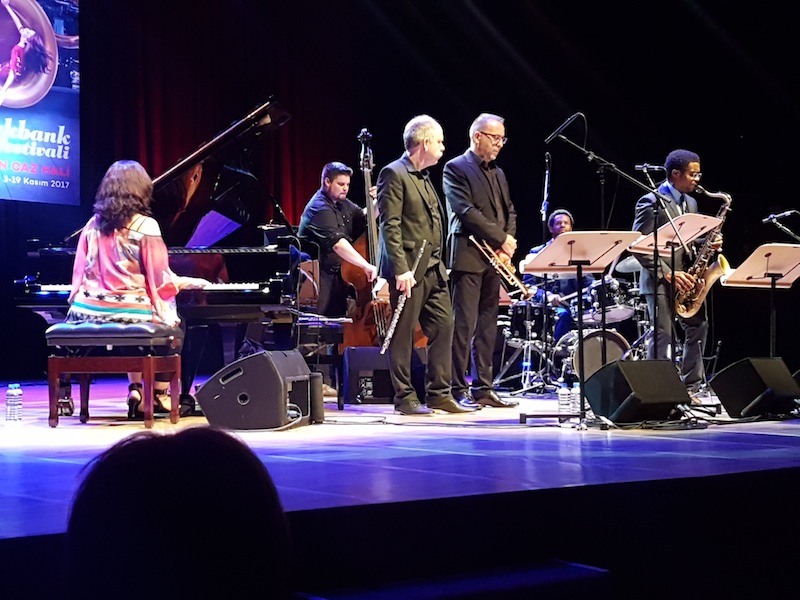 I drove towards melancholic Atatürk Cultural Centre, which might be living through its final days, as I shouldered the responsibility of deciding “which concert to go to” once more as all the participants of festivals with rich line-ups also lived through with the 27th Akbank Jazz Festival in full swing. Taksim has changed so much that more than enough comments to fill books might be done on this subject, let alone the disillusion of it being more livelier than its older days. Especially after seeing the old and lovely photos of Taksim and Beyoğlu, the lonely and dark streets and the sad sidewalks filled with too many people, without spotting a car or a tree… I don’t usually travel to the European side other than to see my family and to visit our second home, Nardis Jazz Club in Kuledibi, so I hadn’t noticed what a slap in the face this “transformation” felt like. Atatürk Cultural Centre and its current situation is a thesis subject by itself.

However, Akbank Sanat on Istiklal Street, which has succeeded in persevering through this transformation through closely following the change physically, was hosting one of the best concerts in the festival on the evening of the 11th of November.

Benedikt Jahnel, known also as a mathematician as well as a successful jazz pianist (Jahnel is working on Probability Theory and Gibbs Hypothesis at Ruhr University in Bochum), is a successful representative of the ECM wave. He has worked with legendary musicians such as Johannes Enders, Charlie Mariano, Wolfgang Muthspiel, and John Abercrombie, releasing his first album “Modular Concepts” through Material Records in 2008. Jahnel then released his two ECM albums (“Equilibrium” in 2012 and “The Invariant” in the beginning of 2017), which were produced by Manfred Eicher, gaining widespread popularity and respect. Of course, double bass player Antonio Miguel and drummer Owen Howard play a big part in this success. However, in his concert at Akbank Sanat, Jahnel sought the help from “locals” and was accompanied by his old German friends he has known for many years.

I have always liked piano trio albums, because I have started to listen to jazz after listening to a piano trio album (Kerem Görsev – “Orange Juice”) and I was taken aback in awe by the harmony and ‘respect’ between the instruments. I don’t remember how many times I went to piano trio concerts, but I realized how special and insatiable the love and strong bond between the musicians once more after attending Benedikt Jahnel Trio concert at Akbank Sanat. We had a great evening, listening to pitch black and shining white notes like clockwork, and even though where they were headed was more or less obvious, their originality was still without compromise. The only bad aspect of the concert for me was to have to leave after the first set, but I and Feridun Ertaşkan from Cazkolik, whose deep knowledge about jazz music has been a great source for me, agree on one detail: Benedikt Jahnel Trio was like a medicine for the wary souls after Wolfgang Muthspiel concert was cancelled. My personal opinion is that such a band with such great music would give a sold-out concert at a bigconcert hall like Zorlu PSM Main Stage.

Cemal Reşit Rey Concert Hall, located right next to Lütfi Kırdar Congress and Exhibition Hall, in which our elders would watch basketball games in their youth, was opened in the March of 1989 and has hosted classical Western and Turkish music concerts, as well as all other colors and genres of music. It embodies ensembles like CRR Istanbul Symphony Orchestra, CRR Big Band Jazz and CRR Strings Soloists. CRR Concert Hall has hosted Amina Figarova Sextet on the 12th of November, Sunday. Born in Azerbaijan, Amina Figarova received her classical music education in Baku Conservatory at an early age before proceeding to studying jazz at Rotterdam, Codarts, and then the world-famous music school Berklee, and stepped into this new world. We learnt that this was the first time that Figarova has visited Istanbul. She was accompanied by a strong band of musicians: Ernie Hammes on the trumpet, Morgan Guerin on tenor saxophone, Figarova’s husband Bart Platteau on the flute, Marcos Varela on the double bass and Kenneth Salters on the drums.

We were guessing that she would perform pieces from her album “Blue Whisper”, which was released through the independent German music company In + Out Records. I think Amina brought a big evil eye bead in her purse because some things went wrong to bring the spirits down in the beginning of the concert: The delay caused by the 39th Vodafone Istanbul Marathon (!), the fact that the soundcheck had to be kept short due to this delay and that the sound of the instruments could barely be heard by the audience until the end of the third piece, that the double bass sounded muddy which caused Bart Platteau to go over to the CRR sound engineers in order to help. I am guessing the band was able to restore the balance only after the 4th piece, and they made the surprising decision to perform mid-tempo pieces until the very end of the concert, leaving the up-tempo pieces to the very end. It was thought-provoking to see many members of the audience leaving without listening to the encore. I enjoyed “Hewa”, “Blue Whisper” and “Sneaky Seagulls” (last one is from the 2012 album ’Twelve’) the most and I will remember these pieces. 20 years old Morgan Guerin kept receiving more and more applause after his every solo, we should follow his work closely!

I thought Amina Figarova, who reminds me of Carla Bley and Maria Schneider for some reason, gave a successful performance despite the negative aspects, and I will be waiting for her next performance in Istanbul as well as her future projects in excitement.