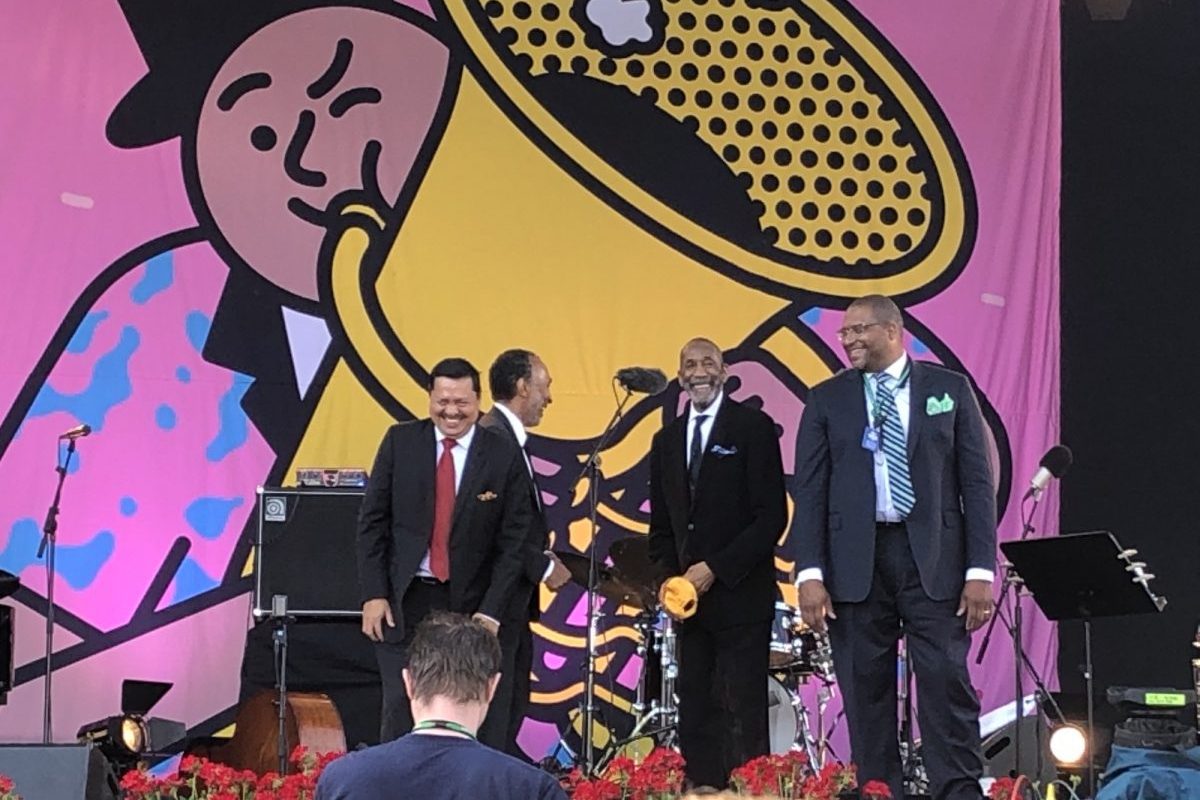 I returned home with great memories after attending the 54th Pori Jazz Festival. 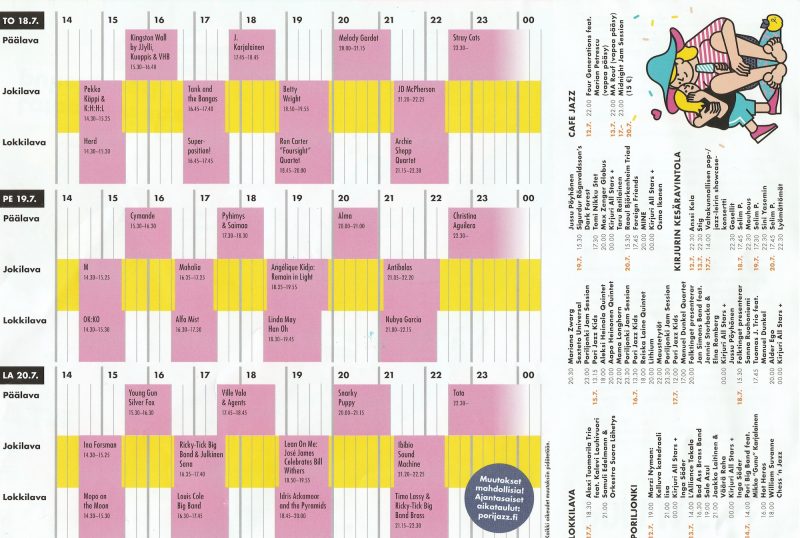 Ron Carter Quartet performed on one of the open air stages, which was full due to the great weather this year, on the 18th of July. Ron Carter is one of the most famous jazz bassists of all times. He turned 82 in May and is best known for his work during 1963-68 when he played with Miles Davis at his legendary Quartet recording immortal albums such as “Seven Steps to Heaven”, “Miles Smiles” and “Nefertiti”. During his long career Carter has played over 2 200 studio recording sessions entitling him as the most recorded bassist in jazz history. This American musician has versatile career and has released several albums under his own name. Carter last performed at Pori Jazz back in 2001 and this summer he brought along his quartet featuring pianist Donald Vega, saxophonist Jimmy Greene and drummer Payton Crossley. Ron Carter, Donald Vega and Russell Malone performed at Nardis Jazz Club in 2014. The concert’s playlist written by Carter himself can be seen below.

Archie Shepp Quartet performed on the same stage an hour after the Ron Carter concert. It was the most exciting concert for me during the festival.

Saxophonist Archie Shepp is a living jazz legend. He began his career in the 50’s and rose to stardom while playing with Cecil Taylor, John Coltrane and several other noteworthy musicians. Shepp became known as a radical artist and an avid experimentalist of different genres and new waves. He also commented political and social issues on regular basis. Later on he introduced some softer aspects within his career as his venturesome free jazz has made room for ballads, bebop and blues. Archie Shepp first performed in Finland at Helsinki Rowing Stadium back in 1962. He’s never played at Pori Jazz before so at 82 years of age, it’s about time that he made his debut at Pori Jazz at the legendary Lokki Stage. 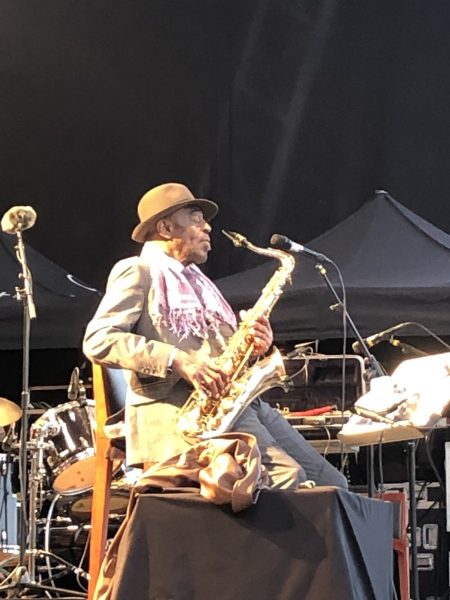 Lineup:  Archie Shepp (s, vo), Carl Henri Morisset (p), Matyas Szandai (b), Steve McCraven (d). The playlist is below in their own handwriting. 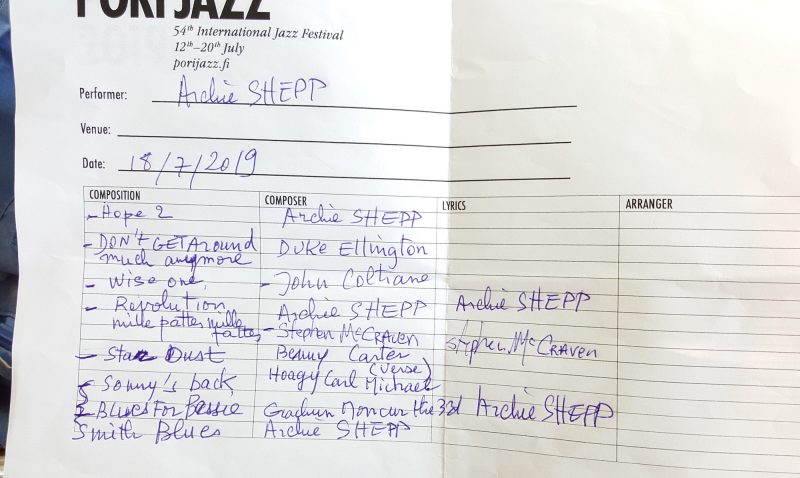 Friday was a hot day in Finnish standards (19 degrees Celsius), and female bassist Linda May Han Oh and her band were the most memorable among the three concerts I listened to during this lovely day.

During the past couple of years, Linda May Han Oh has become one the most hard-working bassists on the international jazz scene. Born in Malaysia, raised in Australia and currently residing in New York City, she is known among other things as Pat Metheny’s bassist of choice. In addition, Linda May Han Oh collaborates with e.g. Joe Lovano, Vijay Iyer and Dave Douglas who brought her to perform in Pori nine years ago. However, this was Oh’s maiden voyage to Finnish shores as a leader. The current release Aventurine is the artist’s most ambitious undertaking so far. 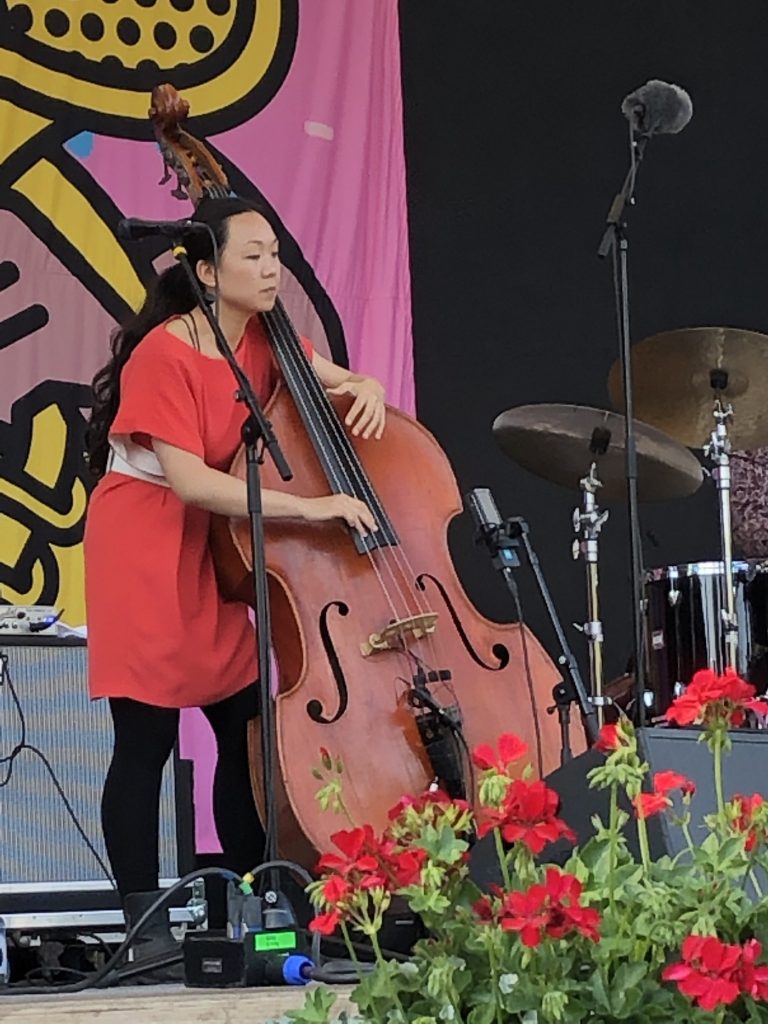 The last two days of the festival was sold out. On Saturday, Snarky Puppy and Toto gave concerts. I know that Snarky Puppy made a bang at Istanbul Jazz Festival. Band’s bassist, Istanbul-lover Michael League told the 70 thousand members of the audience that “I know most of you came for Toto, I am dying from excitement as well. I thought they wouldn’t come but right now they are listening to us from the backstage.”. As a reply to this elegant statement, Steve Lukather, one of the founders, guitarist and soloist of Toto called three wind instrument players of Snarky Puppy to the stage to play Rosanna. This was the most unforgettable moment for us during the concert.

American band Snarky Puppy is one of the biggest phenomenons in the jazz circles within the past five years. Lead by bassist-composer Michael League, the collective consists of over 30 musicians of which the performing touring party is usually 8-12 persons. Though fusion jazz may not have been the most trendiest music genre lately, Michael League and his highly talented companions have managed to impress both the audience and the critics with their visionary style and irresistible performances. One of the biggest factors in their success has been making use of social media marketing, as they’ve built enthusiastic fan base on YouTube and other mediums. Snarky Puppy has performed at Pori Jazz back in 2014 and 2016. They released a new album in spring, so one could expect both old and new music at their concert. 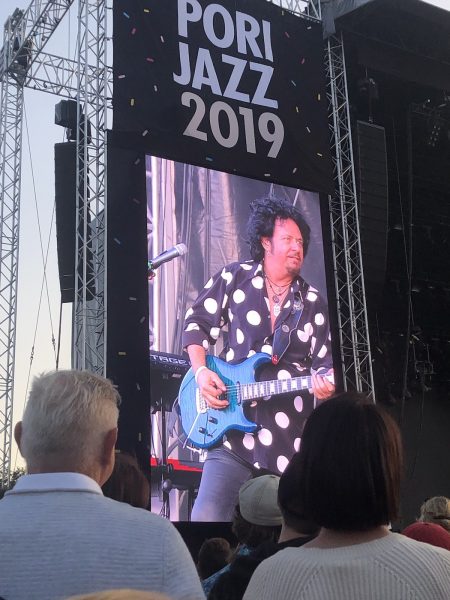 Renowned American band Toto returned to Pori Jazz where it first performed back in 2010. Toto is known for its several hits such as “Africa”, “Rosanna” and “Hold the Line” and has released 17 studio albums over five decades. They’ve sold more than 40 million records worldwide. Their Greatest Hits package titled 40 Trips Around the Sun including three brand new songs was released in February 2018. The album was followed by vast world tour featuring among others sold-out concerts at the Ziggo Dome (audience capacity 17 000) in Amsterdam and Royal Albert Hall in London. Recently Toto has gained new fans from younger generations as their practically evergreen hit song “Africa” released back in 1982 has summed up to over 455 million listeners in Spotify. This summer Toto toured Europe for a month and the last concert was at Pori Jazz on Saturday, July 20th.