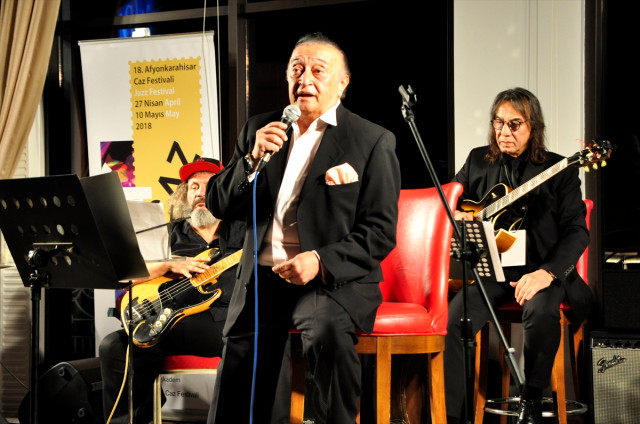 18th Afyonkarahisar Jazz Festival will take place between 27 April-10 May 2018.

Afyonkarahisar Jazz Festival, whose art director is Hüseyin Başkadem, prepares to host famous jazz musicians. The festival will take place between 27 April-10 May with the support of Ministry of Culture and Tourism and Afyonkarahisar Municipality. There will be 70 musicians, both from Turkey and abroad, participating. The opening concert will be performed by composer musician Ömür Göksel and Ankara Metropolitan Municipality Big Band. Ömür Göksel, who gained popularity especially in the 1970s with his songs ‘Ağlıyormuşsun’, ‘Umurumda mı Dünya’ and ’Kızım’, will receive Jazz Festival Honorary Award for his contributions to jazz music.

The festival will last for 10 days and host prominent European jazz musicians such as Erich Ciompa, Tereza Krippner and Kristina Riljakova as well as Ece Dorsay, Zümrüt Alieva and Makaew Duo. Luxus is worth paying attention to with their unique ‘Oriental Blues’ style which fuses tango, blues and Balkan music. Pianist Aleksandr Mekaev, who received the Grand Prix Award during the ‘Dominico Calucci’ International Music Competition in Italy in 2015, will share the stage with young violinist Peter Mekaev.

Rising star of Czech jazz, Erich Ciompa Trinec, will be accompanied by well-known European drummer Ivan Ades, who performed in famous musicals like West Side Story and Evita. Ades is also known for his work with famous musicians like James Moody, Tony Lakatos and Viktor Mendoz. Young vocalist Kristina Riljakova is another known Czech musician who will spice up the festival with her unique voice and striking performance. The musician is the vocalist of Karlovy Vary Symphony Orchestra and she will perform funk, pop and jazz pieces during her performance.

Afyonkarahisar Jazz Festival will also host a variety of events and activities. A group of esteemed artists, writers and journalists which includes names such as Atilla Dorsay, Yalvaç Ural, Asuman Kafaoğlu Büke, Aydın Büke, Hülya Tunçağ, Ali Yılmaz, Nadir Ede and Filiz Ediger will visit elementary and high schools in Afyonkarahisar and talk to the students about music, cinema, literature and painting.