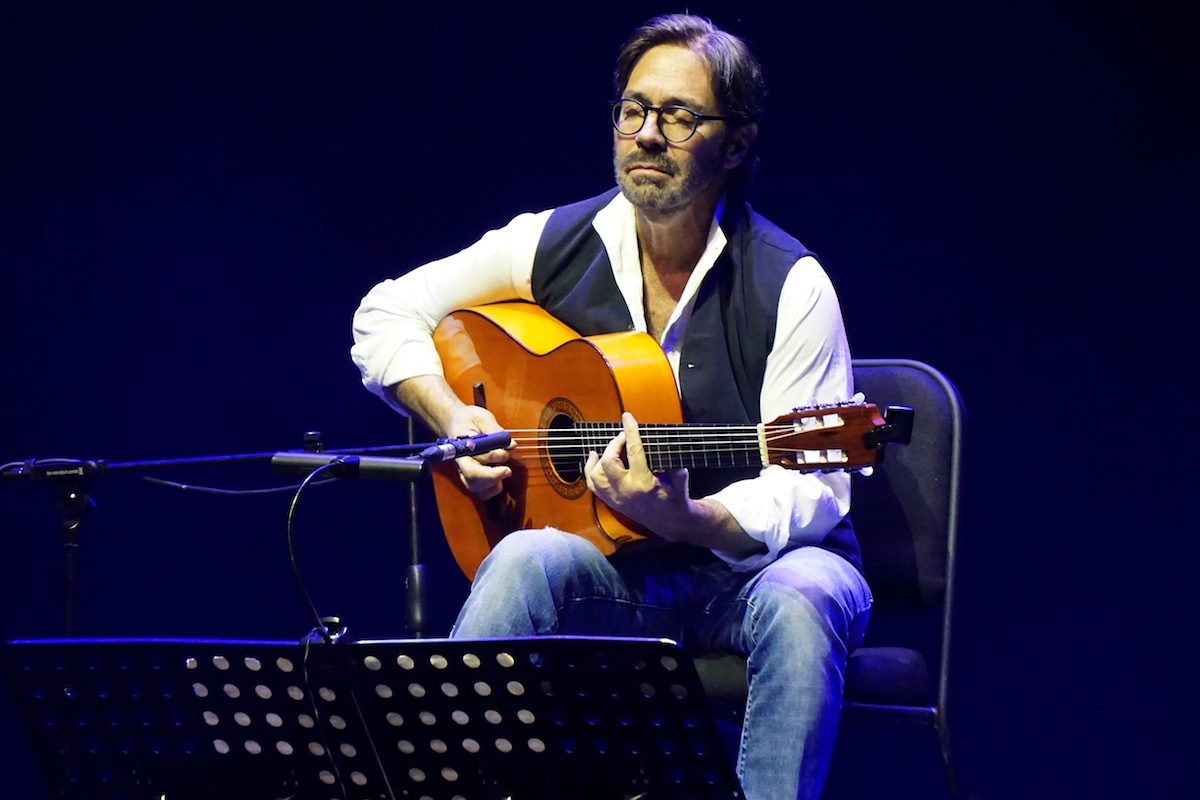 In the last few years, due to security reasons, it has become hard for people or groups practicing any branch of the arts, music or others, to visit our country with an enthusiastic and excited attitude. We follow the musicians or bands who will perform in the festivals closely, try to learn about their touring plans, follow their personal websites for information on the countries included in the tours of their albums, following the album’s recording and release. We scan the list quickly and hope to see the cities of Turkey among those written, hoping to see at least one of our cities…

Al Di Meola’s place in the heart of the Turkish audiences is different though! Di Meola expressed his feelings for Turkey in his piece “Istanbul” from the 1998 Telarc album “The Infinite Desire” and he was vaguely winking at us again with “Race with Devil on Turkish Highway” from the same album. We can remember this piece’s older brother “Race with Devil on Spanish Highway” from Di Meola’s jazz-rock and fusion album “Elegant Gypsy” which was released by Columbia in 1977.

Al always makes his listeners smile after his albums, because we know that this means “the day of his arrival in Turkey is approaching”. I think his latest album “Elysium” is a simple, acoustic and soft album without any involvement of electric bass or double bass. Di Meola met his music lover audience in Cemal Reşit Rey Concert Hall for “CRR 3rd Jazz February” concert series in the beginning of the year during the world-wide tour of this album. He showed us his love for Turkey once more during his concert on this beautiful evening or guitar and drums without giving too long of a break between his visits. 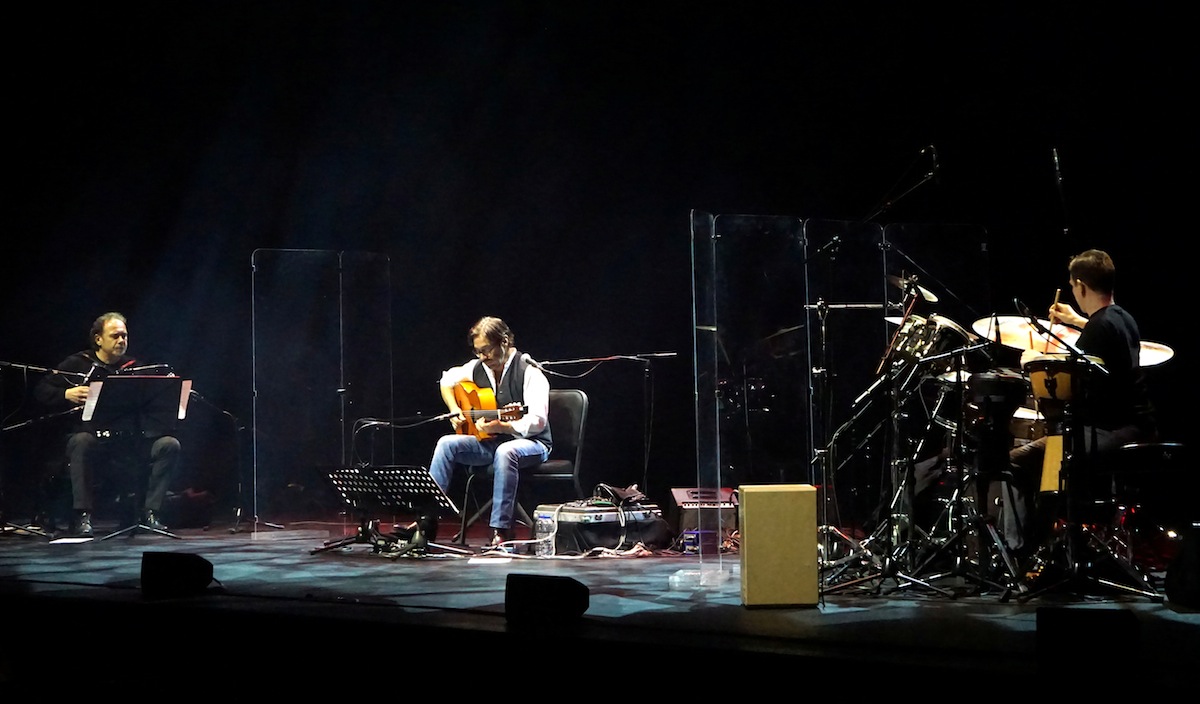 Zorlu Performance Arts Center (Zorlu PSM) is known to bring examples from every branch of the arts for the art lovers’ enjoyment—especially those living in Istanbul. The venue was opening its doors wide open once more for the Al Di Meola concert. The audience gathered in the foyer early before the concert, that was to take place on the Main Theater. I was there with my friend Selin Çelik, who is also a writer for jazzdergisi.com, to share this pleasant experience. The first time I saw a performance on the Main Theater was when I saw Phantom of The Opera with my wife. Many artists performed on this main stage since then and now it was Di Meola’s turn. He promised the audience “a taste of different things” by adding  “& More” to the name of his album “Elysium” and was accompanied by Fausto Beccalossi on bandoneon and Peter Kaszas on the drums. The fact that Di Meola was going to be accompanied by a bandoneon player, instead of a second guitarist as in CRR, signalled to me that the evening was going to be exciting.

I thought that this performance by a famous guitar virtuoso would attract the attention of young and prospective guitar players, however; the audience mainly consisted of middle aged or older members and, as I observed, Al Di Meola fans.

I have to admit; nobody can prove to me that Di Meola, who was greeted by the enthusiastic applause of the audience the moment he came on the stage, is 62 years old even if they bring me his birth certificate! Meola proved that there is a direct relationship between talent and health, and I can easily say that his success comes both from his strict practice discipline and the fact that he takes care of his health and form. Meola reached for the microphone as soon as he got on the stage and told that he would paint our evening in different colors with pieces from Elysium with the addition of some other pieces. He received great appreciation from the audience with this explanation, even before he played his first note. 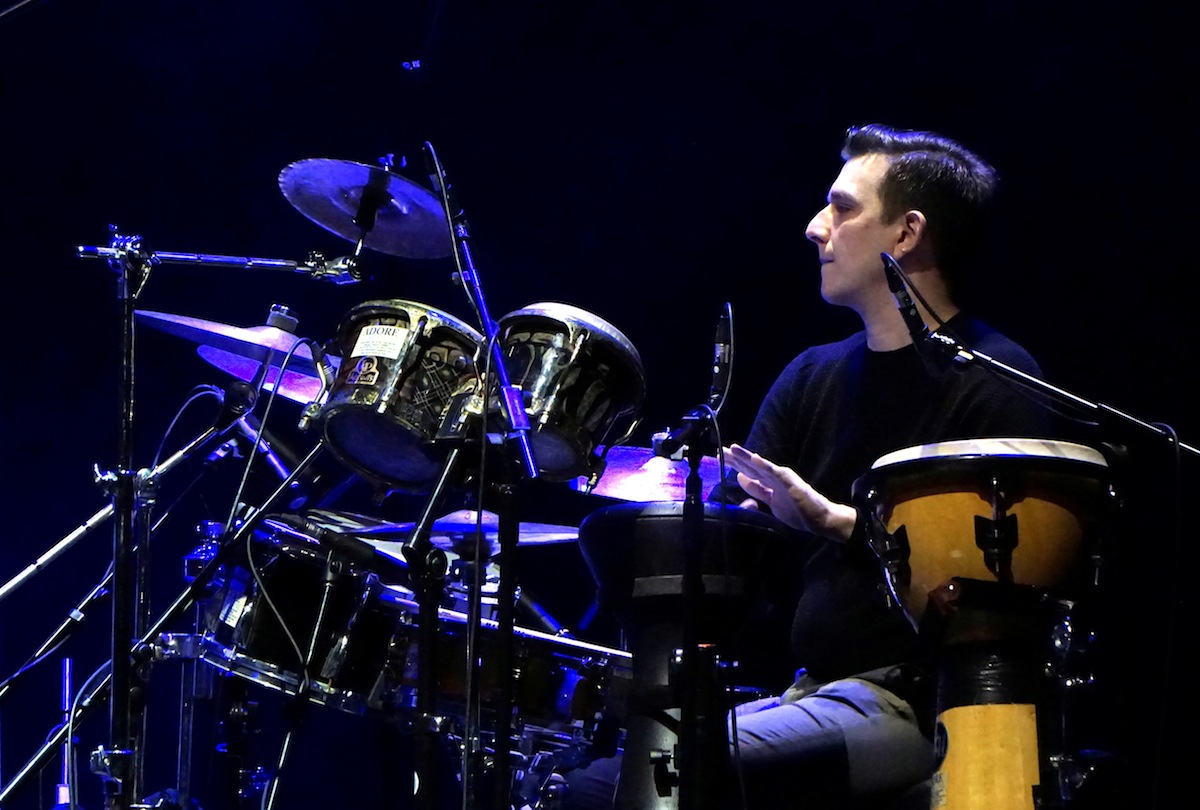 Al started the concert with “Misterio” from his 1991 Tomato label World Sinfonia series, and from ‘World Sinfonía III – The Grande Passion’, which was the third album from his 1998 Telarc series. He reminded the audience that this was the first time this piece, normally played symphonically, was being played by a trio. The concert started off great with this piece, but Meola’s displeasure could be read from his face—his “conflict” with Peter reflected on his playing. The sound-check for the concert started at 19:00, and lasted for two hours before the curtains opened. The musicians were unable to hear each other properly right from the beginning despite this fact, and this brought the sound system of Zorlu PSM, one of the best concert halls in the country, to a questionable spot. The way this problem on the first song was dealt with was open for interpretation. I believe that the sound system should be scrutinized as if “that event was to be professionally recorded” not only for jazz concerts but for any kind of occasion and in every event center. I am sure Zorlu PSM will focus on this more diligently the next time.

Our evening continued with the warmth of “Mawazine”, named after the Mawazine Festival that takes place every year in Rabat in Northern Africa and attended by millions of people (almost 2 million music lovers attended the event in 2013!). Mawazine is a symphonic piece like Misterio, and you can listen to another successful performance of this piece on Meola’s 2011 Concord album “Pursuit of Radical Rhapsody”.

“Esmeralda” was one of the most emotional song played in the first set, and this is a valuable piece that grows on you the more you listen to Elysium. We don’t know if Di Meola composed this piece thinking of the sweet Esmeralda from Victor Hugo’s famous The Hunchback of Notre-Dame, or another Esmeralda who entered his life at some point, but I believe that the piece successfully brought the passionate love we nurtured in our hearts or searched for into the light. 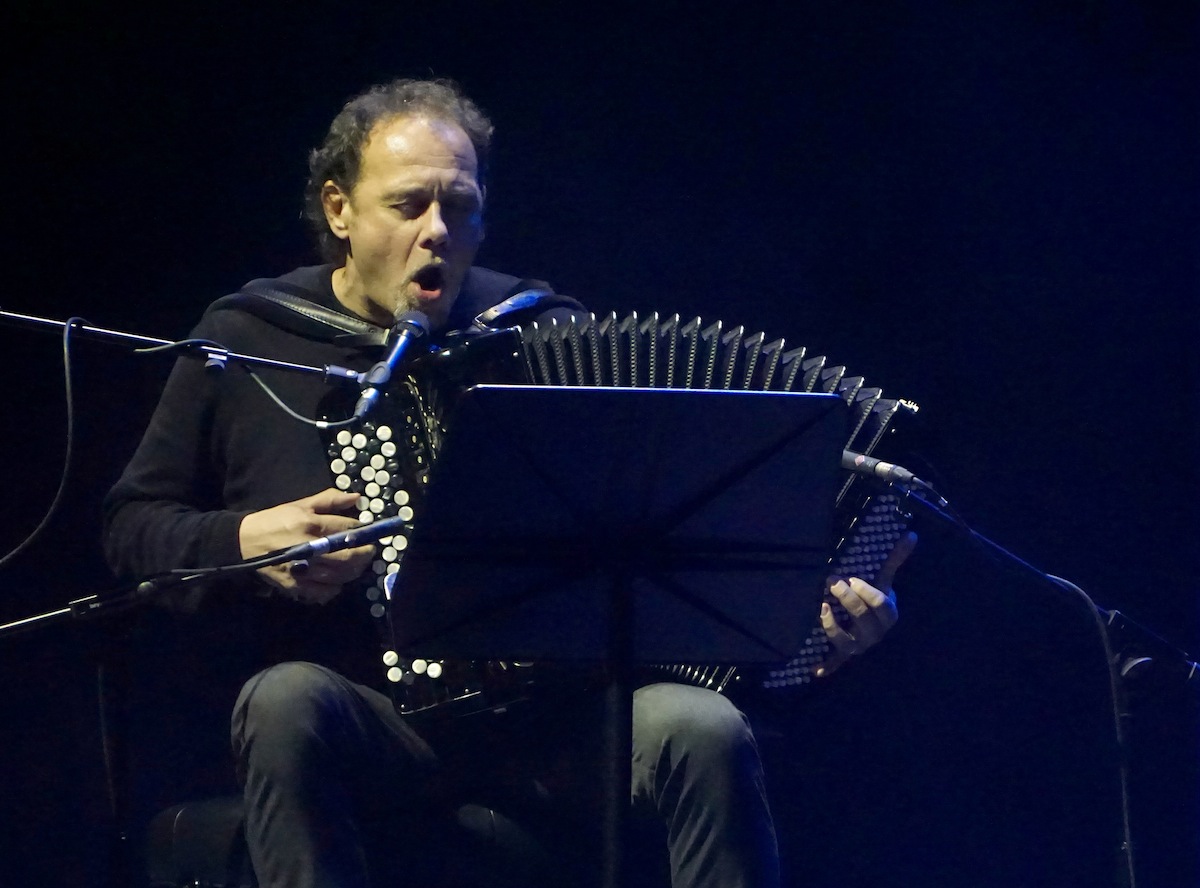 The first set continued with pieces similar to Astor Piazzola’s style, and the theme of Giuseppe Tornatore’s 1988 masterpiece “Cinema Paradiso” affected me the most among the pieces, so much that I was unable to hold my tears. I have probably seen this movie 3 times, so I remember losing myself in tears 3 times. Yes, you can ask me “Why are you watching the same movie 3 times?”, I am used to these kinds of questions. But once you hear this theme music composed by Ennio Morricone, once you love it, and especially after you hear it performed by Al Di Meola and Fausto Beccalossi like I did during this concert, maybe you will watch the movie once again and admire its music, and maybe you will find yourself silently crying like I did…

It was evident that the communication between Meola, Beccalosi and Kaszas became stronger when the second set started. The concert continued with Ceccalosi’s bandoneon solo, full of scat singing, following a short intermission of 15 minutes. I saw the audience in such a big concert hall pay full undivided attention to a bandoneon solo, with Latin, flamenco and even rock influences, for the first time in my life and felt really lucky to be a part of this.

Famous Argentinian bandoneon player Astor Piazzolla’s “Double Concerto” is a career-defining piece for Al Di Meola, and he played this in a memorable way. The guitarist then played two Beatles pieces that influenced his own music in a fundamental way: “And I Love Her” and “She’s Leaving Home”. Al recorded his album “All Your Life: A Tribute To The Beatles” three years ago and released it through the label Inakustik. This album is great for any Beatles lover who hasn’t heard Al Di Meola’s work before and want to, and those looking for an answer to the question “How does jazz-rock fusion sound?”. 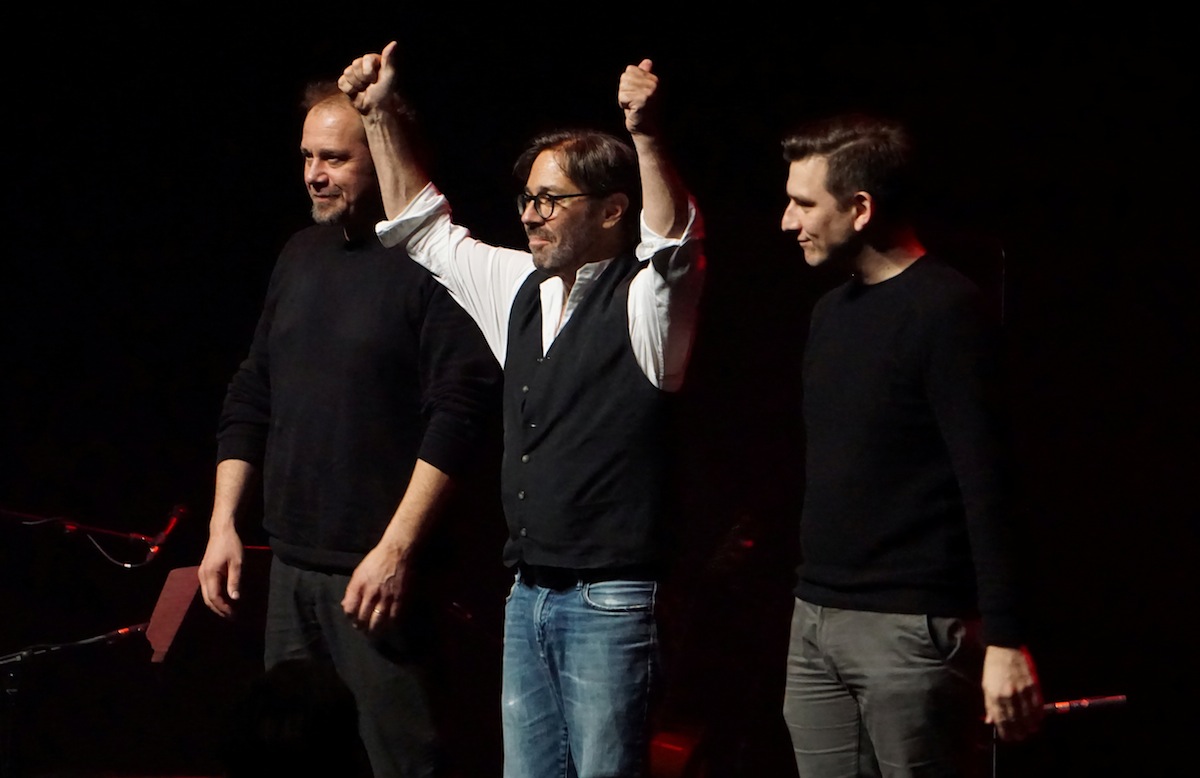 I researched the meaning of “Elysium”, the title of Al Di Meola’s latest studio album: There is information to suggest that it means “life after life” according to ancient Greek philosophy and religion, but the word means “complete happiness” for Al. During an interview he gave when the album was first released, he explains “My current feelings about life are exactly that right now and my music represents ‘the past and the present’, ‘the here and the now’”.

I was excited about finally being able to listen to Al Di Meola, who frequently visits our country, live for the first time and regretted the fact that it took me such a long time. I ended up watching a very special concert.

Al Di Meola became known through “Where Have I Known You Before”, the 4th album of Return to Forever—one of the pioneers of the jazz-fusion movement, and he spread his wings and took flight with his “Elegant Gypsy” album. I recommend his album “Elysium”, which was the main focus of his Zorlu PSM concert, to everyone.