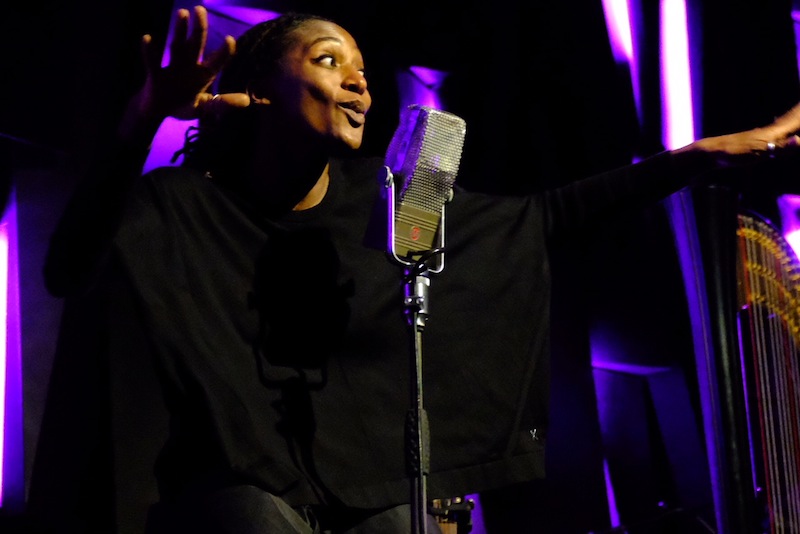 The Akbank Jazz Festival concert I was the most curious about was Ala.Ni’s, who is an English vocalist with roots in Grenada. I was very impressed by her unplugged and uncut performance videos I saw on the internet. In addition, her unique songs which tell of the 12 months of a love story have given me inspiration to write songs again. I simply couldn’t miss the concert of this woman who has helped me find myself.

However, there was a single weird aspect to the concert. It was set to take place at Babylon Bomontiada. A big concert hall. The noise level is usually high as well. How would Ala.Ni adapt to this environment? At the same time, I thought this place was chosen because a lot of people wanted to come. Ultimately I wasn’t confused for nothing. I was right. I will get to that in a bit.

I saw a harp when I entered the hall and we learnt from the staff at the door and from the general announcement made that the concert’s sound level would be low and a silence policy would be followed. Ala.Ni stepped on the stage shortly after, wearing a plain and black two-piece dress. She was accompanied by her guitarist and harpist. The concert hall was ruled by silence when the concert started and Ala.Ni’s unique and soft mezzo-soprano voice started to echo from the black crystalline walls of Babylon. Listening to this voice, a voice that wasn’t an imitation of someone, live was as exciting as looking directly at a painting by Leonardo da Vinci. She had the whole audience in the palm of her hand with her plain, silk-like voice and flexible body movements (she later on explained that she achieves this flexibility through relaxing her body with swimming exercises. She swam in the hotel’s pool before coming to the concert that day). 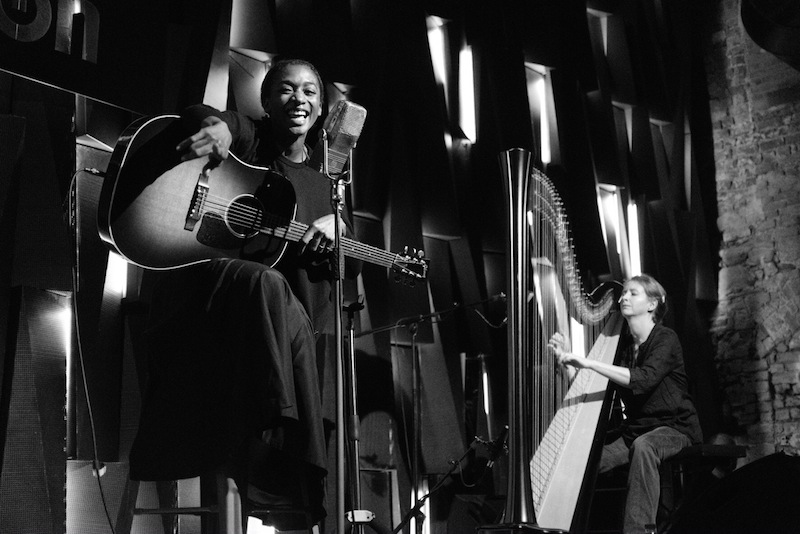 However, these magical moments were interrupted shortly after, because loud clanking sounds of cocktails being prepared filled concert hall from the bar at the back. Ala.Ni stopped the music in the middle of the song with a single hand gesture and asked the people working at the bar to be quiet, because the sounds they were creating were percussive and kindly explained that this concert didn’t need a fourth instrument. I think we didn’t hear anything louder than a beer cap quietly being opened after that point.

I actually do not particularly like hearing such warning from the stage, even if the artist is right. It isn’t that I find the artist wrong, but I think such announcements make the members of the audience—especially those who are listening to the music quietly and respectfully—tense for no reason and break their connection to the music. It is better when the staff takes care of such problems instead. For example, it would have been better if this problem was noticed and solved before the concert that evening. However, it obviously seems to be due to miscommunication.

Of course, it isn’t easy presenting acoustic concerts to such big audiences in Turkey. As you know, there are some people who take videos with their cellphones who then proceed to watch these videos with the sound on. They didn’t leave us alone during this concert either. However, Ala.Ni gave them such an explosive stare that they might have preferred to be cursed by the goddess Hera herself. Ala.Ni’s attitude changed into that of a teacher afterwards. For example, she said “You can thump out the rhythm with your hands, if you are doing it correctly that is” during one of her songs. She must have somehow heard that Turkish people are usually unable to keep up with swing’s tempo. If she had shown how to with her own hands, everybody would have imitated her and there would be no problem. So this attitude, as sweet as it was, tensed me up a little bit. But she sang so well two minutes later, all my unease melted away. We were back in her innocent and exotic world. Maybe back to the beaches of Cameroon where she first started to write these songs…

Ala.Ni sang her song “Darkness at Noon” while wandering around in the hall just like she does in her video. It was one of the most exciting experiences in my life, watching this black lady dressed in all black, walking in the dark like a beacon of sound. Ala.Ni truly is a creative character. She even released her albums in many different formats. I would suggest for you to research and keep marvelling.

Yes, the whole audience was putty in Ala.Ni’s hands, with her kind but firm teacher-like attitude, but don’t think that the audience was as meek as a cat the whole night. We were one with the music during 5 pieces. Ala.Ni made us imitate birds by whistling as we wished during the first one. An incredible sound matrix formed and it was in great harmony with the acoustic performance in the concert hall. Then the English singer sang 3 special improvization pieces. How? She was holding white papers half the size of A4. Every single paper had a word of a sentence in English written by the members of the audience. Ala.Ni split these papers into 3 decks and built completely new songs using the words written on these decks. As she started to speak out one word, and then let the paper with that word written on it go as she started the second one. As the words flowed out of her mounth, so did the papers from her hands like leaves in autumn. One even fell in between the members of the audience. These 3 pieces alone made this concert the most unique among all those in the festival. The fifth song the audience participated in was the encore. Ala.Ni used the call-and-response technique used during church masses. A girl from the back of the hall near the bar gave the first response. This girl shouted as bluesy responses as her high-pitched voice allowed and captivated the audience. She was waiting to get Ala.Ni’s autograph after the concert with a big smile on her face!

We took a memorial photo with Ala.Ni after the concert. Onno Tunç’s LP cover happens to be in the corner of this photo which I took with this music person who is my source of inspiration. Maybe this is a sign from the universe, who knows?