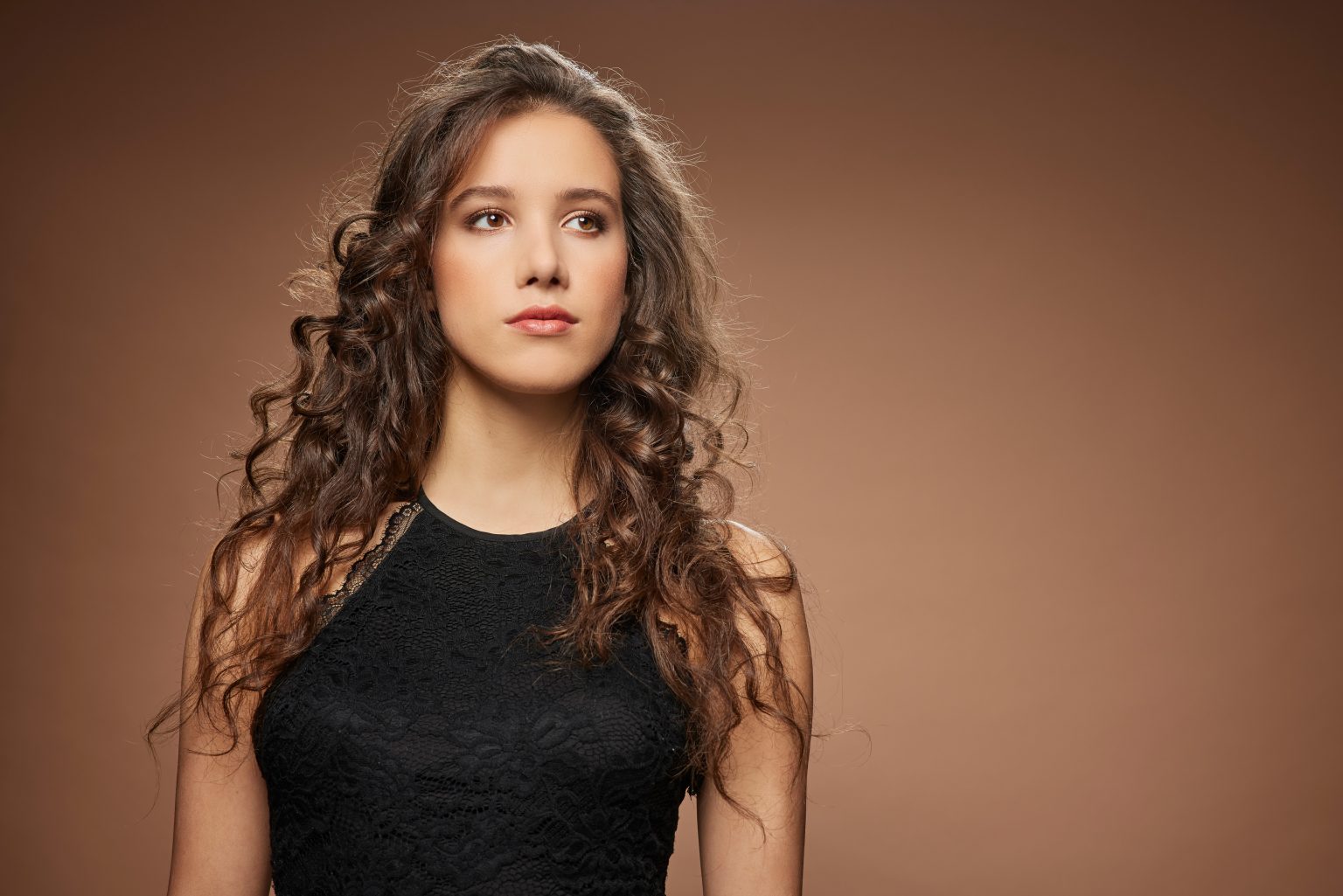 Alma Naidu grew up in Munich as the daughter of musicians. Father conductor, mother, Ann-Katrin Naidu, opera singer. She received classical piano lessons at the age of five, followed by the violin, from which she switched to the guitar at the age of 14. Training in classical singing, later in musical singing perfected her education. After finishing (2016) her vocal training in jazz at the Hochschule für Musik und Theater in Munich, she then spent a year at the Royal Academy of Music in London, studying with renowned singer and ECM artist Norma Winstone.

At the age of 15, Alma Naidu was already on stage as a singer, writing her own songs. As a soprano soloist, she performed a classical program in Munich’s Herkulessaal.

In addition to her jazz career, Alma has performed in various musical productions. A selection: “Rosaly – the girl made of glass” as Rosaly (Munich, 2016), “Highlights from Lion King” as Nala (Salzburg, 2017), “Lovemusik” (Musikalische Komödie Leipzig, 2018), “Jesus Christ Superstar” (Staatstheater Augsburg, 2019). In addition, she regularly performs as a soloist in symphonic concerts of film music in the halls of the Republic.

Resonance in the media and from jazz colleagues

Alma is one of the “most promising singers on the German scene” (SZ), the “German vocal discoveries of recent decades.” The press praises her many times, cultural institutions award her numerous prizes. The singer and composer has performed at the Nublu Festival New York and the Leverkusen Jazz Days, among others. Concert tours have taken her as far as India, Myanmar and the USA in recent years. She has shared the stage with Nils Landgren, Bobby McFerrin and Wolfgang Haffner, on whose album “Kind of Tango” (ACT, 2020) she can be heard.

Alma Naidu was awarded the BMW Welt Young Artist Jazz Award in 2021, in addition to the Kurt Maas Jazz Award. She received the Bavarian Art Promotion Award 2021 and is the first Grizzly Jazz Foundation scholarship recipient. 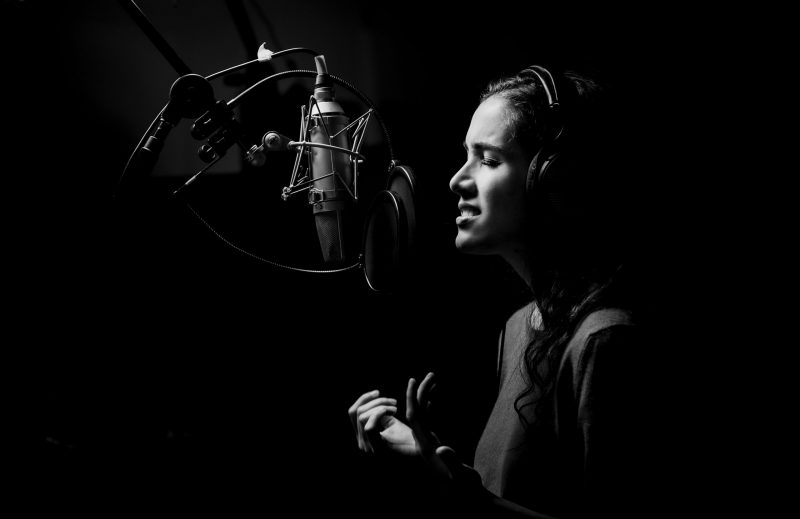 Naidu’s smooth, clear and moving interpretations of jazz standards such as “Body and Soul,” “You Don’t Know What Love Is” and “If I Should Lose You” in the tradition of “Old Soul” have captivated audiences in recent years: On her debut album “Alma”, her talent as an accomplished songwriter and sensitive lyricist really comes into its own: “I’m not just a singer. I wanted to make this clear with my first album”.

“I met Wolfgang in 2019 at the Burghausen Jazz Week. I sang the solo soprano part there on Duke Ellington’s “Sacred Concert”, and he led and played the session in the Burgkeller. I joined him there one evening and the musical collaboration started. Wolfgang’s musical approach, his motto that every note needs a meaning, one should take back the ego and put oneself in the service of the music, has influenced both me as a musician, but also my music a lot. Before we went into the studio, I sent him recordings of the pieces again and again, and together we thought about what could be changed – sometimes adjusting the tempo, sometimes leaving out a part.

Our musical ideas fit together very well; we’re both about breathing the music, floating and leaving space. I’m incredibly happy and grateful that our paths have crossed”.

Alma on her new album “Alma”:

“We recorded the album in December 2020. We were at Hansahaus Studios Bonn for three days and recorded 18 songs during that time, from which we then had the luxury of picking our eleven favorites.

I then did some more vocal recordings myself in Munich in early 2021 – my good friend Flo let me use his home studio for that. I recorded some of the backing vocals at home, and some were recorded by producer and singer Liselotte Östblom in London. I also worked with Liselotte on the lead vocals, she co-produced remotely via Zoom.

In the studio the core band consisted of Wolfgang Haffner on drums, Simon Oslender on keys and Claus Fischer on bass. Wolfgang had already played a lot in this constellation – I was also in Wolfgang’s band for a while and already knew them well. The band was perfectly tuned and of course they are all just great musicians. There were no rehearsals, the pieces were played once in the studio and then there were one to four takes per song, from which we then mostly directly selected our favorite. 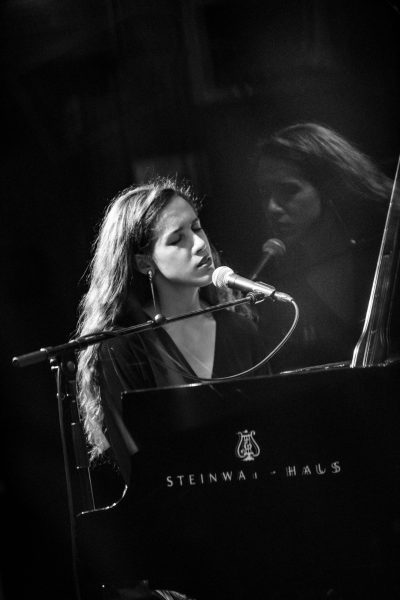 jazz-fun.de about the new album “Alma”

Alma Naidu enchants with her warm, extremely flexible voice. She conjures up images, changes moods and plays with the listener’s imagination. The album fits perfectly into the trend where artists do not position their records by a clear definition of style or genre. They offer musically what is most important to them emotionally.

“Alma” sounds beautiful in a way that evokes the warmth and intimacy of timeless jazz recordings. Presented with impressive mastery, the material may not fascinate on first listen. But with each successive song and each new listen, we involuntarily sink into a melancholic world enveloped by Alma’s pure as well as soulful voice, accompanied by a minimalist, unorthodox but absolutely contemporary-sounding acoustic accompaniment. In this sense, this is a unique work. It is completely original and uncompromising. Hard to find a good stylistic “pigeonhole” for it.

What will happen next? One thing is for sure: we are witnessing the birth of a star. The music of this album will stay with us for a long time. I am sure that even after many years we will listen to it with great pleasure.

Background
This article has come about in the context of a collaboration between several European jazz magazines, where female musicians are widely exposed under the headings WOMEN TO THE FORE and INTERNATIONAL WOMEN’S DAY.
Translation from English to Turkish by Toprak Şerif Gözden (Jazz Dergisi)