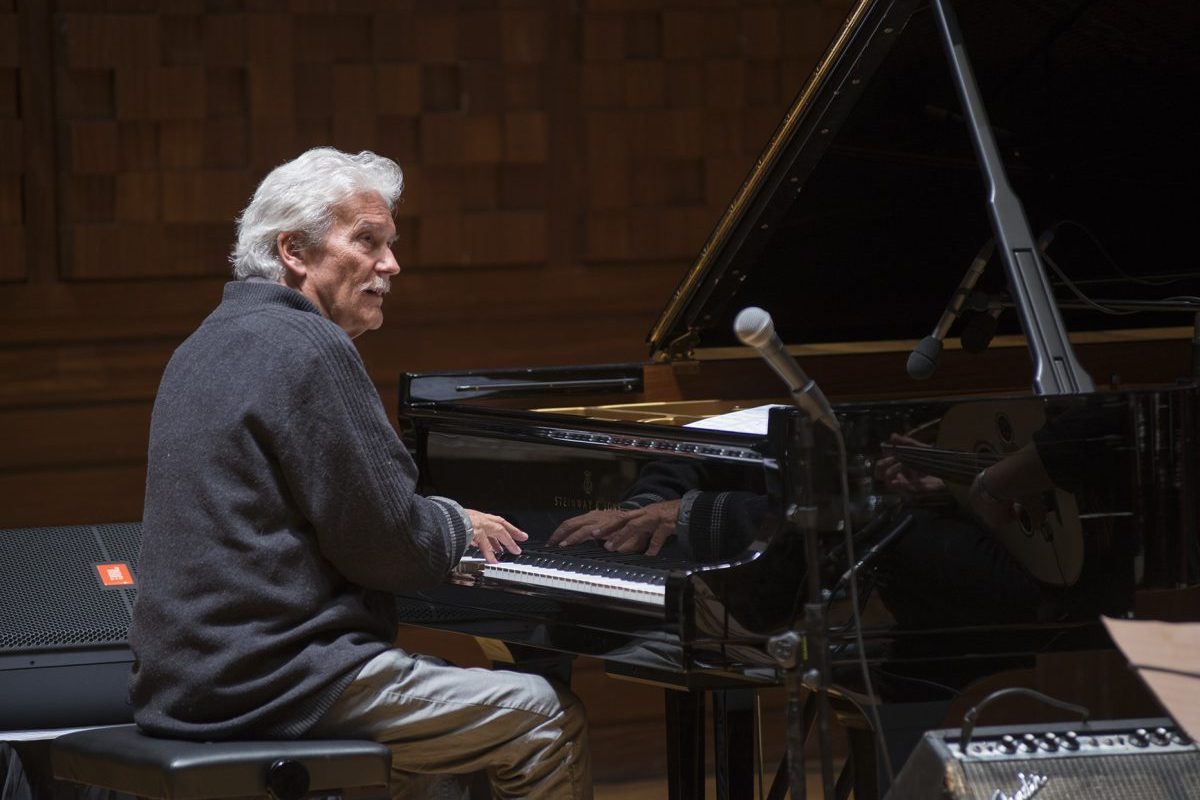 I found your channel on YouTube and came across the concert you gave at Montreux Jazz Festival in 1975. What caught my attention was that your stance, the position of your hands did not change at all. But of course you were like a Hippie, with a tank top and long hair?

Oh, it was fashionable back then. The way I use my hands might not have changed. But my sitting did. I was higher compared to the piano back then, I had intense back pain. I started playing the piano at 7. My teacher worked a lot on my hands.

I was about to ask that. I believe you studied at a conservatoire. How did you start playing the piano at an early age?

My family had a hotel in Switzerland. There was a piano in the lobby and works of masters like Debussy, Chopin and Ravel would play. My father occasionally would go overseas to promote the hotel. I would jump on the piano right away then. I would try to imitate whatever melody I was listening to. One day my father caught me and saw I was actually playing. He asked me “Would you really like to learn?”. And that is how I started. I was happy during the first few years of the conservatoire. The I realized I wanted to play Ray Charles, not Beethoven and told my father that I don’t want to continue. He respected my decision and brought over some recordings. Of course, there were no DVDs back then. I thought, why shouldn’t I compose as well, when I listened to them.

Improvization comes from childhood I believe. We improvize the most as kids.

Absolutely. Even now we are improvizing. We have words. We have sentences. We put them together. I am not reading my story out to to you. I have my own words to tell it. Even children who only know six words want to use them. But teachers prohibit this at school. You have to keep reading the story. Schools prevent improvization. It is hard to find it again afterwards. A lot of books and words tell the same story. You create and bring innovation when you are able to tell this story with your own words. Teachers aren’t aware how important this is for children. A single mistake can have many repercussions during the development of a child.

I think it is an excellent subject. I work with doctorate students in my own city, I teach them. There are small jazz clubs in Switzerland. I listen to your musicians there. The other teachers avoid that. It is important to listen to the youth. I see what I do and do not want to do there, I learn as well. 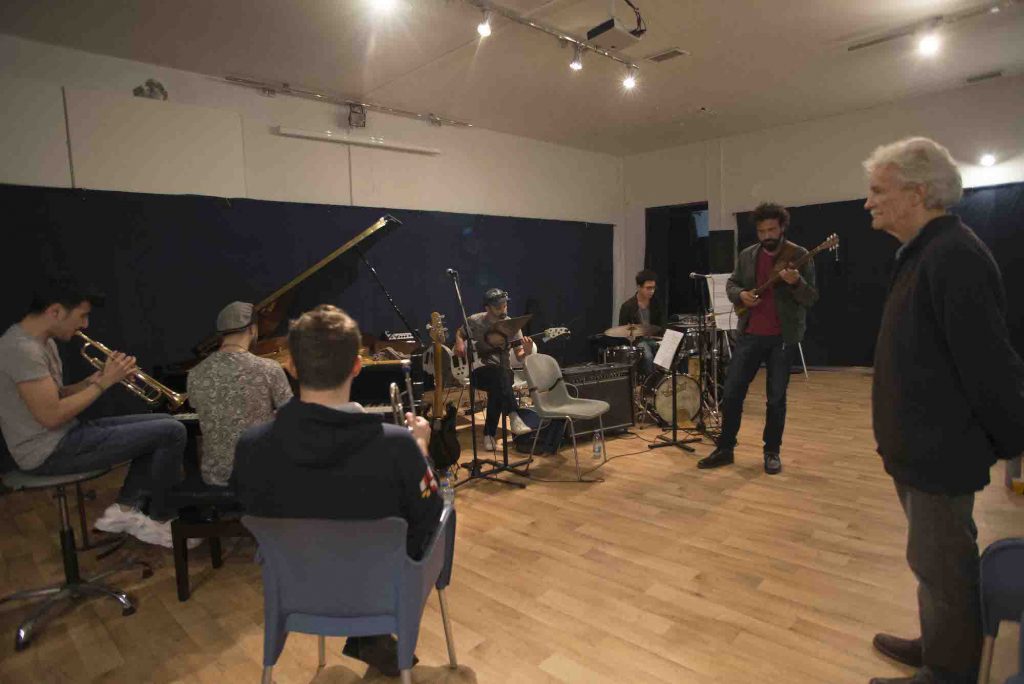 Coming back to that video, how did you succeed in becoming a professional at 25?

That was our first concert. But we would gather in small garages with friends before that, played on the streets or in churches. I practiced so I could tell something in front of people. One day my teacher told me that I couldn’t play every single note softly. You have to think that the audience is behind a corridor even if you have a thousand people in front of you. Don’t hit the notes. Feel the intensity. You can play a note strongly but you cannot play it loud. You have to think internally. This requires mental strength. I would lie down on the bed and imagine the concert the day before. I would imagine the notes in front of my eyes, how I would touch the key. You can think of this as a Buddhist meditation technique. Energy is such a powerful thing. I focus on this intensity after writing the notes.

I came across it your webpage, what is the story of your composition called Firuzağa?

The story of Firuzaga… My wife’s roots are Armenian. Her grandfather was an Armenian who lived in Üsküdar, Istanbul. He would cross the Bosphorus to go to the church and visit a church in Tophane, right next to Karaköy. They started there until the 1930s. They weren’t forced to immigrate because they had an international business and an office in Karaköy. But my wife’s father was very strict about Turkish people. He would not want stuff made in Turkey at home or want to hear anyone talking about them. That is why my wife didn’t want to visit Istanbul. She was born in Paris, and then they moved to Switzerland, but she had her own prejudices. We usually travel during my birthdays. I bought tickets to Istanbul for the both of us. She did not speak a word in the plane, none in the taxi or the hotel. We slept and I realized she was gone when I woke up. I went to the reception right away and asked. “She left early in the morning” they replied. I asked “Did she have her bags?”. “No” the receptionist replied “She left without anything”. I went upstairs and checked her bags. She came back a few hours later, we sat on the terrace. “You know François,” she said “It feels like home. The smells in Sultanahmet was just like in my mom’s kitchen.” What was the question? Ah yes, Firuzaga… We bought a house there afterward. We lived there for seven years. I still visit. Sometimes for three months, sometimes for a week, it depends.

I didn’t think you would end up buying a house at the end of the story! What resonated with you about Istanbul?

I knew a Jewish musician who lived here, my roots lie there as well. We saw and bought the house thanks to him. Firuzağa is a lovely neighbourhood. Our house is beautiful as well. You cannot buy such a beautiful house for such a price in Switzerland.

You go down to Tophane, there are music studios. I don’t particularly love Istiklal but there are tiny streets that lead downwards. I really enjoyed buying gear in Karaköy. I could find anything I wanted, to fix or mend things.

I like listening to the sounds of the city. The preacher singing, performing something, and very sincerely too, and then there are the boat horns… Istanbul has an enchanting atmosphere.

You don’t express your music with words and are close to the nature as well. Is this true?

Words aren’t everything. Natural voice of people are stronger than anything. Sometimes I listen to the clattering of utensils in restaurants, the rhythm of people.

Music in America, for example, is so weak, not all but most. They seem to list words that don’t express anything it seems.

I have been to Thailand many times. People live in nature there, they don’t talk much. They respect a lot of things, even a bug.

What do you think about the modern fight between nature and humankind?

I like nature but I also like cities… Because people are still communicate in big cities, especially ones in the East and the South. For example, we don’t talk to each other in public transport in Switzerland. New York, Bangkok and Istanbul are other big cities I like.