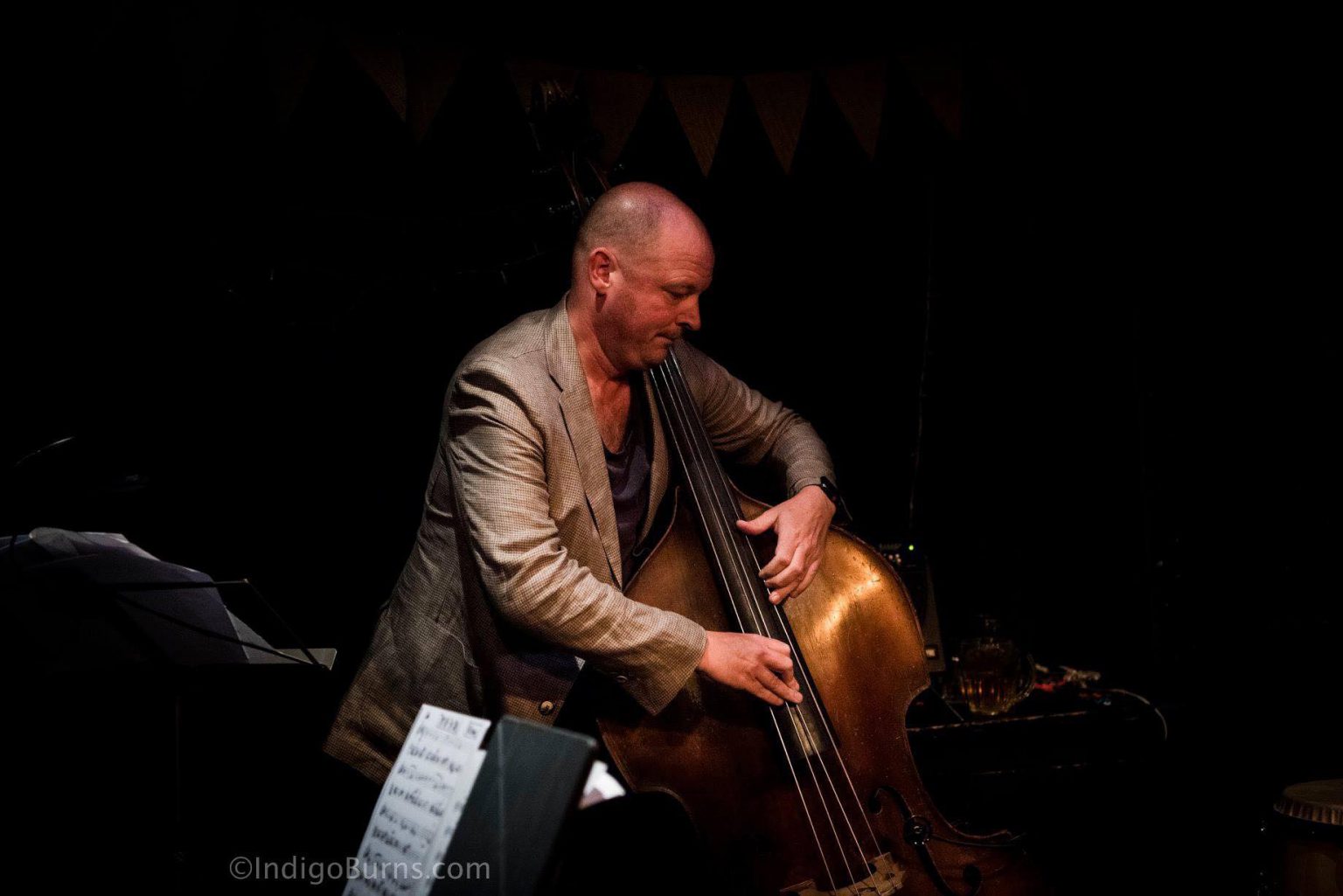 He loves a broad spectrum of jazz, but for him the language he relates to most is bebop.

He has been to New Orleans four times, and he still has a desire to go again.

He says “The world is crazy right now, stick together. Be kind, play music and be positive.”

How did you get the idea that the double bass is the instrument you want to play?

I was one of three guitarists in a band at school, around 12-13 years old. One day we decided one of us should learn bass. It was me! So I got a bass guitar, and later, at 17 years old I inherited a double bass. I enjoyed playing it so much I pretty much gave up my other instruments.

May I ask of whom you inherited the bass from?

My great uncle had it.

How do you define “swing feeling”?

It’s somewhere between a triplet and a dotted quaver. You know it when you feel it. (smiling) 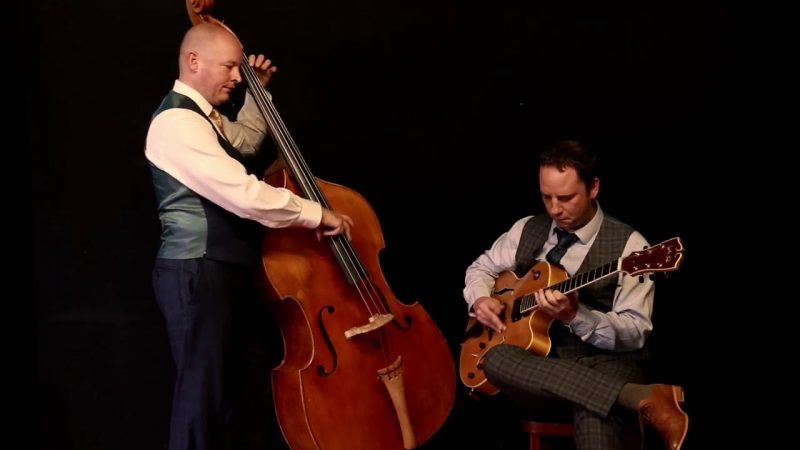 What was the first tune(s) you learned?

I think probably ‘All Blues’ or ‘So What’ from Miles Davis’ ‘Kind of Blue’. My parents had the record, and I would try to play along.

You like the sound of Chick Corea and Herbie Hancock, and bebop is the main thing for you. How did your musical taste improve over the years? Who are you inspired by?

I remember listening to my parents’ records, and it was a good collection. I liked ‘Kind of Blue’, and I went from there into seventies jazz/funk. Later I began exploring the earlier music, bebop and swing mainly. I love a wide spectrum of jazz, but for me, the language I relate to most is bebop. The modern players I like tend to come from that school.

Who are these modern players?

Jazz bassists are usually considered as “the heartbeat of the band.” What would you say?

That’s one responsibility… It depends on the type of jazz, I think. Like some bands collectively improvise, and nobody is stating the time. Most of what I enjoy does tend to be driven along by the bass and drums.

Are you left-handed, or right-handed? How does it affect one’s performance while playing? How important is body language when it comes to playing the double bass?

I’m left-handed. I had a very old violin teacher when I was young and she made me play right-handed. I’m not really concerned with how it affects my performance now—both hands have the stuff to do. I don’t think much about body language. I think about staying relaxed and efficient. It means I can keep going for more years if I don’t damage myself!

They often say jazz double bass players are the ones who are more calm and silent in comparison to the other members. Do you agree?

I think that’s a bit of a myth. There are extroverts and introverts on all instruments. Everyone has a mixture of both.

Have you been to New Orleans? Or do you have a desire to go?

I’ve been four times, and I still have a desire to go again! It’s a great city.

Amazing—we played a few gigs and local musicians came and joined us. They invited us to their gigs and invited us to join them. It was a very welcoming and friendly experience. The standard of music there is very high, and they all seemed to have a lot of fun on their gigs.

One time we went to join a second line—it’s where the various social clubs gather and then walk through the streets following the Indian chiefs and a brass band. It lasts for several hours. There are planned stops for barbecue and drinks along the way. It’s a huge community tradition. It’s like a gigantic mobile street party. Afterwards, we ended up in a great neighbourhood bar with music and free Cajun food. Best day ever. 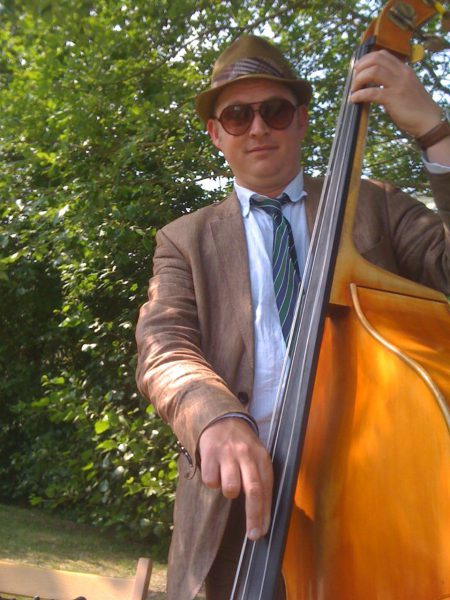 ‘Discover Double Bass’ (https://discoverdoublebass.com/) is a good resource for technical learning. Other than that, my resources are the records I like—figure out how to play your favourite solos etc.

When you solo, how do you feel? Do you play more melodically or rhythmically or harmonically?

I like to mix it up—I think the melody is most important, so I try to make melodic statements and link them together with rhythmic ideas or unusual bits of harmony. I’m always on the lookout for some humour in there too. I like to leave space and wait for an idea, rather than continually play. I generally feel focussed when I’m soloing.

What are the limitations of your instrument?

4 strings, 3 octaves. I like being forced to create a new idea within the limitations. Pianos, for example, have so much scope I don’t know how they chose what to leave out.

Could you tell us a bit The Jazz Agency?

That was an agency I set up myself to try to get work for my friends and me. It worked pretty well for a couple of years, but now it doesn’t get any traffic. I don’t think I have time to figure out how to make it work again, so I haven’t done anything with it for a while.

What do you think about online performances during corona days?

I’ve watched a few. It’s ok, but it doesn’t feel like being at a gig. It’s nice that people are doing it though.

What do you see as the future of the music?

It’s obviously a niche pursuit, so it’s always going to be on the margins. There are lots of exciting young players with really interesting projects at the moment—long may it continue! There’s a place for all of us, but we need to be responsible for our own music scene. Go to gigs, buy records, create gigs, promote them etc. If your heart is in it, that doesn’t feel like work.

How can we follow you and your (online) performances?

I haven’t got any online performances planned. When I have gigs in real life, I tend to advertise them on Facebook.

Are you working on any new project at the moment?

Yes, Sara Oschlag is putting a record together where all the musicians add their part remotely. She’s got people in various parts of the world involved. It should be interesting!

Always be kind. The world is crazy right now. Stick together. Don’t argue online or be mean to people. Be kind, play music and be positive.