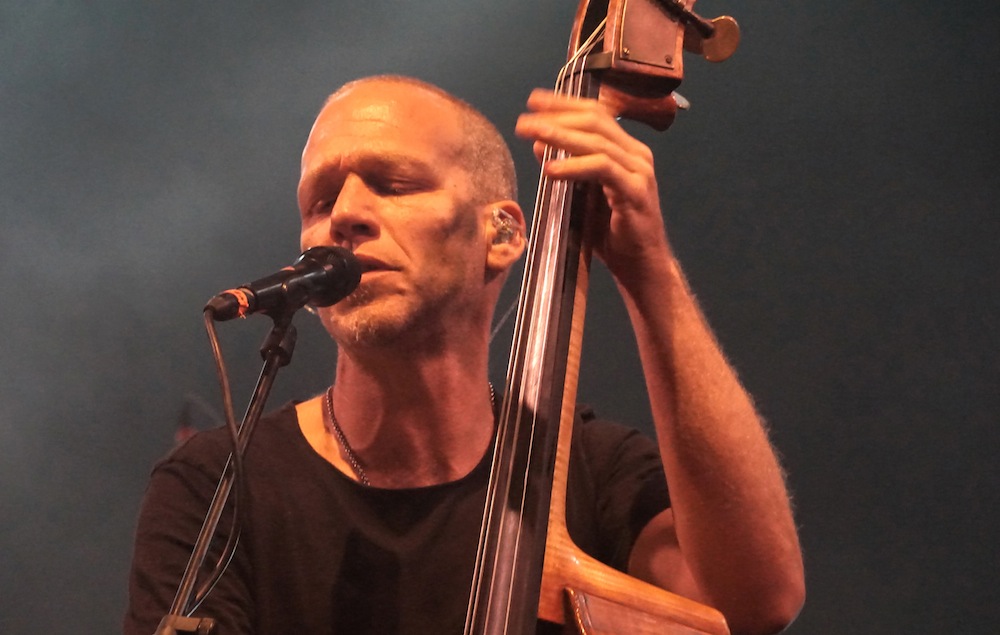 I had followed Avishai Cohen’s previous albums closely and his concert was one of the first concerts I wanted to see when the festival program was first announced as a music lover who has seen him perform live before. However, I was very surprised when I listened to his latest album a week before the concert. There was a serious discrepancy between what my ears signalled to my brain as I listened and the Avishai Cohen music I remembered until that day. In all honesty, I even considered whether to skip this concert as the event day drew near just because of this reason.

The concert day arrived. I was in high spirits because I was close enough to the stage to see the musicians and as far away as to hear the sound balanced and in high quality. The concert area was beautiful. The event was to take place in Swissotel’s garden among trees and the weather was beautiful. These factors made me even happier. The stage lights first attracted my attention as the concert started; they set up a great light system. My experience of this concert was affected by these factors that made me joyful even before the concert had started, to Avishai Cohen’s communication with the audience, to the successful performances of all the musicians and to the positivity and pleasant energy of the pieces. As someone who has admiringly followed Avishai Cohen for a long time and got his first LP from Seda Özgüven, the artist of From Darkness album’s cover photograph, as a gift, and if I hadn’t listened to the latest album “1970” before the concert I could have experienced a disappointing evening which couldn’t be saved by these factors I mentioned. To put it shortly, this new style wasn’t a surprise for me and I tried to experience the concert not as an Avishai Cohen one, but as a performance of a talented group of musicians in a pleasant atmosphere. Despite everything my expectations were not met as a person who has listened to Avishai Cohen’s older musical approach live on the stage and who frequently listens to his albums.

Avishai included his own compositions which is inspired by the 1970s pop music, a cover of John Lennon / Paul McCartney’s For No One, interpretations of Se’i Yona and D’ror Yikra, which are folk songs from the Middle East, the Eddie Palmieri / Ismael Quintana classic Vamonos Pa’l Monte and an American gospel piece called Motherless Child in his album 1970. And Avishai does the vocals from the start to finish, which is unusual for him.

There was a pop-rock team on the stage: Avishai Cohen on the bass, double bass and vocals, Shai Bachar on the keyboards and the vocals, Marc Kakon on the guitar, electric bass and vocals, Noam David on the drums and Karen Malka on the vocals. The variety of vocals enriched the pieces and contributed to their atmosphere. Besides from the fact that Cohen’s vocals were shadowed by his virtuosity on the bass, it is fair to say that Avishai has no such claim either. We can define his vocal range as a warm, natural and resonant baritone. We caught glimpses of Middle Eastern elements in the semi-chaotic intros, especially in the two Israeli folk songs, and often in the vocal interpretations (especially in songs) and in the Hebrew lyrics. We felt as if we were teleported to a wedding in Israel from the jazz concert at Swissotel during Se’i Yona. We listened to a happy and dynamic of this piece which has different arrangements. Avishai even showed off his oriental dance figures while playing the bass. I imagined a group of people dancing with their traditional garments at an Israeli wedding. If I had seen Avishai Cohen playing and singing this song as he danced in my dream, I would have woken up thinking what a weird dream in the morning and told my friends in our jazz group. D’ror Yikra was the other Israeli folk song of the evening. Avishai’s version of this piece, which has different interpretations, was almost ceremonial in character on contrary to his Se’i Yona. The other songs were generally inspired by the popular culture of the 1970s. Song of Hope was a pleasant 1970s pop and R&B piece with Avishai’s vocals in the foreground, which was enriched by the accompanying harmonic vocals of Karen Malka and the other band members. The piece is a call for hope with both its lyrics and its melody. My Lady is a funky, groovy and happy love song. In the meanwhile Shai Bachar did an amazing job on the keyboard and kept the funk and groove going on the stage. It’s Been so Long is the other hit piece in the album just like Song of Hope. The harmonic vocals draw the attention in this piece. Karen Malka did a god job on the stage during this piece as well. Karen Malka’s other great performance was the American gospel piece Motherless Child, which embodied funky elements as well. Malka’s strong gospel vocals in the background and Avishai’s increasing groove were in the spotlight during this piece. We saw Avishai playing the keyboard and doing the vocals during the Beatles’ balled For No One. I wasn’t too moved by the technique of his vocals even though I liked the warmth of Avishai’s voice during this piece. I can say that this version is warmer, rounder, more fluent and peaceful compared to the original version of the piece. One of the more dynamic pieces of the concert was Vamonos Pa’l Monte with its high dosage of salsa. We found ourselves in South America as we travelled through Israel, England and America. The best moment of the concert for me was when Avishai responded to his loyal listeners and played “Remembering” from his older pieces before leaving the stage. Our ears were overjoyed.

There were different reactions to the concert at the end of the day. Those who did not follow Avishai beforehand generally had a lot of fun and danced. The group of people sitting in the front, and who seemed to follow him for a long time, was rather surprised. I gathered this from the look in the faces of those sitting around me, from their reactions and their comments in between pieces. Avishai seemed to be aware of this as he said “I don’t know about you but we are having a lot of fun.” He finally found the solution in inviting those dancing in the back of the venue to the front to shake the audience up a little bit and to establish a connection between the stage and the members of the audience in the front. This increased the enthusiasm (if we don’t count those who were a little upset because they couldn’t see the stage anymore due to the newcomers to the front). He managed to win over the audience with the following dynamic pieces and his solos. Avishai showed that he can be a clever and able front man in addition to being a talented jazz composer and performer. We had seen the signs of this during his previous concerts already.

Avishai seemed to have abandoned that magnificent building he built around the genre of jazz and started building something entirely different. My ears searched for his old music to be honest. I listened to something that wandered between dance, funk, pop, R&B, Latin, folk and other genres. The pieces were pleasant, expressive and high energy if we were to see them independent from everything else; but they were far from coming together as a whole in the album and far from Avishai’s compositions we were used to. We traveled through different geographies and we like journeys, but these adventures came one after the other and took us further away from the places we enjoyed with Avishai in the past. Our heads were left spinning. 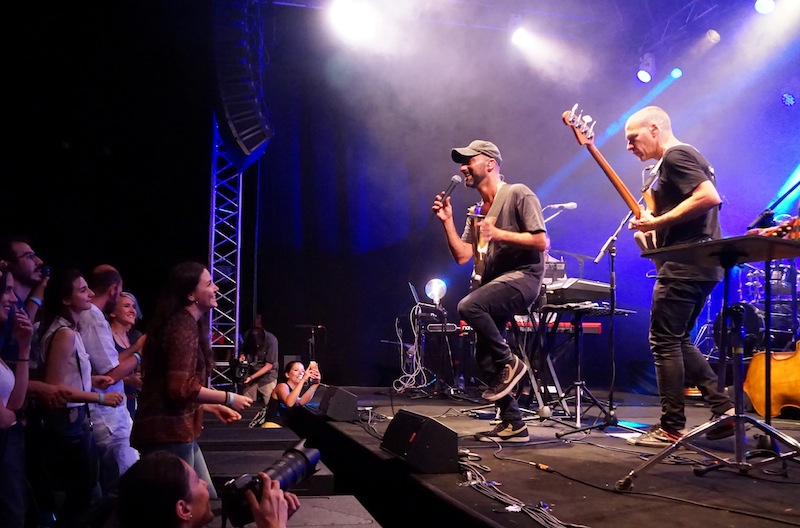 I wondered about what could have lead Avishai to trying out different paths. To get in touch with his roots; to show his respect to the genres that influenced him throughout his life; to try out different things; to have fun? Sometimes the musicians have the luxury to do whatever they please, though it is debatable whether Avishai has this luxury with the things he has done so far and the loyal listeners he gained so far. Or he might have found an easier way for his music to reach bigger audiences this way. It is impossible to know what kind of a role economic aspects play into this. Avishai might have had a fling with this album and might come back to the path he deviated from; he might have pick the road more traveled or he might continue to try out different paths. My personal hope is the first choice. What he said during an interview gives me hope: “When I release an album like ‘1970’ it doesn’t mean that I will only be concentrating on it, it’s just another part of my character as a story teller.” There might be many reasons why he said this, maybe we will be confronted with an entirely different journey with his next album. All bets are off.

I put my From Darkness LP on after coming home from the concert, sat in my chair and put my legs up. Avishai and I were back to factory settings. It felt good.