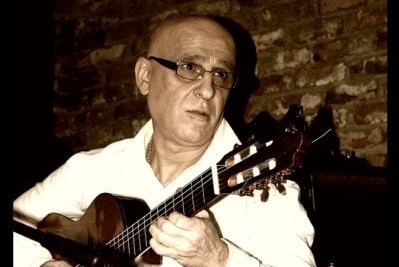 He was born on May 30, 1954 in Istanbul. He completed his high school education at Pertevniyal Anatolian High School and his university education at Marmara University, Department of Economics. He started playing the guitar in middle school while studying at the American College.

He continued his guitar adventure professionally, which he started as a hobby at the end of the 70s. He started taking private guitar lessons from Raffi Arslanyan in 1976 and started performing both as a guitarist and vocalist at the Sheraton Hotel and various music clubs. After returning from the military in 1983, he started to work as a marketing manager at Cömertler Matbaa. He married my mother in 1984. After 2 years, he quit this job and established a company called Tekspa Tekstil Pazarlama with his childhood friend Hamdi Üstünol. However, a few years later, his companies went bankrupt due to the economic crisis in the country. In 1989, he started performing in a club owned by Bedri Baykam in Ortaköy. After a short while, they started to take the stage with Aylin Karabulut, Gürol Ağırbaş, Günay Ekren, Semih Erdoğan and Hamdi Üstünol as “Vural Şerifoğlu ve Grubu” at the Kara Jazz Bar in Sultan Ahmet, run by Hakan Ayaz. In 1995, he was working with Gürol Ağırbaş for the album “Bas Şarkıları” (he took part in the album as a vocalist. The best-known song O ya na ne

also took the stage with Grup Gündoğarken at Galatasaray Club. In the following years, he took part in domestic and international concerts with Turkey’s leading artists.
He arranged the song Deryalar/Edirne Türküsü, which was included in the Levent Yüksel album named Menekşe, which was released in 1998. I know that he also composed compositions for Sibel Alaş and Esra Balamir, although I am not sure of the exact dates, but unfortunately I have no information about the names of the pieces.

From 2000 to 2009, he took stage with various groups in Arnavutköy Eylül Bar. Meanwhile, in 2002, he started to write a column in Star Newspaper, which belongs to the Uzan group. He wrote about music and art on weekends. This adventure came to an end with the bankruptcy of the Uzan group. Most recently, he worked as a guitarist in Sarper Semiz’s band (with Şuayip Yeltan, Ercüment Vural, Atilla Cummurcu) and occasionally performed vocals.

With the arrival of the internet in the country, my father became interested in web design. He prepared a website for all his musician friends and fellows without any charge. My father also designed the first e-commerce site of Zuhal Music and managed it for a while.

I remember him taking magic lessons from Mandirake as a kid just to surprise and delight me. He used to apply every new trick he learned on me after I got home from school and try to surprise me.

After 2009, he became interested in filmmaking. He was eager to shoot special effects movies made with 3d, after effects and green box, and he really did succeed. Again with his friend Hamdi Üstünol, they made a superhuman effort and made a documentary called “1923 Yıkımdan Dirilişe” (1923 From Destruction to Resurrection). Some music in the documentary belongs to my father and his neighbor Emre Sınanmış (Emre works at TRT and plays Mey). This documentary was broadcast on Halk TV on October 29, 2013

In 2010, at the special request of his friend, journalist Yılmaz Özdil, he wrote an article on the history of Vuvuzela. It was published in Hürriyet Newspaper this summer.

He shot a great video clip for Gürol Ağırbaş’s song Derun, which is included in the Bass Songs album, again using green screen and after effects (release date is February 24, 2020).

Not wanting to appear to be promoting his own name in this work, he released the video under the name of the film company Motion Dream Pictures, which he plans to set up soon. I know that they are preparing a clip for another song of Gürol in the album. These videos were to be published in the form of triology. In the last part, the story told by the video was going to come to an end, but unfortunately it was not possible…
About 1-2 months before he died, he was interested in the new trend of digital art NFT and he published his first NFT collection called Cyber ​​Forms on opensea, the largest NFT market.

About 1-2 months before he died, he was interested in the new trend of digital art NFT and he published his first NFT collection called Cyber ​​Forms on opensea, the largest NFT market. https://opensea.io/VuralSerifoglu
There were 3 other major nft projects in preparation. He even finished one of them. Exactly 15 minutes before he died, he sent me the trailer of his completed project on skype. He wrote that the trailer will eventually air in February. In this project, it was aimed to explain the suffering of refugees in this world and to raise awareness.

Gürol Ağırbaş was going to compose the music of his project.

About 15 days before he died, he fell unconscious in his studio and hit his head. We called an ambulance and went to the hospital, all kinds of tests were done and the results were clean. On January 15, 7:30, she called my mother from her studio and said she was going to the bakery. At 8:24, after a 5-minute phone call with Gürol Ağırbaş, he left the house and suddenly fell to the ground at the exit of the site and died before he could reach the bakery. A post-mortem examination was performed to determine the cause of death, and the result will be out in 3 months. He smoked a lot. Even in Ekşi Sözlük, an entry was made about his smoking habit…

My father was a wonderful person in every way. He was insightful, modern, knowledgeable, far ahead of his cultured age, farsighted, and superhumanly talented, and intelligent. He loved animals and young people very much. He gave free guitar lessons to many young people and even gave their guitars as gifts… He never cared about money, he only invested in people. My biggest grief is the interruption of his NFT project. For this reason, I will complete the unfinished work and publish it as soon as possible. I hope his work gets the recognition it deserves.