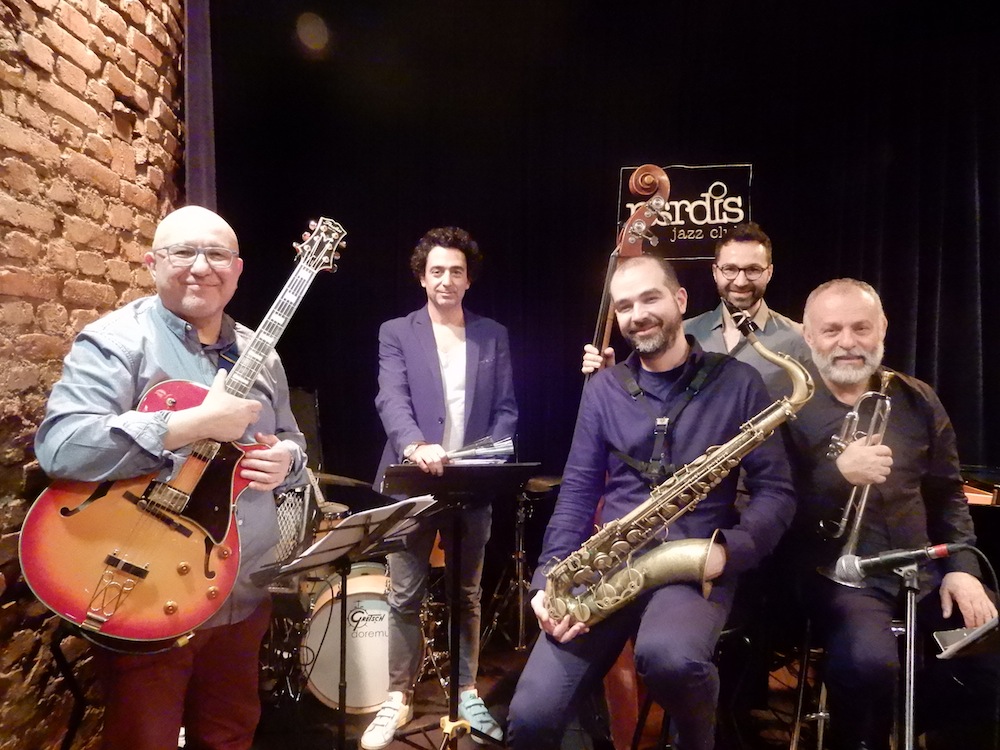 We will publish student essays for the Concert Evaluation class in this sergement. The first example is Bebop Project concert which took place at Nardis Jazz Club on the 5th of March 2018.

In the night of March the 5th, I was at the Bebop Project concert in Nardis Jazz Club. Since Bebop is a little difficult to listen, I thought the number of visitors and their attentiveness would be low. However, I was wrong. Audience was crowded and attentive. The acoustics were really good, too. Band was formed as a quintet. It’s only difference from most expectable Bop quintet, with Charlie Parker and Dizzy Gillespie, was that it had tenor saxophone instead of alto saxophone. There were Şenova Ülker on trumpet, Engin Recepoğulları on tenor saxophone, Önder Focan on guitar, Ozan Musluoğlu on bass and Ayhan Öztoplu on drums.

This was the first time I listened to Ayhan Öztoplu. The concert started with his short intro, then saxophone and trumpet played the head of “Anthropology” in unison (they played every head together throughout the night). The melody took me to 1940’s for a few seconds. Then, we listened a delicious tenor saxophone solo. Trumpet solo was very enjoyable. Şenova Ülker was already my favorite trumpet player in Turkey. He sounded very much like “Diz”. Later, guitar solo was very fast and full of short notes and syncopations. Bass solo had the most Bebop sound, in my opinion. Right after the bass they did a call and response between drum and other instruments in an order. Then they returned to the head. So, we were able to hear improvisations from all of the band at the first track. Then Önder Focan took the microphone. He was aware of us -as students from Boğaziçi University- and he talked about Bop a little bit. He mentioned an interesting reason of contrafact, which was not to pay for copyrights.

Second song was a blues by Clifford Brown called “Sandu”. It started with a guitar intro. First solo after the head was a Hard Bop-like trumpet solo with blues motives. Next was a very relax saxophone solo with comping by guitar -like guitar was impatient for his solo-. After the cool and relax guitar solo, bass solo had the most Bebop energy again. They returned to head and finished with a classical blues ending, right after Önder Focan pointed his head. Next one was named “Hot House”. Improvisations were mostly melodic and drum solo was very groovy. When they started to play the melody of “Con Alma”, everyone noticed the harmon mute on trumpet. It was a Cool Jazz kind of start. However, tenor solo had Bebop sentences on the latin rhythms. Trumpet -without the mute- also had gained dissonence. “Confirmation” was the last one of the first set. After guitar intro and head, saxophone solo had a honking sound. On his solo, Şenova Ülker went up and down chromatically like Dizzy Gillespie. Bass solo was so energetic that it was like an athletic performance.

Another Charlie Parker song “Segment” was the first song of the second set. Trumpet and saxophone solos were like Bird and Diz soloing, with longer rests. Guitar solo was also like he needed to stop in order to take breath. Both guitar and bass made use of chords in their solos. While Önder Focan was announcing the next one as “Prince Albert”, he told that it was built on “All the Thing You Are”’s chord progression. They also showed it by playing and he -in his solo- played a melodic improvisation more on All the Things You Are rather than Prince Albert. “Cherokee” -my favorite in the repertoire- was the next track. It was very entertaining for me with the drum intro, fastest saxophone solo and Dizzy-est trumpet solo of the night, followed by guitar, drums and the head melody. “Sympatheticus” by Önder Focan was announced as a contribution to Bebop from Istanbul. It had syncopations in the melody and blues ingredients in the solos. Musicians were playing this original just like they were playing a standart. When Ozan Musluoğlu said “Alice in Wonderland” to his friends in a funny way, we knew that it was “Blues for Alice” by Bird. After head, trumpet and saxophone solos, the call and response was between guitar and bass this time. Focan was singing while playing and Musluoğlu was trying to repeat guitar’s sentences.”Bouncing with Bud” was the last tune. After tenor saxophone and trumpet solos, guitar solo included every note possible as many times as possible. The head was also contributed by guitar interludes.

After the concert I had a chance to have a few words with Engin Recepoğulları. I asked him “Do you think birth of Bebop is somehow related to Charlie Parker playing alto saxophone and not tenor?” and he said “Of course, alto is much useful while playing those tunes.”. I also wondered about Clifford Brown and blues tunes in the “Bebop Project” repertoire. He said, he wanted these concerts to be more colorful and not boring. He also said, Clifford Brown is not a pure Hard Bop musician, he lived most of his life in the Bebop era due to his early death.

In conclusion, the band gave us some delicious and fulfilling jazz music. It had Bebop, blues and entertainment. I would definitely recommend this project to my friends, who are after depth in music.