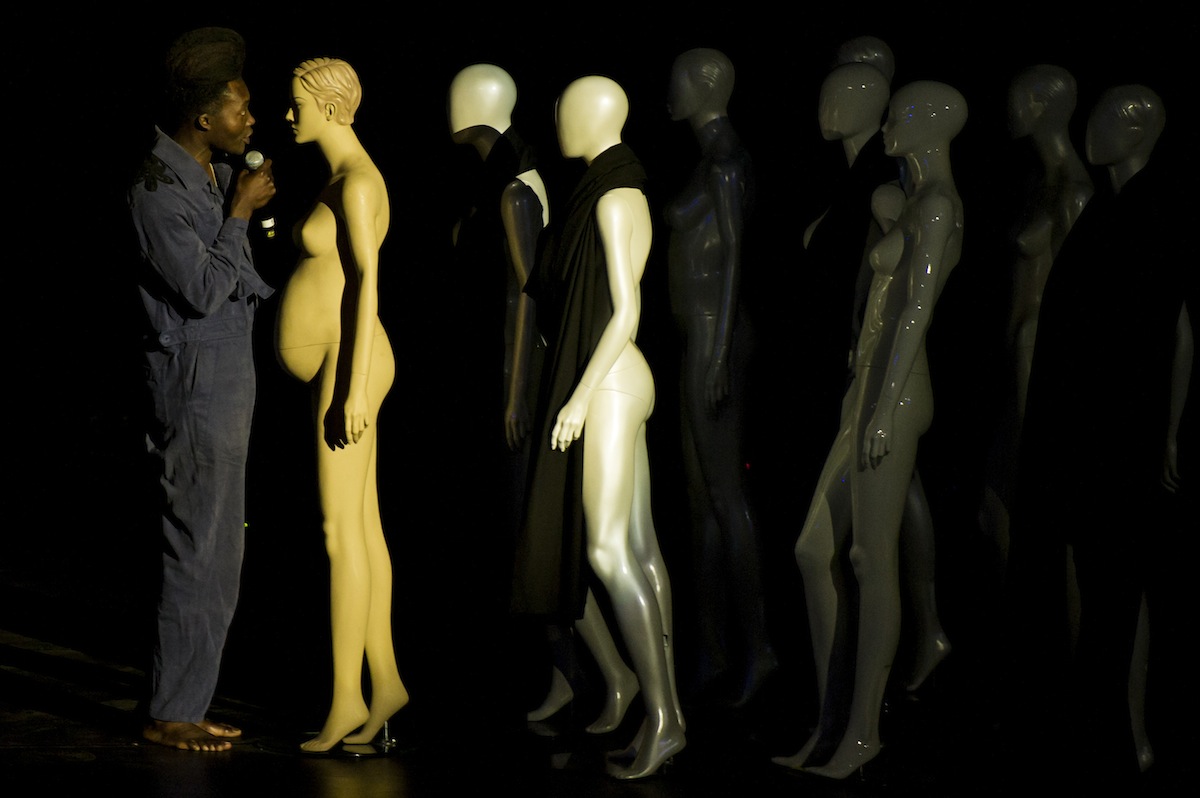 Benjamin Clementine is on the stage.

The other instruments come in.

The only thing I want by the third piece is a pair of sunglasses. I look at the ground to shield my eyes from the twirling rays of white light beaming into our eyes throughout the performance. The logo of the shoes the lady next to me wearing starts to glow in the dark because of the strong lights.

We can be teleported to Back to the Future.

Clementine greets us from within his song. “Hope you are doing well.”

His voice is rebellious. His approach to the piano is mischievous.

The naked plastic models on the stage have guns hanging from their necks. 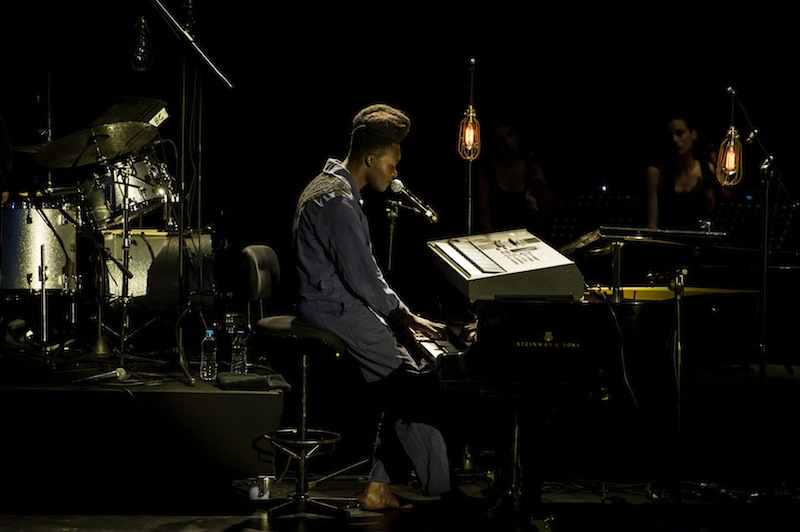 The audience is generous with its applauses.

Clementine says “London is calling you, what are you waiting for, what are you searching for?” I write “What kind of a world should I create on the stage?” in my notebook with Fernando Pessoa on its cover.

They call Clementine a poet.

In the meanwhile, things are happening in my world of imagination: For a second, I think Björk will step on the stage. The stage seems to transform into Dancer in the Dark. The feeling that Yann Tiersen will be dropped on the stage with a giant pair of tweezers. Then the tam-tam dancers arrive. And then everything disappeared into the smoke, poof, and the scene ends with the modern dancers flying around. When I opened my eyes again, I see the inanimate models. What is Clementine trying to say to them? Will he say “Come on my people, let’s go”? Or will he say “What would you understand you robots!”? Neither happened. He went over to them and said “Talk to me, say something”.

He goes back to his piano. He says “Women” with emphasis. Then he raises his head. “You, guys walking around all the time, don’t you just sit down, it is annoying”

There was a similar scene in a Nina Simone documentary. She shouted “Sit down” to a meber of the audience. I was startled while watching it on my computer and straightened myself up when I heard Nina Simone’s “Sit Down!”. You can see the scene in question (from 2:00 onwards) from this link:

I would like to note that Clementine is said to resemble Nina Simone.

Here is the IKSV introduction: “He prove the impressive effect of his music with his second album I Tell A Fly last year as he continues to follow his three muses Nick Cave, Tom Waits and Nine Simone.”

I turn my head. I see people scrambling around like ants on the hill. I feel ashamed as if I had gone to visit someone and my child did something wrong in their house.

The my world of imagination kicks in again. I don’t know why, but I think of Kağızmana Ismarladım Nar Gele as the song goes on. A couple of slaps across the face. I am back. My subconscious is unbeliveable. Clementine says Adiós. Thankfully, jazzy sounds paid me a visit too. The happenings on the stage carried me to Clark Terry’s Mumbles. My eyes drift off to “25th anniversary” written on the IKSV’s jazz festival poster in the midst of this atmosphere filled with whispers and screams. I try to calculate my own age. Where was I in the first year of the festival, what was I doing? Clementine makes exclamation sounds by himself on the stage. He is about to make a stop at the opera. “It’s hot!” he says. The audience laughs. I sense the the love for a baby in the audience; their relationship with the stage is just as such.

Istanbul Congress Center’s logo grabs Clementine’s attention. “What is that place?” he asks “Is it political?” He writes a song right in that second “Is it a political place?” See the related video:

I am hungry and cold. I think “Will there be the meatball sandwich sellers at the exit?” I imagine myself wiping my mouth with the back of my hand and meeting Clementine’s eyes as I take another bite. He says “It’s a wonderful life”.

I did not know that Clementine sang in the metro to earn money, was homeless and that he hid his belongings under the bed so that people he did not know at the hostel would not steal them. I did not know about his life as a homeless person in the streets of London and Paris.

I also did not know that he said “Music is my reason to talk to people.”

It seems like only Charlie Chaplin had not visited me during the concert with his The Factory Work, then he came over as well. These visitors signal to my repressed feelings being triggered by music.

I see Sevin Okyay and Mehmet Atak across us. I wave. I am so happy when I run into people. Clementine says “I am an alien” in the meanwhile.

His voice is in tears. I am not. Everybody is on their feet. They wish Turkey happiness and freedom. All the unfair events pass through my eyes one after the other.

I go to the university the next day. I start listening to Clementine’s London. I clench my fists. I walk into the corridor as if I am marching with a hoe in my hands. I find the cafeteria. I stuff two spoonfuls of pasta in my mouth. I don’t want to wear earrings or shoes during my upcoming performance that evening (Sibel Köse Jazz Vocal Workshop-Şakıma Bayramı). I want to rebel. To get lost. Two teardrops fall from my eyes. So Benjamin, I think, this cannot be a coincidence. You came here to tell me something. And then you went on your way for your performance in Kiev.

I promise myself to own and guard my own story.