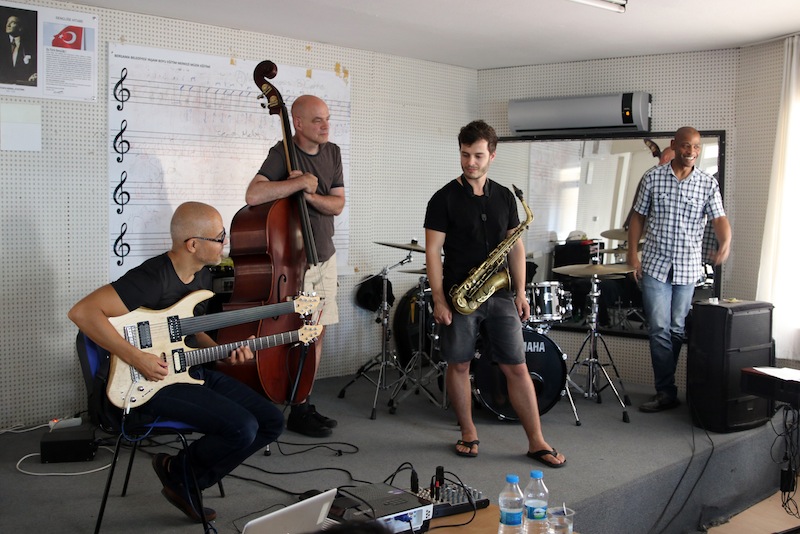 Would I ever imagine that I would give a jazz workshop in the city of the Altar of Zeus, while I admired it in Bergama Museum in East Berlin in 1982?.. Antiquity and recent history go hand-in-hand in Bergama. Its bright-faced people are so lucky, because they have a hardworking and young mayor: Mehmet Gönenç. He is the only authority who lend a hand to guitarist and instructor (coming back from New York) Timuçin Şahin’s project, Hayal Gücü Müzik Merkezi (‘Imagination Music Center’). This is a very valuable support that was made available by using every single mean in the hands of the municipality.

Ali Perret and I participated during the second week. I was a bit confused about what type of workshop I should give until I arrived in Bergama. I talked frequently with Timuçin to learn the participant profile. After all, this was the first time such an event was going to take place in Bergama. And with foreign musicians who travelled from afar, too! How was the town folk reacting, what was the musical level of the participants? I decided to follow the path in the middle with such questions in my mind. Because there was no age or knowledge limit. Ali Perret and I arrived in this beautiful and historic city with the means provided by Bergama Municipality. 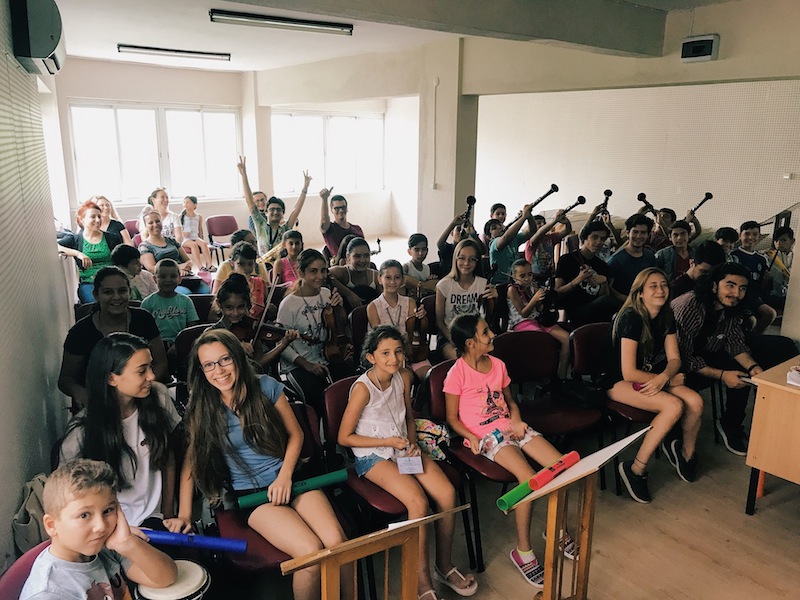 Our accommodation Acropolis Guest House was an old renovated house with an inner court in the old historic town. After catching up with Timuçin during dinner, we got to meet his incredible seven years old son Mahir (he knows Charlie Parker’s whole family and can play the first four scales of So What on the piano) and of course Owen. It was really exciting to meet the participants the next day, as I had been curiously waiting to do so. I had a crowd of 30 people in front of me and all of them were eager to learn and talented. Almost all of them played an instrument. For example, there were four clarinet players between the ages of 7-12, dreaming to become like Hüsnü Şenlendirici one day. There was even a young girl who was a violin player coming from Lesbos Island.

I talked about radio and being a radio programmer for two days. I explained the structures of Long Plays, 45 rpm records, 600 ft film reel. Most of them saw these for the first time. After that, I gave a brief introduction of “Jazz History”. Ali Perret lend me a hand with his piano to demonstrate execution. I introduced the instruments of symphonic and orchestral jazz at the end of my workshop. I showed videos of Danny Kaye and Cem Yılmaz conducting orchestras to be able to explain myself better, especially to the children. I hope that helped. Ensemble classes followed workshops every day at 19:00.

I participated in these classes after my workshop and couldn’t believe my eyes and ears. I saw what an able instructor dear Timuçin is in addition to being a first-class musician. The same applies to Ali Perret. Timuçin directed the students using an interesting method, and asked a volunteer student to do the same afterwards. Ali combined Butch Morris’s “Conduction” method with his own experience. The result was incredible. It was a great joy to converse with the participants and their parents after these classes. 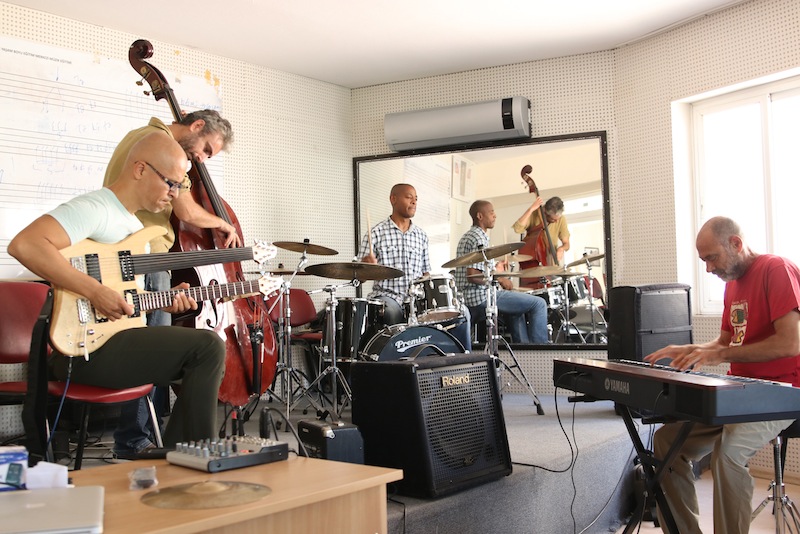 I couldn’t get enough of conversing with other instructors about music after we were done with evaluating the day. Unfortunately I had to return home on the third day due to my radio programs. Ali Perret, Owen Hart Jr., Timuçin Şahin, Apostolos Sideris, Alp Turaç and Reggie Washington shared their experiences about the last weeks. Topics of sound, music and improvization, as well as “Collective Consciousness and Mutual Cooperation” were focused on for four weeks. The main methods of “Bergama Young Musicians Collective”, “Art of Listening Workshops”, “Workshops for Instrumentalists” and “Jazz Club Performance Platform” were that they were interactive. Timuçin surprised me by letting the children greet me through the phone during the class on the last week. It was impossible for me to forget those talented and sweet children.

This tiring but equally joyful marathon that lasted for four weeks drew to an end with Mayor Mehmet Gönenç and Timuçin Şahin giving the students their certificates during the ceremony at Bergama Municipality’s Yaşam Boyu Eğitim Merkezi. Timuçin said that he was tired but happy, and that he wished to continue on with this project next year when I spoke to him before he returned to New York. It is inevitable for such a project to continue when there are such idealist directors and incredible musicians as instructors.

I would like to say thank you as well.