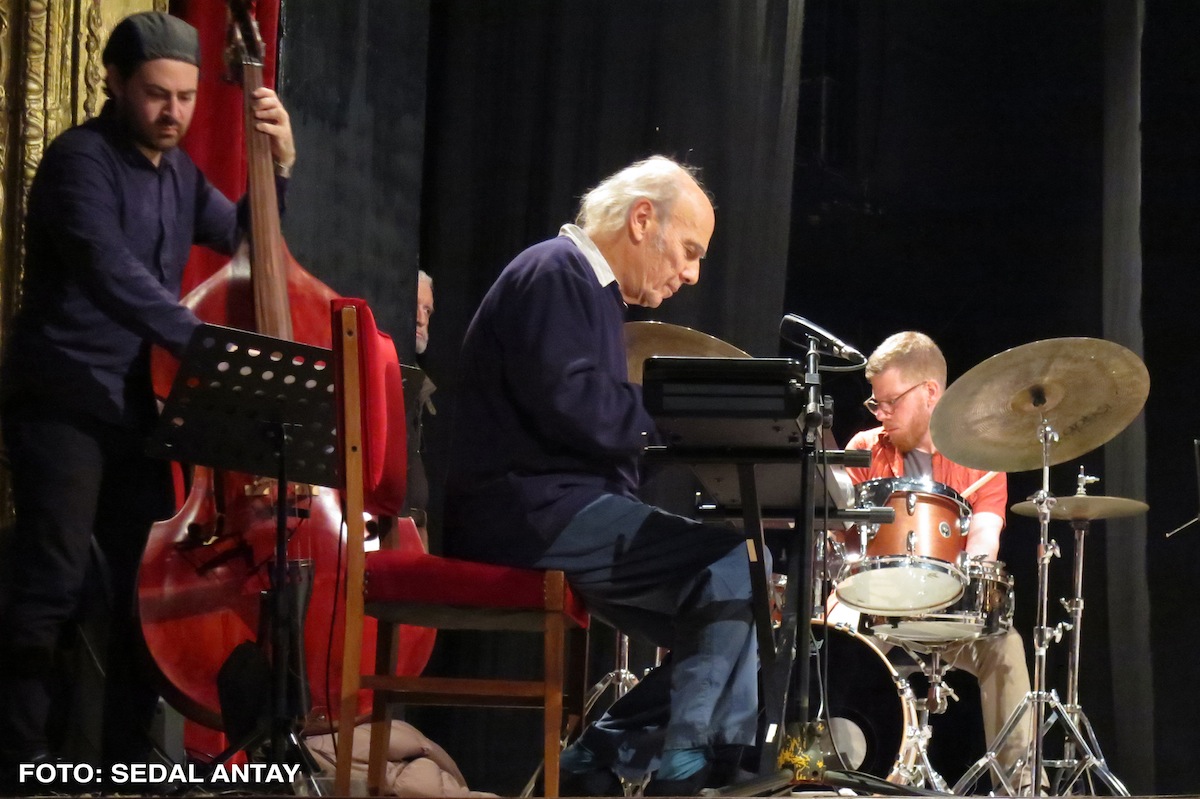 When you enter Beyoğlu Halep Pasajı and pass through stores selling cotton tracksuits, leather accessories, decorative items, etc, you reach an old theater, hidden away like the treasure cave of Forty Thieves [From 1001 Nights]. This place is Ortaoyuncular Theater, known previously as Ses Theater founded by Ferhan Şensoy. It is one of the rare undiscovered halls in Istanbul that hasn’t been demolished yet. This nostalgic beauty, covered by a burgundy must, is hidden away by grey cotton stores. However, I don’t remember attending a jazz concert here before. Especially with this many jazz musicians…

As I was walking towards the 6th and last concert of 2016 of Emin Fındıkoğlu +12 Orchestra, I started seeing familiar faces at the passage gate. Volkan Topakoğlu, the double bass player who was just about to perform on the stage, was leaning towards a wall, chatting. I heard from friends who were just two steps away that Işık and Ferruh Gençer, the owners of Pan Yayıncılık (‘Pan Publishing House’), had just walked in. Murat Beşer and many jazz writers… Many masters from Neşet Ruacan to Alper Maral, musicians from young and middle generation, newly budding musicians… All these familiar faces, whom I was used to seeing in different places, and those I haven’t seen for quite a while were gathered together. In short, “+ all their admirers” came to watch Emin Fındıkoğlu +12 Orchestra perform. 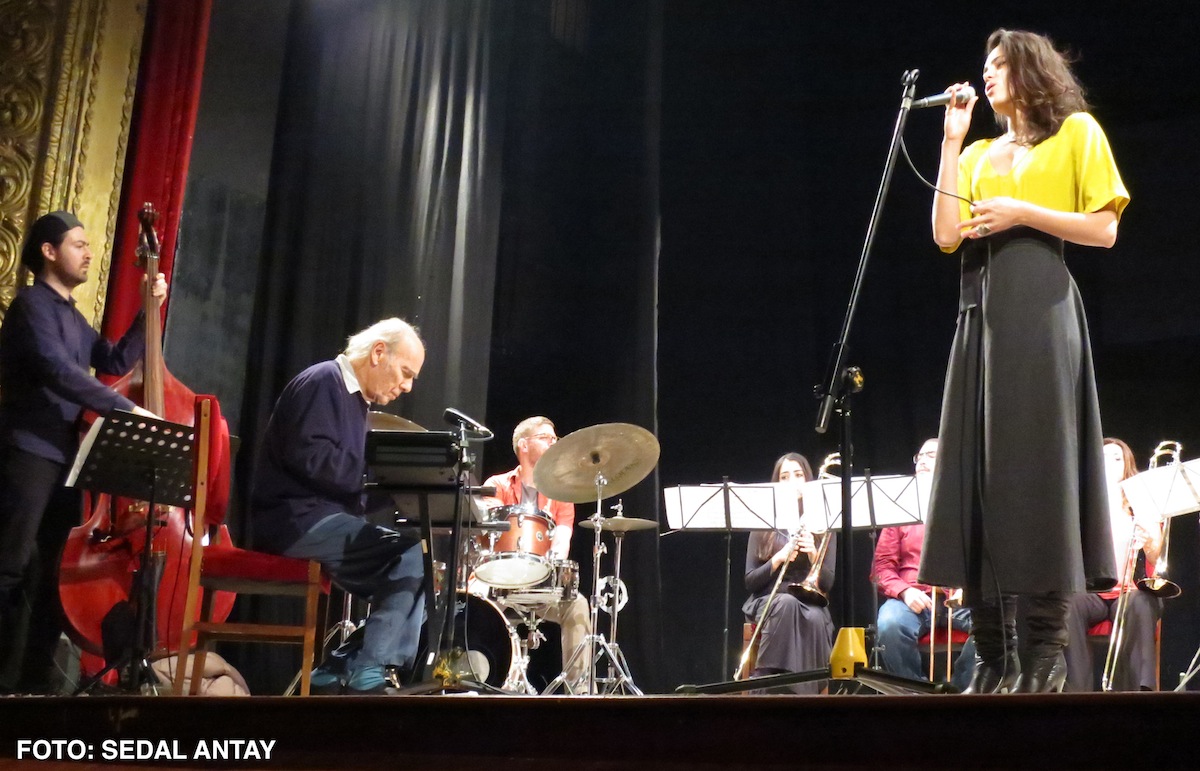 Emin Fındıkoğlu, a student of Arif Mardin, graduated with a degree in jazz arrangement from Berklee and had played with many orchestras in Europe, and founded many in Turkey, lending a helping hand to raising many musicians and singers. This 76 old esteemed musician was onstage with all his natural allure and experience at Beyoğlu Ortaoyuncular Theater on the 6th of December 2016 evening. He made jokes throughout the evening, probably due to his beliefs that a jazz musician should have an anarchic perspective and defy the system. He made the occasion feel like “a gathering between friends” with his easygoing attitude.

This time around, two of the leading trumpet players of Turkey, Şenova Ülker and İmer Demirer, were added to the +12 Orchestra, directed by the master himself while playing his keyboard or walking around. Therefore, it was +12+2=14 Orchestra on the stage. The friendship between Fındıkoğlu and both Ülker and Demirer go back at least 30 years. For example, they played together in Euphony, founded by Fındıkoğlu in 1986. Tuna Ötenel (s) and Fatih Erkoç (tb) also played in this band that Fındıkoğlu still talks about with praise. 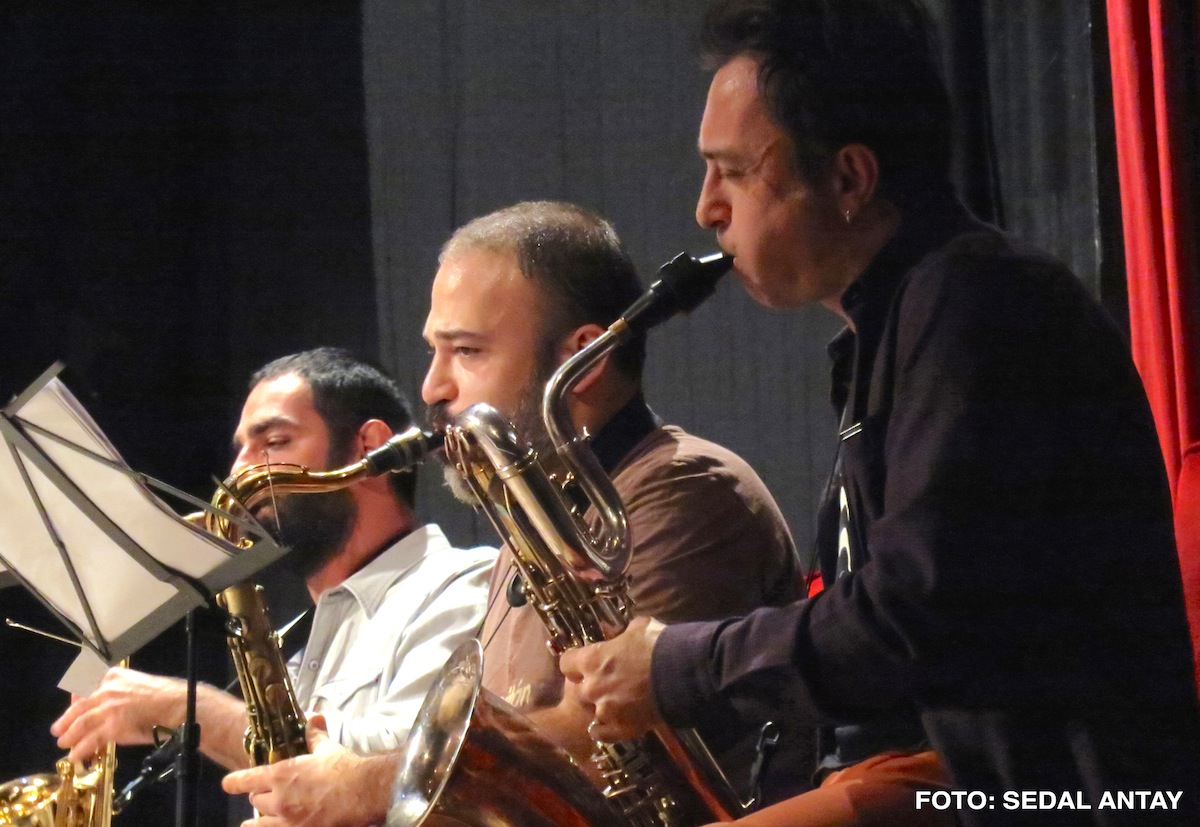 Returning to the evening, let’s list all the other members of the +12 Orchestra. Barış Yazıcı was playing the trumpet, with Işık Üstündağ, Ebru Kennington and Didem Yılmaz on the trumbone; Çağdaş Oruç, Meriç Demirkol, Duru Tuna and Barış Ertürk on the saxophone (all of them were students of famous musician/teacher Ricky Ford at Bilgi University); Volkan Topakoğlu on the double bass; Ekin Cengizkan on the drums and vocalist Meltem Ünel.

I knew about Meltem Ünel through the project “Voce” she did with Emin Fındıkoğlu and Melisa Kral but I haven’t heard her performing live before. The vocalist has been taking private lessons from Emin Fındıkoğlu since she was 19, and has been working professionally with him. Meltem, who is only 26 years old, drew my attention with her mature voice and calm, clean vocals. The years of training she did with the vocal guru Fındıkoğlu could be heard in the clarity of her voice and distinctly sang lyrics. She looked like a pleasant memory from the past with her casual chic retro clothing and elegant stance. I thought “The excitement of singing in such a big hall and sharing the stage with her mentor Emin Fındıkoğlu can be seen on her face” while watching her. However, I learn later on that she wasn’t able to hear her own voice due to a technical error in the sound system, and had to sing while the wind instruments were playing full-speed in the back. I appreciated her even more after learning that. Meltem sang beloved big band classics like “I Concentrate on You”, “Beware My Foolish Heart”, “But Not For Me”, “I’ve Got a Kick Out of You” with Fındıkoğlu’s arrangements. 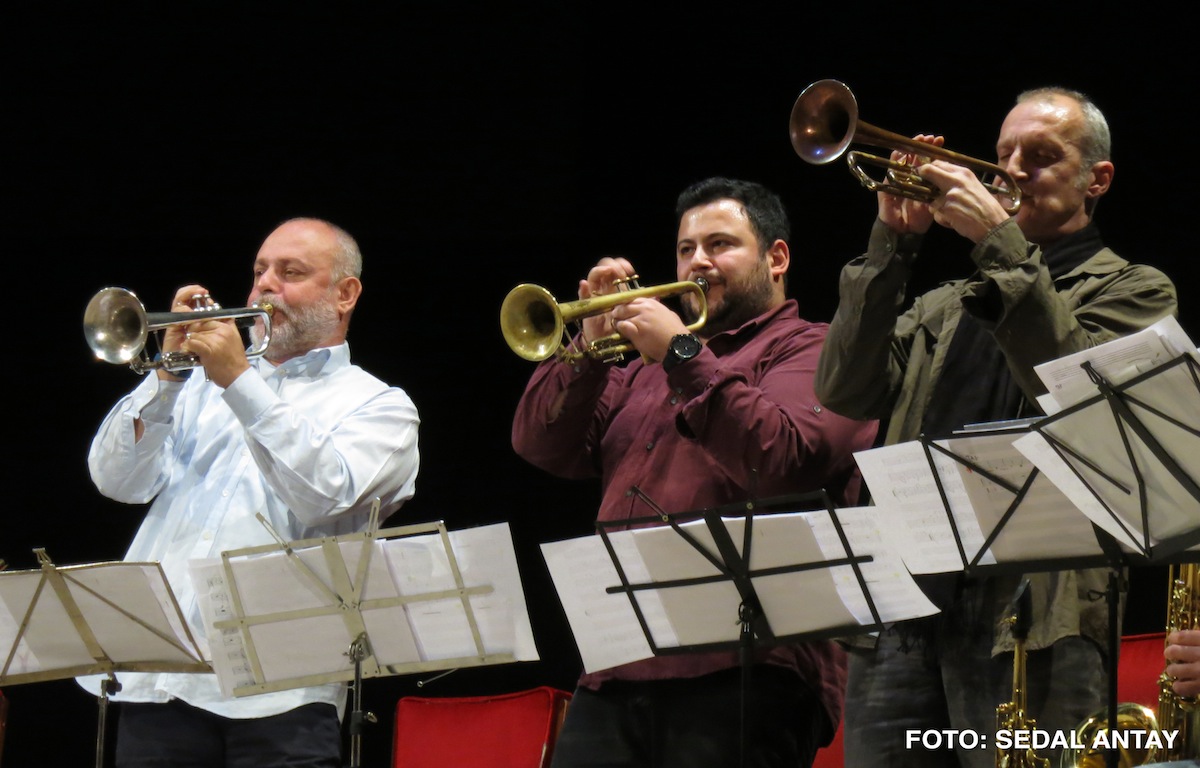 The emotional baritone saxophone solo by Meriç Demirkol during “A Day in the Life of a Fool” and the trombone-trumpet combo trade off during “Miami Beach Rhumba”, which Meltem sang with a Latin accent, were the climaxes of the evening. Speaking of climaxes, we should mention “Coconut Woman” (or in the joking words of Fındıkoğlu; “Kokoreç Woman”) which Meltem sang with the same sweet Latin accent.

People shouldn’t get upset thinking this singer girl is only talking about the vocalist. Let me shake things up a bit by going back to talk about the band. The members of +12 Orchestra are musicians we all respectfully and lovingly follow. I am not sure if I should tell you about them once more. However, there was a newly-discovered name for me: the 25 years old trombonist Işık Üstündağ. Üstündağ’s dialogue with his brothers during his solo trade offs were fluent and at ease. 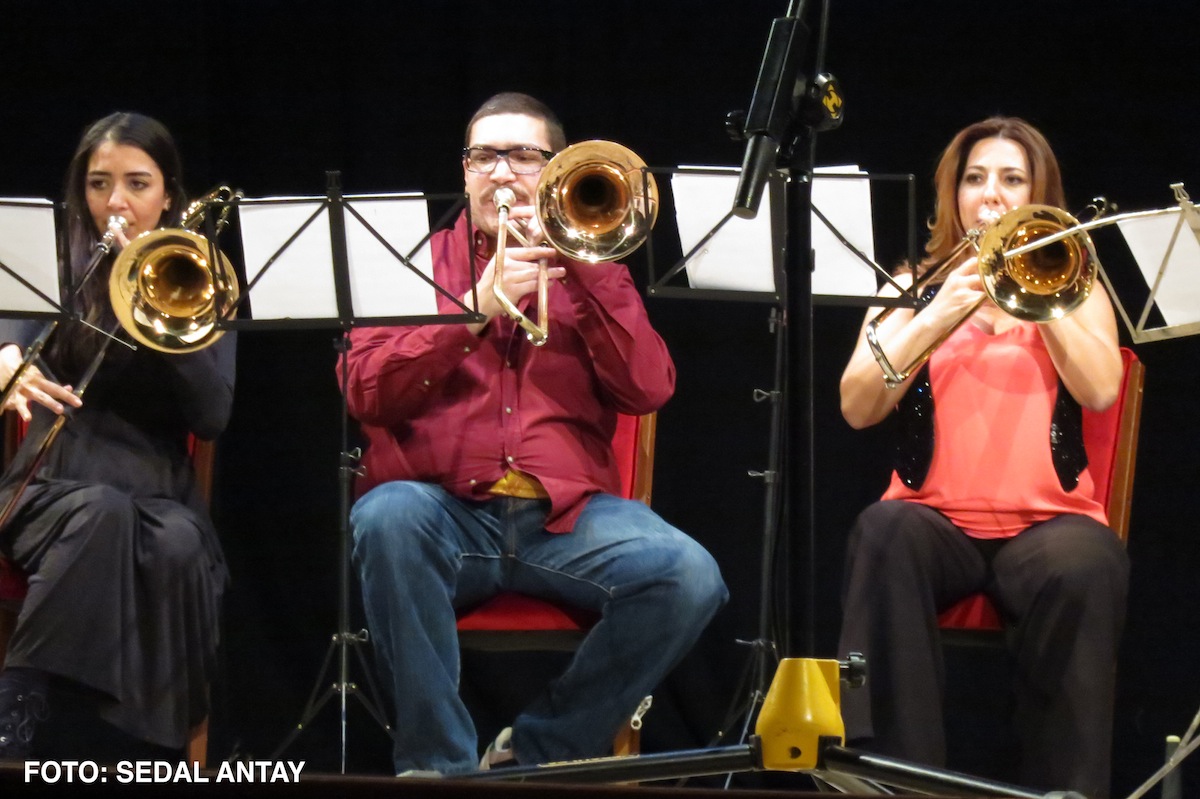 The only thing I felt uneasy about the concert venue was the deep bass rhythms blasted by one of the neighbouring entertainment venues during the quieter moments of the concert. Those irritating moments reminded me of a scene from the movie Inception when the one of the fictionalized dreams was being demolished by the sounds coming from the real, outside world. But thankfully the jazz dream we were enjoying wasn’t fiction, and it proved to be strong enough to withstand these.

The evening ended with many encore pieces, and Emin Fındıkoğlu+12+2=14 Orchestra drew the concert to an end with a national tradition. Our İstiklal Marşı (the Turkish National Anthem) was improvised on and sang, occasionally by one voice, and occasionally by the collective one. We left the burgundy mists of Ortaoyuncular Theater with thoughts that performed solos in our heads. I thought that this must be the difference of Emin Fındıkoğlu…

Suggestion 1: You can visit https://www.jazzdergisi.com/emin-findikoglunun-jazz-yolculugu/ to read the profile interview İrem Gökbudak made with Emin Fındıkoğlu for her “Local Jazz Heroes” series.

Suggestion 2: You can listen to “Sinir Standart” from the only album Fındıkoğlu has ever released Sinir Standard & Other Dog Songs (1996) by clicking on this link: