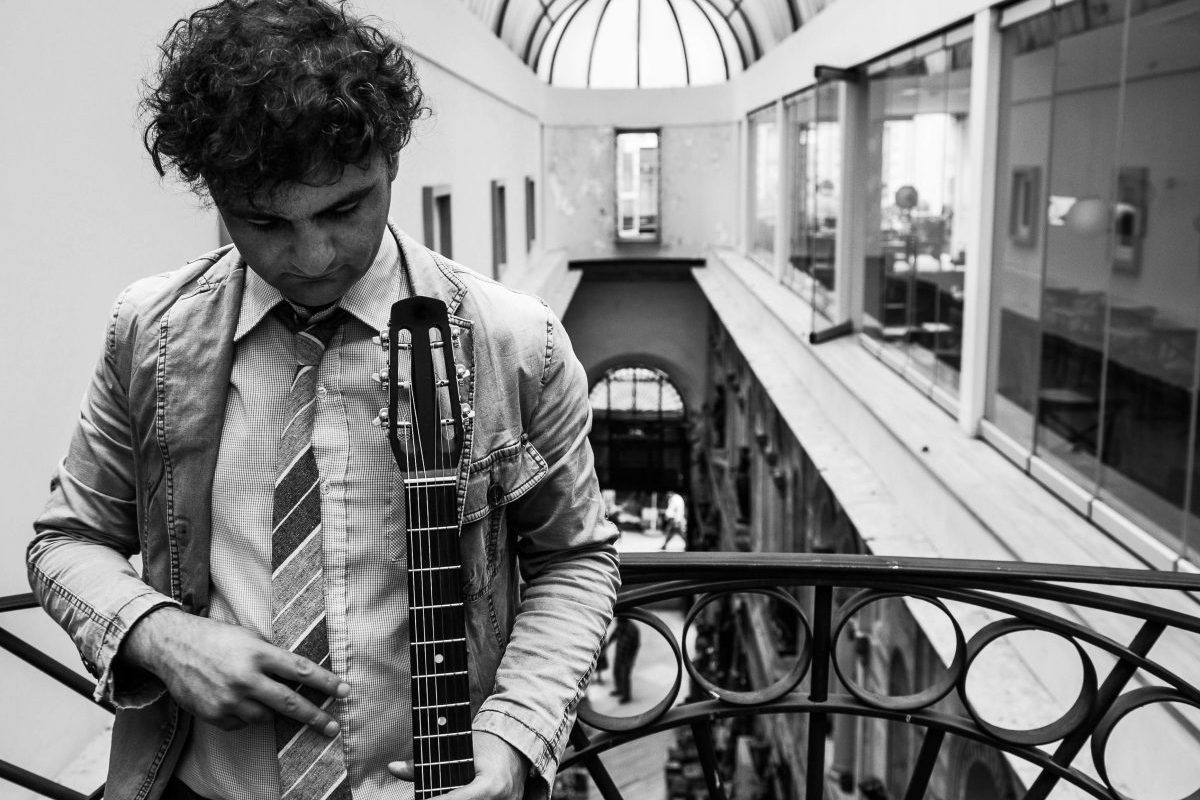 It is not that common to see luthiers who work on manouche guitars in Turkey except for a few rare examples. We learnt through Kaan Mete that Çağdaş Önder and Hüseyin Yıldız have focused on manouche guitars and that they made a special guitar for Kaan Mete recently. We had a great conversation while we got to know Çağdaş Önder and Hüseyin Yıldız more closely in the meanwhile.

Ali Focan: Could we learn more about how you decided to make this guitar and how the process went?

Çağdaş Önder: The story of the guitar starts with one of Kaan’s concerts. We were at the concert with Hüseyin and we decided it would be a fun project to make a great guitar for Kaan. We saw this project as we see each other—friendly. Just as Kaan is humble and relaxed enough to play the the metro stations, we wanted to express that feeling during the making of the guitar. We believe that this collaboration will be a facilitator in presenting this music to the people freely.

Hüseyin Yıldız: Kaan is our common friend, we thought that us making this guitar with such pure feelings would be a great project and a memorabilia.

A.F: There are only a few guitarists who represent this style of music in Turkey, I think you are the only one who plays gypsy jazz and has an album, is that correct Kaan?

Kaan Mete: That’s correct. The only Turkish gypsy jazz guitarist who has released an album in Europe.

Ç.Ö: This guitar is the product of a dialogue, it is a hybrid. It was a pleasant surprise that he asked for a soundbox in the body of the guitar! We wanted to work on soundboxes, but we didn’t know this would be the guitar. Because this was the first guitar with a soundbox that we made.

A.F: By the way, could you tell us a abit about what a soundbox is?

K.M: We can summarize it as ‘a body within a body’. The resonated sound goes directly outwards instead of towards the neck. 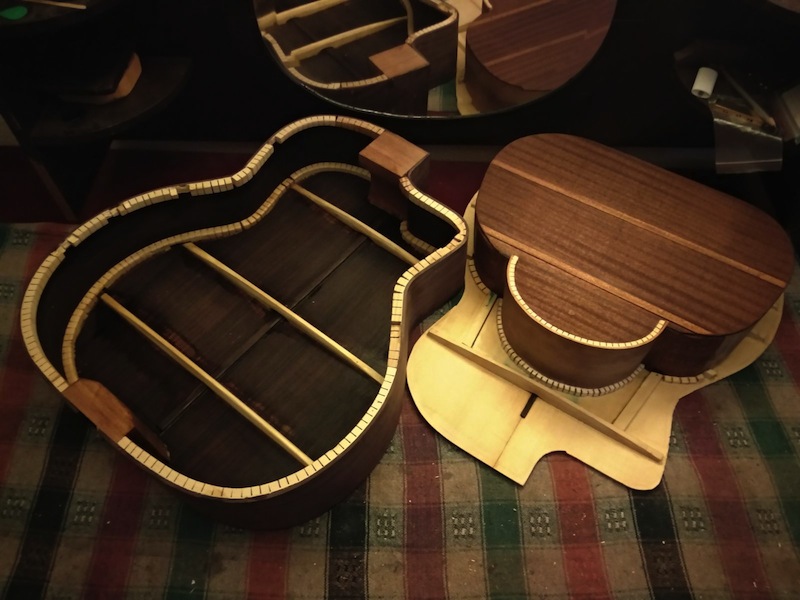 H.Y: The sound is amplified due to this little room inside the body.

Ç.Ö: The sound is collected in the room inside the body and thus directed outwards across.

K.M: This guitar has the body design as created by the first creator of Selmer guitars; Mario Maccaferri. Selmer designed a longer neck after Maccaferri left the workshop. We can call this a ’Selmerstein’.

Ç.Ö: We can call this guitar a combination of the efforts before us on the design and those that we made through our own experiences.

A.F: I think these style of guitars normally have laminated sides. Does it apply to this guitar? Can I ask about its specs?

The specs of this guitar are:

Ç.Ö: No. Hüseyin and I started to work with Briken more or less at the same time. We learnt the tools of the trade with him, but it was more of a friendship that taught us how to make guitars than mentor-protege kind of relationship. 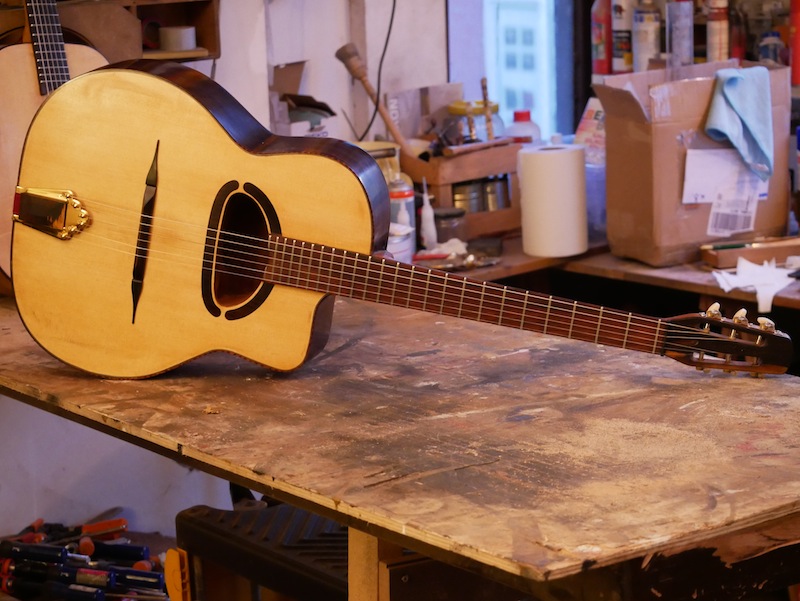 K.M: By the way, Briken is very curious about this guitar as well, I will take it to him as soon as possible.

Ç.Ö: Hüseyin was looking for somewhere to work at during that time. The same thing applied to us both, we were looking for a workshop to work at.

K.M: There is a friendship to speak of for sure, but I didn’t demand them to make me a guitar. I was happy when they brought me the idea. It was the beginning of 2018 when we decided to build this guitar and it was completed in a month and a half. It would have been finished earlier but the changes I asked for elongated the process.

A.F: A month and a half is still very fast when the process of guitar building is concerned.

Ç.Ö: The soundbox elongated the process.

A.F: Is this soundbox a technique that was used before?

Ç.Ö: It was done for the first time in Turkey. It is a technique that was first used by Maccaferri, it has been utilized since the 1930s.

K.M: The body and the inside of the body were done loyally to the ideals of that era. But that doesn’t apply to the neck. Selmer made guitars between 1932 and 1952. Mario Maccaferri worked with Selmer between 1932-1934 but they parted ways due to financial disagreements. He started to produce guitars called petite bouche instead of grande bouche after he left. The reason for this change is the fact that Selmer didn’t want to pay Maccaferri royalies for his design.

K.M: Exactly! It was by accident! François Charle wrote that he has never heard that Henri Selmer worked with Django Reinhardt in his book, which is questionable. Selmer made about a thousand guitars between 1932-1952, they produced those under Maccaferri’s directions between 32-34 and then switch to the oval hole and continue producing those until 1952. However, the economical situation caused by the WW2 forced the workshop to close down and the production stopped. The serial number of Django’s Selmer is 503. But Hüseyin and Çağdaş used the Selmer guitar with the serial number 807 as their prototype and it is a hybrid between that and their 1932 orchestra model.

Ç.Ö: We wanted to create a true hybrid. We wanted the neck to be bolted to the body at the 14th fret, we wanted the large “D” hole and the soundbox. François Charle’s book is an important source. Hüseyin and I studied this book closely and we want to Paris to buy his guitar blueprints directly from him. We studied our lesson well before we made the guitar. Even though Hüseyin’s background is in electric guitar, we wanted to work on a manouche guitar together. We actually used four different plans, we also have a tenor guitar we built in the process simultaneously.

K.M: Once a dream, now the reality! 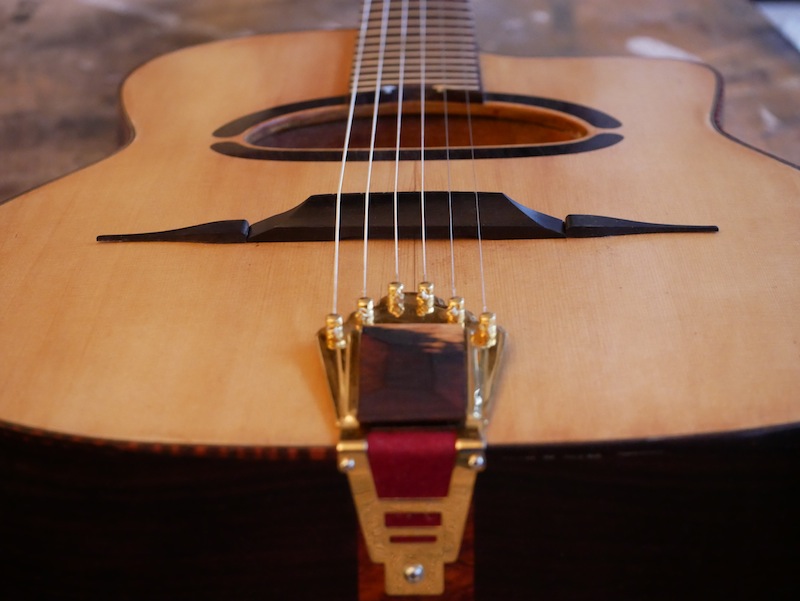 A.F: Have you built a manouche guitar before?

Ç.Ö: We built some guiters while ‘studying our lessons’ in the past year. This is our tenth guitar the I built with Hüseyin. We also have a type of travel size guitar we call ‘minnoş’ that guitarists can easily carry around.

A.F: By the way, is the usual production time one and a half months?

H.Y: This process is faster because we are two people. If we assume that the woods are ready for production (their humidity), a guitar can be built within a month with disciplined work. Of course, this process applies to acoustic guitars; it could be shorter for solid body guitars. But there is also a polishing process and we used tung oil—this polish has to be applied over and over again within a period which makes the process longer. We cannot say that this guitar’s polish is fully done, this is just the preliminary polish.

A.F: Would the polish you will put on change the guitar’s tone?

H.Y: It wouldn’t have a negative affect, we will not add a big amount of polish.

A.F: Do you have any plans to consider working on some other woods than you have used on this guitar? I have observed that especially foreign luthiers are inclined towards exotic woods like Koa or other local types of wood.

H.Y: Local trees like spruce (from Artvin/Borçka) and cedar are used as soundboards for acoustic guitars frequently but exotic woods are prefered for the back and the sides. Local walnut, mulberry, cherry or sycamore could replace these trees.

A.F: Mulberry wood is used for the local sting instrument ‘bağlama’ in Turkey but I haven’t heard of anyone using it to build guitars.

H.Y: We have such a project. Mulberry is frequently used for ‘bağlama’ and oud. We want to make a gypsy guitar with it.

Ç.Ö: Our mentors told us that mulberry wood was looked down upon, the same applies to sycamore. We made a manouche guitar with sycamore wood and its tone is really great.

H.Y: I am very interested in the subject of using local woods. I want to go to Anatolia to collect wood and to make guitars out of those.

Ç.Ö: We actually have two blocks of cherry wood we are waiting to dry out before we build guitars with them right now. We foresaw these when we got into this business.

H.Y: We actually plan to take a manouche guitar made out of mulberry or sycamore wood to the Django Reinhardt festival in June. 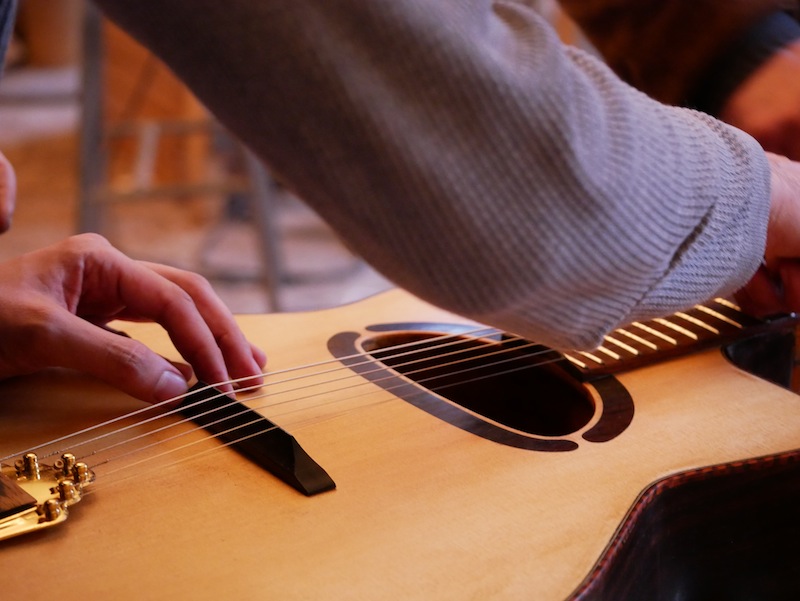 K.M: By the way, they are making me a double-necked guitar right one; one neck has frets and the other is fretless. This will be the first fretless manouche guitar.

A.F: What was your previous guitar Kaan?

K.M: Saga/Cigano GJ-10. I recorded the album with that as well.

A.F: Could you tell us about the story of the album?

K.M: I took a four-piece demo album with me to Samois Sur Seine Django Reinhardt guitar festival in France in 2014. We used Seyhan Argun’s illustration on the demo CD. We met Jon Larsen, the owner of Hot Club Records, by coincidence. He was very excited to hear that I was coming from Istanbul and said he wanted to hear my music. I presented him with the demo right away. Then I returned to Istanbul. I received an e-mail from Larsen a couple of days later; he wrote that he was deeply effected by my music. He first released my recording ”L’apres-Midi” – ”Onikiyi geçe” in the complication album of the festival, called Django Festival No:8. Then it was released as an eight-piece album called ‘L’Apres-Midi” under the Hot Club Records label. This was a dream for me because Hot Club Reocrds have signed first class gypsy jazz guitarists like Angelo Debarre, Jimmy Rosenberg and Stochelo Rosenberg in addition to myself. The album isn’t released in Turkey butis available digitally.

A.F: Do you have any plans for a second album? Maybe with this new guitar?

K.M: I had an idea about an album that would be released in Turkey. But we put that idea on hold when Çağdaş and Hüseyin told me that they built me this guitar so that I would be able to record the album with this new guitar. We will record traditional but not so widely known gypsy melodies with a modern twist soon. But I have a pop-jazz project before that. I have a piece I made the arrangement for, we will release some versions of it in a maxi-single. I will sing the vocals, that is the surprise! It will be a unique project. 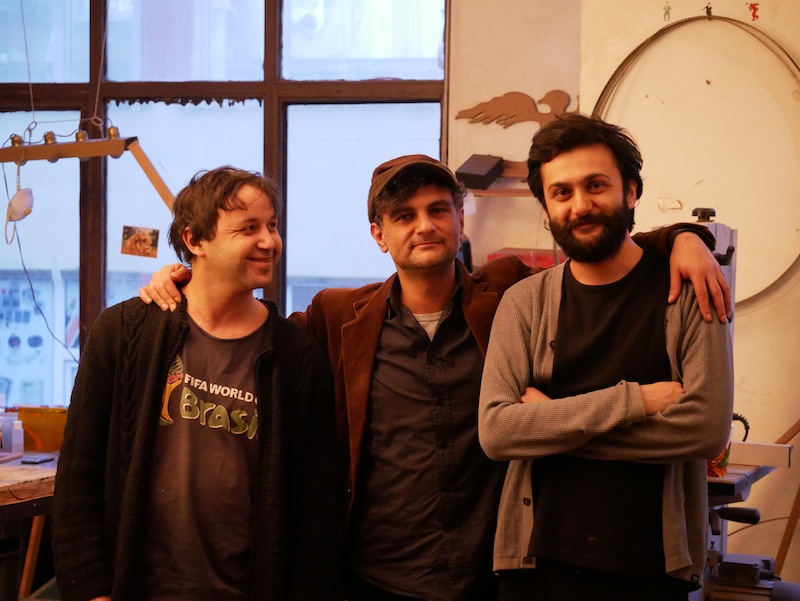 You can reach Hüseyin Yıldız on https://www.instagram.com/resifguitars/