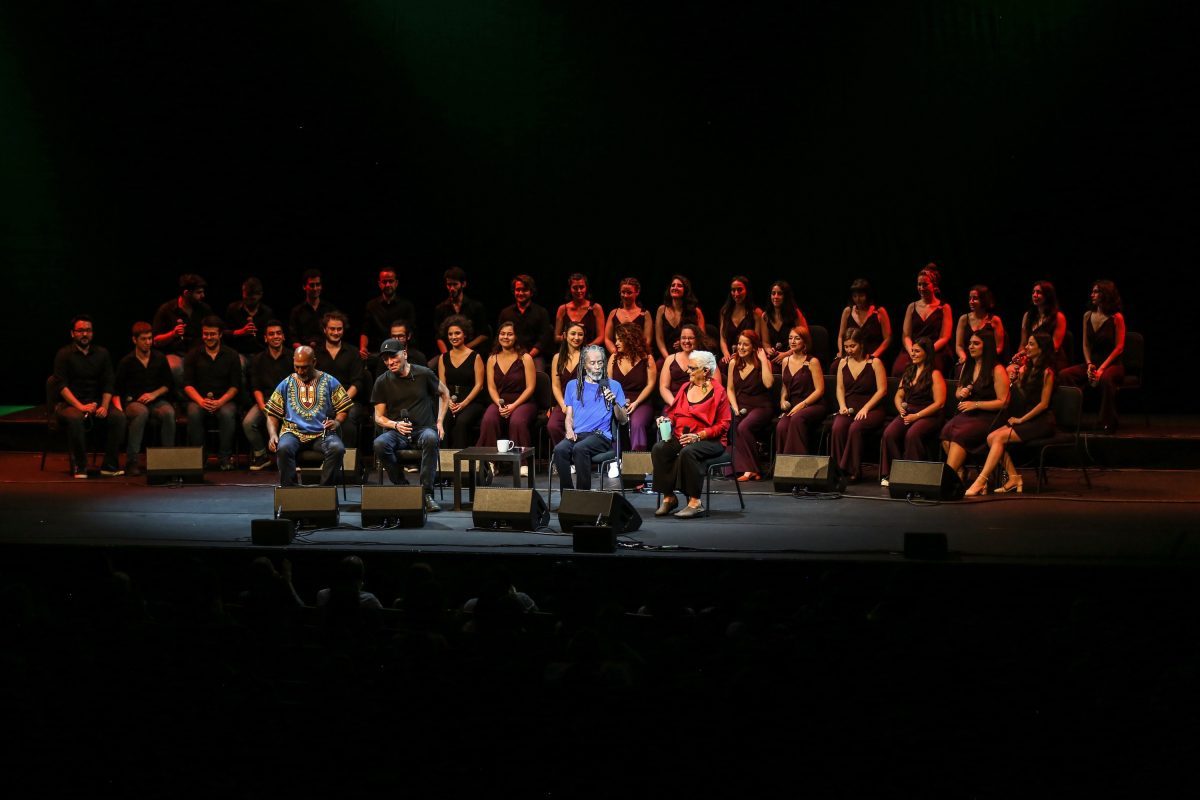 When Bobby McFerrin came to Istanbul for the 1st Istanbul Jazz Festival in 1994,  I was his guide. Those couple of days were not only some of the most memorable days of my life, it was one of the most special experiences of my career. When I introduced myself at the airport, with a compassionate smile on his face, he made a ‘one minute’ sign with his finger, took a small notebook out of his pocket, wrote something and handed it to me. He wrote, “I don’t speak the day before my shows and rest my voice, so today I will only speak by writing.” Indeed, he wrote all day and not just his own questions, but the answers to our questions as well. When I saw him the next day, the first thing I heard from his voice was my name. I think I will never forget how graceful he was.

This being the case, I wanted to interview him very much this time but I found out he doesn’t accept interview requests. I didn’t give up, at least I had see him, even briefly.  I asked Necati Tüfenk, his representative in Turkey,  but when he explained the situation,  I didn’t insist more.  He was an isolated person back then, he has obviously become fonder of his serenity in years. Two years after our Istanbul meeting, he came to Parliament Jazz Festival in Izmir and I was following the festival as a journalist. He didn’t come out of his room before and after the concert, so I couldn’t see him. I got carried away by his band and sought refuge in tequila, of course it didn’t end well, it was fun for anyone else but me.  Fortunately, I had grown up in years, so this time I contented myself with the joy of seeing him live. 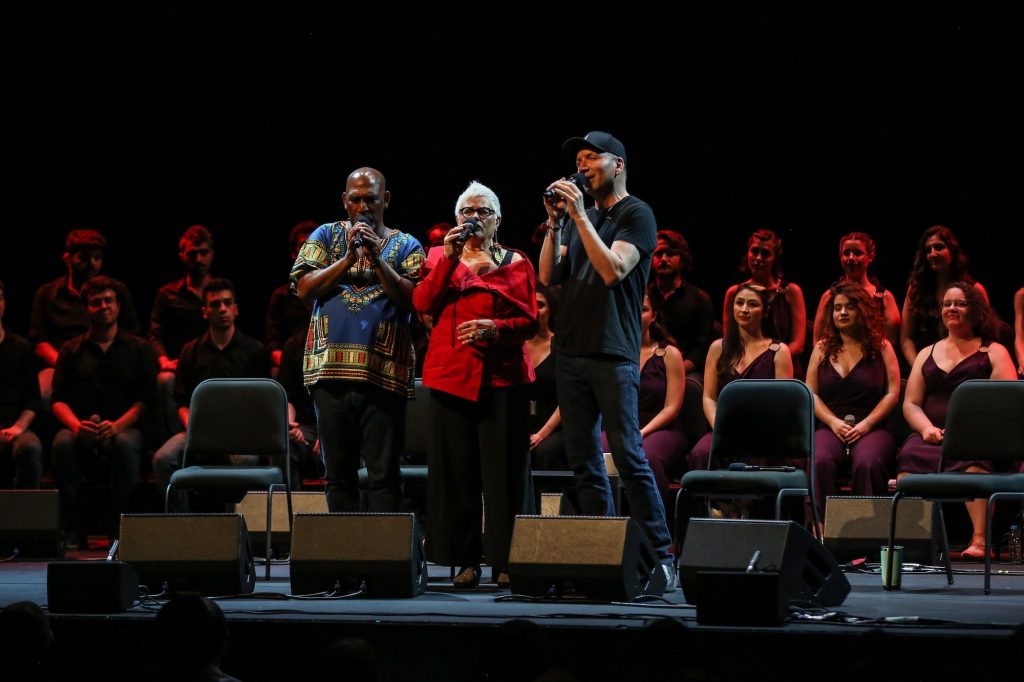 Bobby McFerrin was in Istanbul with three singers of Gimme5, formed with four members of the Voicestra group. The great Rhiannon -they have been singing together for over 30 years-, David Worm on mouth percussion, and Joey Blake on bass vocals. There’s also a choir of 33 young singers. As the choir was not mentioned in the publicity, neither I nor my friend cannot understand whether the choir is from Turkey or abroad. Yes, Bobby McFerrin performs with local choirs and it is not likely to go on tour with such a large team but there is such a harmony on stage, the choir cannot be from Turkey. Such a follow-up, such a flow can only be maintained after performing several times together, right? We don’t understand it’s not the case, until the concert is over.

When we go out of the concert, awestruck as we can be, we hear the choir members talking in Turkish and we go ‘Really??!!’ I go and congratulate Başak Doğan, the conductor of the choir and I make a short, ‘improvised’ interview.  The choir is Chromas; consisting of 6 bass, 6 tenors, 11 altos and 9 sopranos.  I feel the need of apologising for not knowing them, I really do. Afterwards, I see that they have achieved a lot with their own efforts.

– What? There was no rehearsal at all?

– We just sang for an hour before the concert. 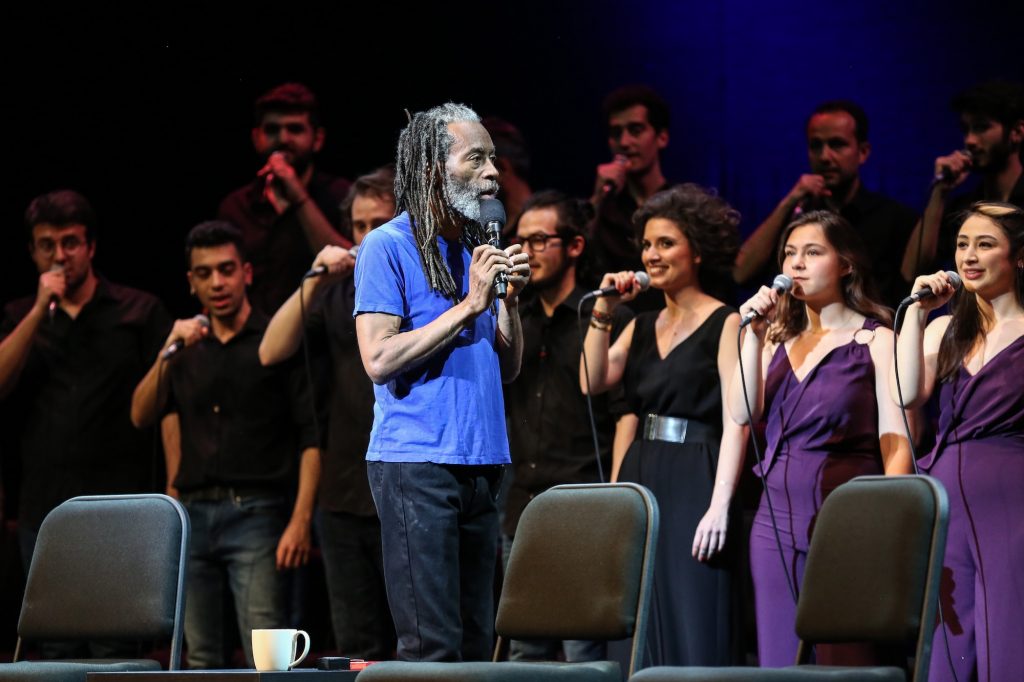 Okay, we know that Bobby McFerrin does this all the time, but how can it be possible to keep up with him so well? Başak Doğan, who had a master degree in Rhythmic Choir Conducting at Royal Academy of Music in Denmark, also had training on ‘Vocal Painting’ * method, based on Bobby McFerrin’s vocal improvisation technique, Circle Songs and they have been giving improvised performances with Chromas using this technique. Now I understand, because calling it only Bobby McFerrin’s magic would be underrating their performance.  At some point, Bobby McFerrin asks them to perform a piece of their own, that was not planned either. The arrangement and their skillful performance make our mouth fall open. Thank god that wasn’t improvised, otherwise I would have fainted dead away. The piece is called Tchaka, composed by Sydney Guillaume, written in Haitian and is about singing together.

I learn from Başak that Gimme5’s performances were also improvised. “Ok, but not Rhiannon’s song, right?  Because she sang with lyrics.” Wrong again, it was improvised and apparently she always does impro with lyrics. The intro was clearly improvisational, but I was pretty sure that the rest of the piece was written or at least performed before.  Especially the depth in the lyrics. If they came out in the moment, we must have witnessed a real channeling. 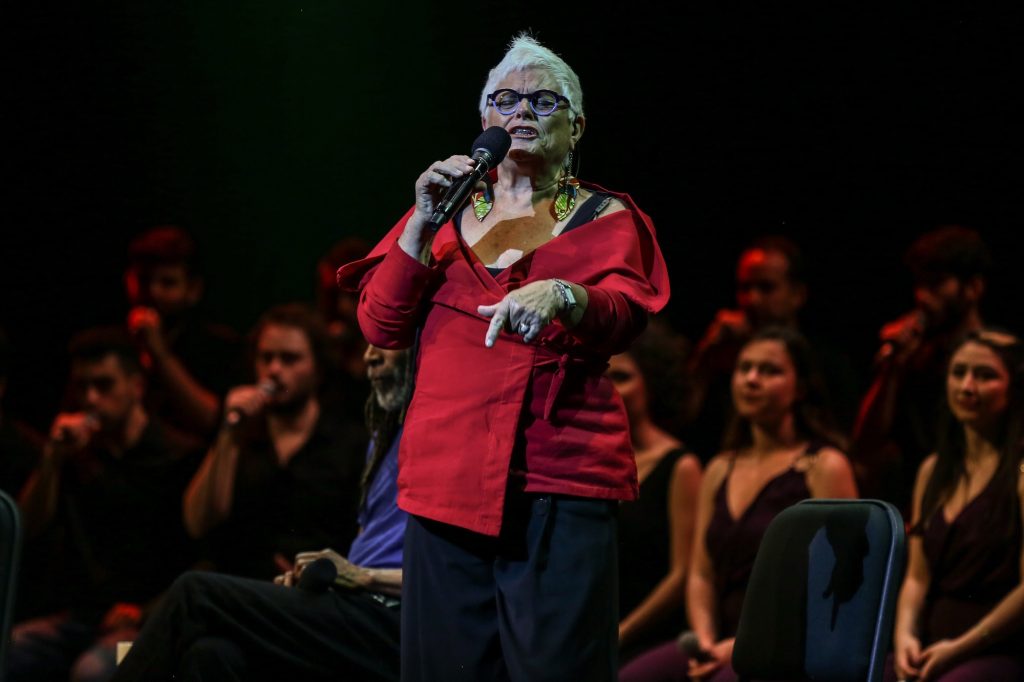 In fact, what Bobby McFerrin does is a kind of a channeling. While improvisation can be such a risky thing, him delivering so fascinating performances for years, making halls and stadiums full of people have ‘spiritual’ experiences, I can explain all these with that . Performances that can only be delivered by being a part of the whole. Although he says, “I’m not a musicologist or a soothsayer. I just love to sing”, I think what he does is divine.

Bobby McFerrin says that the first rule of improvisation is to have the courage to open your mouth and sing and keep going. Without thinking, just flowing I guess. The fact that he does not remember his performances after the impro concerts, also supports that because there is no mind, no plan, only flowing. There is such a focus in the center of his work; there is no identity, no mind, no ego, just the being. This must be energy consuming and makes it very understandable that he needs peace before and after the shows. 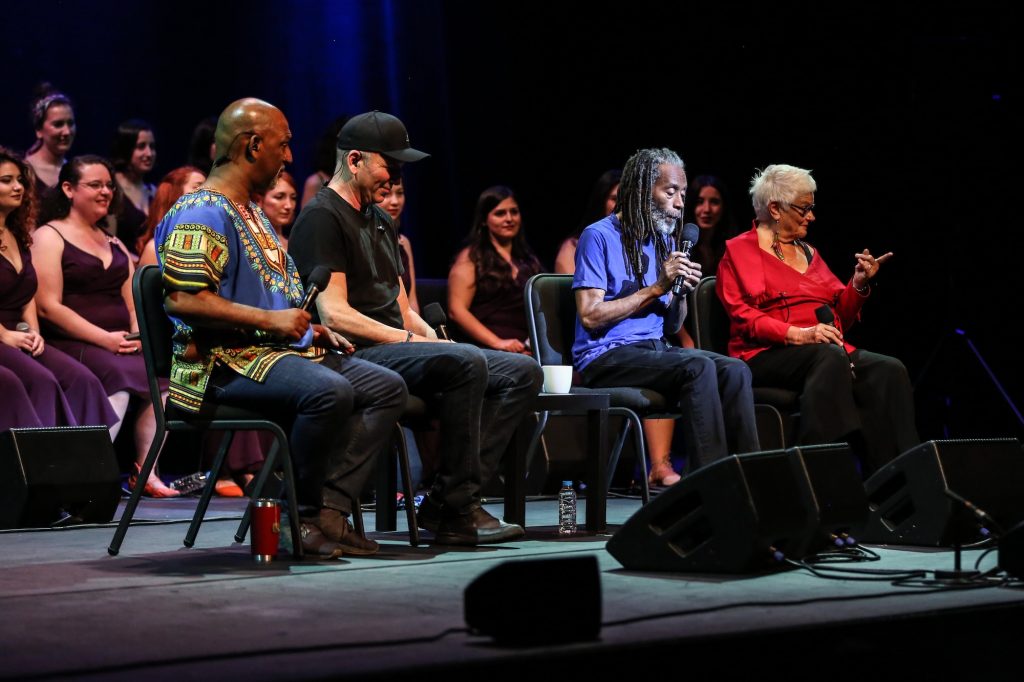 As in his every concert, we witness a ‘cannot be described but only experienced’  live performance. McFerrin starts with a non-verbal theme, divides the choir into 2, sometimes 4 and shares the roles. When Gimme5 members join as well, the overlapping themes form the layers of the songs and he sings over those layers with a conlang or simply voices. Effortlessly ranging from treble to bass, accelerating and decelerating, sometimes playful, supported with rhythmic breathing and body percussion, full of surprises but controlled as the performance was pre-planned.  4-5 themes revolve at the same time, no sign of cacophony, it feels that it can only be performed with such harmony if the piece was written. This is improvisation for god’s sake, it may not go as expected but it always does with him.

Bobby McFerrin conducted St. Paul Chamber Orchestra between 1994 – 2001.  Actually he still conducts, only now, his orchestra consists of human voices. Especially when David Worm on mouth percussion and Joey Blake with bass voices are engaged, you almost listen to a complete orchestra, you do not even feel the absence of the instruments. While looking at him and taking their commands Chromas members are shining through their eyes, how would they not? They don’t seem uptight or nervous,  they just follow and flow. This must be the sense of confidence that Bobby McFerrin creates. That’s the reason why, we cannot think that the choir is local. Wouldn’t they have a trace of  performance anxiety on their faces? No, they’re just enjoying the moment.

McFerrin does not communicate with the audience much this time, nor does he sing with them. While he has Chromas in hand, he probably doesn’t want to take risk with the audience that failed to keep up with David Worm, when he tried to involve them in his solo performance. In an interview, he says that it takes 10-25 minutes to focus again, after a performance that doesn’t go well with the audience.

He seems well when he sings, but in general, he’s looks tired and withdrawn. Most of the time he sits with his eyes closed when he doesn’t sing. It feels to me as if he’s disconnected rather than concentrated and that makes me sad.  I hope it is just the exhaustion of this being the last leg of the European tour. 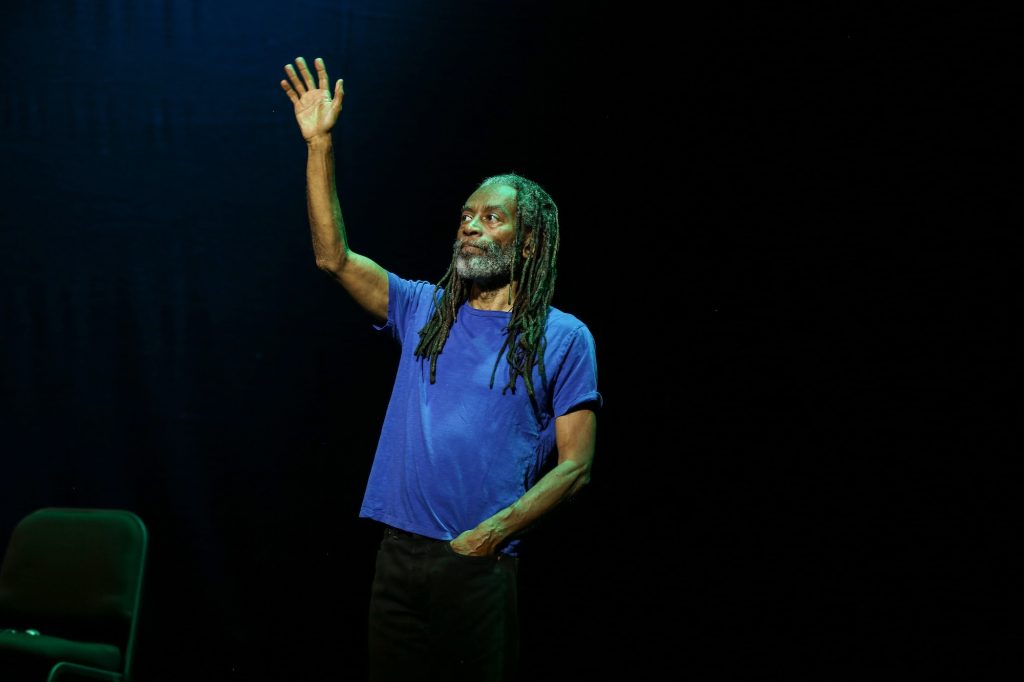 After a performance of one and a half hours, he thanks and leaves the stage. The audience is up, applause is not ceasing but McFerrin comes on stage just to thank again. He had already given the sign that he wouldn’t do encore by removing his wireless.

McFerrin said, ” We enter the stage empty, but we exit full,” I don’t know about them, but I leave the hall with a big smile on my face and filled with a deep gratitude I have for him.

Thank you Bobby McFerrin for everything you have added to my life, with your music and being…

Having introduced you to Chromas, I would like to tell you that they are looking for support for their European tour in June, which includes 5 concerts in Austria, Germany and the Netherlands. If you would like to support these beautiful, gleaming young people, please visit here (https://www.indiegogo.com/projects/chromas-avrupa-yi-renklendiriyor).

* It is a method that consists of 75 signs and allows the choir to perform music in a collective with non-verbal communication, improvisational singing and live composition.