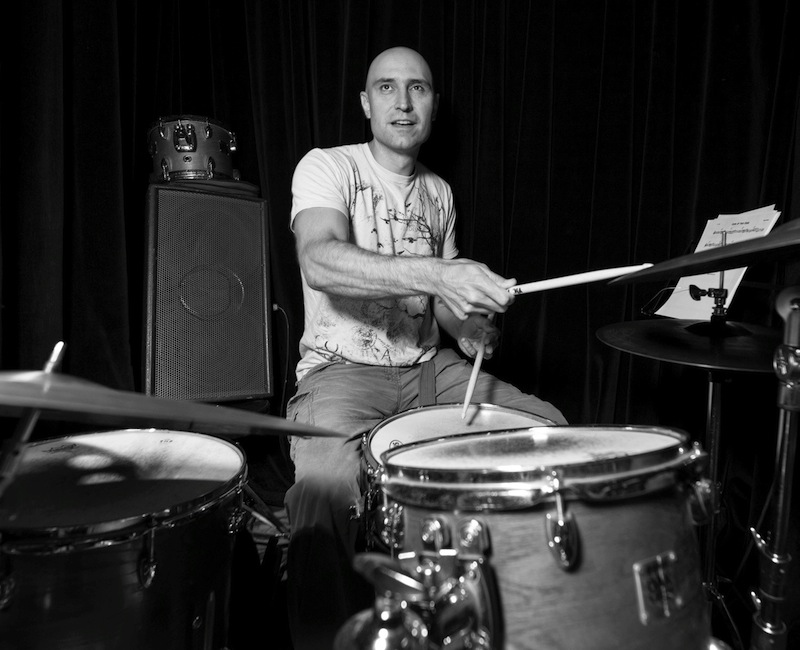 We are an hour and fifteen minutes to the south of New York. This is a great place for our young one, the profile here is mainly families with children like us, it is green all around, we are close to the ocean, have three lakes in walking distance, the education system is good, our kid goes to a public school, the yellow bus picks him up from the corner every morning.

The area we live in New Jersey has very little movement when it comes to music and jazz; the nearest musical center is half an hour’s drive away, Asbury Park, it is famous for rock clubs which fuel New Jersey’s Rock and Roll circles (like “The Stone Pony” where Bruce Springsteen had his debut).

When did you move to the USA?

How do you pass the time?

I spend my time mostly in my home studio. The first project to be born in the studio was a song in Turkish. My friends Selçuk Sami Cingi (Yüksek Sadakat), who lives in New York, and my old friend from Los Angeles, Tom Germain, who lives in Colorado right now, joined me for this project.

The first instrumental jazz recording we have done last year was “Home Alone”.

Two amazing musicians, with whom I miss playing together, helped me through this overseas production adventure. Sarp Maden, with whom I started my music journey, and Demirhan Baylan, whose work always sounds right on point every time we work together, joined me in this long-distance collective improvization madness. We played with Demirhan Baylan as a duo for the three instrumental jazz pieces that followed Home Alone this year. Demirhan creates magic with Fender VI, which is a variation of bass guitar (it is a bass guitar with thinner strings, which is an octave lower than bass guitar, and is usually played with guitar tuning). We can perform my compositions as a duo due to Fender VI’s ability to fulfill bass, melody and harmonics functions together. We plan to incorporate Demirhan Baylan’s compositions to this project and perform it in Turkey in 2018.

2017 is almost over, what do you have in plans for next year?

My plan for next year is similar to this year when it comes to recording sessions and new compositions. This plan is to release a single in Rock format (I owe this to the Turkish Rock audiences who have shown me so much love through the years), and continue the rest of the year by releasing instrumental, jazz and improvization-based singles.

With whom and at which venues do you play?

The performances in New Jersey continue with bands that play the standards and acoustic jazz. Eldad Tarmu group Sunday Afternoon Patio Party and PJ Parkerare some of the bands I regularly play with.

In addition to these local jazz performances, I also put together a New Jersey, New York band to play my own compositions with. Jared Pauley will play the piano and Chica Cabiora will play the bass. Selçuk Sami Cingi will join the band as a guest musician to perform the instrument-like vocals of some pieces.

May the groove be with you

At the age of twelve, Cengiz Baysal began playing drums when Sarp Maden, a leading guitar player in Turkey today, convinced him to start a band. Until that time, Cengizʼs only experience in music was the standard recorder and mandolin lessons he received in primary school. It was not long before Cengiz took on drumming passionately and got serious with his music. Two years later, the band they formed with the addition of Alper Maral and Tekin Kunt won first prize in a national competition held by the Milliyet newspaper. During that time, Cengiz took music lessons from guitarist Rene Macaroglu and drumming lessons from Cem Aksel. At the age of twenty, Cengiz went to the Percussion Institute of Technology in Los Angeles where he graduated with honors and received the “Most Improved Student” of the year award. Returning to Istanbul at twenty one, Cengiz had a chance to work with many Turkish jazz greats like Kerem Gorsev, Imer Demirer, Neset Ruacan, Tuna Otenel and Emin Findikoglu.

The following year, Cengiz returned to Los Angeles City College to pursue further music studies and soon after he became the drummer for the L.A.C.C. big band. During his L.A.C.C. studies, Cengiz received many awards and scholarships such as the “Albert Scholarship”, “Clausen Scholarship”, “Outstanding Scholastic Achievement Award” and the “Outstanding Service Award”. In 1995, Cengiz received his A.A. degree from L.A.C.C. and transferred to Berklee College of Music where he earned a merit scholarship. At Berklee, he studied with Casey Scheuerell, John Ramsey, Jamey Haddad, Ed Uribe and Kenwood Dennard. He had the drum seat for prestigious ensembles like the Art Blakey Ensemble with Bill Pierce, Thad Jones, Mel Lewis Big Band and the Hal Crook Jazz Improv Ensemble. During his studies, Cengiz managed a very active work schedule back in Istanbul taking some semesters off. He established himself as a studio musician and continued performing with Kerem Gorsev. In 1998, he graduated “Summa Cum Laude” from Berklee College of Music with a B.A. in Performance. After graduation, Cengiz spent a year in Los angeles where he worked as a TA at the Musicians Institute and became a Los Angeles City College Advisory board member. In LA, Cengiz performed locally with artists such as Sam Riney, Eldad Tarmu, Lazslo Cser and continued touring with his Berklee connection band “Audio Fact” who featured stars like Tiger Okoshi, Fernando Huergo and Okay Temiz.

Cengiz worked as a full -time music instructor at Istanbul Bilgi University from 2000 to 2006. After spending two more years as a part-time teacher, he had to stop teaching due to the demanding schedule of the Turkish rock band Duman. During his years in Istanbul, Cengiz recorded three solo albums. His first album, “Yildizlarin Ustunde” came out in 2002. The CD was listed as one of the most liked albums by Jazz Magazineʼs readers poll. Cengiz was also listed as one of the ʻBest drummersʼ and was voted one the ʻBest composersʼ by the same readers. His second album, “Candy and Milkshake” was published in 2005. The third album “Baby Steps” came out in 2013. Between 2005 and 2007, Cengiz has been the house drummer for the prestigious Istanbul Jazz Center. Being the house drummer, he had the chance to work with great artists such as: Lee Konitz, Mark Murphy, Dave Samuels, Alan Harris, Eve Cornelius, Chip Crawford, Dena De Rose and Paula West. Notable artists that he has worked with as a sideman include: Mercan Dede (2003 European tour), Kerem Gorsev, Oguz Buyukberber, Ayse Tutuncu, Demirhan Baylan, Tuna Otenel, Okay Temiz and Izmir Symphonic, Cemal Resit Rey Big band, Nicholas Simion, and Nguyen Le.

Cengiz also recorded as a studio drummer for countless projects. One of these projects, the second studio album of the Turkish rock band Duman “Belki Alisman Lazim” became a huge success and established the band as a leading rock band in Turkey. The band wanted Cengiz to record for their next studio album “Seni Kendime Sakladim” and this album has become a miles stone in Dumanʼs career. In 2007, Cengiz was offered the drum seat for live performances. His work with Duman was appreciated by larger audiences and he was listed as the ʻBest drummer in Turkeyʼ by Volume Magazineʼs 2008 readers poll. In 2009, Duman put out a double album “Duman 1 and Duman 2”. Cengiz contributed two songs to the album and became a permanent band member. In 2013 Duman published “Darmaduman” album which brought them “The Best Band in Turkey” award in Altin Kelebek TV and music awards.