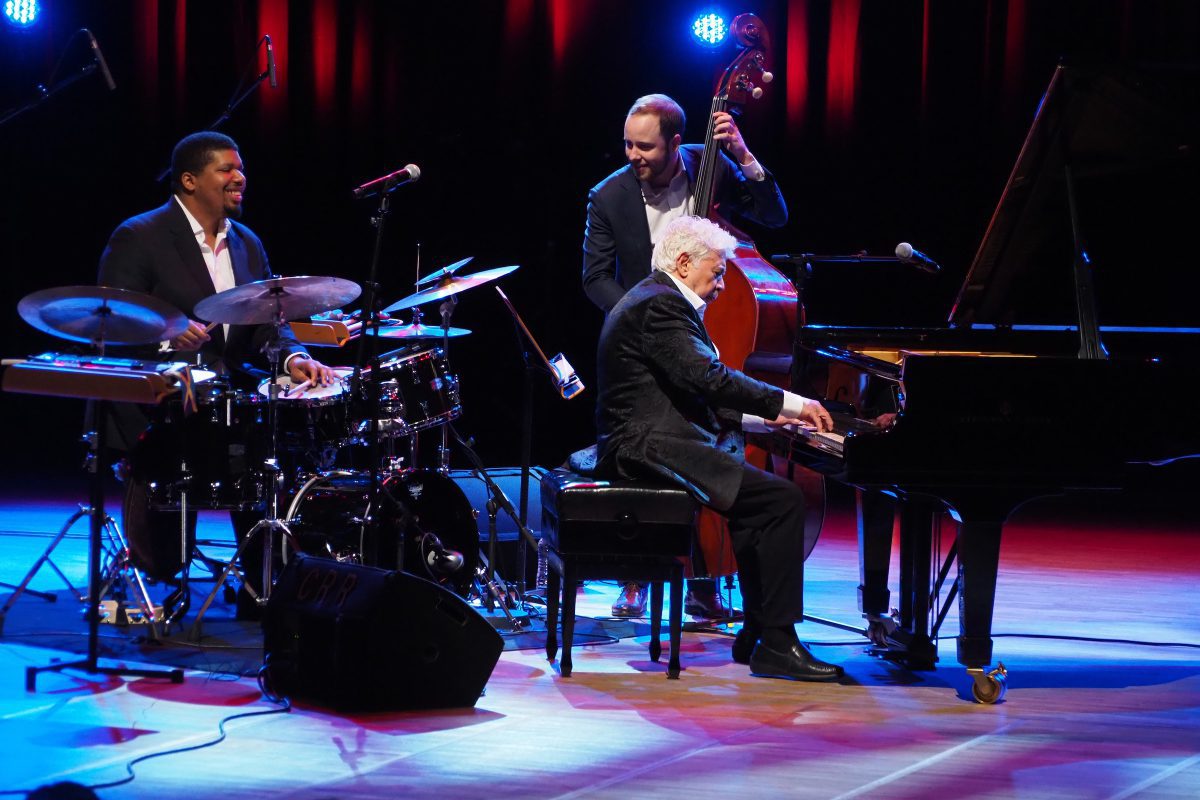 Cemal Reşit Rey Concert Hall took its audiences on a jazz journey from Brazil to Jamaica with its concert series between 21-24 February. Dizzy Gillespie Afro-Cuban Band was on the stage on the 21st of February, Friday evening. John Lee, the bassist who played in Gillespie’s bands during the 80s, is the leading name in carrying his tradition. This project can be encountered both as Afro-Cuban Experience or Afro-Latin Experience during different occasions. The band we listened to had Sharel Cassity on the sax and flute, Freddie Hendrix on the trumpet and flugelhorn, Abelita Mateusb on the piano, Roger Squitero on percussion and Tommy Campbell on the drums. The band started strong with Toccata and played pieces that identify with Dizzy Gillespie as well as Brazilian hits. This Brazilian side of the concert, which included classics like Desafinado, was good but wasn’t extraordinary. On the other hand, I think the unexpected interpretation of Blue in Green was the weakest part of the concert. The piano intro did not correspond to the gloomy atmosphere of the piece and was stagnant. It was evident that the band tried to keep the Latin elements light and didn’t want to suffocate the original, though I thought its foundations didn’t work out. It might be the best not to mess with Blue in Green too much. Lalo Schifrin’s Long, Long Summer and the interpretations of Tin Tin Deo near the end of the concert were the most representative of the band and concert’s essences and were among the best. Trumpet player Hendrix was in the fore ground as his role in this concert required him to be and the sparks in his playing style were the most interesting elements of the concert. Its effect were dampened during the parts where mute was used, but he was the main person who kept the majority of the concert alive. It is worth noting that saxophonist Cassity and Hendrix sounded great together in the lime light and played with an almost perfect harmony. This duo made the music worthy of the cubop soul. Pianist Mateusb did play beautiful passages but was a bit bookish and not as “explosive” as one would expect to hear in this music. The same thing applied to the percussion. The percussion instruments were supposed to be more bright and should have traded with the drums. It seemed like the band wanted Campbell to be more dominant in the rhythm section. I can ultimately say it was a concert that started off good, seened to lose its energy during the middle and got back into shape near the end.

Monty Alexander was on the stage on the 24th of February, Monday evening, accompanied by double bassist Luke Sellick and drummer Jason Brown. Alexander is a pianist who has recorded countless albums and has been active since the 1950s. Older generation musicians from outside the US, who made their presence known on tough jazz stages, are really valuable. Those who follow this musician expected a concert that would be fun with allusions to his roots, and that’s what happened… We listened to a substantial amount of blues and reggae. Alexander likes to make references to the standarts with short sentences within pieces, he followed this recipe this time as well. Marcus Garvy, Hope, Monk’s Brilliant Corners and Hurricane, in which Alexander describes a hurricane drawing close, were among the pieces that were memorable. We should also mention No Woman, No Cry, which always stirs up some excitement among the members of the audience. However, those who expected the concert to take an enlightening direction at some point were probably disappointed despite all these nice points. I believe that the facts that the concert become too potpourri-like during some parts or that it only progressed around basic modulations caused it to stay a bit below expectations. It was great to listen to Monty Alexander on the stage despite all this. Ultimately, it is necessary to watch iconic jazz figures’ live performances. I should also mention that drummer Brown’s touch and his solid accompaniment showed that he is good that detail work. We noted down his name in order to listen to him in another formation in which he can find more movement space… I can recommend listening to his latest recording Wareika Hill, in which the pianist interprets some Monk pieces, to those who weren’t able to go to the concert. The album is a good reference to how Alexander brings together the Jamaican flag he “carries” (literally, on his melodica, during the concert) with jazz.

A selection of pieces performed during the Monty Alexander Trio concert