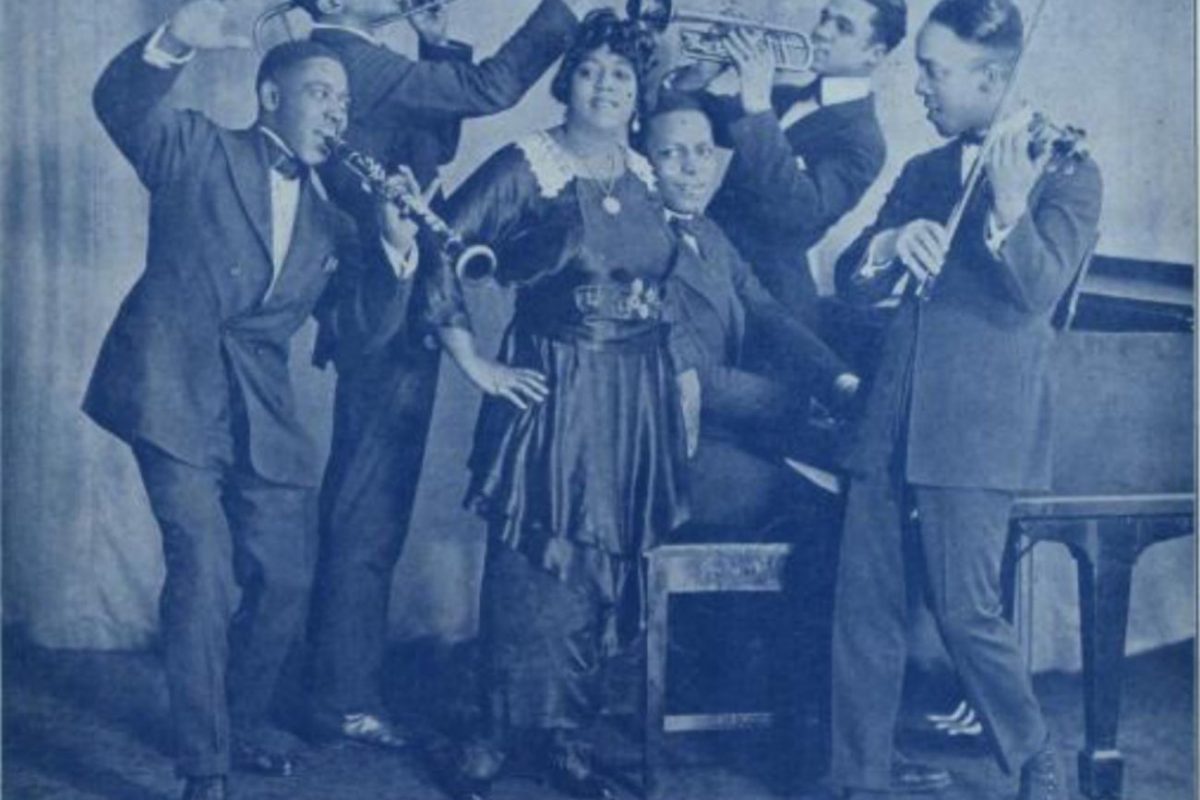 The importance of the first jazz LP ever recorded was emphasized in 2017 during the celebrations for “the 100th anniversary of the birth of jazz”, when the word was “jass” instead of “jazz”.

The historical 78 rpm recording in question also pointed to the formation of Original Dixieland Jazz Band, founded by Nick La Rocca in New Orleans, but unfortunately there is no one single starting point, like the first sighting of a swallow pointing to the coming of Spring, when jazz is concerned. That is why several years had to pass until the release of what we can call “classical rock” recordings such as those in the famous era of King Oliver, Louis Armstrong, Jelly Roll Morton, or at least until these musicians got popular. The first Afro-American musician to record an instrumental jazz album was Kid Ory; this recording was a piece titled “Kid’s Creole Trombone” and was released through the mysterious recording company Nordskog in California.

The recording industry opened its doors to Afro-American music and musicians thanks to another recording whose impact outshone the record held by ODJB. The reason for the success of “Crazy Blues“, written by Perry Bradford, sang by Mamie Smith and recorded on the 10th of August 1920 by OKeh, was the discovery of the recording industry that there was an untapped population that could and would buy these recordings. This mass culture mentioned consisted of Afro-Americans who migrated from the agricultural cities to the Northern industrial cities as a mass. Ten-thousands of these people underwent a transformation from agricultural workers to factory workers, moving from their hometowns in order to be able to work in the service sector. They have always been willing to spend the fifty pennies they had on a music genre that represented their own culture.

The success of “Crazy Blues” came from the discovery of the recording industry that there was an untapped population who would buy these recordings.

Musicians who grew up with Afro-American media and ragtime were trying to convince recording companies to invest in black artists and their repertoires, however it was up to OKeh to demolish the wall of prejudice which existed in those days. The company was founded by the president of the American branch of the German firm Odeon Records, Otto K.E. Heinemann. (The name of the company was often misspelled as “Okey”, but it actually comes from the first 4 letters of the name of its founder). Heinemann saw the importance of the “ethnic” market clearly, leading him to producing LPs in German, Czech, Polish, Swedish, Italian and Yiddish, designed to attract the immigrant populations living in America. This way, some recordings were important directly from Europe while the others were reproduced in New York by OKeh. Heinemann and OKeh’s musical director Fred Hager managed to bring headhunter Ralph Peer’ from Colombia and offer him a job: Peer facilitated the first blues and country recordings of Buddy Holly and Agustin Lara. He accepted Perry Bradford’s offer and decided to record “Crazy Blues” by Mamie Smith and “Jazz Hounds” on the 10th of August 1920 and released the album in November of the same year. On the other hand, OKeh’s real success came from the addition of the pianist and composer Clarence Williams to its roster: Williams was hired to manage the “Race Records” department which was founded to release albums recorded by black musicians and to be sold to Afro-American populations. OKeh was also a member of Carl Lindstrom’s international platform; this enabled OKeh recordings to be distributed in Europe by their family companies Odeon and Parlophone, making their influence on their European audiences grow exponentially. 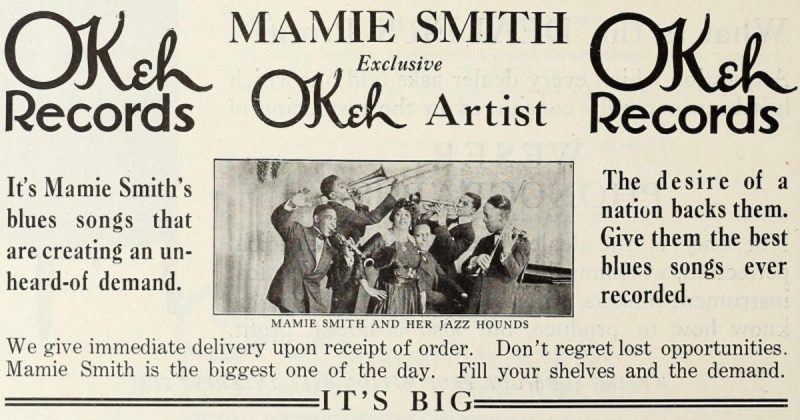 Mamie Smith started her career as a dancer when she was a child and continued as a singer when she came to Harlem, making her an experienced contributor of the Afro-American show world with a professional career that exceeded twenty years. Perry Bradford started out with minstrel shows and then came to New York, working hard to become successful in various areas of the music industry and especially the show world dominated by the blues after the release of “St. Louis Blues” composed in 1912 by W.C. Handy. Perry Bradford’s “composition” “Crazy Blues” was possibly even older; the piece was based on the explicit lyrics of “Baby, Get That Towel Wet”; the same song was adapted by James P. Johnson for “Mama and Papa’s Blues”. On the other hand, Bradford used the same song while composing Bradford “The Broken Hearted Blues” (1917), “The Wicked Blues” and “Harlem Blues” (1918). The piece was performed by Mamie Smith with its final title for  the magazine called The Maid of Harlem in the theaters of New York; this live performance showed that an Afro-American musician can finally make a blues recording and that adamancy is needed against recording companies, giving Bradford inspiration in this idea.

Victor Records only recorded a single demo with Smith but decided against working with Smith on anything other than this demo due to the enmity of the majority of the population and the music industry against “black” music performed by black musicians. Hager and Peer, on the other hand, decided to work with this idea and recorded “That Thing Called Love” and “You Can’t a Good Man Down” in February 1920 as a 78 rpm LP with OKeh 4113 label. Both of these pieces were written by Bradford, but they weren’t blues; it was even performed by a band which is believed to consist of White musicians. The album wasn’t a flop, its success was enough to encourage the initiatives that followed. 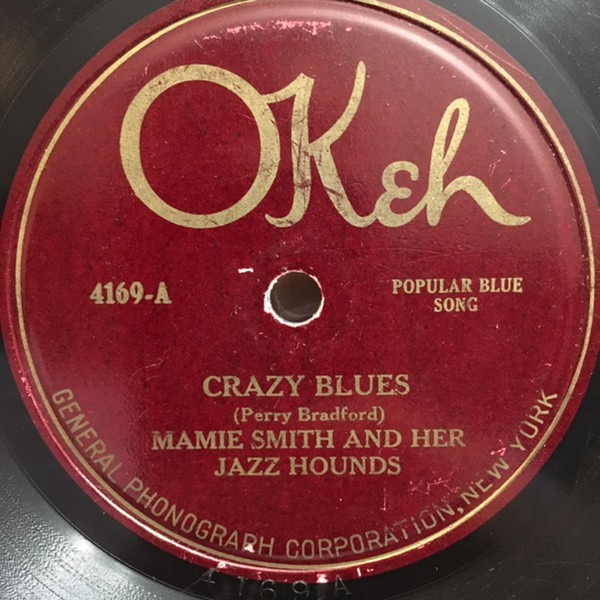 However, the first edition of the recording by Mamie Smith and her band, released by Bradford, showed Willie “The Lion” on the piano in the photo as if to prove the version of the events as written by “The Lion”. The photo also showed a cornett player in “Jazz Hounds” that day in the studio. According to “The Lion”, this cornett player was Addington Major, while according to Bradford and most jazz historians, the real founder and star of this band of musicians was Johnny Dunn, who isn’t seen in this photo. The other members of the band were: Ernest Elliot on the clarinet, Dope Andrews on the trombone and Leroy Parker on violin. Nevertheless, we will never know the accurate information about the details of the recording process due to the fact that OKeh’s recordings did not survive.

The only thing we are sure of is the fact that Mamie Smith recorded the piece called “Crazy Blues” with a band of Afro-American musicians on the 10th of August 1920. 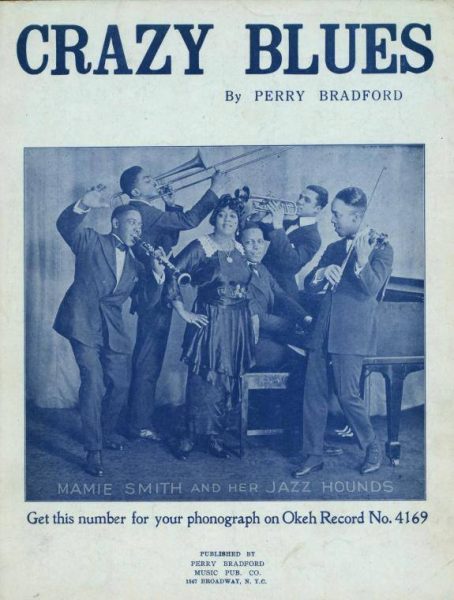 The only thing we are sure of is the fact that Mamie Smith recorded the piece called “Crazy Blues” with a band of Afro-American musicians on the 10th of August 1920 and this recording was released in November with 4169 label by OKeh, changing the popular music understanding in United States forever. The piece isn’t a conventional blues song despite its title, it carries the traces of musical theater culture. Traditional 12 bar blues is added to the 16 bar form seen in classical American songs. The 4 bars in the intro are followed by the 16 bar song form, then 12 bar blues and then again 16 bar song form, adding up to six chorus with two more 12 bar blues and again 16 bar song form before the coda. “Ah these blues…” 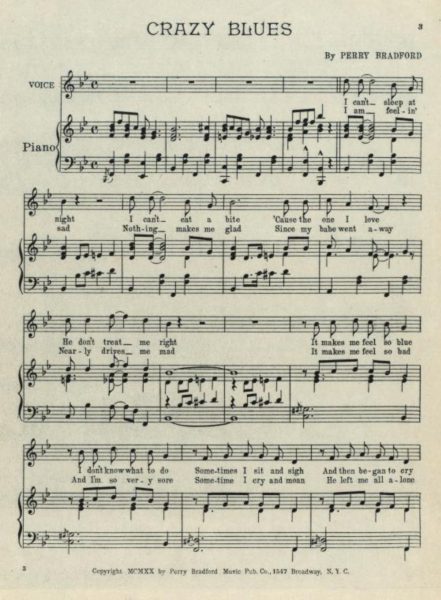 The song is written down in its entirety; Mamie Smith’s mid-tempo singing, vibratos and glissandos emphasized with the trombone and violin, enabling Smith’s unique style, which utilizes opera and folk music techniques, to come into focus. The “Crazy” in the title isn’t merely an exaggerated joke: The lyrics “There’s a change in the ocean/ Change in the deep blue sea” which allude to Shakespeare’s The Tempest, are followed by dramatic expressions like “Now I can read his letters/ I just can’t read his mind/I thought he’s loving me/ he’s leaving all the time” and lyrics mentioning suicide, violence and drug addiction “I’m gonna do like the Chinaman/ go and get some hop/ Get myself a gun/ and shoot myself a cop”, describing real love in all its craziness.

Another important reason for the success of Blues is the way it alludes to a dark side of the psyche, intermingled with obsession, while also embracing the “dark” atmosphere of famous lyrical operas such as Rigoletto, Cavalleria Rusticana and Faust without limitations in contrast to the saloon romanticism of Stephen Foster and the “popular” music of the 1800s.

Another important reason for the success of Blues is the way it alludes to a dark side of the psyche, intermingled with obsession, while also embracing the “dark” atmosphere of famous lyrical operas such as Rigoletto, Cavalleria Rusticana and Faust without limitations in contrast to the saloon romanticism of Stephen Foster and the “popular” music of the 1800s.

Even though the numbers mentioned about the sales of this recording are exaggerated, this piece achieved great success in its time and it was claimed that 75000 copies were sold within two months. OKeh founded a studio in Chicago with the money earned with this recording and went on to record albums that included Louis Armstrong’s Hot Five and Hot Seven etc. which made up the “Race Records” catalogue. The other recording companies copied OKeh and released recordings featuring female blues singers, sometimes even using the last name Smith, in a dizzying speed. Following the strategy of Smith, Blues Empresses like Ada, Clara, Bessie Smith etc. started to rise to fame in the show world. Mamie achieved great success until the mid-20s, continued to give live performances until 1931 and then disappeared from the recording industry. She reemerged ten years later but this time she could be seen in musicals, soundies and movie screens until 1942. She passed away in 16 August 1946, living a poor life following the success of this 26-years old recording which made her famous, and was buried in a mass grave.