Esra Kayıkçı is a jazz vocalist. She can also play a variety of instruments. She started singing at a very early age, but studied archeology as her college major due to her interest in the field. She then turned her gaze upon music once more, because music ended up being indispensable for her. She won many competitions and proved herself in this field as well.

She released an album called “Bozgun Hatıra”. This album includes her own compositions. Esra Kayıkçı, who says that she sings even while walking on the street, also likes writing lyrics. “I sing on the street. This attracts the attention of many people; the fact that there is someone constantly humming behind them. I get some great ideas while walking on the street.” Aside from this, she also likes singing improvized melodies with her guitar when she is alone in a room, and creating music out of those melodies. She explains this as “Because that is when I let myself go free.”

I was introduced to music at a very early age like many people. There were no musicians in my family, there still isn’t. However, everybody enjoyed singing, especially my aunt. I have listened to her a lot. I grew up singing as well. Then we got a keyboard, called an ‘organ’ back then, in the house. I started my music life by playing melodies by the ear on that keyboard by myself. But I studied archeology; I was very curious about this field. Because it embodies many discoveries as a branch of science. I have always been drawn by the remnants of civilizations under or on the ground, and under or on the water. Music went hand in hand with that in the meanwhile.

From Arabesque to Jazz

My father listened to arabesque music; Orhan Gencebay and Ferdi Tayfur. Classical Turkish Music was also frequently listened to, especially Zeki Müren, followed by Emel Sayın. We would also listen to Nilüfer and Sezen Aksu in addition to these musicians, of course. I grew up listening to these. I have an uncle who is 12 years my senior; he was more open to new and foreign genres. I was probably around 8-9 years old when I found a cassette in his house. It was a rock and roll cassette. The moment when I discovered that tape is very special for me, because it influenced me a lot and I would constantly dance to it.

After Rock and Roll

Ceylan Ertem used to have a program called ŞubidaP. She used to host Turkish jazz musicians on it. I discovered Elif Çağlar through that program, and I started to study with her. I was very motivated by the fact that this music was also created in this country. I wanted to go ahead and start singing jazz. 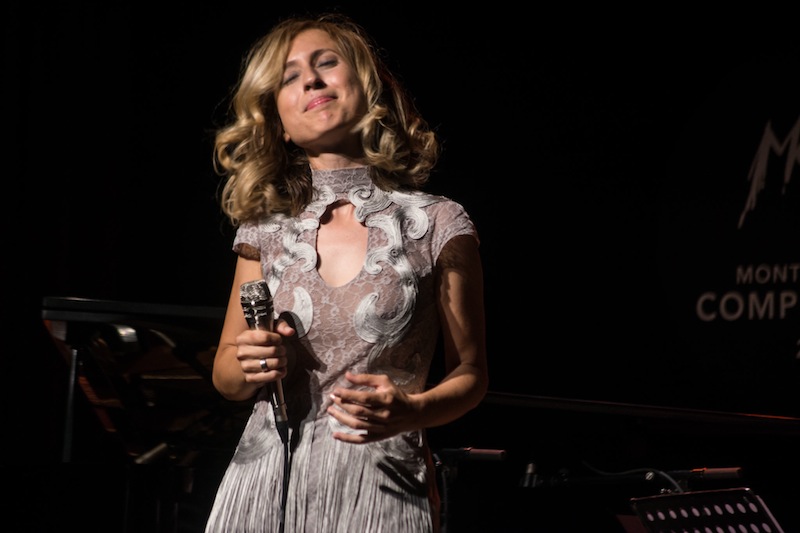 Starting out with Bossa Nova

We played Bossa Nova pieces with my husband Hakan in 2008 for the first time. We actually started out with Bossa Nova. I have been singing since my childhood (and yes, I would sing in front of the mirror as well) but I felt as if I should play an instrument instead since I wouldn’t be able to sing. That’s why I seriously studied playing the guitar. Then I started to sing in a serious fashion as well.

I play the double bass, flute and a little piano in addition to the guitar. Singing jazz is freedom! Because I can interpret any jazz piece I desire in whatever way I want. Jazz gives one that space. That’s why it has been very special for me, I still have a lot to learn. It makes me happy to be able to create melodies and rhythmic sentences of my own choosing within that freedom. I also like Turkish jazz. We have an example in my album called “Ay Işığı”. Its lyrics were written by Mehmet Karadağ. I think it is vey enjoyable. Why not sing in Turkish? It works out great if you abide by the prosody properly.

I wrote the lyrics for my album Bozgun Hatıra with Mehmet Karadağ. Mehmet is my childhood friend, that’s why we embarked on such a project. We worked on the piece called Paçavra first, its lyrics belong to Mehmet. He also wrote the lyrics for Bozgun Hatıra. It is representative of the theme of the album, that’s why we wanted to choose that. It was a special and different title. Because there are elements of sadness and hope at the same time in the theme, just like in all the other pieces in the album. That’s why it ended up being called Bozgun Hatıra.

I would like to mention something I have discovered through this album. A lot of people wrote to me saying that they have started to listen to jazz after listening to Bozgun Hatıra. This is such a great thing. That means we should make people like jazz. We should make it heard. We already try to promote it more as much as we are able to. I think the Turkish saying “don’t jazz” (a negative phrase meaning to be irritatingly loud and vocal) is slowly disappearing. This genre has a bigger audience now including the younger generations. There are very productive musicians and young people have started to follow them. They are influenced and motivated. I am also motivated by my friends’ music.

People might have a point in approaching jazz timidly, because we hear different sounds in this geography. We warm up to sounds the more we listen to them. Jazz is a genre that requires a lot of effort to learn about. It requires some level of education. I hope that we will have more opportunities to study this music in the future. Education is important, so are meeting other musicians and working with them. Jazz requires you to constantly improve yourself; you have to keep on learning. Nobody reflects a different version of themselves. Jazz is actually a very natural form of music. That’s why jazz musicians aren’t different or elite people.

The Essense of Life: Aşık Veysel

I listen to and am influenced by Âşık Veysel a lot. I watched a documentary directed by Can Dündar. What an incredible life. I believe that I have a lot to learn by listening to him. I took part in Montreux Jazz Vocal Competition. I sang Âşık Veysel’s folk song called Uzun İnce Bir Yoldayım there. Filled with so much life energy. His music might be the essence of life itself.