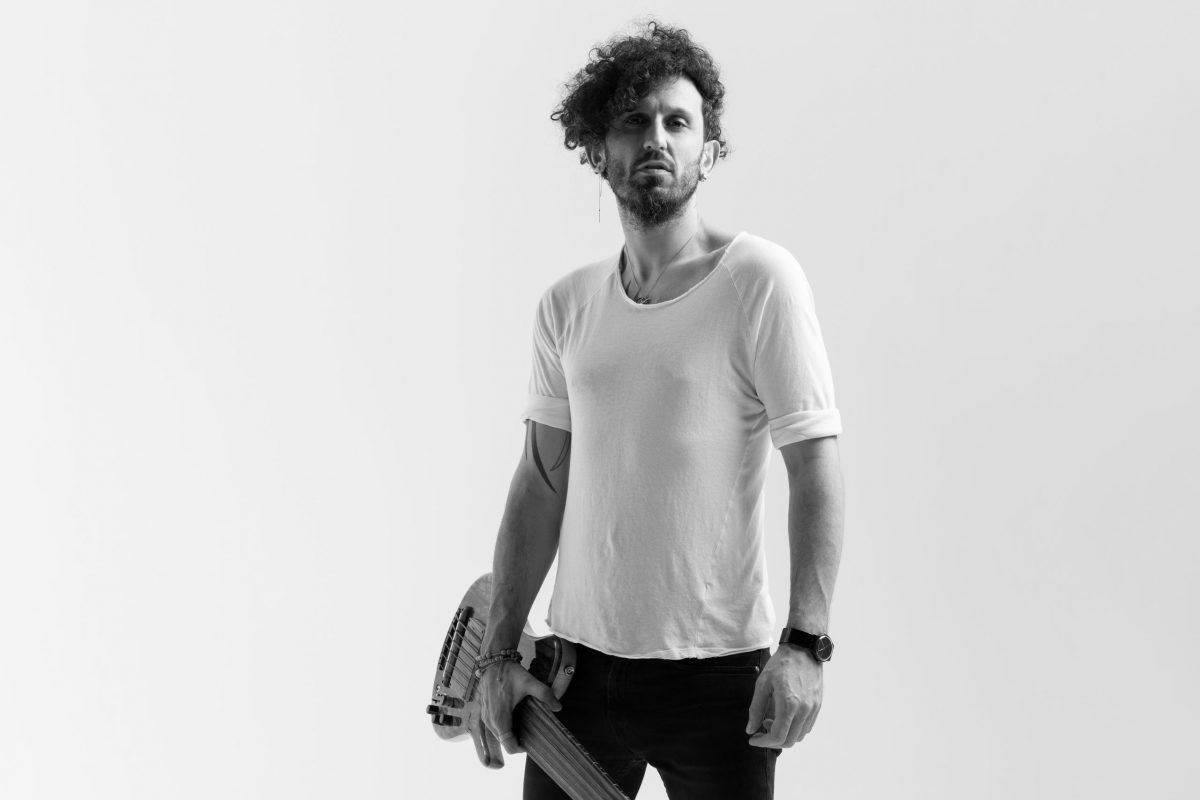 Prominent bass guitarist Erhan Ertetik has created a following in Turkey with his many projects, which includes the jazz fusion band Cazzip Project. He released first solo project “Dududa” recently. “Dududa” consists of 4 pieces which showcase Ertetik’s mastery of the bass as well as his talents as a composer. The musician is accompanied by Nevzat Yılmaz on the piano; Volkan Öktem, Ersin Gülseli and Cengiz Tural on the drums; Berkan Kaya on the keyboard; Cem Çatık on the guitar; Ali Emre Algır on percussion and Duru And on the vocals. Ertetik dedicated the emotional composition titled “Fretless Words” to İsmail Soyberk, an esteemed bass guitarist who recently passed away. Good luck with your new album and I hope we will get to watch a launch concert soon.

Firstly, how did your music life start? Did you have any family members who were musicians or were interested in music in general? How did you pick up the bass guitar?

My brother Burak Ertetik is my role model, I tried to copy whatever he did. He played basketball, so did I; he played the drums and that’s how my interest in music started. A pop album I listened to during my high school years was the reason I became aware of the bass guitar. I was taken aback by the sound of this instrument and it got my attention when I learnt that it was a bass guitar. My brother surprised me and bought me my first bass guitar and this is how this adventure started.

I know that you graduated from Mersin University with a degree in psychology. How did your studies in this field contribute to your life?

Yes, I was very interested in philosophy and psychology during my high school years. My teachers wouldn’t even give me exams! I wanted to study psychology upon my graduation and enrolled in Mersin University. I actually wanted to study at Galatasaray, that has always been a dream of mine. Being a psychology graduate leaves many marks in your life. I experienced many advantages in creativity and people relations in the world of music. We all know the hardships of being an artist in Turkey! I believe my knowledge in psychology kept me on my feet in this aspect.

Which teachers did you have the opportunity to work with during your music education?

I had many valuable teachers in this adventure; I still do. I first worked with dear Raci Pişmişoğlu. Then I studied the bass guitar with dear Eylem Pelit at Modern Music Academy. I can say that the turning point in my music life happened when I started to learn harmony. I can easily say that my dear teacher Güç Başar Gülle enriched my music career at this point. I briefly worked with bass virtuoso Dominique DiPiazza.

I learn a lot from the musicians I share the stage with. Playing music is sharing. I really enjoy talking about music on the stage, before or after playing a gig as we drink coffee. 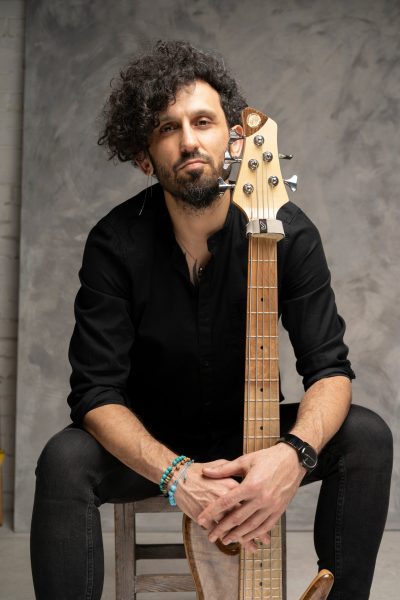 How was the recording process? Are there any sounds or musicians who influenced your album?

I have been dreaming of this project for many years. I postponed this solo album due to feeling inadequate sometimes or due to general business. It is a great feeling to finally present the listeners this work that I shared with many valuable musicians through a great recording process. It consists of compositions I have written through the years. Everybody experiences breaking points and changes in their lives. Dududa consists of pieces I have written during such periods. Different styles of compositions emerged due to the mental changes I have gone through and different musical influences I had. But generally speaking, fusion is the most important genre I want to play and am influenced by, we can see that in this album. I am especially influenced by Matthew Garrison, Junior Braguinha and Hadrien Feraud.

You wrote the arrangements in addition to being a composer and soloist in this album. Did you have a certain approach as you arranged the pieces?

The arrangement aspect starts when you decide on the first note of the composition. This is a bass album so the bass is dominant; but I didn’t want to give the bass every single partition. Those who listen to the album will see that there isn’t a solo in every single track. The second album has already been recorded, I wrote the compositions with the same approach. Of course, there are some different things in the second album, there is another ballad and I let myself go in the flow of the music and played the root sounds in that arrangement. There is another arrangement which has bass in 8-9 channels, accompanied by percussion and the drums. Different approaches.

You recorded the album with many prominent musicians. How did they contribute to your music?

Yes, I am very lucky in that sense because I recorded the album with musicians I admire and am happy to play with. They helped me record the exact music I had in my mind due to being musicians involved with this genre. They contributed greatly with their important suggestions and performances. I completed Dududa’s arrangement with my dear friend Berkan Kaya, for example.

There are two up tempo pieces and two ballads in the album. How did you achieve the dynamic balance of these pieces?

As I said before, we completed the recording of the second album during this process and even though I had a hard time choosing the pieces, I wanted emotional transitions to balance each other in these four pieces. The most important dynamic here was the emotional intensity and what I wanted to convey while writing these compositions. This is why I think this album embodies different stories and emotions.

The album consists of 4 pieces. Is this the A-side of a cassette of the old times? If so, when will we get to listen to the B-side?

Exactly. This is why it is great to give an interview to an amazing musician! It looks like the B-side will be a bit delayed but my first plan is to make a great launch. I am planning a launch where great musicians will accompany me in playing the works of important bass virtuosi. I think this will happen in January.

Can you tell us about the vocals in the titular Dududa? Are the vocals you used in this piece an effect or an instrument for you?

I wrote Dududa in Bodrum. First I wrote the bass line and then the melody. Berkan wanted this melody to be sung in unison and it ended up great. I think human sound is the most impressive thing in the world, the closest thing would be fretless instruments. So the answer definitely is an instrument. You can see that I vocalize some melodies in unison on some of my YouTube videos as well, I believe this is more effective for me and the listeners. Berkay Kaya and Duru And contributed to this album with their great vocals. I could surprise you in the second album if I can get over my shyness!

How did you feel about achieving your first solo project and presenting the listeners with your compositions as a musician who has been performing for a long time?

I have been on the stage for a long time as you said. I played to big crowds and continue to do so. Each of these performances are exciting on their own but being a part of a project or playing your project is indescribable. The responsibilities of being a sideman and being a frontman are different so the feelings, psychological processes and dynamics are entirely different. I feel the same as playing to ten thousand people as a sideman when I play to ten as a front man. Being the soloist of a project is incredibly exciting for me. I started experiencing this with Cazzip Project, it was an incredible band with the beautiful stages we put together and shared, the compositions we have written. I continue feeling these great feelings through my own album.

The recording process is one of my favorites. Do you have any memorable moments from Dududa’s recording session?

We had great fun during the recording session. Berkan and Cengiz are really funny, they made us laugh often. We naturally had some disagreements as musicians but Cengiz has been especially funny during the process and in the interviews we gave after the album.

Will there be an album launch in the upcoming days? We are excitedly waiting.

Yes, we want to give a great launch concert which features many musicians and we are currently preparing for this. We will play pieces by famous bass virtuosos in addition to the album in this concert. See you in mid-January if all goes well!