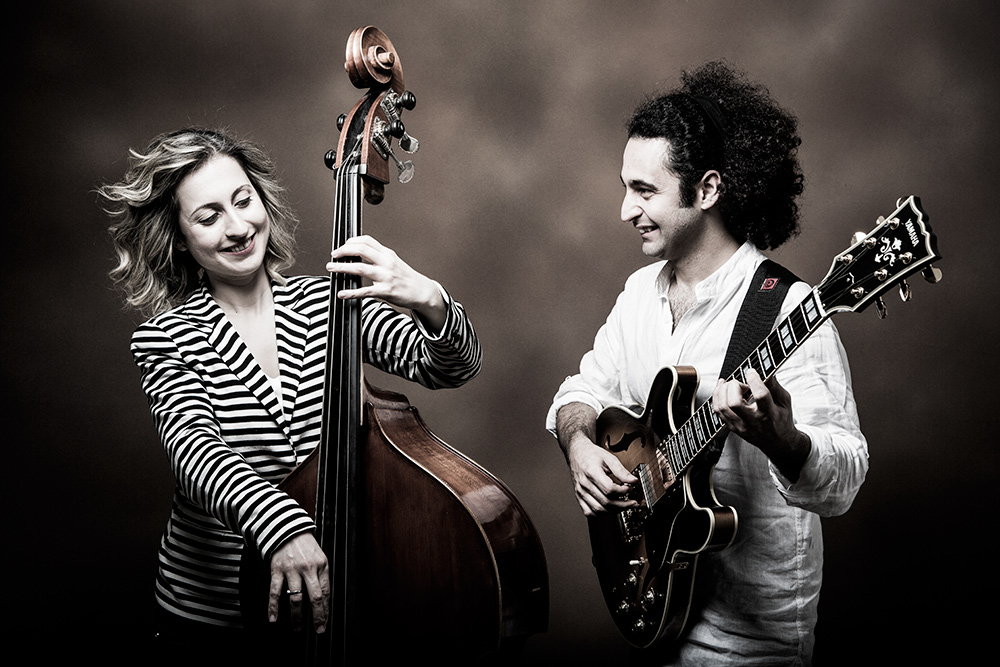 The first Blindfold of 2021 features double bass player and vocalist Esra Kayıkçı and her husband; guitarist Hakan Kamalı. Esra Kayıkçı’s interest in music started in 1999 when she decided to learn the guitar and music theory, later on becoming a semi-finalist at the 50th Montreux Jazz Vocal competition and placed first at Made in New York Jazz Vocal competition. The musician, who is also an archeologist, wrote the music for Su Perisi Song while Nilay Yılmaz wrote the lyrics for this piece composed for Allianoi Antic City. This piece was published in the accompanying CD to the book called Allianoi’ye Mektuplar (Letters to Allianoi). Esra Kayıkçı also released an album consisting of her own compositions called Bozgun Hatıra. Hakan Kamalı’s first instrument was the classical guitar and graduated from Kocaeli University’s Music Department. He completed his graduate degree on Jazz at Bahçeşehir University’s Music Technologies department. Kamalı is also the producer of Bozgun Hatıra. The couple like to make music as a duo as well as working with prominent jazz musicians in Turkey. The musician couple welcomed us at their home and we presented our selection of four pieces as accompanied by hot tea. 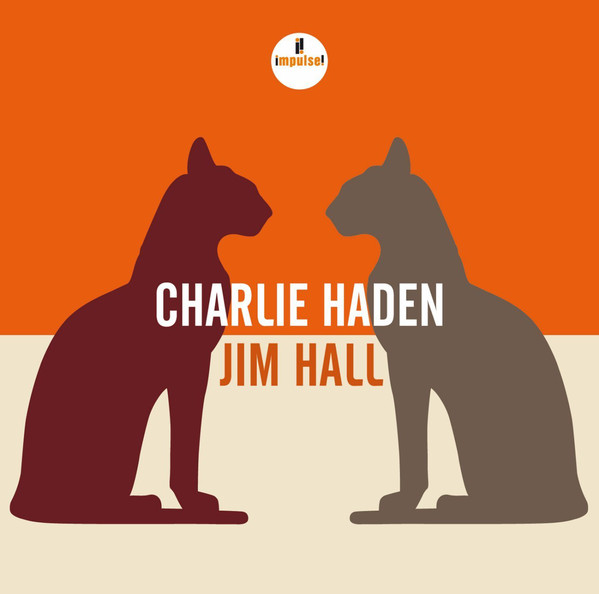 E.K. : This piece sounds familiar. I know the changes… Body and Soul. An old recording… Could the guitarist be Joe Pass?
H.K. : The guitarist is very secretive, he plays without showing off his character.
E.K. : The double bass player sounds like Ray Brown but this is a richer sound.
H.K. : Could be Ron Carter as well but he plays with more character, his touch is different.
H.K. : This is Jim Hall…
E.K. : Yes, it is definitely Jim Hall…
H.K : I have a final guess for the bassist and that is Charlie Haden.

E.K. : Yes, he plays so plainly…
H.K : It was hard to recognize him due to that…
E.K. : The intonation is great. (Charlie Haden)
H.K. : Joe Pass and Jim Hall have such different styles. The sounds they make with their instruments are as different as human vocals. I could say it is Jim Hall when he started to play his solo! Guitarists have a different touch when they play as accompanying musicians with a pick and when they play a solo, as different as black and white. Jim Hall’s naive and soft touch is telling there. His sound while playing the solo is very characteristic. How heavy the touch is, the thickness of his pick, its round or pointed shape; these are all very important…
E.K. : Jim Hall’s touch is balanced, very austere… Joe Pass’s swing feel is different as well. So is Charlie Haden’s… He uses timing perfectly, the beats are exactly where they should be as if he is following a metronome… I think Jim Hall plays similarly here as well. Haden’s solo is plain as well, he uses small motifs. 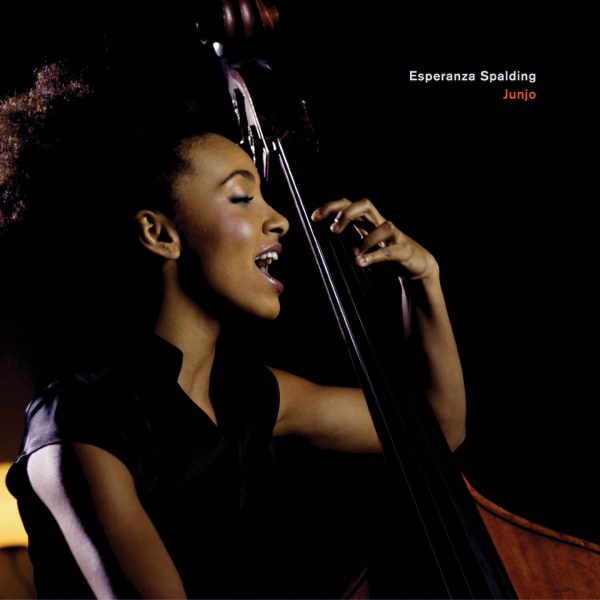 E.K. : Could it be Esperanza? It is clear from her sound and the bass lines she creates (meaning the long-winded motives in the intro). Esperanza writes both compositions and songs.

H.K. : The pianist sounds like the one she has been working with recently. It is a black pianist around our age. I don’t remember his name.
E.K. : I think the pianist is a Berklee graduate.
H.K. : We know everything about him other than his name!
E.K. : I know this piece.
H.K. : Could the pianist be Robert Glasper?
E.K. : No, it is not Glasper… This piece could be a jazz standard. Could be Esperanza’s first album.

The album is titled Junjo. The pianist is Aruán Ortiz.

H.K. : Esperanza’s music is neither arrangement music nor compositions. It is really eclectic. We can hear her intro material mid-piece or the material she worked with in the middle at the end, but they aren’t identical which shows the musician can develop the material at hand and uses it throughout the composition. Let’s assume this piece lasts 7 minutes; there is a written form that needs to be followed even though it might not be too detailed. For example, the drummer knows which scale or what to do when. So the goal here is not the solo but the entirety of the music… Solos have been the focus of jazz music for a long time. Best thing about Esperanza is her search for tunes. All the jists she did with her vocals allowed her tunes to improve to find her own sound. That is why she has such a signature sound. 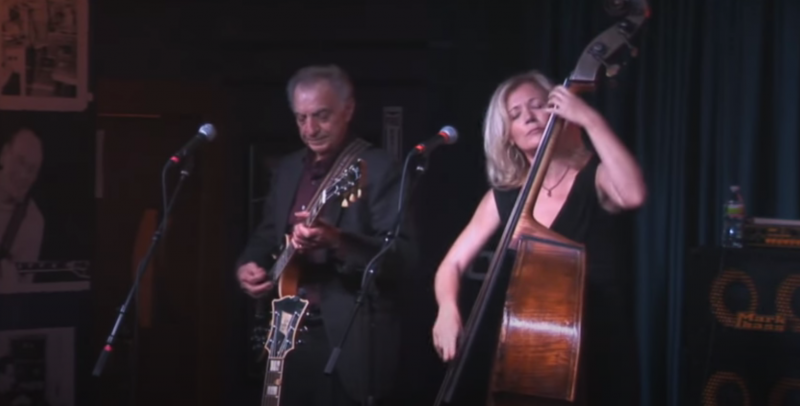 E.K. : It sounds like Stacy Kent but it is not her. It sounds like a new recording. .
H.K. : It is clear that this is recorded at a club from the sound of the applause, it isn’t a concert hall. This isn’t exactly an arrangement, it sounds as if it was winged. This is an interpretation that wasn’t planned ahead. The guitarist has a high-pitched tone. I don’t listen to such guitarists since I don’t prefer high-pitched tones. So much reverb and delay time aren’t usually preferred in solos.
E.K. : I don’t remember her name but there is a blonde female double bass player, could it be her? Could have played at Nardis…

Nicki Parrott and Les Paul’s Trio. This is the video recording of a performance at Iridium Jazz Club in 2012.

E.K. : Yes, I know Nicki Parrott. She is a good double bass player, has a great feel.

By the way, the guitarist here is the very Les Paul who invented the namesake guitars.

H.K. : This musician doesn’t sound like him though? (It isn’t Les Paul, the late inventor of Gibson Les Paul guitars who passed away in 2009, in this recording. It is Lou Pallo who is somewhat reminiscent of his style as he played in his band for many years… Nicki Parrott performed often with Les Paul at Iridium Jazz Club but started to perform with the commemorative band Les Paul’s Trio after his passing. Lou Pallo was also a member of the Jersey Guitar Mafia which was very famous in the 50s and 60s.

E.K. : I noticed while watching the video; I do similar things when I play and sing something with a Latin feeling. For example, you sing more flat in parts as you play the double bass. Listening to this made me realize I do that very same thing! One feels more rhythmic as the other seems to follow a flatter path. 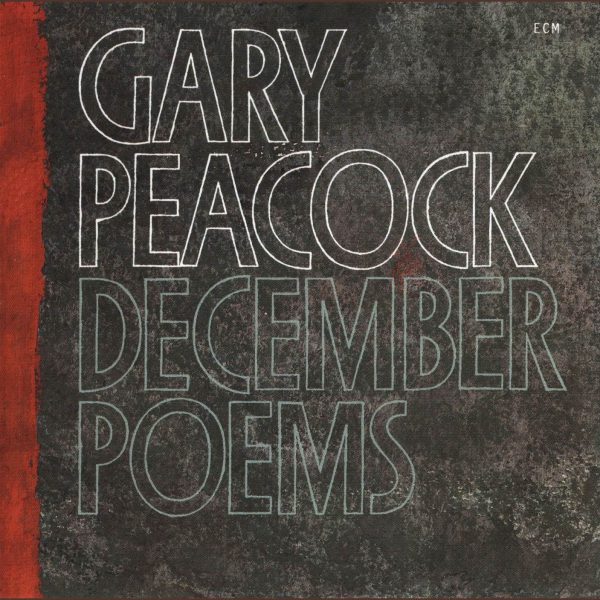 E.K. : A very beautiful tone. I think it was recorded with a loop. The tone is similar to Larry Grenadier but I don’t remember such a recording. It doesn’t sound like his music. It sounds like a new recording. I don’t know this piece.
H.K. : Avishai Cohen comes to mind with such a style and the loops used but it isn’t him either.
E.K. : There is a musician called Adam Ben Ezra who could play like this.
H.K. : Could it be Renaud Garcia Fons? I cannot understand whether it is a European musician or an American one.

H.K. : I wouldn’t think of Gary Peacock because I knew him more as a musician who embraces the future. The performance here is Gary Peacock-adjacent to me, doesn’t sound exactly like him! But he is such an important musician who is capable of many things.

It is interesting that this is a 1979 album. Thank you both for such a great Blindfold.