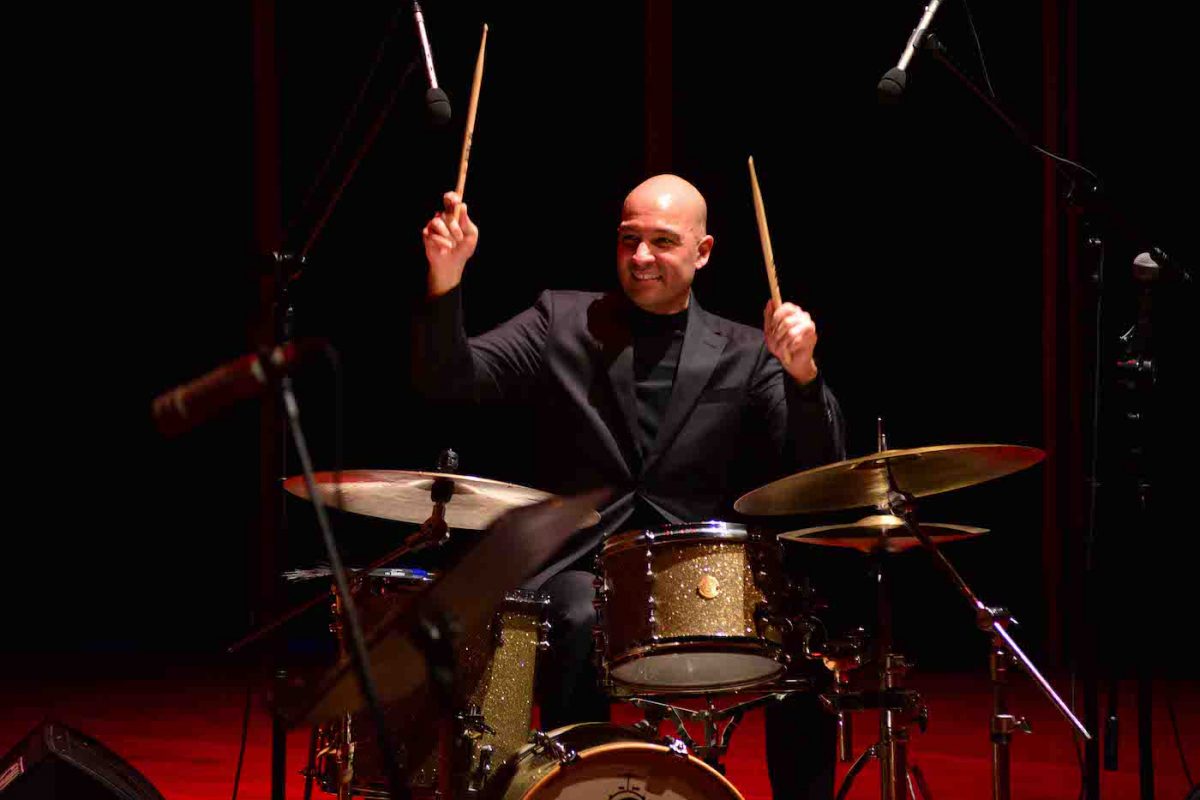 The 26th European Jazz Festival, organized by Izmir Culture Arts and Education Foundation (IKSEV) at Ahmet Adnan Saygun Center for Arts, started with the concert of Ferit Odman Quartet. Ferit Odman is one of the most successful jazz drummers in Turkey and he recently became a father. He says “I work with all my might so my daughter can do what she wants to in the future”. we have a pleasant conversation with Odman, who has a sincere smile and an honest attitude, in the backstage area before the concert.

What kind of a person would jazz be if it was of flesh and bone?

If jazz were to become flesh and bone, I think it would be like me because jazz is the same thing as breathing for me. I feel it to my bones and I live through it. I am glad it exists so that I can, too.

What are you influenced by in your music?

I am of course influenced by the masters who created this. I am really influenced by the music of people like Charlie Parker, Miles Davis, Bill Evans and John Coltrane. You first have to analyze the best in your field and know them well. Speaking about drummers in particular, Art Blakey, Philly Jo Jones and Max Roach are very influential drummers for me, they are my idols. Their every movement and everything they do inspire me. For example, we will play Look, Stop & Listen during the concert today, it is a piece also played by Philly Jo Jones. Everything in your daily life affects you really. You can play bad if you are having a bad day, or play amazingly during a good one.

Could we say that Turkey’s situation affects your music?

Of course. Living in this geography has both good and bad effects on the musicians. This applies to every geography. For example, there are good and bad things happening to jazz musicians in the States ever since Trump became the president. Musicians live their emotions intensely, unpleasant things and pleasant things can affect us deeply.

Were there moments when you thought “I am definitely succeeding in this” or “I cannot do it, I will stop making music” ever since you decided to become a musician at 13?

The most important thing about becoming a professional musician is to never stop playing. You can only became a professional that way. Therefore, I naturally had moments like “How will I do this, I cannot succeed”. You have to work even harder, focus on the issue and get back on your feet in moments like these. Other than that, if there is a musician who claims “I have succeeded”, I wish they would stay away from me. I don’t have that in my life. There are so many talented musicians, how great if I am somewhat of a drummer, but I am on a journey that will last as long as I am alive, I hope I keep going towards being better. 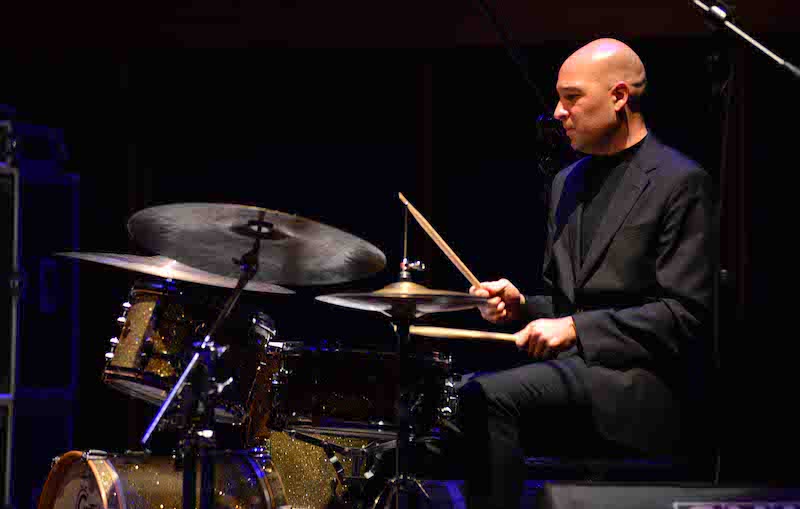 What is your opinion on the jazz audiences in Turkey?

Compared to Europe, Turkish jazz audience is much younger. I see a great interest in the younger generations. The audience profile is usually 50 and higher in European jazz clubs, but in Turkey I see people in their 20s being interested in jazz concerts. This is actually a rather good thing for the future of jazz because these people will raise their children with jazz just like the opportunity that my father gave me.

There are those who listen to it to achieve a social status.

Yes, I don’t think there is much awareness on the audiences’ side in Turkey. But I see a young audience that is trying to learn and to internalize this music. This is a good thing but if you ask me about knowledgable audiences, my answer would there aren’t.

What are the pros and cons of being a musician?

Being a musician is an amazing thing, you do what you love and not call it a job. If you work with people you love at the same time, if you can make the music you like; I don’t know anything that can top that. I feel really lucky. This is a gift and I am thankful for having it. Talking about its advantages, I am peaceful, there isn’t a war waging on inside me. I make a living doing a job (I can’t actually call it a job) I love.

What would you be if you weren’t a drummer?

I cannot imagine myself doing anything else other than being behind the drums.

You have been working with Kerem Görsev for more than 10 years. He says “Only those who don’t like glamour can make jazz.” in an interview. Do you agree with this?

I don’t agree. Kerem Görsev likes glamour (laughing). So do I of course.

I actually wish to ask, how did this music whose roots lie in Africa, became a man who wears a tuxedo as they smoke cigars and drink whiskey?

Yes this is a bad view, it needs to be demolished. Jazz is a genre that emerged from Africa and became global and I don’t like associating things with genres. Therefore someone who likes glamour can be a jazz musician, or someone who leads a bohemian life can give their heart to jazz and become very successful. That is why it is important to share the beauty of the music instead of associating it with personalities. The younger generations should go to more concerts and see that music isn’t something to fear for this view to be demolished. I hope this perception will soften in the future.

How does it feel to meet the audiences at Ahmet Adnan Saygun during the 26th European Jazz Festival?

Izmir is very lucky to have this concert hall, it is one of my favorites. There is always great attendance every time we come. I really like the Izmir audience as well.

Do you have any future projects? Is there a new album on the way?

Not at the moment. The baby was the biggest production (laughs). My daughter was born one and a half months ago and having a baby is really a big production and occupies a lot of time. I am attending to her right now so there is no upcoming album project. Who knows though, I am writing some music and I could shape it into an album in the future. I just don’t know when. 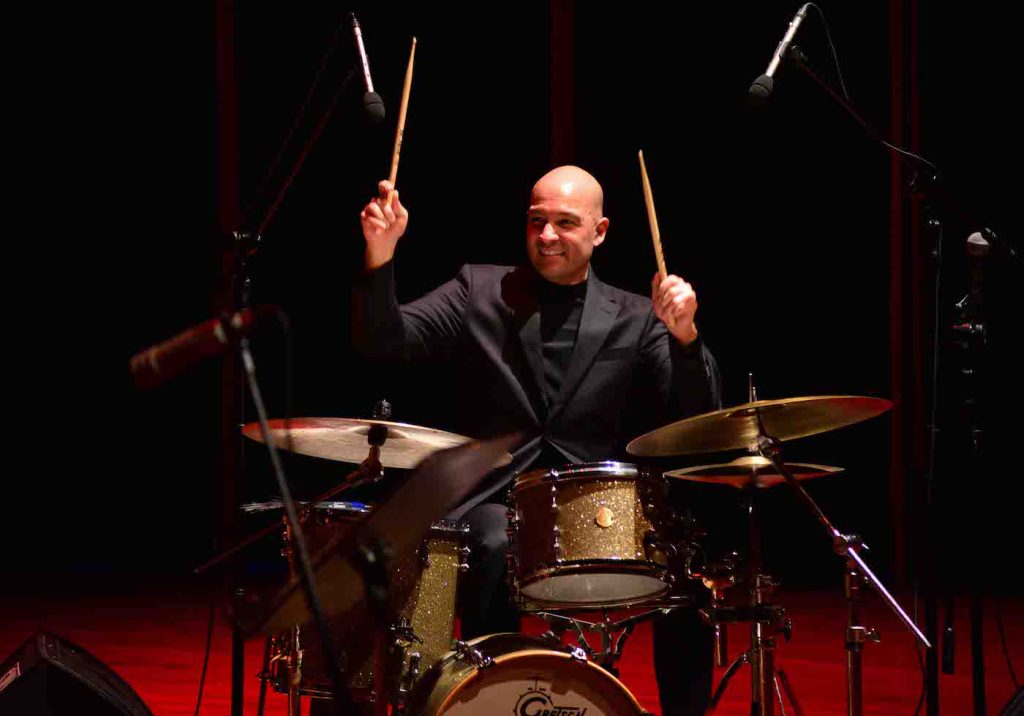 Do you have recommendations for those who are looking into playing jazz and take you as their idol?

They need to listen to this music a lot and know the right address for it. As I mentioned in the beginning, they need to listen to musicians who inspire them and internalize. It is important to know the old material and those who created this music instead of the new trends. It takes effort to get used to jazz. It isn’t a genre that one can love and understand without effort. One needs to listen to it a lot and analayze it. Then you have to receive an education on it, there are no jazz musicians without that.

How is jazz education in Turkey?

There are such a small number of schools. Our Bilgi University was on the rise at one point. Istanbul University State Conservatoire’s Jazz Department was opened last year. This is really great. Other than that, there is a jazz certificate program at Bahçeşehir University. This is all I know about Istanbul. But Istanbul is really inadequate.

I never got used to that. Yes, YouTube is the popular place to be right now but there is so much information, so many drummer channels that thinking about what I can offer there requires much effort and time. I don’t want to spend that effort at the moment. I put the album recording videos there and the albums so that the listeners can have access. But I still think I use the social media well. I am active in Twitter, Instagram and Facebook and try to share as much as I can there. People don’t get the news otherwise, social media is powerful in letting people know.

And finally, what would you like to tell your daughter Mavi for when she grows up and reads these lines? Would you want her to follow in your footsteps?

I really love her. She should do whatever she wishes for in her life. I can say “I hope I was able to open every door for her to succeed in achieving her dreams”. I will try that with all my might.

This interview is conducted by Gizem Mercan for the “Write Stuff” workshop aimed at journalism students during the 26th Izmir European Jazz Festival organized by Izmir Culture Arts and Education Foundation (IKSEV). The workshop was giving by Ümit Tuncağ and journalist Sirel Ekşi, two of the bests in this business.