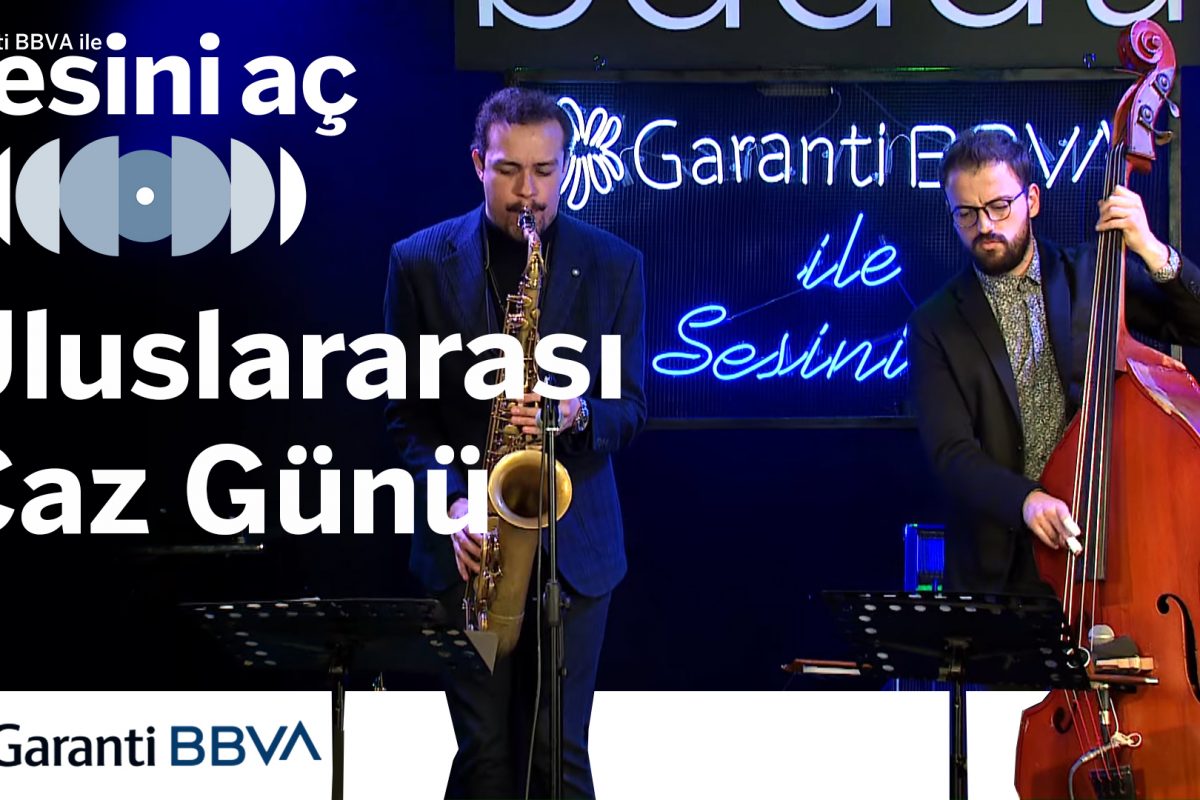 Garanti BBVA developed ‘Turn On the Volume with Garanti BBVA’ series in order to support the music sector during the pandemic days. The series will celebrate the International Jazz Day on the 30th of April with jazz musicians. 30th of April has been celebrated as the International Jazz Day since 2011, facilitated by the legendary jazz pianist Herbie Hancock. The program will be published on YouTube on the 30th of April, featuring Çağrı Sertel, Selen Gülün Trio, Batu Şallıel-The Way and Cenk Erdoğan Trio.

İpek Atcan will present the program and will host arrangement writer, composer, producer and pianist Çağrı Sertel as the first guest. The artist invites his listeners to a moment of calm through his pieces “Nefes”, “Kış Güneşi” and “Sisli Puslu” from his recently released album “Kuytu”.

Composer, pianist, vocalist and academician Selen Gülün will take over the microphone after Sertel. Gülün and her trio will perform “Başka”, “Kapı” and “Bırak Gitsin”. The musician will be accompanied by Apostolos Sideris on the double bass and Berke Özgümüş on the drums.

Batu Şallıel is one of the most beloved young generation saxophone players in Turkey. His quartet will perform “Ordinary Day”, “Sleepless Night”, “My Guilty Pleasure” from the musician’s first solo album “The Way”. Şallıel will be accompanied by Kaan Bıyıkoğlu on the piano, Enver Muhamedi on the double bass and davulda Ekin Cengizkan on the drums.

The final guest of ‘Turn On the Volume with Garanti BBVA’ will be composer and guitarist Cenk Erdoğan. His trio will play “Kabuk” and “Kara Gider” from his beloved album Fermata as well as “Büyük Ada” from “Kavis” album. Erdoğan, who is one of the most prominent players of the fretless guitar, will be accompanied by Baran Say on double bass and Ekin Cengizkan on the drums.

‘Turn On the Volume with Garanti BBVA’ invites you to invigorate your ears with its exclusive jazz content celebrating the 10th anniversary of 30th of April International Jazz Day.

Çağrı Sertel worked with Aydın Esen, Ricky Ford, Donovan Mixon and Can Kozlu during his years studying at Istanbul Bilgi University. He released his first album “Newborn” in 2010, which was followed by “Instant”. Famous pianist has signed his name under many projects with his identities as an arranger, composer and producer. He continues to perform both in Turkey and abroad as he makes electronic, jazz and rock music. Sertel has been performing on the stage with Sonic Boom, Elif Çağlar Quartet, Alp Ersönmez “Cereyanlı” and Derya Türkan in addition his solo projects. He continues to release singles from his “Multiverse” project. His 2021 album “Kuytu” has been featured in many global playlists including Peaceful Piano.

Composer, pianist, vocalist and academician Selen Gülün’s career as a musician started at the age of seven when she started attending the Istanbul State Conservatoire as a half-time student. She graduated from Istanbul University in 1992 with a degree in Business Management and enrolled in Mimar Sinan University State Conservatoire in order to study piano and composition. She moved to Boston, USA, in order to study at Berklee College of Music’s Jazz Composition department upon receiving a scholarship in 1996. She graduated in 1998 with an honors degree and award. She returned to Istanbul upon her graduation and completed her graduate degree on contemporary music composition at ITU MIAM. She worked as a member of the faculty at Istanbul Bilgi University’s Music School between 1998-2016 and taught Piano Performance, Music Theory and Composition classes. She taught new music and contemporary music, as well as giving presentations, at Berklee College of Music, The New School, The Malmö Academy of Music, The Utrecht School of the Arts, TEDx Boğaziçi University. Her performances and compositions were given the prestigious Charles Mingus Composition Award in 1998, as well as awards by British Council Visiting Arts and Creative Collaboration in Music 2003. She is currently active as a composer and stage performer with various jazz and modern music bands internationally. Her works were performed in Austria, Australia, Germany, Holland, England, Sweden, Denmark, Italy, France, USA, Brazil, Japan, Cambodia, Pakistan, Lithuania, Russia, Mozambique and Turkey.

Batu Şallıel is one of the most beloved young generation saxophone players in Turkey. His first solo album “The Way” speaks to an all-inclusive audience. The album, which took 6 months to come into fruition, consists of 9 compositions written by Şallıel. It features Kaan Bıyıkoğlu on piano and arrangements, Enver Muhamedi on the double and electric bass and Ekin Cengizkan on the drums. All of Şallıel’s pieces in the album have their own stories. For example, the musician explains that “The Way” is about how every one of us make our own paths, finding our own truths and happiness through our own ways. Şallıel says “This album and its title represent my truth”.

Guitarist and composer Cenk Erdoğan released his 5th album “Fermata” in 2018. Fermata is a music term and means taking a pause, a breath. The musician aims to provide an enjoyable pause for his listeners during his own musical journey in “Fermata” and to allow them to take a breath amidst the chaos, using the fermata symbol as a unifying roof. The artist is one of the most prominent players of the fretless guitar in the world and continues to push the boundaries of this instrument with his compositions. He has also worked as a producer and arragement writer for many projects in addition to his guitar-playing, and has featured many esteemed musicians in his album like İsmail Tunçbilek, Golnar Shahyar, Sibel Gürsoy, Tuba Önal and Dünya Kızılçay. The album’s skeleton crew features Mehmet İkiz (drums), Baran Say (double bass) and Velican Sağun (percussion). The album was released through Kabak & Lin and recorded at Hayyam Studios live. Mixing was done by Berk Kula and mastering was done by Thomas Erberger. Anıl Sam’s artwork is featured as the cover design.