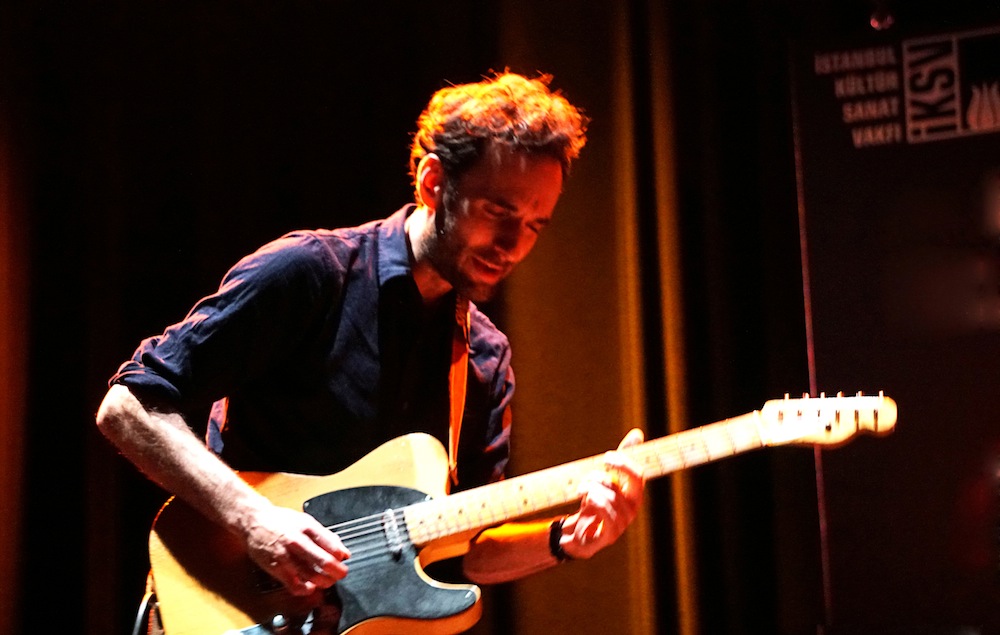 I am not an instrumentalist but I think my ears are calibrated because I spent my life among them. My ears perk up like rabbits’ especially when I hear someone playing incredibly. Julian Lage is one of those men who make rabbit ears out of mine.

The first time I have heard of Lage was in a news except in Jazz Times. I researched about this man right away with my “radio programmer who looks for new music weekly” instincts and I was smitten as soon as I listened to his first performance recording. I will never forget. 2016 Arclight album “Nocturne” got my ears perked up. It was country music, a genre that I don’t feel particularly close to myself, but his guitar had a unique, dark, soft and conversationalist tone for some reason. It was sincere. It wasn’t one of those cats who adored its own tail, as an author friend once put it.

Later on I learnt that Lage used a 1954 single cutaway Blackguard Fender Telecaster in that album. He bought this Telecaster for cheap from a luthier living in Berkeley, California, called Paul McKenzie. The reason for this was the fact that this guitar was first modified at the factory in 1957 and then by this luthier in Berkeley.

Furthermore, this solid body Telecaster was the one that got my attention during his Istanbul Jazz Festival concert as I will explain later. As a side note; Telecaster is a solid body guitar with special pickups and bridge design produced by Fender in the 1950s. It was its unique tone which became a classic. I had listened to Bora Çeliker and Eylül Biçer talking about these Telecasters in dept some time ago. That is why I read Lage’s 2016 interview with  Fretboard Journal and other things written about Telecasters before writing this article.

Lage talks about how this guitar’s sound is darker than the most but that it doesn’t get muddy unless the sound level isn’t too high. He also mentions that this guitar is very honest1 to its owner and that’s why it is possible to play all kinds of jazz with it. Julian Lage is a young talent who has mastered many different genres from bluegrass to modern jazz. He also talks about his 1960 Fender Champ amplifier and the dark harmony between this amp and the guitar. I remember seeing a bigger and newer amp during his performance at Zorlu Drama Stage. That probably is a Fender amp, too.

I read in another interview that Lage used a 1939 acoustic Martin 000-18 before Blackguard. It is another favorite of his. If you’d like to hear its sound, I suggest you pay attention to Lage’s 2015 album World’s Fair. The tone he achieved with this guitar attracted so much attention that Collings produced a model called “Julian Lage Signature OM1” using Julian’s guitar as a basis. Lage also has a Linda Manzer jazz box and a Gibson L-5 in his childhood collection.

This should be enough for the aficionados. Now I will continue onto where this lesson stemmed from; the evening of the concert.

Everything about their newly recorded Modern Lore album was memorized in the musicians’ heads as Julian Lage, his Peruvian bassist Jorge Roeder and drummer Eric Doob stepped onto Zorlu PSM’s drama stage at 19:00 on the 11th of July. Not a music stand not a sheet of music in sight… Oh la la! Julian didn’t even have a pedal at his feet. He didn’t need one. He is like an effect generator all by himself. But if you were to ask him, he already spoke very humbly about the subject:

I have a funny relationship with those things. I love them and I find them really inspiring, but I always feel a little bit awkward, and I always witness masters who do it, like Bill or Nels [Cline], and it’s almost pushed me in the other direction, where I just say, “God, those guys are so good at it, such magicians, I’m just gonna keep plucking away with one sound as much as I can…” (Fretboard Journal: 2016)2 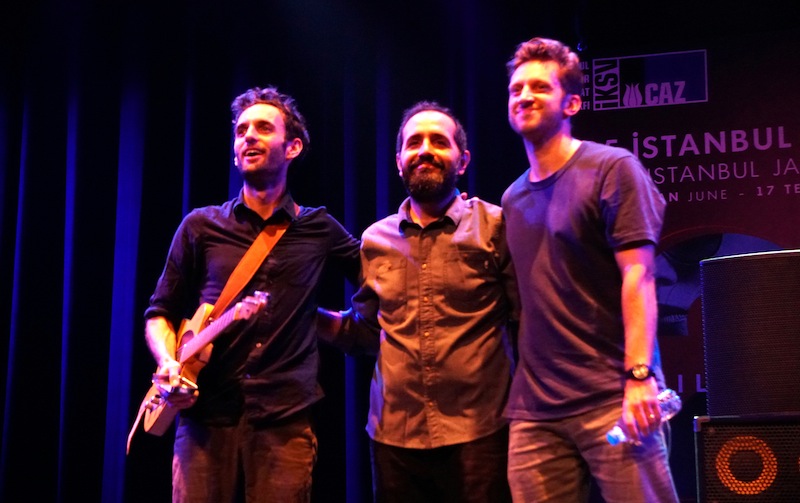 Looking back at the memorable performances of the evening of 11 July, “Ramble” from Modern Lore first comes to mind. Kenny Wollesen played the drums in a much more sterile and spacey Latin feel in the album. Eric Doob’s drum sticks were fiery like the wings of a firefly in the concert in contrast.

We listened to “Fortune Teller” from Arclight with its bluesy licks as the third piece of the evening. We waited for them to play “Nocturne”, we even chanted at Lage, but to no avail. You cannot write a title on a piece of paper and send it to the stage. What can you do?

“Roger the Dodger”, which is a Bluesy waltz, and “Earth Science” with its dissonant harmony in which Julian seemed to fire directly at Doob with his Tele at every melodic turn were the other striking pieces of the evening.

Jimmy Van Heusen’s “Darn That Dream” and Sammy Fain’s “I’ll Be Seeing You” were the slower pieces of the concert.

It is a tradition for me to catch a piece for myself and put it in a pocket during every concert. In order to write on it or to enjoy its different versions at home… This hunt is rather fun. This time I hunted a piece Lage wrote for his musical comrade, singer and guitarist Chris Eldridge, aka Clitter. He announced the piece as “For Clitter”. But to avoid any misunderstanding; this isn’t the same piece as “Butter and Eggs” which he also wrote for Clitter. I am sharing the piece, whose actual title I recently learnt about, below for you to enjoy.

The repeating motif in the main theme reminded me of Johnny Mendel’s composition “Emily”. My mind even went a step further. I imagined myself in the midst of a country musical. The main actor seemed to call out for the woman he loved over and over.

It is necessary to write a bit about Julian Lage Trio. Eric Doob was a more rocker sort of drummer. His elastic dynamics and solos were really striking but they were occasionally too harsh for this particular music. Especially in the atmospheric intro of the concert.

I was very excited to meet Peruvian bassist Jorge Roeder and listen to him live for the first time that evening. He collaborates with Lage and Gary Burton’s new quartet. He was invited to Rimski Korsakov Conservatoire in St. Petersburg with his cello that he has been playing for two years when he was 16 years old. He played the first double bass in Lima Philharmonic and Opera Orchestra. He dabbled in jazz in the meanwhile; he worked with Danilo Perez at New England Conservatoire in 2002. He was in the semi-finals in the competition Thelonious Monk Institution organized in 2007.

Jorge Roeder had a solid touch and intonation that evening. He worked like a bee and kept the energy high throughout and balanced Julian’s velvety guitar and Doob’s metal fan-like drum sticks. If his dialogues with Julian were filmed, they would be an exemplary lesson for ensemble classes in music schools.

Jorge Roeder’s duo with Sofia Rei. I recommend checking his recordings with pianist Shai Maestro out.

Finally, I would like to express my own opinion about a topic in discussion. Some people see Julian Lage as a showman. Is that because he spontaneously pulls back his right hand as if it is cramping and then hits the strings? I don’t know. This repeating action seemed like a playing technique to me. Just like the way he shakes his guitar to create a different feeling of vibrato, he even mentions in a video interview that he prefers lighter guitars solely for this reason.

My personal opinion is this: Julian Lage has a very special touch. This is the special touch of a 30 years old man who shone on Santana’s stage when he was only 8, played at the Grammy Awards ceremony at 13, started playing with Gary Burton at 17 and has learnt everything to learn about guitar techniques. There is an incredibly rich range of dynamics in that delicate ba;ance between his finger and the pick. This isn’t a hysterical dynamism that lists extreme contrasts one after the other, annoying the listener. It is like the voice of a master storyteller that fluctuates softly between high and lows. It is a style that camouflages the montage effects masterfully and convinces you that what you are listening to are true…

Yes, storytellers put on a show, that much is true. And maybe they don’t make efficient group leaders. They aren’t actually concerned with that. But what they tell does not empty your head like a soapy showman; they engage you on the contrary. Therefore, I think if Julian Lage is putting on a show, that can only be the show of a master storyteller.