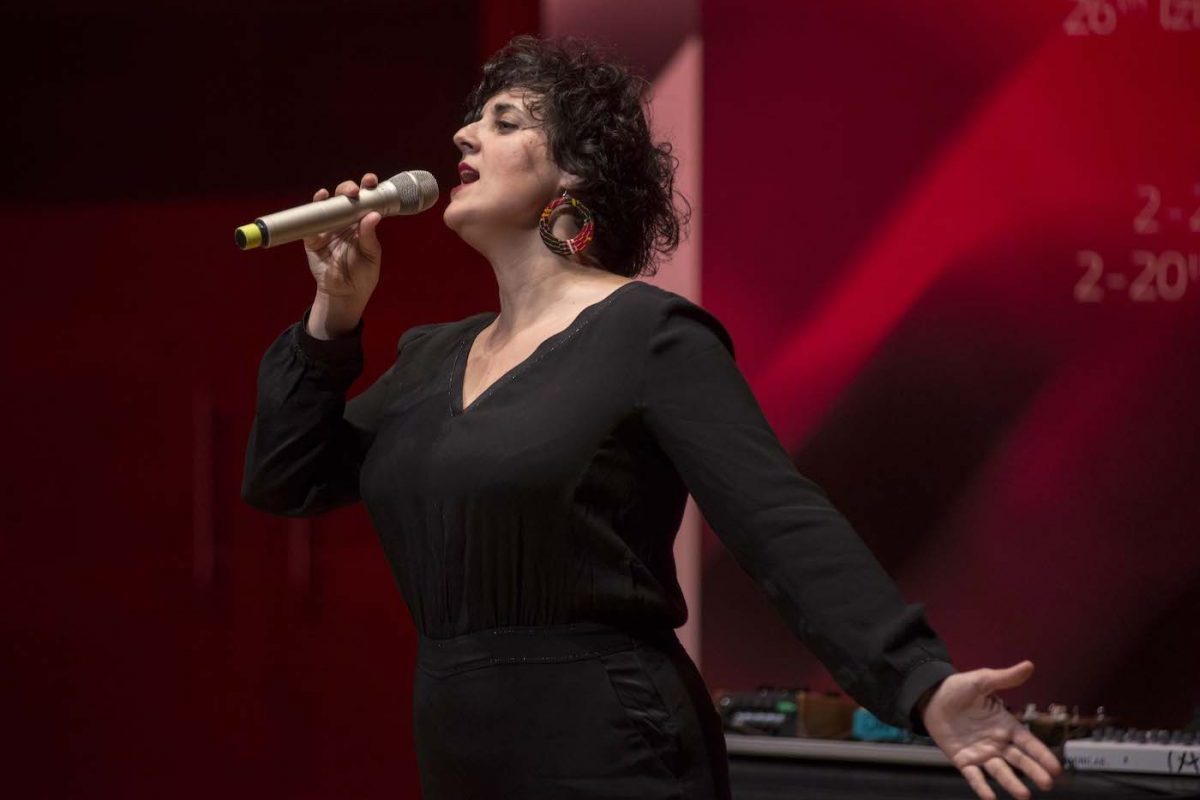 We had a short conversation with Marion Rampal about her music after her Marion Rampal Trio concert during the 26th Izmir Europe Jazz Festival;

You combine and interpret folk music and jazz in a very natural way. How did this come about, could you tell us a bit about it starting with your childhood?

I was always surrounded by jazz. My grandfather played jazz piano, a little double bass and the clarinet. He wasn’t a great jazz musician but he was a part of a small jazz scene in the south of France during and following the war. He played with many esteemed musicians like Lionel Hampton and Louis Armstrong during his tours. I cannot say he played what he did completely right but he had his own romantic style. For example, he would listen to and play Nat King Cole a lot.

Could the melancholy we feel in your music be related to the time you spent with your grandfather?

My music always went hand in hand with nostalgia. This also stems from my research into Blues. I have strong intuitions towards Blues. This music is a black American genre and belong entirely to these people. However, you can come across traces of Blues in many different folk and traditions musics in the world. We can see these traces in the way these cultures express themselves and their socio-political situations. What they live through affect the way they sing and this causes them to express their souls through an global truth. Therefore I am interested in all of these old stories and with Mediterranean women since I am from Marseilles myself. Because I was always surrounded by different folkloric music that isn’t French or even European. I would hear music that belonged to the people in the north like Corsicans, Italians or Occitanians.

Then could we call your music multicultural?

Yes, definitely. We could call it a mixture. This is exactly what I am after. I oppose purity in music full heartedly.

Rafael has a really important place in my life. We still play together. He is really differet; he is like my daughter, grandfather, brother. He also is very interested in the spiritual side of jazz and jazz musicians. For example, he researches into the transcendental elements in Coltrane or Albert Ayler’s music. He also is interested in combining local and traditional musics with jazz. Including classical and jazz! He has a deep relationship with Bach. He combines the music of musicians like Bach and Mozart with jazz.

We were together for my latest project as well, we recorded Bye Bye Berlin with a strings quartet.

What could you tell us about Bye Bye Berlin project?

The compositions in Bye Bye Berlin mainly belong to the people who had to flee Germany during the rise of the Nazi regime. They are contemporary compositions written by composers with classical backgrounds, such as Hanns Eisler and Kurt Weill during 1920-1950s with the influence of Brecht. These people created the music we call American music by going to Broadway and even Hollywood. They listen to jazz music brought by the American soldiers during WWI and combine European music with black music. Most pieces in the album were prohibited in Germany during that period.

How did the Marion Rampal Trio we saw during the 26th Izmir Europe Jazz Festival form? How did you come together? You occasionally give your pieces to musicians for their albums. You have your band mate Anne Paceo a piece before?

I have written lyrics for Anne’s projects, yes. The lyrics of the songs in her latest album belong to me. What is interesting is that Anne and I met at a jazz festival and she was interested in my music. My works as a lyrics writer wasn’t well known back then. We shared a common taste in music and wanted to start a project together for the longest time. We came together with Pierre-François Blanchard in rather interesting circumstances. We met at an improvizatory vocal workshop. François was the pianist there. There were dancers, vocal performers and actors at this workshop. All these participants were trying to raise their voices and to strengthen their expression. We discovered after this meeting that we share a common musical background caused by our families and our work in music.

We have a duet album with him in which we discover French poetry and French tunes. We interpreted classical music from the beginning of the 19th and 20th century (something we definitely didn’t belong to) with jazz melodies and forms.

As an artist who combine many different musical genres together, how do you evaluate the changes and improvements in your vocal tecnique after all these years and work?

To go back to the beginning, I wanted to be a Rock’n Roll singer. I actually wanted to be a male Rock’n Roll singer! I know this sounds weird but this has nothing to do with my sexual identity. It took me a long while to start to listen to female singers. I rather listened to male singers like Jim Morrison and Jeff Buckley. Jeff Buckley can sing his pieces rather feminine actually, just like how the opposite can apply to a female vocalist. These are all parts of the vocal world…

I returned to the world of jazz music after this period and I realized how easy it was for me to use my voice to sing the jazz standards I have been hearing for years. I felt like I was floating in the music on the stage and this gave me such peace. I went back to writing lyrics afterwards; the way I chose to express myself. There was a war waging on between the standards and the novelty during this period as you can understand.

Now I know that we don’t only discover ourselves but are made up of things that we carry from our past or things that were told to us. 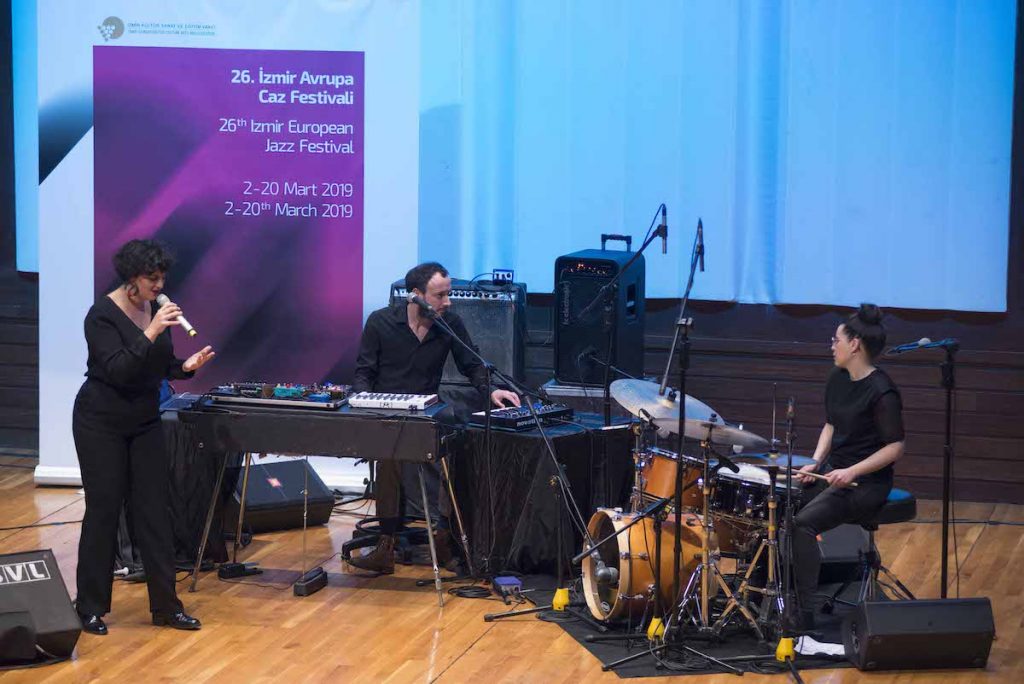 Other than these, I could list the experiences that contributed to my vocals during vocal performance meetings. I started my research in this field in order to find all the colors and possibilities of human voice after being told “You are a woman and you should sing like this”.

Interacting with Black American music, my musical relationship with Archie Shepp, artists like Amina Claudine Myers, Gospel singers, these all influenced me. Listening to these people created an almost physical effect on me, because I changed. These things cannot be learnt through listening to their CDs or by practicing, you have to put yourself on that path. I felt really close to them and the feelings I got when they sang Blues or Soul were really powerful. I could not be the same person after listening to these. And this was something I felt deep, deep inside.

Ultimately, you have to decide what you want to do in your own music with these influence and experiences. This will always be a valid question for me!