Guitarist, composer, arranger, producer and improvization doyen Şevket Akıncı’s album “Escher Chronicles-Escher Günlükleri” that he has recorded with his own band and contemporary music collective Hezarfen Ensemble has been released by A.K. Müzik. Dutch painter and graphic designer Maurits Cornelis Escher is one of the most fascinating artists in the world and is known for his architecture and perspective work on seemingly impossible spaces.

We wanted to share the unabridged version of the interview we have done with Şevket Akıncı on the 16th of June 2017 for Hürriyet’s Kitap Sanat supplement with you our esteemed readers. 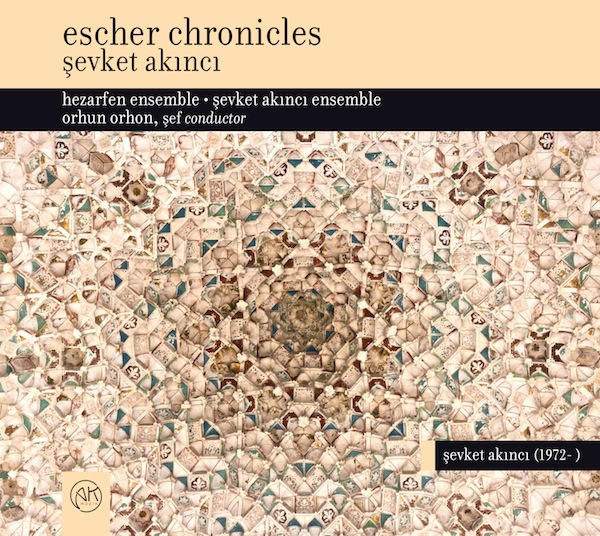 It is inevitable for Escher’s works to influence you with their constant change and development. When and how did you decide to go ahead with this project?

I started working on this album about five years ago with the encouragement of my pianist-composer friend Elif Bleda. There was no talk about Escher at that point; I wanted to make ensemble music in a period when I used to listen to composers such as Gavin Bryars, Steve Reich, Heiner Goebbels, Fred Frith and heavily to Berio. And I was bored of the “boundaries” of free improvization. I think I wanted to listen to a different kind of music in which I could inject the particular sound of free improvization to other forms as well. I was trying out stuff with the keyboard in my room, but I wasn’t really satisfied with the results because there was no main force to gather all the ideas underneath. Then one day I was looking at Escher’s painting with my poet friend Şevket Kağan Şimşekalp, he said “Look, some of the things Escher has done are similar to your own ideas.” and I started to study Escher’s works. The motifs in my compositions were really the prep for the other motifs to come, and the latter one carried traces of the former. Rhythm and counterpoints are present in most of Escher’s works. I started to work on this, instead of transcribing Escher’s works entirely in notes, I investigated the projection of the impressions his ideas left on me through music. We started to record the demos at Elif’s house. I am really thankful to her because she spared me so much time. I am not a great piano player and she played all those partitions with piano without complaint. I would compose at home, and go knock on her door when I was done. 4-5 months went by like this. My family, especially my wife, provided much support to me during that period. They were incredibly patient because people get egotistical during the creation process. I am thankful to Amy Salsgiver as well, she came to my help after the demos were done and introduced me to Hezarfen. If it wasn’t for these three people, my wife, Elif and Amy, this project would never be realized… The reasons for my wish to write Escher Chronicles, I really don’t know. I think the choice comes before the reason, just as in most of my musical decisions. The product came about in a period when I was questioning the concept of culture. Because I haven’t looked farther ahead than the West to define culture. In some African languages, the word for art is replaced by game. And I felt as if I was trying to crack the code of a game while confronted with the concepts of duality, paradox, metamorphosis, oxymorons etc. in Escher’s work. Another culture that nourished me was the Hindu culture, especially their perception of time. Time is a linear progression for the Westerners with a start and an end, Hindus see it as a circle. I think Escher is one of the rare artists who could portray time. And the time he portrays is circular. I think I was most allured by this aspect.

Three Turkish musicians are accompanied by three musicians from Holland in Istanpool project. Did playing playing and giving concerts with them in cities of Holland have any role in your interest in Escher?

There is no miraculous state borders like Holland. And the prince is like a puppet after the Spanish people had left. So all cities have their own power and all decisions are made democratically. It is a nation that make both democracy and the concept of an overseas empire work hand-in-hand. In that aspect, it is interesting that they got ahold of Indian trade before the British and that they invaded the major spice exporter, Indonesia and its surroundings. So there aren’t many other nations comparable to Holland in the world. How did they do it? It is all about the free-will and industriousness of its people, because they have nothing to back them up, no powers behind them but only their own intellect, power and talents. While the other nations waged wars, Dutch people invested in trade. Even today they are ranked the first in agriculture. It is interesting that someone like Escher comes from this country. Of course, it isn’t the state that makes the artist. In most countries, artists exist despite the state. But the tradition of democracy, their industriousness and their rich history of painting culture would put Escher in an advantageous position.

Escher’s relatively famous works have found their corresponding musical pieces in Escher Chronicles album. Like “Metamorphose”, “Cycle”, “Horsemen”, “Flatworms”, “Encounter”. You express that listeners can create their own modality and metric partitions in these pieces. Could you explain in simpler terms the rhythmic and metric uncertainties that make this possible?

It is easy to express Escher’s paintings with music. He has told numerous times that he hears music in his work during interviews and conferences. For example, we see a certain pulse when we view “Metamrphosis” horizontally. We can get rid of the bar lines because there are interlocking figures. For example a 4/4 time signature can be followed by 5/4. I used a basic technique called metric modulation, so they continuously change. This causes the first ‘1’ in the time signature to disappear. We call this polymetric structure. The writer can put his ‘1’ anywhere he likes. It is open to relativity. It isn’t something new. It is a popular composition technique ever since Stravinsky’s use. But when you view “Metamorphosis” vertically, things get more interesting then. Not only the “1” disappears through the simultaneous playing of the melodic lines from different signatures, but also the harmony created by the melodic motifs simultaneously played together is freed from the tuning pitch. Therefore the chords in the resulting coincidental harmony aren’t the precursors of those that follow. Escher was a landscape artist before he created those works we call “Escherian”. I wanted to address some of those paintings as well since I was chronicling all Escher’s work. There are some bizarre elements in those paintings as well because he places his point of view in impossible angles. 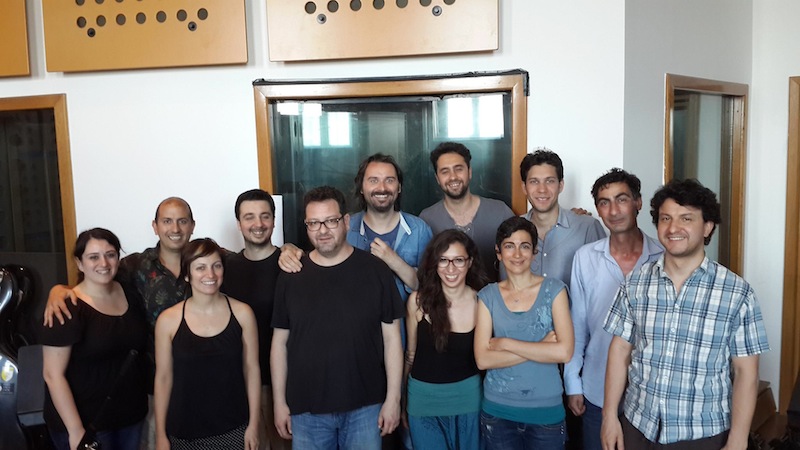 There is “Eight Heads” on one side; mezosoprano Berna Anıl sings it, it is a minimalistic piece with rock and jazz elements. Then there are impressionist pieces performed by Hezarfen. How did you differentiate between Escher’s pieces in your head and connected them with their corresponding music?

It is hard to categorize Escher because he created a movement all by himself; he isn’t an expressionist, cubist or surrealist. Out of my respect for this “uncategorized” artist, I tried not to be bound by categories myself. I am not sure how much I was able to achieve this…

Let’s mention Escher’s most famous work “Tower of Babel”. “According to the story, the united mankind which speaks one common language decides to build a tower that would reach the heavens. God sees this as insolence, and creates multiple languages so that people wouldn’t understand each other.” And Şevket transforms this into music with sampling and sound engineering in this album. How would you summarize this piece structurally?

How fortunate that God got angry at mankind and made them multilingual! This way everyone has their own reflection on feelings and thoughts and harmony was born as a result. If we had only one language our lives would be so monotonous. Another detail that inspires awe in me is the fact that it is drawn from god’s perspective—since no human would be able to draw from that high up—so the god is making fun of humans, and by putting himself in god’s position, Escher makes fun as well.

Douglas Hofstadter’s book “Godel Escher Bach” isn’t easy to read but it also has an interesting and positive acknowledgement. You must have read it; did it influence or guide you while designing the pieces?

I think my math could be a little weak, I had trouble understanding Gödel. Interestingly math wasn’t Escher’s strongest suit either. It is hard to believe. Bach’s involvement is very clear to me. Bach has been a guiding force while making this album. I believe the art of fugue is as relevant as ever today. Just as the meaning of older works of art can change under the light of the newer ones, Steve Reich made it contemporary, for example. We can hear the art of fugue which emphasizes counterpoints and rhythms in Ligeti’s piano etudes. Also in the works of Duke Ellington, Fred Frith’s guitar quartet, King Crimson or Meshuggah. I don’t want to delve too deep in the theoretical aspect but it is hard to write such compositions without utiziling mathematics.

Who do you think will or should listen to this album other than listeners of minimalist music and free improvization, those who already follow your work?

This album hasn’t been mentioned in a classical music magazine so far, so this means it isn’t entirely classical; it also wasn’t mentioned in a jazz magazine so it’s not jazz either. Rock magazines didn’t show much interest, so it’s not rock. Even I am having trouble trying to describe it. But there’s this: My father is conservative when music is concerned. He did not like anything I have done so far, expect for this album. He isn’t one to walk around on eggshells and he is a harsh critic. That is why I believe he lived it. I hope if I can win my father over, I can win over many new listeners as well. I have received positive feedback from my musician friends. Of course, there are things to criticize about it, but I am at the beginning of my path.

Who do you dedicate this album to?

The album praises polyphony, therefore it also indirectly praises democracy. Multi-vocality versus monophony. I dedicate this album to the soul of the Gezi events which battled to uphold a more anarchist understanding of ethics.