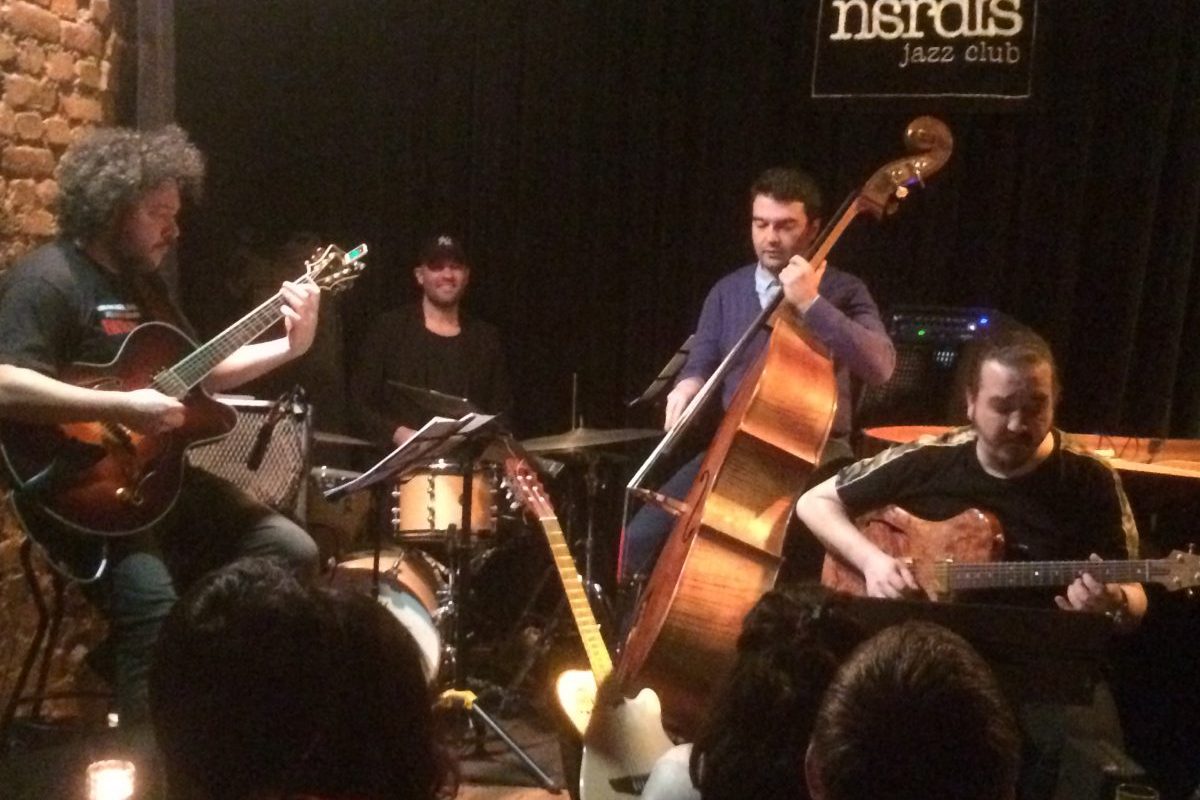 We will publish student essays for the Concert Evaluation class in this sergement. The second example is Kerem Türkaydın & Cem Tuncer concert which took place at Nardis Jazz Club on the 6th of March 2018.

On 6th of March, Kerem Türkaydın & Cem Tuncer Quartet concert took place in Nardis Jazz Club, where the most exclusive jazz events in Istanbul since 2002 happens. This quartet contains some of the best Turkish jazz players, which are consecutively, on one guitar, Kerem Türkaydın, who we know from his commercial music projects and jazz theory books; on the other guitar, Cem Tuncer, who plays in TRT Jazz Orchestra and composes songs for TV series, drummer Ferit Odman and double bass player Kağan Yıldız. Apparently, with this stellar rhythm section, any concert would have been a feast of music.

Located in the district of Galata, where different cultures all around the world gather around, the audience had their share of multiculturalism; and they have liberated themselves on the common quest for jazz. Furthermore, during the concert, the audience were always informed about the songs both in English and Turkish. Even the jokes were multilingual, this happened to be a good interaction between the players and the listeners.

The sound of the quartet was highly melodic and accessible, where well-known songs from Benny Golson, Dexter Gordon and Pat Metheny were played along with their compositions. The two guitarists were the compositors of the original works. Cem Tuncer, with his bluesy background and his authentic guitar sound, played very soulful and rhythmic solos and attracted the audience with his fluency on the fretboard. His blues-oriented sound was essential, especially for analyzing his originals named as “The Cat” and “Pulling the Head Along”. Diffusion of 12-bar-blues and well-placed dissonances nourished his expeditions of jazz. On the other hand, Kerem Türkaydın had more of a classical-influenced playing style, in which he created it with a well-matching electric-classic guitar. His improvisations were consisting of chromatic lines that created tensions and then gliding into eurhythmic resolutions. His original works called as “Tango in Subconscious” and “Masal” outlined his approach on guitar, where some critical elements from other genres were included, i.e. flamenco. Besides, the bass and drums were perfect complements for these genius guitarists. For each and every moment, Odman and Yıldız had played their roles on time and created the vast playground for guitarists to explore the boundaries of their music.

Ultimately, in the end of the concert, the enjoyment of having listened two virtuoso guitarists encourages the musicians among the audience; indeed, this concert exhibits two disparate techniques of advanced guitar players, which also show how varieties can build up a unique harmony. And as a whole, the concert was a remarkable one with its accomplished musicians and incomparable sound; therefore, I recommend it to all who would have the chance to see this concert again.