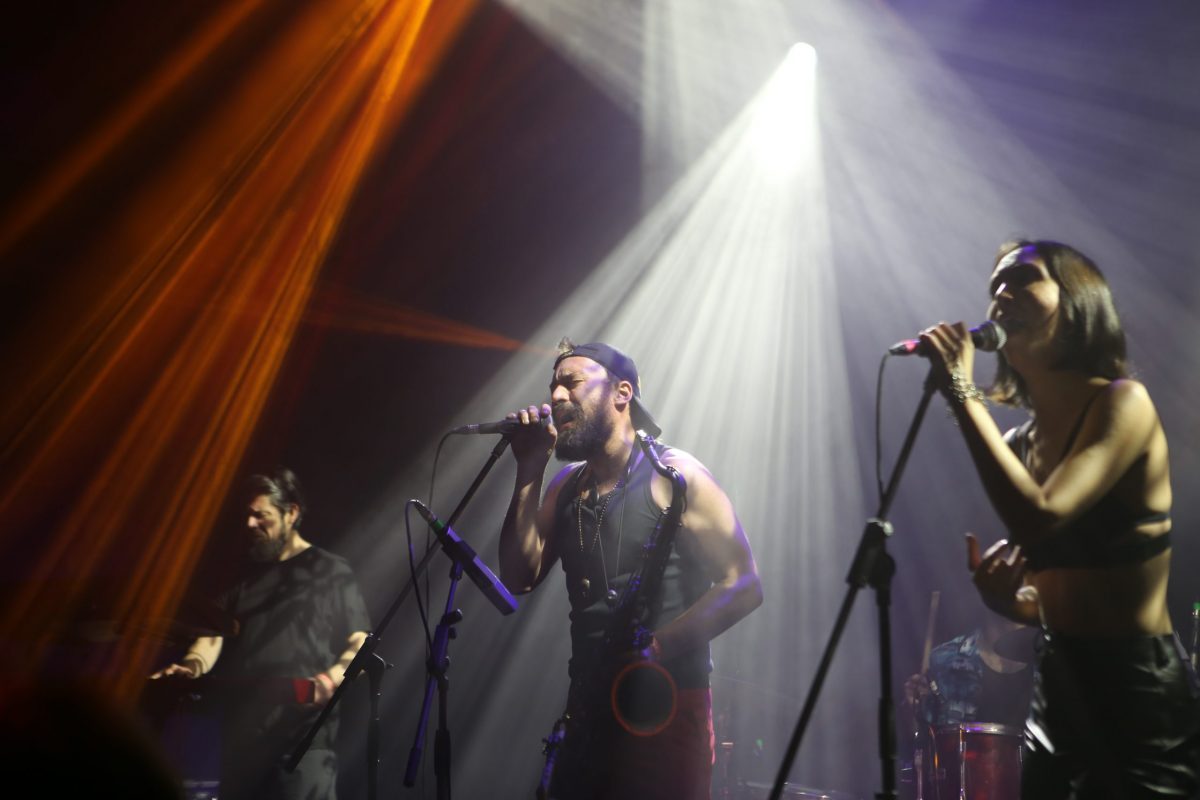 We met at Babylon Bomonti with Korhan Futacı, who made a name for himself with his works in the Turkish alternative music scene, in celebration of April 30 International Jazz Day!

Korhan Futacı describes the unique chaos of Istanbul with harsh and dark themes with his projects such as DANdadaDAN, Taburada, Konstrukt, and Black Orchestra, where he uniquely uses Psychedelic Rock, Jazz, and local tunes. He is accompanied by Burak Irmak on claviers, Eren Turgut on bass guitar and double bass, Berkan Tilavel on drums, Barış Ertürk on baritone saxophone, Barış Doğukan Yazıcı on trumpet, Bulut Gülen on trombone, Kerem Sefil on percussion instruments and Senem Demircioğlu in background vocals. You may know Burak Irmak from the electronic music band 123 and the alternative/indie rock band Adamlar; Berkan Tilavel took part in Adamlar as well. Barış Ertürk is our saxophonist who took part in Karambola, Yolda, Tahterevalli and Ricky Ford Orchestra. They take part together in the big orchestra of Barış Doğukan Yazıcı and Emin Fındıkoğlu, and in Ayhan Sicimoğlu and Latin All Stars. Barış Doğukan Yazıcı also appears in Serhan Erkol Melting Pot, TRT Jazz Orchestra and many more projects. Bulut Gülen, on the other hand, is one of the first names that come to mind as a trombone player in the Turkish Jazz scene; meanwhile, his highly anticipated second album “Bosphorus Train” has been released recently.

Korhan Futacı, whom I met quickly backstage before the April 30 concert, 3 days after the concert, answered the questions below, which will create an opportunity to see from different points for those who came to the concert and those who could not. 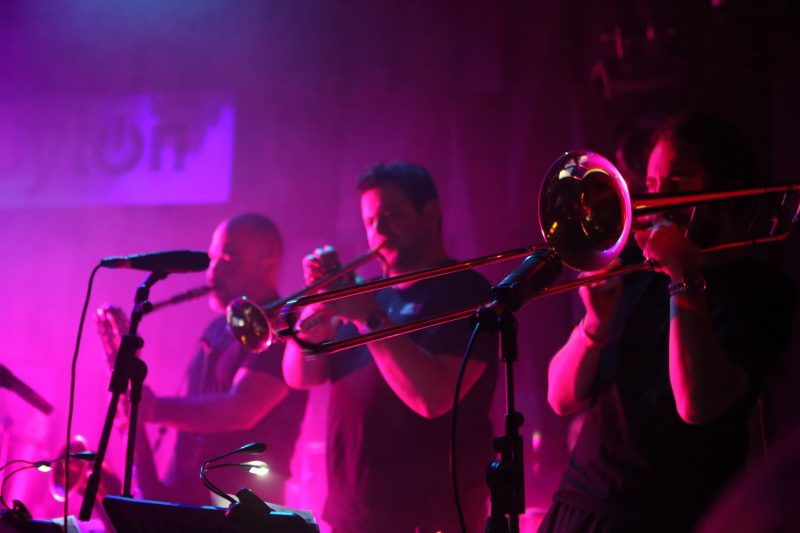 First of all, I would like to ask this. On International Jazz Day since 2012, events are taking place all around the world in order to celebrate, educate, participate and create. Every year we have the chance to experience this enthusiasm with concerts, workshops and chats in İstanbul. What does today mean to you, have you made any special preparations for the April 30 concert? (The music you play, the team you are working with, etc…)

Hello! April 30th the World Jazz Day is celebrated all over the world with great enthusiasm and colorfulness, as befits the nature of jazz. As just mentioned, performers and listeners who set their hearts on this music get the chance to experience an even more intense sense of pleasure thanks to the events that continue throughout the year, as well as many more concerts and many educational workshops on this chosen day. We took the stage with a much larger team than usual at this concert held in Babylon for this day. Frankly, my goal was to turn the whole concert into a real celebration. We wanted to create a ritual atmosphere with songs that stretched out and reshaped with improvisations. Naturally we created the repertoire from works that could serve this idea.

You were inviting the band members to an adventure at the beginning of the concert. The band members followed your hand gesture perceived as “Let’s say welcome together” and enthusiastically called out to us with saxophone, trumpet, trombone, key/percussion instruments and bass. This in particular caught my attention and I enjoyed it. Your excitement and energy was reflected on the stage from the very beginning. I guess you work out the general lines during the rehearsals and travel to the unknown during the concert, right?

Yes, that is usually the case. It is definitely hard to predict what the energy of that day will bring to the music that is being played beforehand. It may be necessary to lead especially a crowded improvisation team from time to time, but the musicians on the stage that day were such masters at their jobs that I didn’t have much work to do.

We can see that you have a rooted audience as they accompany you enthusiastically during the concert. It is utterly different listening to you live! From your red stage outfit, to the use of fog and light used in the concert, to the original performance produced by 9 musicians, they all present a riot of sounds and colors to the audience. I think it is not an easy task to design it from start to finish. In this project, have you started the creation process alone and then proceed with the layer-by-layer additions of the team members?

We are happy if the enthusiasm inside us was understood so clearly from the outside as well. Yes, I usually set a flow and an atmosphere in my head. Then I create a pool with the ideas from my other musician friends during the rehearsals and take notes of them. Those ideas are blended until the day of the concert, and it is almost at the last moment that we prepare a song list to play. Sometimes we even make adjustments according to the energy of the audience during the concert. I think it is very important to capture the spirit of the moment in jazz and its derivatives.

During the concert, you also announced the album “Karmaşaya Aşina”, which you released on digital platforms on April 29. We can get the same tastes we got in the concert throughout the album as well. Who owns the compositions and lyrics in the album? When did you recorded the album? How would you say the album release process was like?

The compositions in the album belong to me, but I’ve got some help from director Onur Ünlü in one song and my wife Seda Gazioğlu in two songs. Also on this album; one of the best rap artists in Turkey, Gazapizm, accompanied me in the song “bam bam” with his own lyrics. We recorded this album as in my previous albums, by playing it live as much as possible and to be as close to the feel of the concert. Especially the backing tracks were recorded live together. I recorded the vocals later in order to get a better sonic result. Kıvılcım Konca recorded and mixed the whole album, and even played the trumpet in one song. Feryin Kaya ,who also plays the bass, did the mastering. The drums and cymbals are played by Berkan Tilavel, and the arrangements and keys are by Burak Irmak.

What does this photo on the concert poster mean to you? Is there something you look forward to, something you hope for? 1. Like World Peace… 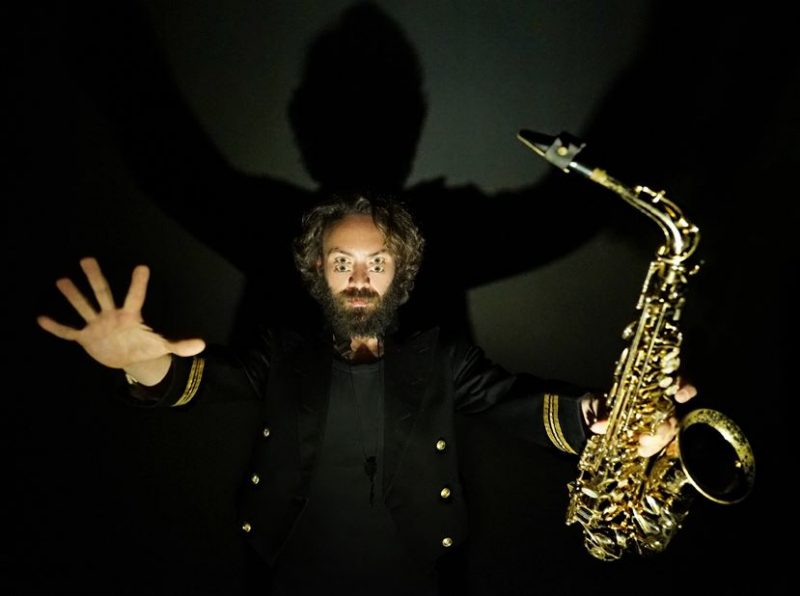 Korhan Futacı (Photo: babylon.com.tr)First of all, I look forward to the disappearance of the technical problems that prevent Turkish musicians from becoming world musicians. I wish that problems such as economical and travel restrictions disappear as soon as possible. And of course, the embodiment of ultimate world peace, which all people of the world should unquestioningly agree on.

We listen to both transitional and innovative examples of jazz and different music genres at venues such as Babylon Bomonti, İKSV Salon, Nublu İstanbul, which closed 6-7 years ago just like Kaset Mitanni, and partially Borusan Music House and Bova. Especially in these places, we experience the performances of musicians and bands such as Korhan Futacı, İlhan Erşahin, Oğuz Büyükberber, Gevende, KAM, Develer, 123, KonstruKt etc. This might be a rough one… How do you see the relationship between venues, venue owners, and musicians? Can you find enough space for yourself?

After a certain period of time in my professional life, my relationship with these has strengthened of course. Friendships are formed outside of professionalism with time. Things work out more smoothly after that point. I think my musician friends who have just entered the industry will establish these relationships and gain a good place on these stages as well. I think what’s important in this case is to try to see things from both sides. The problems experienced by a musician are also experienced by venue owners from different perspectives. That’s why it’s not helpful for anyone to look at issues only from a technical and material point of view. People in the industry need to take care of each other and respect their professionalism.

Burak Irmak was playing the claviers at the concert. When I looked at his playing, I also thought of Çağrı Sertel; whom I later realized that you were performing with as well. The contribution of these names that produce Fusion, Electronic and Alternative music cannot be denied. I guess similar minds find each other in this world somehow, right? What would you like to say about the musicians you work with and your projects?

These names are definitely the pioneers in the alternative music scene both in technical and creative sense. Musicians sharing the same period and producing with similar visions find each other in some way. This is not only within Turkey. It is the case in the international community as well. I got the chance to perform and record with musicians from all over the world. Actually, I think the beauty of jazz music is its universality. That it can become the common language of all people. I am planning to increase the number of meetings of this kind. I have high hopes, especially from musicians of this land that they will have more recognition on the world scene with the characteristics of Anatolian geography.

Thank you for your time. Good luck with your new projects!

[Korhan Futacı]: Thank you. Have a nice day.

The albums featuring Korhan Futacı on the Turkish Jazz Albums page are listed below in chronological order: