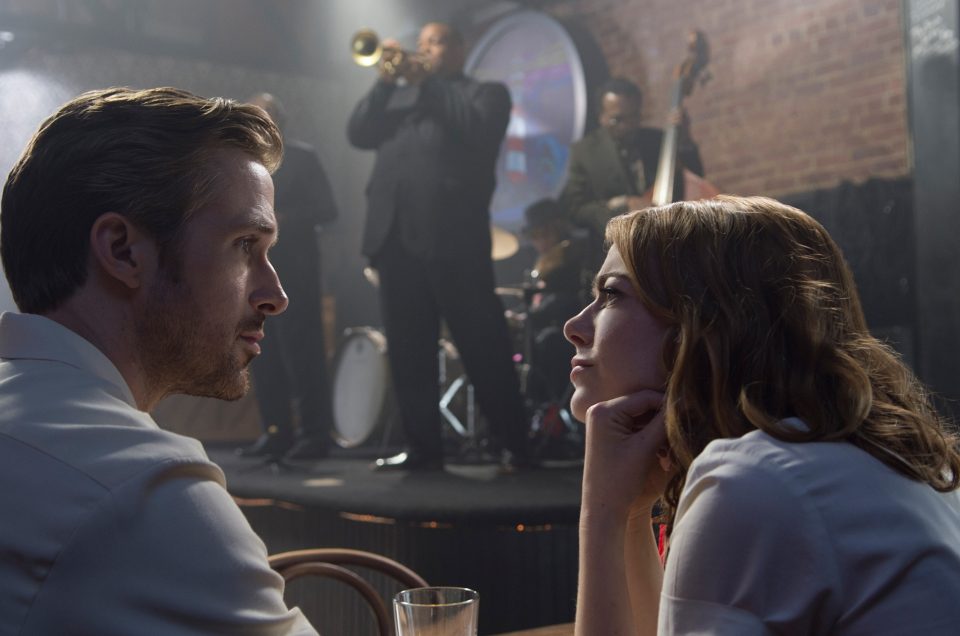 I was persuaded into watch La La Land due to peer pressure, or the fact that the movie Whiplash didn’t damage me enough.

The movie tells about the love between the handsome and young jazz pianist Sebastian (Ryan Gosling), who hasn’t had any success yet but wants to play the music of his dreams (we don’t know what kind of jazz that is in the beginning of the movie) and Mia (Emma Stone) who auditions to become an actress while working as a barista. As in all romantic musicals they will hate at first, then fall in love but end up having to stay apart due to a nonsensical reason and in the end passionately run into each others’ arms. I am not a big fan of romantic movies but I can watch it with pleasure despite the cliches if the movie in question is also a musical.

Sebastian has to play, rather unhappily, Christmas songs on the piano at the restaurant he works at, but he cannot bear it and ends up playing something different. The owner of the place (J.K. Simmons, he always plays the shouting man who decides on the rules, just like Chazelle’s alter ego) fires Sebastian, saying “Avant-garde jazz isn’t allowed here”. Let me make it clear, though, what he plays has nothing to do with avant-garde jazz. (Most jazz musicians end up playing Christmas pieces and include these in their repertoires. Marcus Roberts’s Celebrating Christmas is my favorite among these. A good jazz pianist can turn such an evening into a musical feast both for himself and his audience, if Sebastian is failing to do so, it is due to his own deficiencies.)

Mia and Sebastian get on each others’ nerves for the next couple of scenes, and one day they get closer and Mia tells him that she doesn’t like jazz. Sebastian stars mansplaining and throws aphorisms left and right about jazz. He says that real jazz has died in the 1960s after Charlie Parker!!!

(I can understand this mentality in a world in which Wynton Marsalis gets upset at his brother Branford Marsalis because he performs with Sting, only to end up playing with Eric Clapton himself. Occasionally even I get this feeling, along with man others, and I am thinking I would like to watch a story about such a traditionalist man at that stage of the movie.)

Anyways, let’s backtrack to the conversation between our couple. Sebastian finally lets all strings loose and says he will save the dying jazz, and not only through his playing but by opening a jazz club of his own. Mia is not capable of understanding how absurd and sociologically impossible what this white man is saying about saving an Afro-American genre that has been around for 100 years, because she is in love with this beautiful man and she only lovingly stares at his eyes instead of saying “Come to your senses!” Sebastian says he wants to play “pure jazz”, and we don’t understand what this means—not that Mia cares about such details.

Directors and writers convey their ideas to us through the voice of their characters. I immediately thought director Damien Chazelle was trying to get into the business of jazz after hearing Sebastian’s words, and he does so according to his own beliefs and through the most populist techniques available. Just like he did in Whiplash—the actual event that happened to Charlie Parker, when he gets the cymbal thrown at his feet—he popularizes the actual happening in a way that seems impossible at best in real life—the scene where the student gets the cymbal thrown at his head like a ninja weapon, how the young drummer learns double swing in a single night despite the fact that people study this for years in reality, the bleeding hands caused by drumming (which won’t happen unless the sticks have splinters), when he gets in an accident and gets wounded but still ends up on the stage with all the bleeding, the fact that the drummer can change the flow of the concert with a single and independent decision (If he did something like this at Carnegie Hall, his music career would be done)… He almost transforms his movie Whiplash into an instalment of the Rocky franchise (I haven’t seen his first movie, I don’t think I will), and mansplains his own vision of jazz, ignorantly and arrogantly; to women, to men, to young people who might end up liking jazz, to children, to the whole world with La La Land. 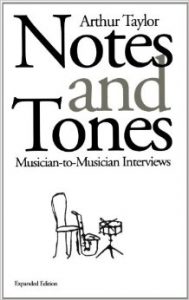 In his book Notes and Tones (the sincerest book on jazz that I have ever read) Arthur Taylor asks the jazz musicians he interviews “What does the word jazz mean to you?”, and they says that they don’t like the word jazz, that it was created by white people, that they play whatever feels right in those days and how white people want to categorize that. Now a white man who sits on the director’s chair does the same mansplaining, done by the white people to the African-Americans back then, but this time to all music and movie lovers.

Switching our focus back to the movie; one day while they were having some food Sebastian runs into Keith (John Legend), a musician he has played with but isn’t particularly fond of. Keith offers Sebastian a job that pays $1000 per week ($1000 per week is an incredible income for a jazz musician, “modern jazz” that the movie talks about, a genre we cannot even begin to understand is so popular!!!), and our pianist accepts. We immediately understand that our handsome pianist will have to play a “modern” version of jazz that doesn’t sit right with his own traditionalist music values, just for the sake of earning money. The girl will probably see this, get sad and tell him “This isn’t who you are, pursue your dreams Sebastian” etc.

Keith mansplains to Sebastian (feminists love the word ’mansplaining’ but I don’t think it only applies to situations when a man explains something to a woman; it also is appropriate to use when a dominant person explains it to someone weaker than themselves) by asking “You are still stuck on Kenny Clarke and Thelonious Monk, they were revolutionary, how can you be like them if you are such a traditionalist?” (I won’t say that this plebeian and basic concept can be acceptable within certain framework, because I don’t trust this director anymore). I am waiting for their first concert together to see what will come of it. In the first scene from the concert, aside from the presence of a trumpet and a sax, they play pop-funk, while accompanied by dancers with mini-skirts, which has nothing to do with either a musical or jazz visually. Mia of course is sad. Keith (John Legend) is over the classic jazz period (!!!) and is representing the new modern jazz. We are expected to hate the music he makes. Do we though? No!!! If it wasn’t presented as jazz, especially if you are at a disco, it could even be entertaining. We only end up hating the director.

The movie ends without a single memorable melody. Sebastian, played by the women’s heartthrob Ryan Gosling, doesn’t go to see Mia’s first show, but Mia shows up for Sebastian’s first concert. Sebastian’s tendency to mansplain knows no boundaries. He has something to say, a movie he wants to show, even though cinema is Mia’s specialty. Sebastian is expected to be a sensitive character who likes classic jazz, but he turns out to be a vulgar man who keeps honking his car to call Mia over, because the director believes in this—we encounter the same kind of harassing attitude in Whiplash—which seems to say if you shout at and harass someone enough, you can get them to do what you want. (I will give an example to demonstrate: Hank Jones was a defender of classic jazz just like Sebastian, and played the music talked about in the movie, classic jazz, until he passed away in 2010. You can see the elegance and the profile of such a man. You can decide how believable a character Sebastian is yourself.)

Let alone the discrepancies and arrogance about jazz in this movie, the fact that the director chose to cast a man and a woman with great bodies—as if this is mandatory—, despite the fact that they cannot play the piano, to sing or even to dance—I am not sure if there are any other criteria to be cast in a musical?—and the fact that Ryan Gosling studied the piano only for 3 months just to look as if he was playing, the basic and subpar music, weak choreography leave us with a rather macho and mediocre at best musical which is devoid of romanticism. The director digs himself into a hole in his concern to save jazz by making a musical that jazz musicians won’t consult—in the traditional way—while looking for pieces to interpret.

So what comes next?

In the short run, this movie with the nostalgic atmosphere will do even better at the box office, given our state of emergency. Every movie represents certain lifestyles (A friend of mine who sells hi-fi equipment and systems had told be they sold a lot of record players following the release of the Turkish movie Issız Adam). I think people will end up going to jazz clubs for a while after this movie. They will want to listen to what this classic jazz Sebastian was talking about (I watched Sibel Köse Group’s performance at Nardis Jazz Club on the 21st of Januay—a great example to classic jazz). Bands that focus on guitar, fusion or avant-garde music will lose popularity.

I did the same thing. I remember looking for a shabby jazz club after watching Round Midnight for the first time—still one of my favorite movies on jazz—somewhere that played such music as was in the movie and preferably with cigarette smoke!!! This was the beginning of the 1990s, smoking was allowed everywhere but there was no such music.

In the long run, due to the fact that young people are active on the internet, La La Land’s IMDB score will surpass that of An American in Paris or Singing in the Rain—I am noticing it already has, when I am putting these links up—but this scene will never be forgotten:

Nobody will talk about how Ryan Gosling learnt how to play the piano in 3 months, but we will always remember how Fred Astaire dances and played the drums.

George Gershwin, Irving Berlin, Stephen Sondheim, Jerome Kern, Cole Porter will continue to influence musicians with the scores they have written for musicals.

And this review will carry no importance whatsoever, because John Legend, John (far from) Legend is a musician who has performed in a jazz festival in Turkey and La La Land has been nominated for 14 Academy Awards as I am writing this critique.