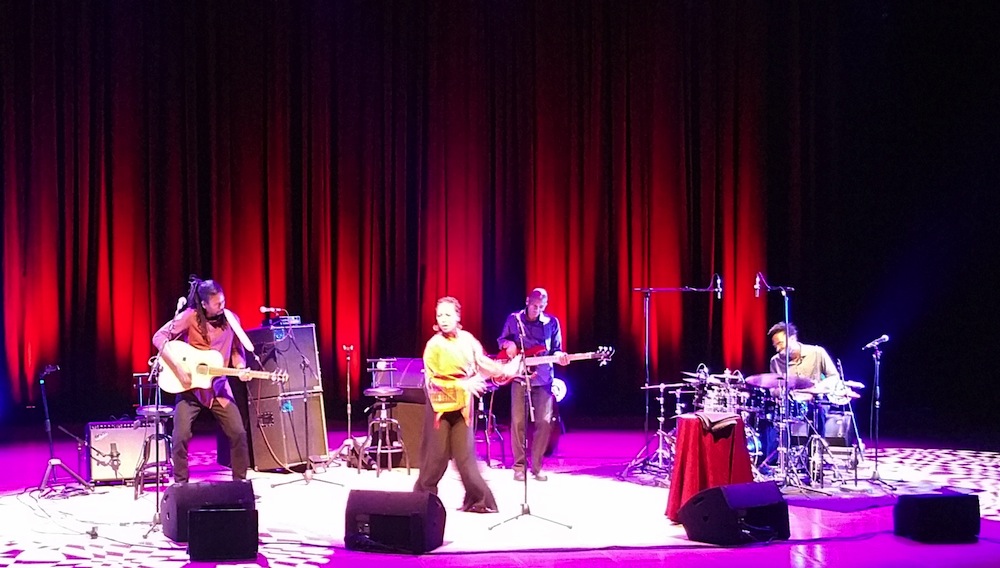 I have always enjoyed concerts in halls. People take peeks at the instruments on the stage as they look for their seats  and the excitement keeps climbing ten minutes to the concert’s start. As I said, concerts in halls are great. There are no distracting elements between the audience and the music. The phones and lights are off and the dim stage lights draw us into the performance.

The guest of CRR Concert Hall this evening was Lisa Simone (Kelly), who has proven her many talents with her Broadway shows, her candidacy for the Grammy Music awards, and her “Best Actress” award she received from the American National Broadway Theater Awards for her performance in the Aida musical.

The concert started with Hervé Samb’s acoustic guitar solo. Samb is the musical director of Lisa’s latest album as well as its guitarist. He was soon followed by Sonny Troupé on the drums and Reggie Washington on the bass and Lisa elegantly saluted the audience as she found her place on the stage.

The music started with a plain rhythmic figure and the vocals of the band members were enchanting. It seemed to remind us that vocal music doesn’t only consist of song/singer but also choir/vocals. Lisa Simone filled the music and the stage with her ability and self-esteem that her experience in Broadway has provided her with.

She gave a small break before the third piece and the lights were turned on the audience. She clearly wanted to see everyone. She called out “welcome” from the stage towards the audience and it was her turn to invite us in. Then she reminisced about her mother, she was the daughter of Dr. Nina Simone, the great vocalist, after all… 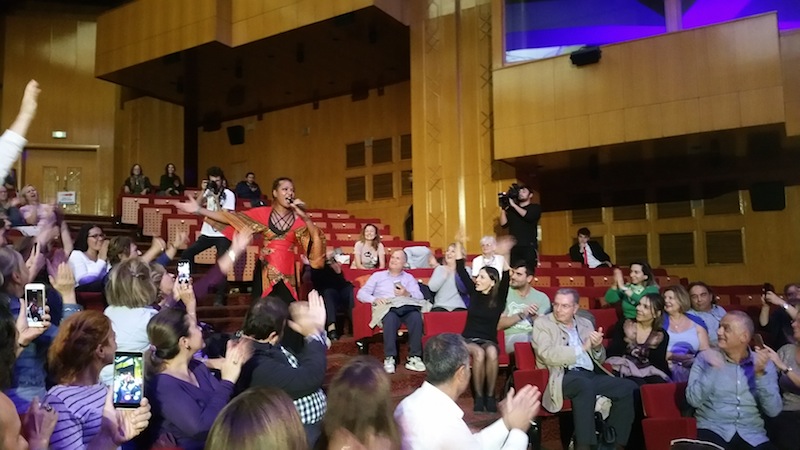 She worked hard to transform her performance into some sort of a musical game instead of merely singing one song after the other, she seemed to have a story to tell and wanted to share that with us. The dynamics constantly swelled and dropped during the concert as the music surrounded us like a misty cloud.

I started the article with praising the concert halls but the concert seemed to continue with the excitement of a club as we all wanted to get up and jump on the stage to lose ourselves in the music and dance.

Lisa’s musical director and guitarist Hervé Samb was the other star of the evening. He directed the sound with his acoustic guitar and clever use of the effects pedal and did not make the audience look for a pianist on the stage.

Evert single piece started with a unique idea or a joke and then got transformed into a small show. Lisa is a vocalist who makes eye contact during her performance and communicates with all the members of the audience while playing small games wth them. But I think we still aren’t used or prepared for this. It would be great to try to get familiar with such attitudes and to enjoy them. Let’s not forget, music isn’t a one-sided action. The excitement of the audience is more important than anything else for the musicians on the stage. I think this is the most important dynamic of the concert atmosphere.

As I said, Lisa likes communicating with her audiences and we saw exactly how much when she shook hands with almost the half of the audience members and when she dances with them. She continued her wonderful performance as she walked among the audience members. Then everyone in the concert hall got on their feet. Everyone started dancing with Lisa, forgetting their reservations about reacting. Lisa finally captured her audience and succeeded in making everyone focus on her drum solo.

Every single piece became huge pieces that filled the hall through the beautiful energy of the band as Lisa continued to show all her talents. As every good thing must come to an end, so did this performance with all its great energy.

Once you enter the hearts of Turkish audiences, you stay there. I think the call for an encore could be heard from Bostancı on the Anatolian side.

Many thanks for this incredible evening Lisa Simone…