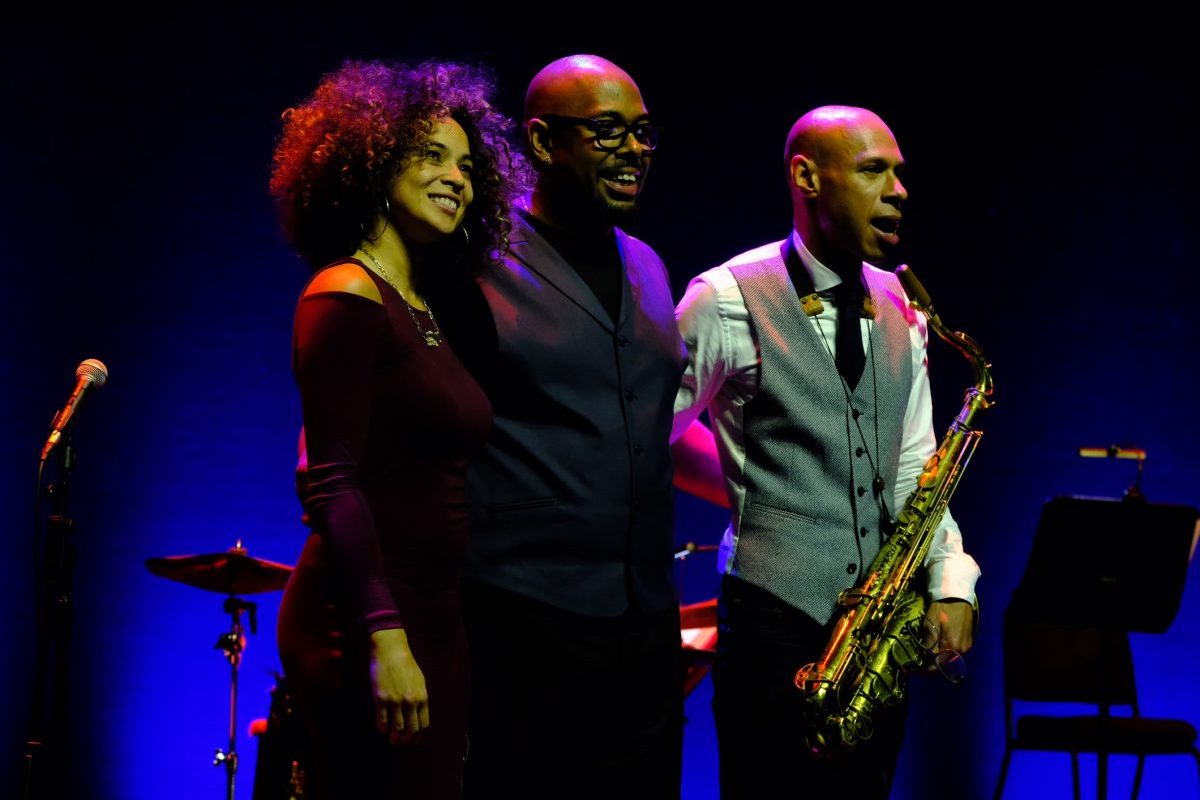 One of the highlight events of the 24th Istanbul Jazz Festival took place on July 11, on Tuesday night, at Zorlu PSM Main Stage. TRT Big Band who met with Roy Hargrove, Allan Harris and Roberta Gambarini for the closing night of the festival last year, was back on stage, again with a list of star guests. These artists were Christian McBride, the master of double bass, Joshua Redman, the dynamic breath of saxophone and Kandace Springs, one of the young queen ladies of today’s soul jazz scene. Besides, the previous week, Kamil Özler, who dedicated his 35 years –as a musician, arranger and conductor– to TRT Big Band, had received a “Lifetime Achievement Award” from Istanbul Foundation for Culture and Arts (IKSV). Therefore, we had a super-vigorous night, brimming with lessons and unforgettable moments. Now let me summarize for you what has happened that night.

First, we should mention the names of the TRT Big Band personnel. We had Engin Recepoğulları, Serdar Barçın, Meriç Demirkol, Çağdaş Oruç and Barış Özer on saxophones; Emre Kayhan, Hakan Çimenot, Kürşat Sekban and Hüseyin Çakır on trombones; Utku Akyol, Halil İbrahim Işık, Barış Doğukan Yazıcı, İmer Demirer and Sercan Kerpiççiler on trumpets; Cem Tuncer on the guitar, Serkan Özyılmaz on the piano, Ozan Musluoğlu on double bass, and Ferit Odman, who was the spokesman of the night, on drums.

The night opened with 4 compositions written and arranged by Kamil Özler, the recipient of the IKSV “Lifetime Achievement Award”. These numbers were called “They Use It”, “Esintiler”, “Samba Longa” –which featured the super-talented flutist Serdar Barçın, Ozan Musluoğlu (b) and Barış Doğukan Yazıcı (tp) on its solos– and “Chicken Changes” (A humorous song with reference to rhythm changes, featuring all instruments in the solo sections). Now the stage was flying high in the sky, which means, the big band was ready to invite Christian McBride to the stage. 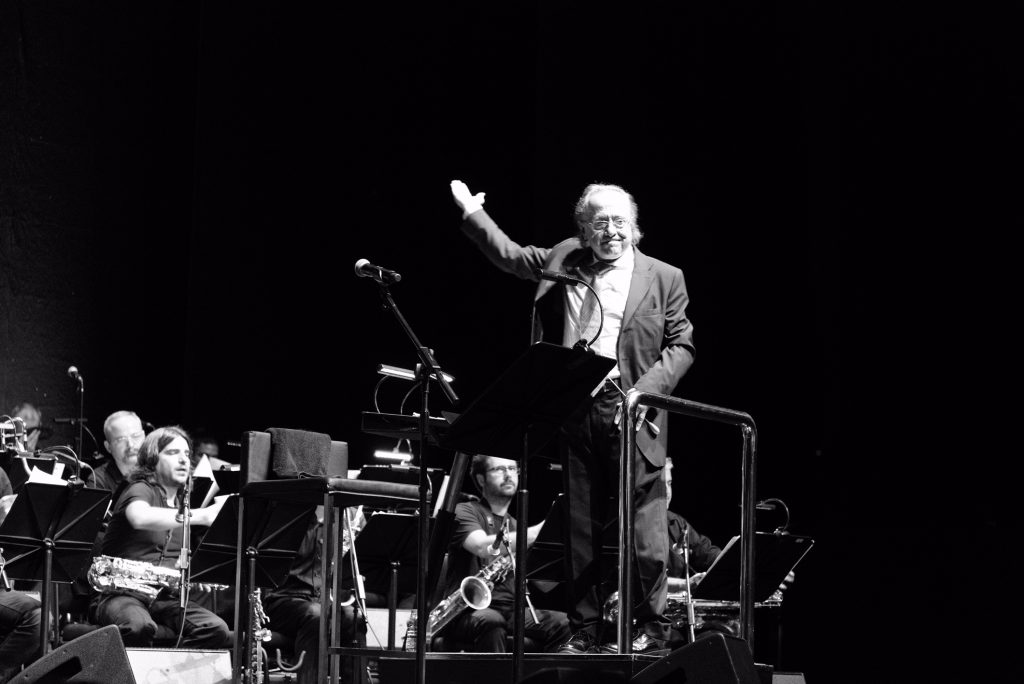 As McBride was coming on stage, we were all curious if he would play Ozan’s double bass or his own instrument. But McBride preferred his own instrument, and his first action stage was to set the bass amp EQ for his taste. And the moment his fingers touched the strings, it was the slapping McBride sound echoing in the space between the wood and the strings. Though pretty involved in jazz, I’m not an instrumentalist yet, so I had hard time searching for the correct jargon to describe this sound for you guys, but at last, the author from JazzTimes magazine, Philip Booth ran to my aid with his article published online. And I saw that neither him nor McBride himself had used any technical jargon to describe it.

In his article Booth says that he had held an interview with McBride when McBride was in the beginning of his career, and asked him what kind of double bass tone he pursues. And McBride had replied that he wanted to hear the wood-chopping sound when playing his instrument. So, as I also witnessed with my own ears that night, Christian McBride, who also learnt a great deal from Ray Brown and Ron Carter, was loyal to his very first wish.

By the way, since we are talking about the past and the passage of time, let me give you some little additional information. During the TRT Big Band concert, we learnt that Christian McBride, Ozan Musluoğlu and Ferit Odman had been friends for about 15 years, but this was the first-ever concert where these three men came together officially. 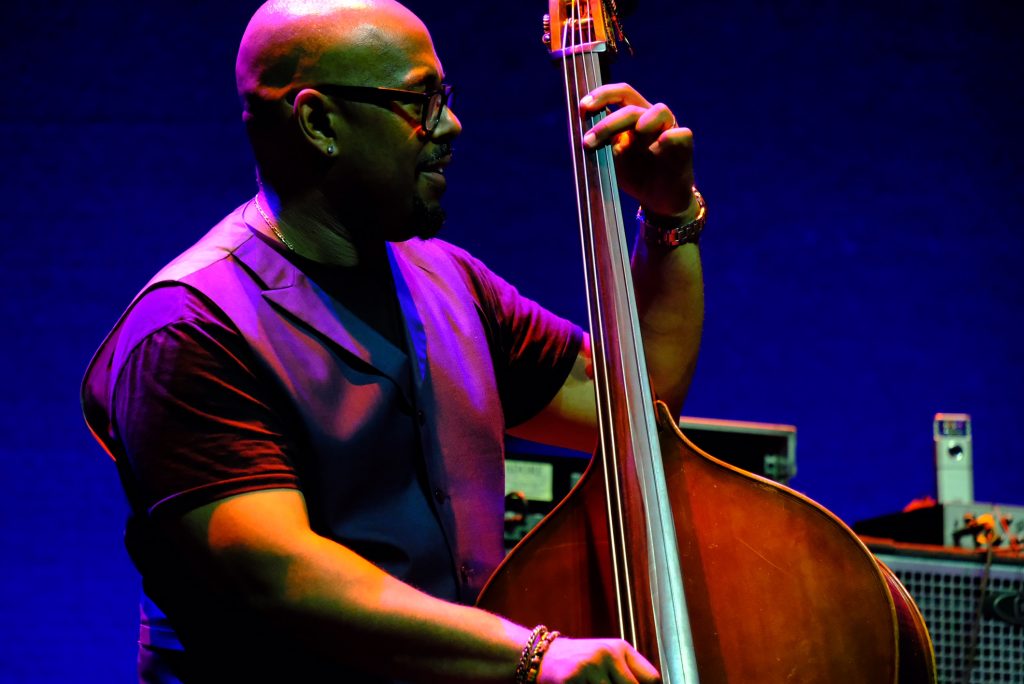 To return to my concert notes, let’s talk a bit about what McBride played with the TRT Big Band. He started with two pieces from his 2011 The Good Feeling album, “Broadway” and “Brother Mister”, respectively, both arranged for big band by himself. After announcing Meriç Demirkol (ss) and Utku Akyol’s (tp) names as a thank-you for their solos on “Brother Mister”, he told the story of the latter tune he wrote. The tune was inspired by James Brown, the godfather of soul music. According to McBride’s account, Brown had a strange habit of calling his colleagues, no matter how well he knew them, as “Mister” and never called them by their first names. But, only if he felt very comfortable with an old buddy, he would call him “Brother Mister”. And one day, in L.A., just a few months before his death, as they were getting ready for a concert in backstage, out of the blue, Brown said: “Get up Brother Mister McBride!”, which was, for sure, a great honour for McBride!

Now let’s talk a bit about the vocal of the night, Kandace Springs. I don’t know much about her, sorry to say. And this was the first time I listened to her live, so my comments will be based on my first impression. So, if you have any objections speak now or forever hold your peace. I think what my ears heard was a bit below her capacity and capabilities. It seemed to me as if she was, kind of, on power-save mode. But maybe the mostly-slow playlist preferred and the limitations caused by matching a vocal with a big band played a role in this. But here, my point is not about her volume or any technical show-off, it’s about the energy the voice disseminates.

On the other hand, I really do appreciate vocals like Kandace who are also the master of an intrument. Playing an instrument really connects the vocal with the rest of the group and helps her to get integrated into the architecture of the music. Yet, I cannot help one question popping up at this point. Is it really possible to be a great piano player and a great jazz vocal at the same time? I just try to think about the examples I know, who include great women of jazz I deeply adore, but cannot find a proper answer to this question somehow. Yet, it was a great joy to listen Ms. Springs singing the Lester Young song, “When I Fall in Love”, which was quite refreshening, helping me sweep off all these questions hovering in my brain like house flies. Besides, the aching intro of Mr. McBride was fantastic.

Now I will talk about my moment of tachycardia that night. It was when Joshua Redman was called on stage. I am mesmerized by him, since the day I heard his cover of “Doll is Mine” in his album Walking Shadows. So, I was very curious to see what he would do with a big band. Besides, I would listen to him live for the first time. So he came on stage. He was still energetic and young at heart with those famous grasshopper legs I used to seeing in his internet videos. Well, every musician/vocal gets his/her energy from certain part of their body. Maybe Redman takes his energy from these legs. Who knows? 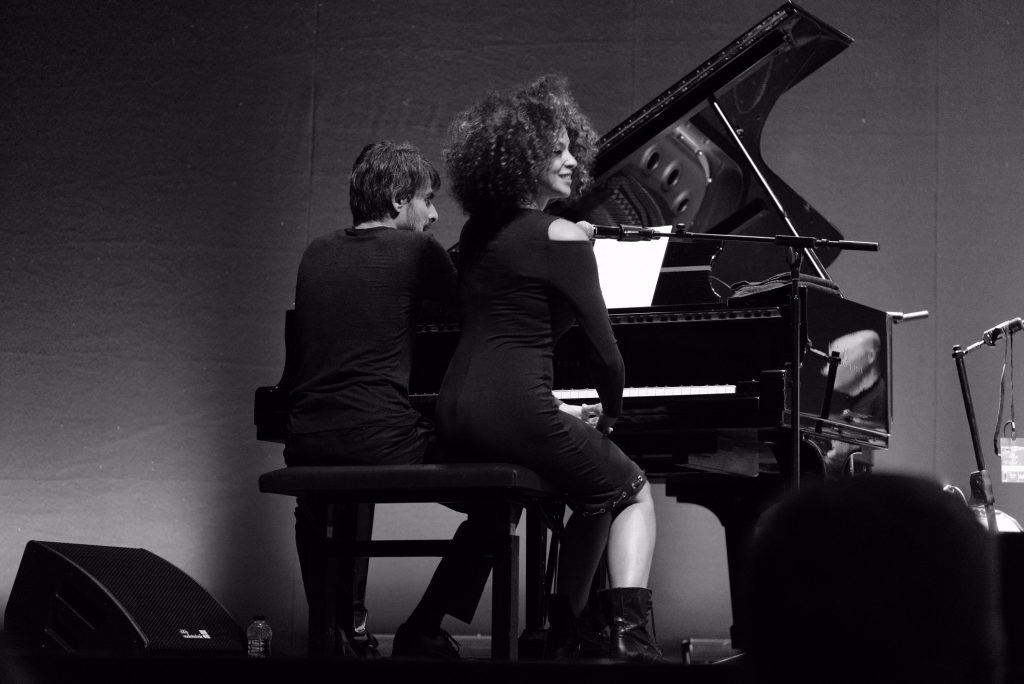 But the fact is that I had to wait for their totally improvized “On the Sunnyside of the Road” duo with Christian McBride, so that I could listen the real Redman. Because, to catch his evasive phrases one needs some silence in the background. This duo improvisation which highlighted their musical grandeur in my eyes, also reminded me of an important fact. This is the fact that the best performances in jazz are to come out of the most frequently played tunes, no matter how great the interpreters are. This was a good lesson for me, as a vocal always eager to jump on new songs but who always stumble and fall until she gets adapted to these new numbers.

“On the Sunnyside of the Road” was followed by a super energetic “Shakin’ Blake”, which enjoyed a great solo by the sax player Engin Recepoğulları, who didn’t let us down after Joshua. In the last song, Kandace was back on stage and she shared the same stool with Serkan Özyılmaz, to play with him in trades on the right side of the keyboard. And as an encoure we enjoyed a compact and totally instrumental “In My Solitude” from the Kandace-Christian-Joshua trio.

And it shouldn’t be hard for you guys to guess what was the most exciting and enjoyable part of such a great night. It to was to raid the backstage!

I hope, with the generous support of IKSV, TRT Big Band will continue to feature such great artists in these festival gigs, which will help this oldest yet still surviving Turkish big band to go ahead no matter what comes their way.

N.B.: The photos, which are reshared in this article, are credited to Tunçsel Gülsoy, one of the beloved authors of our magazine jazzdergisi.com. We thank him for these shots, each being as historic as the night they documented.