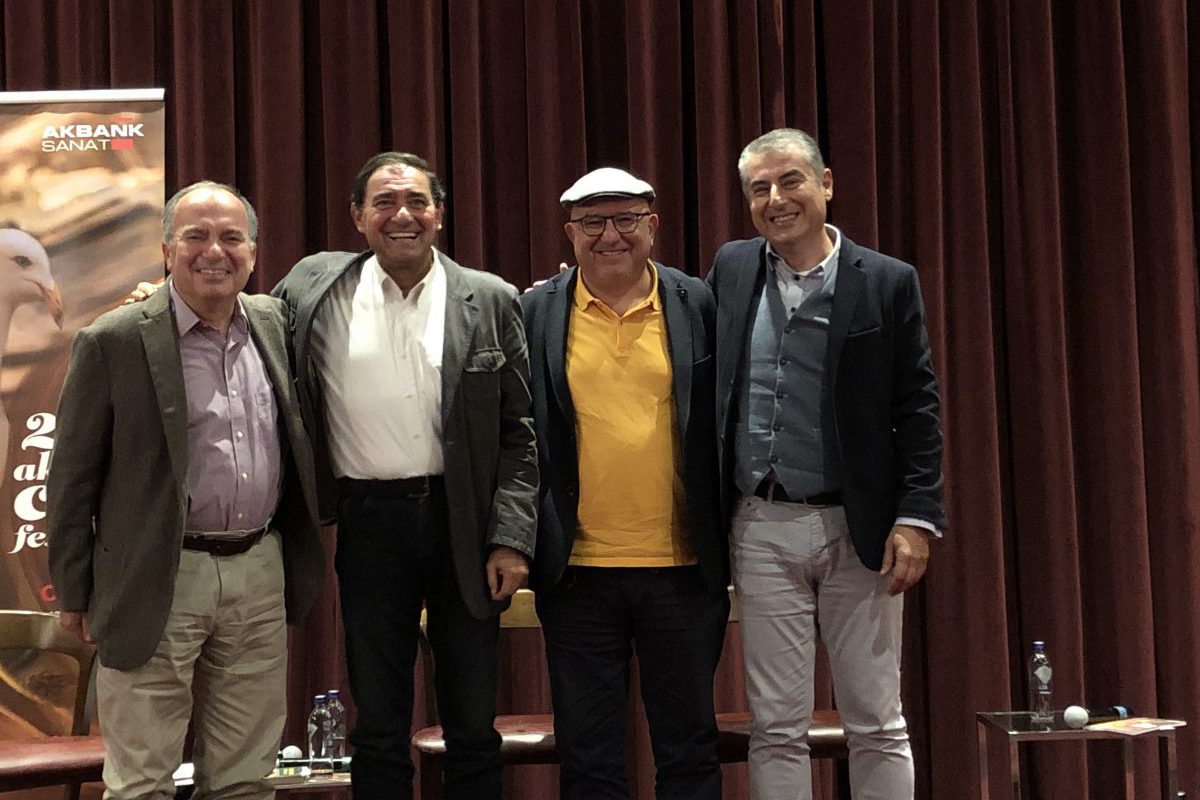 “Why Jazz?” panel took place on the 19th of October at Soho House during the 29th Akbank Jazz Festival.

Önder Focan talked about how musicians answer the question “why jazz” with “why not?”. He emphasized that this question does not have a single answer. Jazz isn’t only for the musicians but also for the listeners and that the interactions with the audience and other musicians is the essence of this. That is why we enjoy jazz when we listen to it in a club. In addition to playing the instrument well and learning harmony, what keeps Focan involved as a jazz musician are the dialogues he has with musicians and sharing this with the audience. This is another description of happiness.

Hakan Rauf Tüfekçi shared one of his memories after this. Tüfekçi’s rock lover friend went to Nardis Jazz Club years ago and wanted to leave after three pieces. He asked to be partially refunded on the cover charge at the door. This person defined jazz as “music that can’t be whistled”. He was a graduate of Boğaziçi university and a bright brain, but he regarded jazz as torture. Therefore, even though jazz gives such immense pleasure to Önder Focan, it doesn’t do the same for everyone.

Journalist Sedat Ergin also plays the bass guitar. He thought and wrote that “jazz is the democracy of music.” He told a story that involved Hasan Cemal about this subject. He mentioned that he came across many doctoral theses and research about jazz being the democracy of music after this. Ergin mentioned an unlimited space to improvize and to drag in any direction we want while emphasizing this space also has specific rules and their importance.

“Naturally jazz has its pros and cons just like any other genre of music. For example, one of its pros is that it is sincere. Since it is an improvisatory genre, one can see the naked emotions of the composer as their music is played in the moment. They don’t have the time to conceal, embellish or change their feelings since there is no prior preparation is involved. This is why it is possible to see the depths of someone’s soul through this music. Another positive aspect of this genre is the freedom it allows through the rhythmic push, liveliness, technique and various other characteristics”.

Hakan Atala was asked “How clever is it to sell jazz recordings in our time?” He shared that he has been trying to do this in a small scale at Lale Plak which has been in Atala’s control for about thirty years. He said he does this because he loves what he does.

The panel shed light to subjects like Ahmad Jamal being the voice of Nation of Islam, black panthers, how Miles Davis lead bands as he played and Blue Note. How Israeli musicians created a new branch in the scope of jazz was emphasized. The correlation of Charlie Parker’s identity and his music was discussed. The influence of Charlie Parker and bebop in today’s jazz was mentioned and the roots of jazz discussed.

Focan emphasized that the word “fusion” should be used due to the duality of ideas that synthesis produces what is synthetic and the need to approach what is natural, saying jazz itself is a fusion. He said that jazz embodies classical music, European marching band music, African American rhythms and church gospels and that it is open to influences just like any other living thing.

Psychiatrist Aytül Çorapçıoğlu, a surprise guest, has been to New Orleans. She answered the question “Are there psychological profiles for jazz musicians or their listeners?” She emphasized that jazz closely relates to emotions. She explained about catharsis as “cleansing” and told about its connection to music. Çorapçıoğlu mentioned a research done at Texas University which claims that jazz musicians have borderline personality traits and have high efficiency in expressing their feelings while she also mentioned the “listen and play” paradigm.

Akbank Sanat’s artistic director Derya Bigalı worked as a computer engineer for many years. She was aware of the jazz festival the bank was organizing and took over the responsibility of management of Akbank’s culture and arts branch saying “Money isn’t everything”. They worked on creating an audience for jazz in their initial years and today some concerts are sold-out days before the concerts. Bigalı said that “Jazz cannot be appreciated only by listening to it in big concert halls” and explained the genre’s meaning to her as “feeling the soul of the moment”. “It is an experience that cannot be repeated both for the musicians and the members of the audience; the audience cannot have a prejudice since they do not know what note will come next”. Bigalı drew the attention to improvizations which are different every time they are played and how jazz is unique.

Emre Adam, who also writes for Jazz Dergisi, said that he attended this panel on “Why Jazz” to broaden his horizon and shared his experience.

Another participant, who said that he presented his graduate thesis on “maqam music” a day before the panel at Mimar Sinan University, mentioned how improvization has an important place in Iranian and Turkish maqam music and that they were curious about its examples in Turkey. Focan mentioned that they traveled twenty five countries to play his Swing A La Turc album. He also mentioned that some mitigation is needed to adjust the notes. He talked about the work he has done with Okay Temiz and gave examples of maqam solos. He discussed the possibilities (and their lack) of adapting the trading tradition of jazz to maqam music.

Sedat Ergin mentioned his article “Can Hüseyni maqam be adapted to jazz” and gave examples of Uraz Kıvaner, Murat Verdi and Baki Duyarlar’s works on this. You can read the article here: http://www.hurriyet.com.tr/huseyni-makami-cazla-bulusabilir-mi-22211346

Hakan Rauf Tüfekçi drew the panel to an end by saying “jazz is freedom”.