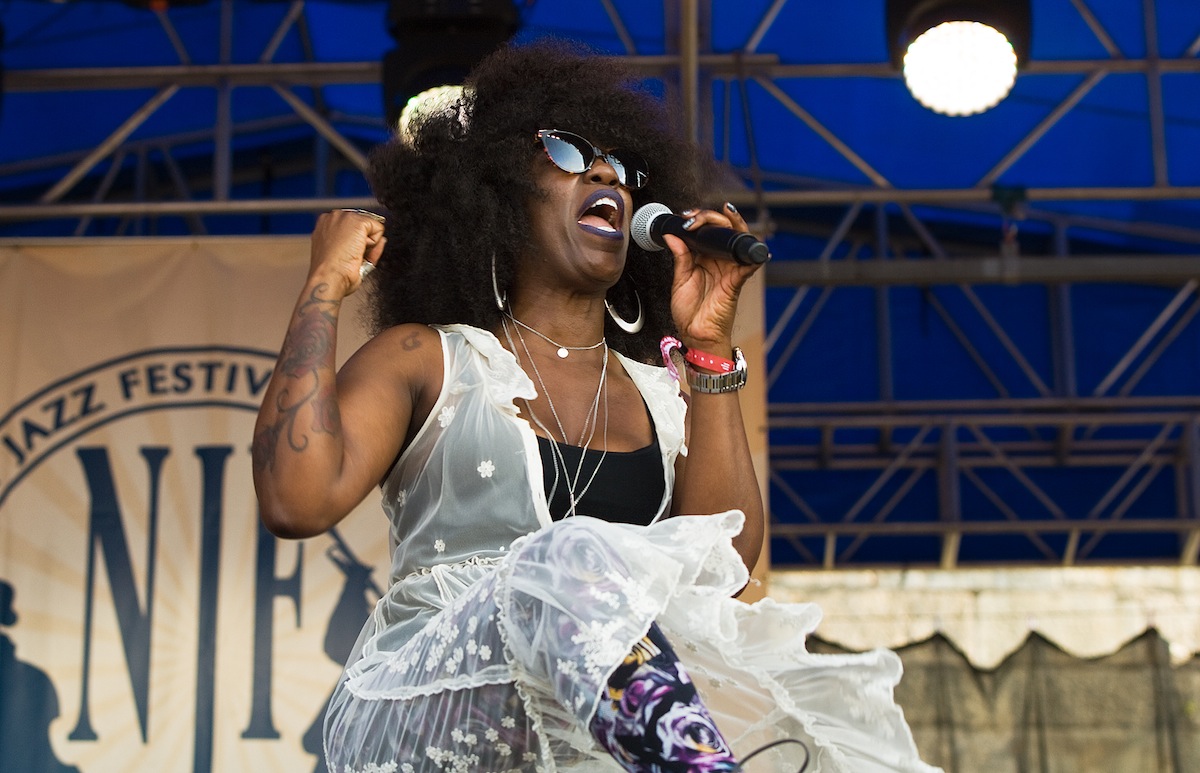 Newport Jazz Festival is getting ready to celebrate it’s 63rd birthday this summer. Since it’s beginning on 1954, the festival became an icon among the many of its kind. This years festival will be held at the Fort Adams State Park on August 4-6 and planning to host 50 bands and artists from mainstream to avant-garde jazz.

Looking back last summer, we arrived at the festival on a rainy day, as the legendary Heath Brothers were on the Harbor stage.

On the quad stage, Steve Coleman and 5 elements were remarkably combining post-bop harmonies with modern rhythmic language. In addition to band leader/composer Mr. Coleman, Jonathan Finlayson was on trumpet, Maria Grand was on the saxaphone, guitarist Miles Okazaki was joined by bassist Anthony Tidd and percussionist Sean Rickman on the rhythm section. 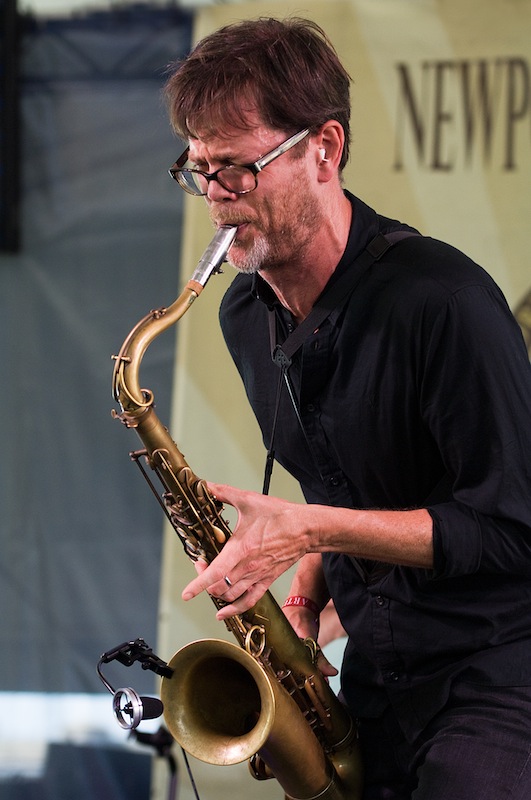 Another saxophone player, Donny McCaslin and his group performed a striking set on the Quad stage. His bandmates are, Jason Lindner, Nate Wood and Mark Guilliani and their elevated performance showcased tunes from their latest album “Beyond” as well as a Bowie-Brian Eno collaboration. Last year, Mr. McCaslin was featured on late David Bowie’s final record “Blackstar”.

McCaslin also shared some of his personal memories with the audience; as a high school student traveling Europe with his school jazz band, he was stuck at a hospital bed and the only thing kept him company on his walkman was Duke Ellington’s legendary Newport recording, and the rest is history.

On the main stage, Kamasi Washington was making his Newport debut and attracting a large crowd while performing tunes from his new album “The Epic”. Mr. Washington played with a lot of fire and lyricism, resembling the late John Coltrane.

Festival gala took place on the evening of the first day at the International Tennis Hall of Fame in Newport. Pianist Chick Corea joined by his trio mates, Christian McBride and Brian Blade to open up the concert. Their first selection was “On Green Dolphin Street” and they performed mostly jazz standards during their inclusive set. During the intermission, festival founder and impresario George Wein, informed audience members about his decision on stepping down from most of his duties on the festival committee, as well as giving reassurance about the future of the festival. On the second set of the gala, Mr. Gregory Potter and his band “Take me to the Alley” took the stage. With her highly energetic playing style, Lakeesha Benjamin was on the front. The bands performance of Marvin Gaye’s “What’s going on” was resonating with our times. 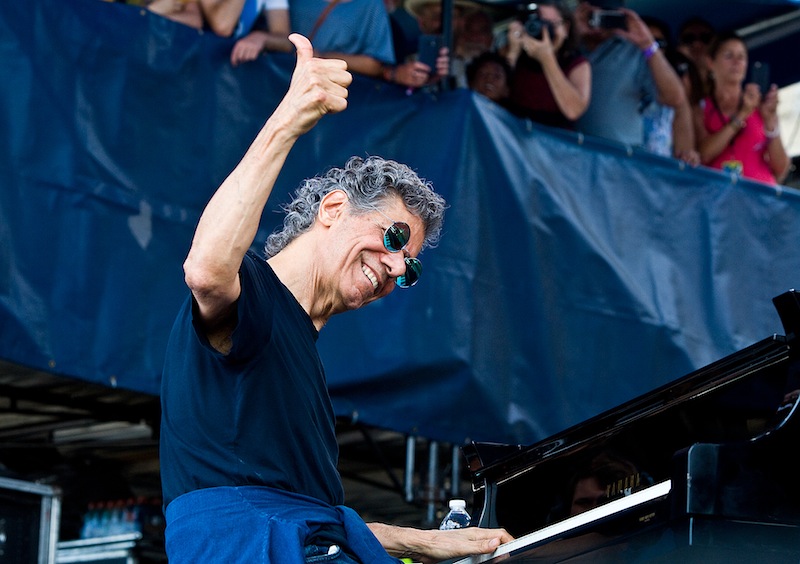 On the second day of the festival, all the tickets were sold out. The sun made a glorious return and the “Bad Plus” was on the main stage interpreting late Ornette Coleman’s classic album “Sci-Fi”.

Guitarist John Scofield, once more teamed up with saxophonist, Joe Lovano for a new album “Past Present” after more than a decade. They were joined by bassist Ben Street and drummer Bill Stewart on the Quad stage for an electrifying performance. With its catchy opening riff and 5/4 rhythm “Slicky” was the the first tune of the concert. The unique quality, only to be found between old friends was evident in their musical conversation, filled with fluent be-bop and blues phrases.

With it’s indoor set up and intimate offerings, such as movie screenings and interviews, “Storyville” was a fresh and welcomed addition to the festivals three outdoor stages. A highlight of the “Storyville” program was guitarist Mary Halvorson. She had a solo set, where she was inventively commanding her effect pedals and blending sounds with a unique esthetic touch.

13 years old pianist Joey Alexander was back at the Newport Jazz Festival. Young pianist had a meteoric rise last year with his debut album “My favorite things”. Alexander was joined by drummer Ulysses Owens, Jr. and bassist Dan Chmielinski on the Quad stage. 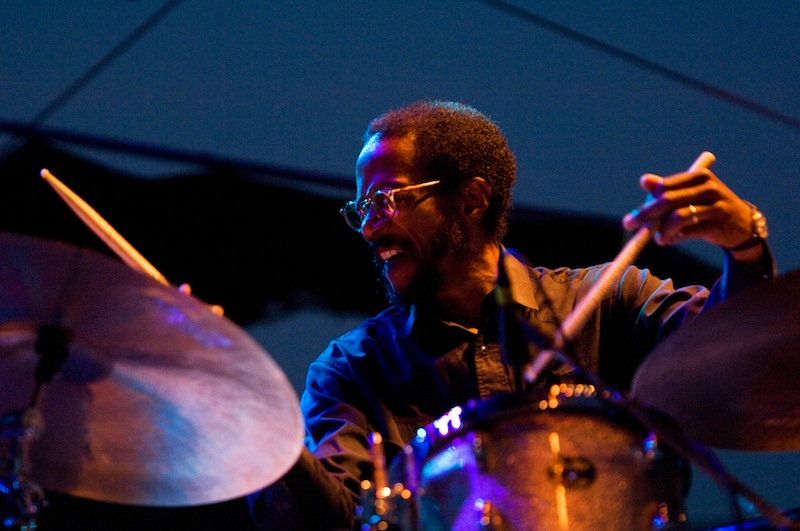 Master saxophonist Dave Liebman and his band were on the Harbour stage. Mr. Liebman described his groups as “James Brown band on steroids”. They performed tunes from their new album like “the Moors” and “Ugly Beauty”, with its 3/4 time signature an unusual Thelonious Monk tune.

Vibraphonist and composer Stefan Harris and his new project “Sonic Creed” were next on the Harbour stage. The musical dialog between guitarist Mike Moreno and flutist Elena Pinderhughes elevated the performance.

One of the last performances of this years Newport Jazz festival was by singer Norah Jones. Mrs. Jones made her debut on Blue Note in the beginning of the millennium and followed up with a string of very successful albums. She returned to the festival with her new band and a new record titled “Day Breaks”. As the sun was setting down, Mrs. Jones’s sang a beautiful rendition of Horace Silver’s classic composition “Peace”, which is all we need these days.