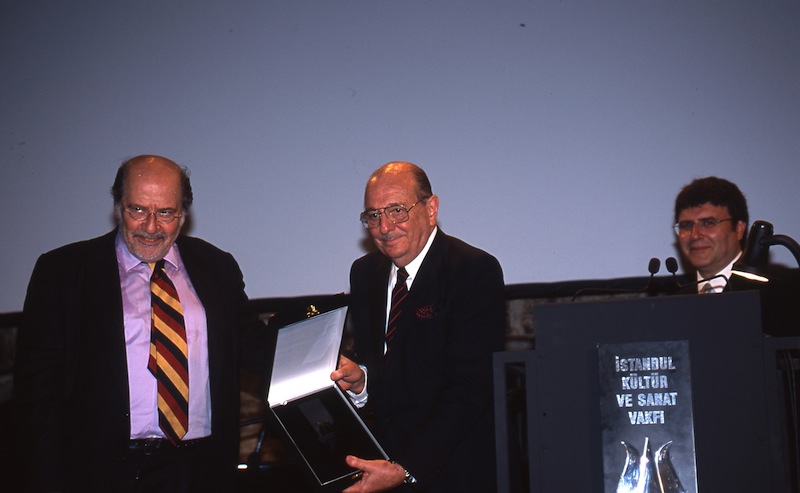 As jazzdergisi.com, we wish to look more closely at these award-winning artists in this series of articles.

World-famous music producer and composer Arif Mardin won 11 Grammy Awards (he won the “Producer of the Year” award twice), dubbed the Oscars of the music world, with the contributions he has done to the music industry through his life. He worked with many famous musicians such as Bee Gees, Bette Midler, Diane Ross, Aretha Franklin, Barbra Streisand, Phil Collins, Jewel, Chaka Khan and lastly Norah Jones, producing and arranging their music. Mardin has successfully produced more than 40 gold and platinum albums. He was awarded many times in his field and received “Lifetime Achievement Award” from NARAS (National Recording Academy of Arts and Sciences) in February 2001. Arif Mardin received his education at Berklee College of Music with the Quincy Jones scholarship and taught at the university for a year afterwards. He was given the honorary doctorate degree by the Berklee College of Music. He then worked with EMI for a while. 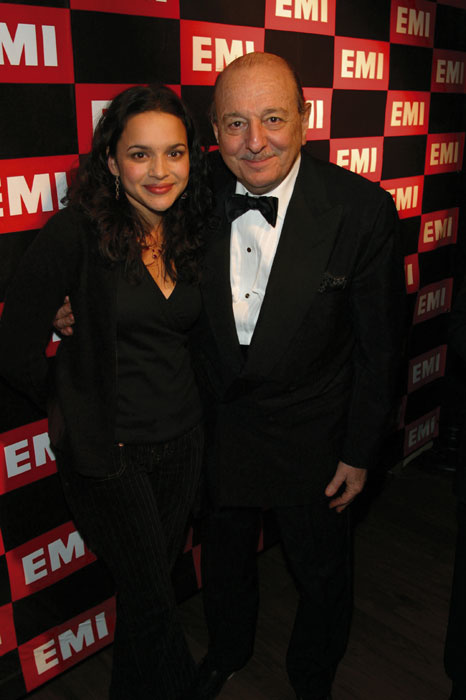 The article below was first published in the 43rd issue of Jazz Dergisi in 2006 after the artist has passed away.

Famous music producer and arranger Arif Mardin lost his battle with pancreatic cancer and passed away at the age of 74 in New York.

Arif Mardin has worked with many famous musicians such as Barbra Streisand, Phil Collins, Roberta Flack, Bee Gees, Bette Midler and Aretha Franklin, as well as giving Norah Jones to the music world as his last gift.

Recipient of 12 Grammy Awards, Arif Mardin was one of the most important music producers of the 20th century. He signed his name under many international success stories in his 40 year-long career. Mardin lost his life due to pancreatic cancer in New York.

WHO IS ARIF MARDIN?

World-famous music producer Arif Mardin was born in Istanbul in 1932. He enrolled in the Economics Department of Istanbul University despite his interest in jazz music and continued on to receive his degree from London School of Economics. Mardin’s life changed when he met jazz master Dizzy Gillespie and arranger Quincy Jones in 1956.

Arif Mardin received the prestigious Quincy Jones scholarship and became the first student to receive a scholarship in Berklee College of Music in Boston.

Martin started his professional life as Nesuhi Ertegün’s assistant at Atlantic Records in 1963 and worked as the vice president of the company between 1969-2001.

Mardin worked with Ahmet Ertegün and Jerry Wexter, both of whom are known as the names that made Atlantic Sound world-famous, in many projects and attracted attention with “Jive Talkin” he produced for Bee Gees.

He pushed the top lists with his work with Average White Band’s “Pick Up The Pieces”, Phill Collins’s “Against All Odds” and “Separate Lives” and Chaka Khan’s “I Feel For You”, and was nominated for about 60 gold and platinum records as well as15 Grammy Awards.

He was chosen for the Celebrities List by National Recording Academy of Arts and Sciences in 1990 and he was also named the “American Turk of the Year” by the Turkish American Association that same year. He was awarded by the “Shofar of Peace” in the honor of the 500 years-long friendship between the Turkish and Jewish communities by the Los Angeles Sepharadic Community.

Arif Mardin composed the soundtract of Bette Midler’s ABC movie “Gypsy” that same year and won his 6th Grammy Award for his work for “Original Broadway Cast Album of Smokey Joe’s Cafe: The Song of Leiber and Stoller” in 1996.

He received the “NARAS Heroes Award” in 1997, given by Atlantic Records-Ahmet Ertegün. He composed the score for the Warner Brothers movie “Why do Fools Fall In Love” in 1998 and produced Bette Midler’s “Batshouse Betty” and Diana Ross’s “Everday is a New Day” albums.

Mardin’s final work was “A Holiday Collection” which consisted of new work by “Jewel’s Joy”. He was honored with the “Trusteed Award” by National Recording Academy of Arts and Sciences in 2001 as well as the award for “Man of the Year” by Nordoss-Robbins Foundation which administered disabled children with music therapy. 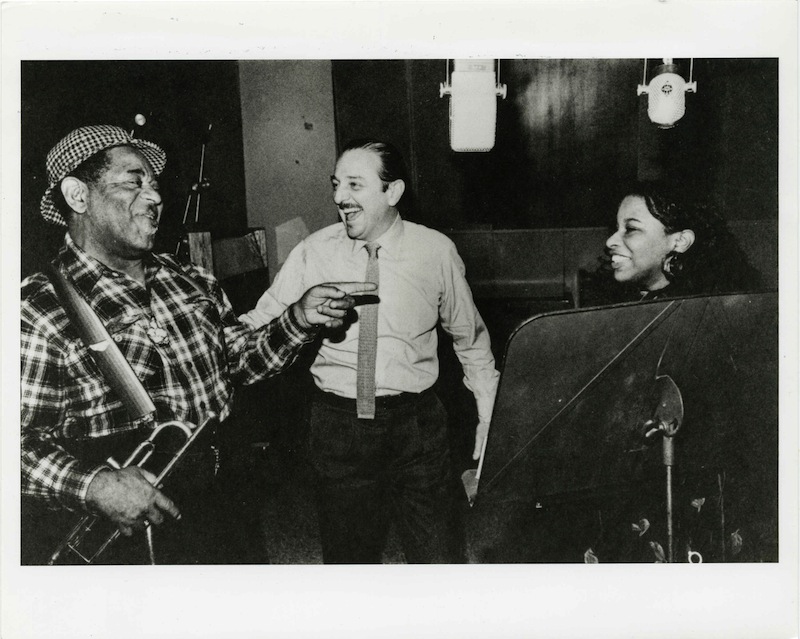 “The Creativity He Brings into Different Genres”

Ahmet Ertegün, the founder of Atlantic Records, said “While many producers work on melodies that become their fingerprints in every single project, Arif Mardin is making an impact on music with the creativity he brings into different genres.” about Mardin, who retired from Atlantic Records in 2001.

Mardin worked as a co-president of EMI starting with the September of the same year as well as the position as the general manager of Manhattan Records until 2004.

He won the Grammy Award for the “Producer of the Year” with his work for Norah Jones’s “Come Away With Me”, which was his first project at EMI. He also worked with Jones on her second album “Feels Like Home”.

He produced 6 pieces for Queen Latifah’s “The Dana Owens Album” with his son Joe in 2004 and received the “Lester Sill’s Philanthrophy Award” given by RP International in 2004.

The artist worked with the blind musician Raul Midon on his first album with his son Joe Mardin and recorded “A House is not a Home” with Aretha Franklin.

Arif Mardin spent 48 years of his life with his wife Latife Mardin, and is also the brother of Betül Mardin, who is the founder of the public relations sector in Turkey. The artist’s son Joe, a Berklee graduate like himself, works as a producer and arranger. His daughter Julie is a well-known avant-garde photography artist.

Mardin shaped the popular music in the past 40 years through his work with Bee Gees, Phil Collins, Roberta Flack, Aretha Franklin, Chaka Khan, Bette Midler, Modern Jazz Quartet, Barbra Streisand and Norah Jones. He was awarded with the “2006 Exceptional Achievement Award for Culture and Arts” by the joint efforts of Turkish American Foundation and Turkish Republic’s Ministry of Culture and Tourism.

His final works were the albums of norah Jones, Dianne Reeves  and Raul Midon. He never severed his ties with jazz in contrary to the popular belief. He made two recordings between 1960-1980. His 1969 album “Glass Onion” consisted of jazz arrangements he did with pop and soul pieces. His 1974 album “Journey” consisted entirely of his own composition and arrangements. Famous jazz musicians were featured in both these albums. He worked with classical music and modern big orchestra music in his final years. For example, he wrote “Suite Fraternidad” for WDR Big Band, and this piece was featured in the 1993 album “Jazzpana”.

Even though he kept saying that he was retired and that he handed down the torch to his pianist-arranger son Joe Yusuf Mardin, he was always surrounded with music. His final compositions “Piano Suite” and “Three Sketches for String Quartet” were performed by Hüseyin Sermet at İş Sanat on the 13th of May, 2006. The concert was the world premiere for these two pieces.

Arif Mardin’s award was presented to his son Joe Mardin during the ceremony that took place in New York.

The evening program of Montreux Jazz Festival was dedicated to Arif Mardin this year during the 40th edition of the festival. 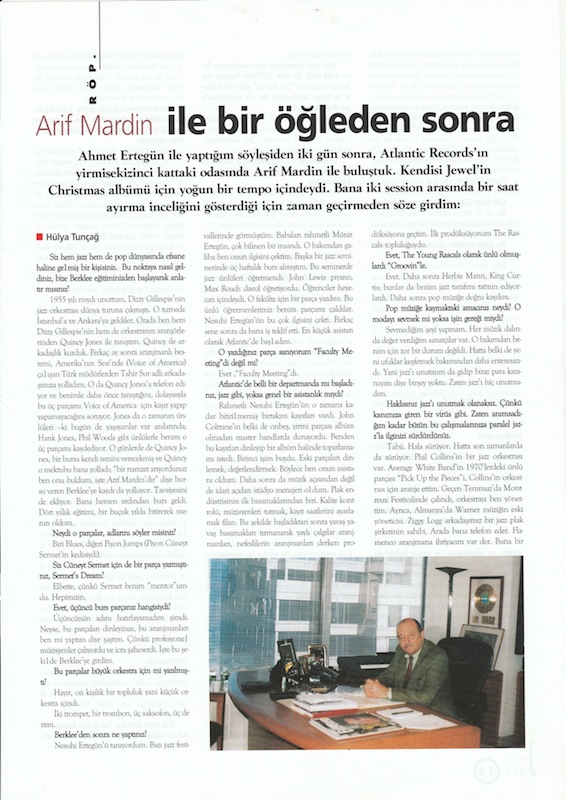 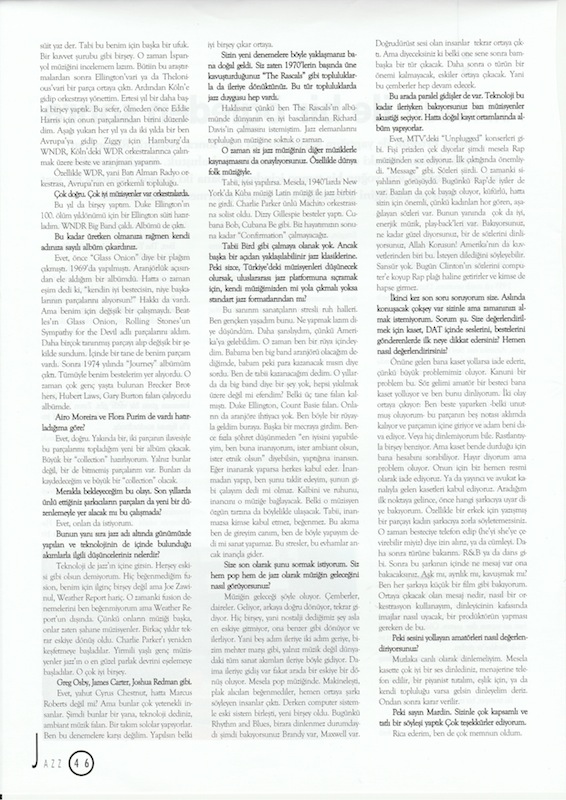