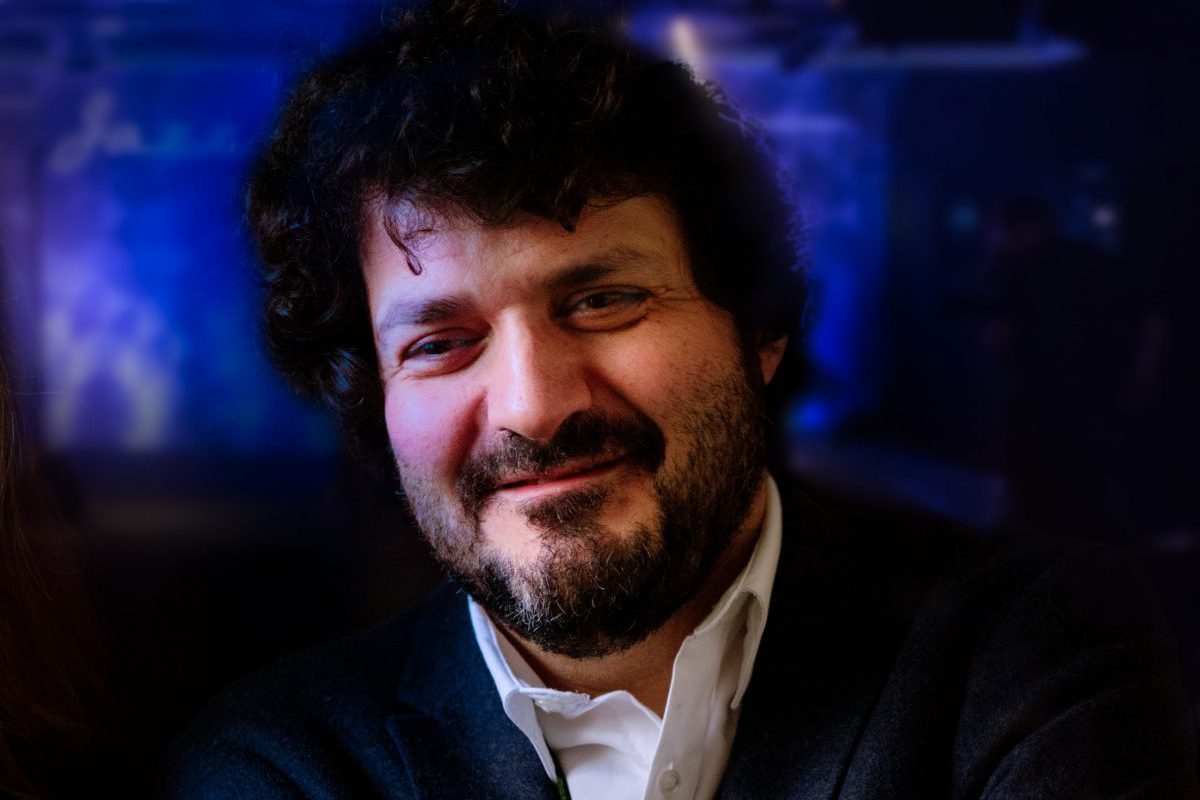 BE Contemporary is pleased to host PROCESSING, the first solo exhibition of musician and visual artist Oguz Buyukberber from January 22 to March 2, 2021.

BE Contemporary Art Gallery is hosting Amsterdam based artist Oguz Buyukberber whose audiovisual works are widely exhibited in Europe, with the solo exhibition PROCESSING from January 22nd. Oguz Buyukberber conducts music and visual arts together and PROCESSING presents the artist’s abstract expressionist digital paintings and audiovisual video works to the audience.

Oguz Buyukberber’s dramatic relationship with visuality begun as the artist coming to the world with an eye condition which restricts his vision to ten percent. Despite this, Oguz Buyukberber, who has been painting non-stop since his childhood, graduated from the most reputable Turkish arts school, The Faculty of Fine Arts of Mimar Sinan University. An internationally known bass clarinet musician, Buyukberber brings together music and visuals arts through practices of audio-visual art, digital painting, video art, graphic scores, live video and hand drawn animation.

In the exhibition, the series titled PROCESSING consists of digital paintings that Oguz Buyukberber produced after risky eye surgery in 2020 and during the ‘healing process’ of this traumatic experience following the operation. Buyukberber sets out with the idea that music or painting is nourished by the same essence of art, and although they find body in different forms over technique, they actually take root from the same source, thus adopts an interdisciplinary practice. Buyukberber’s digital paintings stand out with their abstract expressionist style including multi-layered, spontaneous, fluid and dynamic elements. Along with these structural qualities, the digital paintings in the exhibition evoke music.

The video works accompanying the digital paintings in the exhibition are made by Buyukberber combining the art of sound and video with a modular synthesizer and video manipulation and process this healing audibly and visually. Based on personal healing, the PROCESSING exhibition also provides the opportunity to experience a needed recovery process after 2020, a year marked with the pandemic.

PROCESSING will be open to visitors at BE Contemporary’s gallery space in Urla and on the online platform of the gallery until March 2, 2021.

We met with contemporary musician, composer and visual artist Oguz Buyukberber in occasion of the PROCESSING exhibition at BE Contemporary between January 22 – March 2, 2021.

“Processing” is the first online exhibition of the artist, which features the artist’s abstract expressionist digital paintings. The artist also has video art works in this exhibition, in which his unique and profound images are accompanied by live electronic music composed by himself adding to the viewer’s visual experience. It is a rare experience to observe that the artist’s expertise with music is reflected in his visuals, creating a strong sensation. He is passionate about making art, creating expressions and compositions despite, or maybe because of, his special eye condition. It may seem as a stable image from the outside however the longer it is perceived, notes come to the forefront, notes caused by the orchestration of the visuals creating a composition of emotions. All put together by the synthesis of colors, lines, and forms in his digital paintings. Seeing his artworks, the first painter who came to mind is Wassily Kandinsky. You can read our interview about his work and creative processes to get to know Oguz Buyukberber in his own words.

Would you like to tell us about how you became an artist?

I don’t even have a memory of when I started drawing. While that’s probably true for most people, I ended up drawing more than most kids do. I did it more than anything else during my childhood, because I couldn’t play most games other kids did. I was born visually impaired, so I drew all day, everyday, sometimes 8 hours straight.

I had as low as 10% total sight, without depth perception. Looking back many years later as a grown up, I realize that drawing functioned as the primary tool for me to learn to see and understand how things work in the world. My mom would let me touch everything in the house or at the grocery store. Without realizing, I was mapping things in my head. As an engineer, my dad taught me to draw perspective when I was six. By the time I was 8, doctors couldn’t explain how I could make the realistic paintings I was making.

I won numerous national and international awards, my paintings joined exhibitions that toured the world and in 1987, I was admitted to Mimar Sinan University of Fine Arts with the highest score.

So, I can say that the main influence on me becoming an artist has been my limited eye sight.

After being a successful clarinetist and composer, how did you begin making visual arts again?

I never stopped working on my visual art. During my art school studies, music became more and more the primary means of expression for me. This had to do with two things: My desire for “choosing” what I wanted to do (as making art felt like something I’ve always naturally done and haven’t chosen to do), and secondly, the limitations of my art teachers to understand my multi-faceted approach.

As amazed they were about my skills and productive drive, they were frustrated and disappointed to see that I wasn’t going be the next version of themselves. They tried hard, so did I. Nonetheless, I earned my diploma, and went on with my life to became a professional musician, without ever stopping working on my art.
Around the early 2000s, after my conservatory studies in Amsterdam, I started feeling confident about my place in the international modern music scene and I was encouraged to incorporate my visual art into my compositions and performances. I received numerous commissions to make graphic scores, live video, hand drawn animation and more.

How would you explain the comparison and contrast between visual arts and music?

When I was younger I would strongly advocate for the definitive split when it comes to how music and visual art relate to the concept of time.

Now the borders feel very blurry to me. Gestures, layers, speed, density, texture, shape and color are all equally indigenous to music as well as visual art.  Having formal training in both visual art and music, I see parallels between these two seemingly different disciplines.

How has your career developed and how has your practice changed over time?

In the late ‘80s and early ‘90s I was obsessed with photorealistic/surrealistic illustration, mainly using a traditional airbrush. (Not the airbrush tool in Photoshop, it didn’t even exist then!) As I grew older and as the computer technology took over the art of illustration, I turned towards drawing and painting, and my work started to become more and more abstract.

Studying music definitely had an influence on how I further developed my visual works as well. I started asking different questions about language and legibility, explored juxtapositions and the sense of depth. It started to feel like I was having a more personal connection to my artwork than before.

In the last ten years, my sight started getting even worse. This first led to depression and grief, however I was soon able to let go of my preconceptions about how my art should look. If I didn’t see the same as before, why would I have to try to make the same art? Like I said, my sight was already bad enough from birth, and to be able to draw those super detailed artworks until I was 40, I had to crush my body to get closer to the paper, canvas or whatever I was working on. To make what I see just a notch sharper, I had to turn my head sideways to compensate for my severe nistagmus (an eye condition where it’s either extremely hard or impossible for the eye to maintain a stable focal point). It was all good for my ego because I always got the “Wow!, you see details a normally sighted person cannot see!“ But it was at the cost of hurting my body to the extent which I had to have a neck surgery.

The last few years, I have been exploring larger movements and gestures, and their rhythm, as the core material for my drawings. After making my peace with working in the digital domain, I started using accessibility tools such as magnification, which give me a lot of freedom I didn’t have before. I feel what I’m working on right now is an inverse reflection of what I did when I was younger. Namely: instead of the drive to “show the world that I too can see”, I explore “sharing how I see with the world”.

How did you come about the idea to make and use your own digital art in the background during your live performances?

I never think of it as background. I understand that your question refers to the very nature of a music performance where the performing soloist is standing in the perceivable foreground from the audiences perspective. I experimented with presenting the same work without showing myself as the performer, and I got the same question asked the other way around: “How did you come about the idea to make and use your own music as the background of your visual art?”

My creative process for an audio-visual piece has always been a parallel workflow and therefor I don’t see/hear the result as one aspect being dominant. The result is rather, working out the same question in different mediums.

I aim for the experience of my audio-visual work to be like viewing a multi-layered digital painting. The subjective importance of any of its layers is fluid. On one viewing versus another you might think one gesture or layer has more weight or importance.

What things inspire you? Who are your biggest influencers?

Contrasts and contradictions inspire me. The contrast between “Tension and Release” which makes the most basic and oldest form of composition in any art discipline inspires me as much as a static non tension-release based work. The latter refers to a state of being, which in itself carries both the tension of no release, and no tension due to the lack of a build up. Both in music and visual art, I am drawn towards high contrast aesthetic and intertwined gestures whose speed is ever changing. Names would be hard to fit here. If I had to though, I’d like to mention Max Ernst, Paul Klee, Mauricio Kagel, Thelonious Monk… 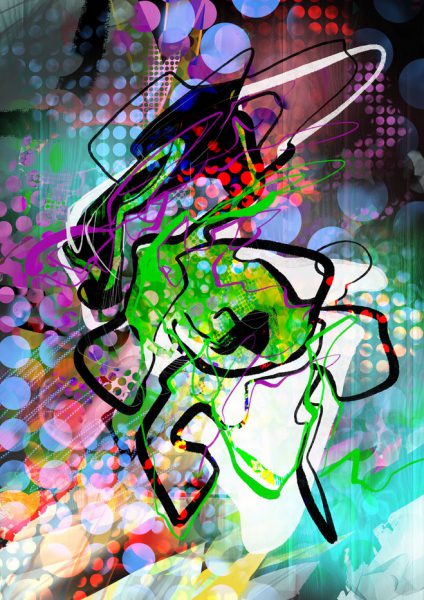 My studio is filled with shelves and shelves of sketchbooks. I draw everyday, and I have been doing that for years.

I feel a personal connection to both of these places for different reasons. Same is true for me for other places in the world, such as the US, Berlin, Vienna. A lot of it has to do with with whom I feel connected in those places. I thrive on traveling, seeing the world and connecting to places, things and people. But at the end of the day, external stimulus only becomes a tool that helps to get in touch with one’s own voice and the inner world.

How much of your Turkish background do you choose to integrate in your artwork?

I never chose to make a point to decisively integrate my Turkish background to my artwork. Neither have I consciously tried to stay away from it.

In your opinion, what role does an artist have in society?

Would you like to tell us about any future projects you have in mind?

If I ever feel ready, I would like to explore working with young children. I think that is most important and probably the hardest. No concrete plans on that front yet, but lots of contemplating.