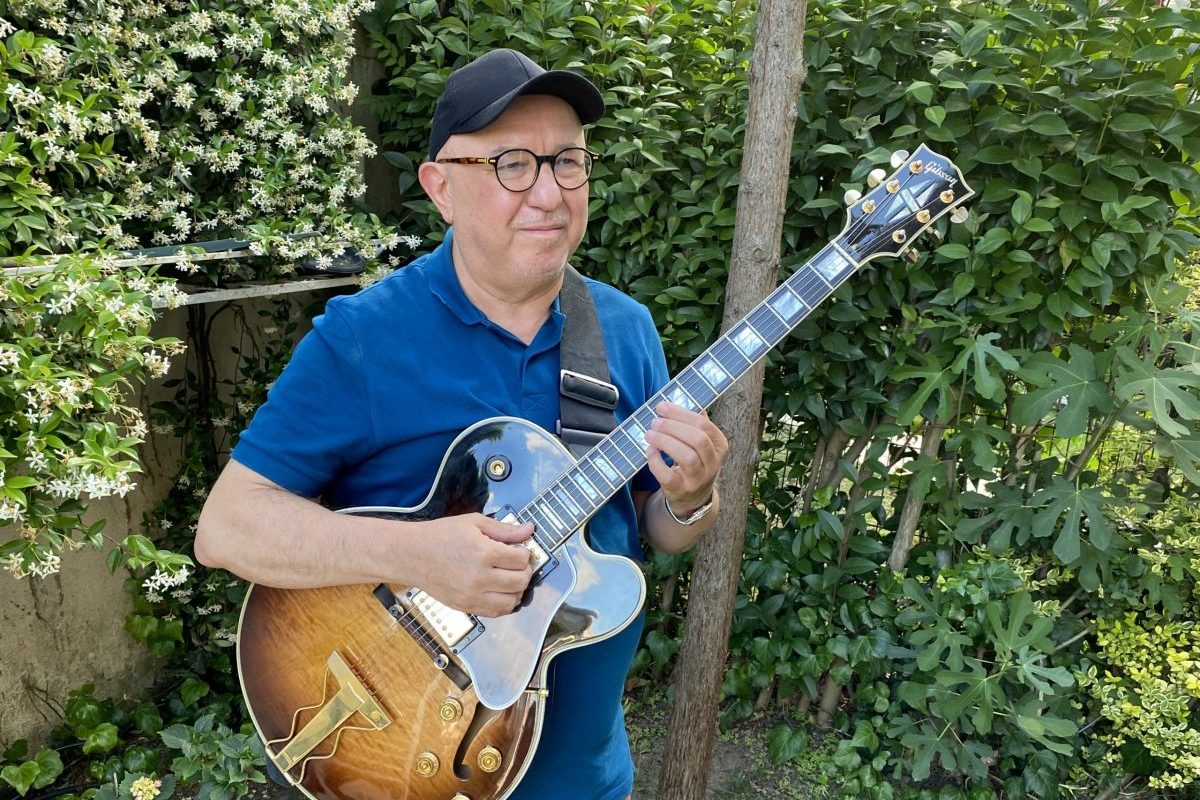 Master musician, composer, arranger and guitarist Önder Focan’s new album Aubergine/ Patlıcan was released on all digital platforms last month. So we listened to Aubergine/Patlıcan which we admired the taste, and asked him about the album.

This album has a theme. Could you please explain how the relationship between food and music inspired such a musical composition in the album?

Since my very old albums, there is a food theme somehow; O.K. for example. Bob is actually about kebab. After that, I have gastronomy-themed other songs such as Salatanın Suyu (Salad Juice) and İlk Yudum (The First Sip). The reason for that is that; after all, music is a culture, a lifestyle, so everything including those concepts such as literature, cinema, theatre, and painting is inside it actually. Lately, I’ve been thinking gastronomy and cuisine culture getting acknowledged as their own form of art themselves are an important part of our lives and are one of the things that make life beautiful. I’m not just talking about nourishment or filling the stomach; I’m talking about the taste and the effort put into for that and the sharing of it. The important thing is sharing. With the sharing, what kind of geography they emerged in, the effect of geography and lifestyle on eating and drinking habits are all things that interact with music as well as being a part of the culture.

The main idea of the project first came up in an interview with Eren Noyan actually. During our conversation in a friendly environment, the things that we think have no meaning and taste in life on their own, when combined with other elements, actually become extremely valuable things that completely change the meaning and flavor of the whole. I would like to exemplify that; if we think in a musical way, the bass guitar/double bass is not an instrument you would listen to solo for hours by itself; but its absence is impossible. I mean especially if in any of the music that I understand and love doesn’t have a double bass or bass guitar that gives the bass sounds and the bass line, the whole dimension and the volume of the music disappears. We agreed that aubergine is actually something just like that, it doesn’t really have a taste on its own, you wouldn’t eat it raw; but it enhances the meaning of other ingredients, and gives them a body and base, so to speak. We were inspired by that and Eren said to me, “Önder, why don’t you do an aubergine project?” So I wrote Karnıyarık (Aubergines with minced meat) with that motivation. For this reason, Karnıyarık is the intro piece that starts with a bass riff. Then I somehow forgot about that idea until I saw the posts on social media during the pandemic. Since everyone was locked at home, they had to cook so people were sharing those photos. I cannot cook, but I write notes. The compositions I’ve written are named after aubergine dishes, so I’ve shared those. There were 6 pieces in total and first we let it steep slowly, and then we made the album with the musicians contributing to the trio.

The harmony created by your togetherness as Önder Focan Trio is immediately noticed. How long have you been playing with Enver Muhamedi on contrabass and Burak Cihangirli on the drums as a trio? How would you describe the harmony of this trio?

The trio we formed with Enver Muhamedi and Burak Cihangirli started in 2017, if I’m not mistaken, so that makes 5 years. We, unfortunately, cannot play all the time but we have a repertoire and we get together when we get the chance. I think together we sound like a single instrument, like a trio. I think the harmony comes from playing a lot together. In fact, such a situation wouldn’t be the case if there were musicians who could not get along from the beginning; but since we are the kind of people who can speak and get along somehow and our ideas are musically similar, when we come together and play and these pieces fit, then a complete unity truly happens. That’s what I was trying to reach when forming this trio.

Can you talk about the musicians with whom you have shared the same stage and friendship for years and the recording process of the album?

Other musicians in the album are Şenova Ülker on trumpet and flugelhorn, Anıl Şallıel on tenor saxophone, Burak Dursun on trombone, and Uraz Kıvaner on piano and keys. We recorded the album at Hayyam Studios. We have actually played these pieces with Anıl and Uraz before, I have tried to identify the pieces they enjoyed playing the most and made the distributions accordingly. All of the three wind instruments play together in just one piece; apart from that, in some pieces, Şenova and Anıl play two wind instruments. I think that they also have a harmony in some way and play in accordance with the mood of these pieces.

What is your favorite dish on the album?

I wouldn’t say my favorite piece, but my favorite flavors are Melanzane alla Parmigiana and Soslu Patlıcan Kızartması (Fried Eggplant with Sauce). I prefer the ones with less meat.

There is a piece in the album called Musakka that you play bouzouki in. Can you explain the inter-cultural relationship of the track Musakka?

The relation is; that mousaka is a dish that exists in both Turkey and Greece, but it is not done in the same way. In fact the ingredients are different as well but the essentials are minced meat and aubergine nevertheless. There are also other things in common between the two cultures; one of them is Zeybek in 9/4 and the other is the Nikriz motive. And I wrote a Zeybek in 9/4. I’ve played bouzouki in the intro and outro. Actually, I was planning to choose the zurna as the main theme instead of the saxophone; but we trusted Anıl’s skills there. We start playing the 9/4 melody with a double-time feeling from the second chorus. When it’s double time it’s like 18/4; four 4/4s and one 6/4 or four 4/4s and one 2/4. We played the solos in this way. The solos sound like swing in 4/4, but if we divide the tempo in half again, you can hear Zeybek in 9/4.

You mentioned that in addition to great pains, loves and happiness; ordinary moments of daily life can also be told in music. In fact, the 36 mm Biometric piece, which caught my attention when I first heard it years ago, is one of such moments. In fact, can we say that you have expanded the areas expressed in music with the pieces you have made, and that you have removed the borders in a way?

Removing the borders is not one of my intentions. If we look at the pieces especially the instrumentalists in the jazz scene, more in the Bebop and later periods, the names of these jazz originals are already in that way. For instance, Take The A Train is a piece that tells you which subway to get in, the whole aim is to find how to get somewhere the fastest. For example; Ornithology means bird science, Anthropology is obvious, and there is another piece called Serenade to a Bus Seat, Route 66, etc… Since English is our second language, we perceive these pieces are expressing divine feelings; however, when we translate them into Turkish, it is revealed that there are parts and stories that are in the general flow of life. I actually have pieces called 36 mm Biometric and Sunburst Cat. When my son was little, one day he said to me, “Daddy, look, this cat is sunburst”. And I really liked that so it became a piece that I wrote based on that. The piece Ali Kumda Koşuyor (Ali runs on the sand), came from the moment when Ali was 3 years old, running on the sand. I like to write about the momentary joys of life, because I think that the happiness and real pleasure in life are these little moments of happiness. I’m not the inventor of it actually. This is also the case for artists of the bob and post-bob era and today’s musicians. Let’s just say that I am one of those who do this with Turkish words and Turkish names.

Önder Focan is an active jazz guitarist as well as a successfully productive composer and engineer at the same time. How do you keep the balance between all these? Do you have any advice on using the time in a balanced way?

Maybe it’s my character, maybe it’s a discipline brought by the schools I’ve studied. I love being active. I like to use my time well and do more than one thing. I don’t like to sit around to be honest. Maybe I was able to do and produce much more with the habitual discipline this brought. There is also Nardis’s music directorship not included in this question, Nardis has all the financial flow and control of it, there is composition, and in fact, there is the arrangement.

It is a little difficult to give advice on using time in a balanced way. I believe it’s completely the result of a discipline rooted in childhood or the first education. I mean, I can’t really say that if you do this, you can use your time well.

Can you talk about the publication and release process of the album?

We recorded it in October 2021, the mixing and mastering process has passed. We release the album in two forms. One in digital platforms, and the other is as vinyl. The singles were released every 15 days on digital platform. Album cover and all that is ready for the vinyl. The mold is being made abroad, so an order has been placed for the mold, we are now waiting for the making process. I hope we will be able to distribute it in print by the end of June.

Could you share the concert dates in the upcoming days where we can listen to Aubergine/Patlıcan?

We had Akra Jazz Festival where we will play not the whole album but a few pieces, and we will look after it. Maybe in Nardis or other venues as well. We have also played at The Badau and Nardis before.