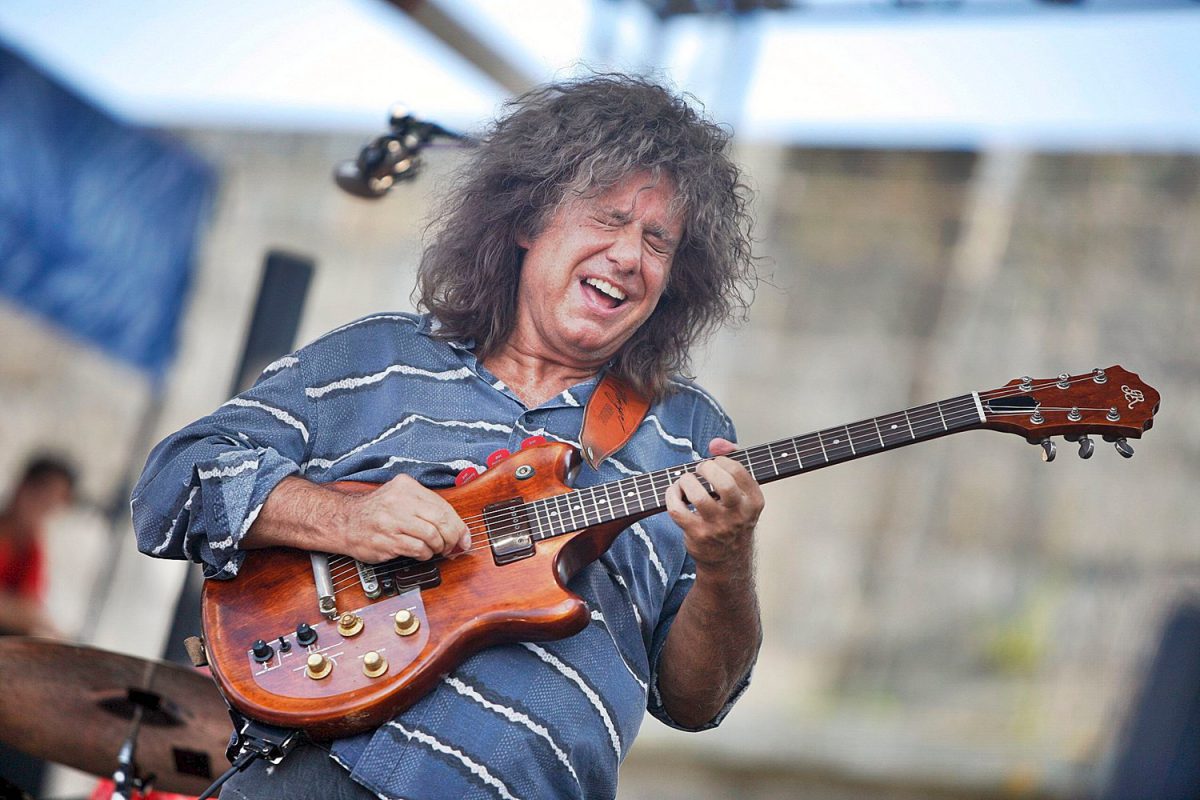 I am thinking about my favorite Pat Metheny records… “Bright Size Life” from his first album, which became his signature, plays in my head the first. Bravo to Manfred Eicher’s taste! I am a fan of almost all versions of this piece. There is that concert duo with the Swedish guitarist Ulf Wakenius… Ulf’s guitar is darker and foggier. Bass guitar seems to answer; even though Jaco’s shoes cannot be filled… And “My Song” from One Quiet Night, which won the “Best New Age Album of the Year” award at the 46th Grammy Awards… Of course it isn’t a piece by Pat contrary to what the title suggests. This piece is a lyricless Keith Jarrett piece. I really wish to write lyrics for it some day, it is on my list…

The reason I am writing this article after a long break is Pat’s newest album From This Place. The album consists of 10 pieces. All 10 are his own compositions. It was released through Nonesuch recording label from California on the 21st of February and was welcomes by the international jazz loving audiences.

Pat Metheny… A guitar messiah who received 20 Grammy Awards, 7 of these being consecutive ones he received with his own band! He translated the brass elasticity to his guitar by learning to play the trumpet as a kid and by the influences of his idols Charlie Parker and John Coltrane. He became a super groovy storyteller who combines the techniques of ol with the contemporary music language. He played with Gary Burton for 3 years in the meanwhile. But he never really liked being called a jazz guitarist. That is why he had a creative, or more so an expressive, process to rise above these labels with his music. He recorded with his own trio, or as a solo musician, with Ornette Coleman, Steve Reich, Charlie Haden and Brad Mehldau and he has also written music for Hollywood movies.

Now, this boy from Missouri who hasn’t seen the ocean until he was 18 years old decided to paint his musical adventure of 43 years with an symphony orchestra to back him up. The image on the canvas is a storm that has overtaken the endless plains where the ocean is merely a dream! His 66 years of experience lies calmly in the eye of this storm. The whirlwind consists of things he deemed better to be expressed. He put everything that made him who he is in there and created a 90-minute album that is a big piece to swallow. In the background of the canvas (I don’t mean to offend anyone; it just seems that way to me) stands the Hollywood Studio Symphony Orchestra lead by maestro Joel McNeely. And the color range is overpowered by the strings in contrast to what we are used to hearing in big bands.

Pat’s new band that he has been playing with since Spring 2019 is naturally in the foreground. But this new team includes one of his old “students”: Mexican drummer Antonio Sánchez. He got into Pat’s old band after trials in 2002 and recorded Pat’s Speaking Now with young bassist Richard Bona, who replaced Jaco in those years and received a Grammy Award. Sánchez benefited from Pat’s guidance in the following years when he released his own albums. He played in Pat Metheny’s album The Unity Band, a “high octane” album according to the English jazz critic Mike Hobart, with Chris Potter and Ben Williams.

Let’s look at the band members who are actually new. There is a female double bassist whose name I haven’t heard before. Half Malaysian half Australian Linda May Han Oh. Linda was raised by a family who immigrated from China to Australia and she studied Dave Holland’s solos on Indian rhythms as a hard working music researcher. The musician is 35 years old now and lives in Harlem, New York, and her background inclides an album that features some of her own compositions that she recorded with Ambrose Akinmusire.

I am not familiar with the name of the pianist either. Gwilym Simcock, a pianist born in the Wales, combines jazz with classical music in his projects. Simcock occasionally also plays the horn and has given concerts in Wigmore Hall and got Chick Corea’s support. To summarize the others who have contributed to From This Place, Louis Conte, famous session musician, plays the percussion instruments, Gregoire Maret on the harmonica and Meshell Ndegeocello on the vocals.

From This Place is the first album after his 2014 album Kin (←→) that includes his new compositions. The orchestral arrangements are done by Gil Goldstein and Alan Broadbent. But the most interesting aspect album is the fact that Pat showed the band the pieces on the day of recording. Yes! This behavior goes back to Miles Davis’s philosophy “Let’s play the same pieces during the concerts to form common language, and when we walk into the studio, let’s get on with new pieces and produce fresh music.” The person who introduced this idea to Pat is a musician he used to tour with: Ron Carter, the double bass legacy! Therefore Pat put aside all his compositions that they have been playing in the concerts aside and took our fresh new compositions out of his bag and they recorded From This Place without doing any rehearsals. Antonio Sánchez, Linda May Han Oh and Gwilym Simcock saw the pieces for the first time and created miracles in the studio, while one must keep in mind their collective experience that enabled this.

“America Undefined” is the first piece of the album. The title takes inspiration from the words of James Baldwin, African American author, activist and poet:

“The very word ‘America’ remains a new, almost completely undefined and extremely controversial proper noun (…) No one in the world seems to know exactly what it describes.”

Album’s third title “You Are” is similar to this piece, which draws a huge arch in the album’s sonic map.

“From This Place” is a melancholic and thought-provoking piece that was written in the morning of Trump’s appointment as the president. The piece, which also gives its name to the album, features Meshell Ndegeocello’s vocals. “The Past in Us” showcases Gregoire Maret’s heart-wrenching harmonica. We witness Antonio’s strong intro with the Hollywood Studio Symphony in “Wide and Far”. Then there is Sixty Six written for the musician’s 66th birthday.

The album is available on Metheny’s official YouTube channel as well as Spotify and other online platforms; even though Lale Plak is now a telephone store, you can still order it from Nonesuch Records’ site as a CD or LP or buy it digitally from Apple Store.

I would like to conclude this article with two long passages from a terrific interview Pat gave to RNZ radio in New Zealand in November. These summaries are compiled from Pat’s words. The link to the original podcast is below in the “Sources”.

“Music is creating and that creative idea comes to your mind before it meets the instrument. You try to express what’s in your mind with whatever material you have at the moment. Sometimes I sit at the piano and play the ideas as much as I can.

Let me explain. Let’s say you are in a country whose language you don’t speak well and you are thisty. What is your concern? To find the water you need and to drink it. You explain your problem somehow and you drink that water, right? I can share the stage with Beyoncé tomorrow to express an idea I have or with New York Philharmonics, or with a heavy metal band…

That’s why separating music into its genres can be problematic. I find the word “jazz” idiotic. A lot of musicians are uncomfortable with this word anyways. We look at music from a wider perspective. I am talking about a transcendental world that expands beyond . Art Tatum, Charlie Parker and John Coltrane’s super advanced playing methods.”

“It is important to portray what makes you who you are in music. But that doesn’t mean directly alluding to those sources that make you who you are or bringing them into your music. It is about describing your relationship with those sources. These sources are not on the street; they are inside you.

Maybe you can look into what people have done before you, what kind of a language they created in depth for a decade. But you are concerned with what you will do with your instrument. This is a lifelong process. You can take your instrument the first thing in the morning and see what you can do with it. You might play with harmonies; countless ideas flood in. You can even get a new instrument made for these ideas. This is a journey to become who we are.

It is disrespectful to imitate others. You will never get anywhere close to the person you imitate and you cannot be yourself. Yes I played well, as good as them, but what did I achieve?”

Jazz in the Time of Corona - I