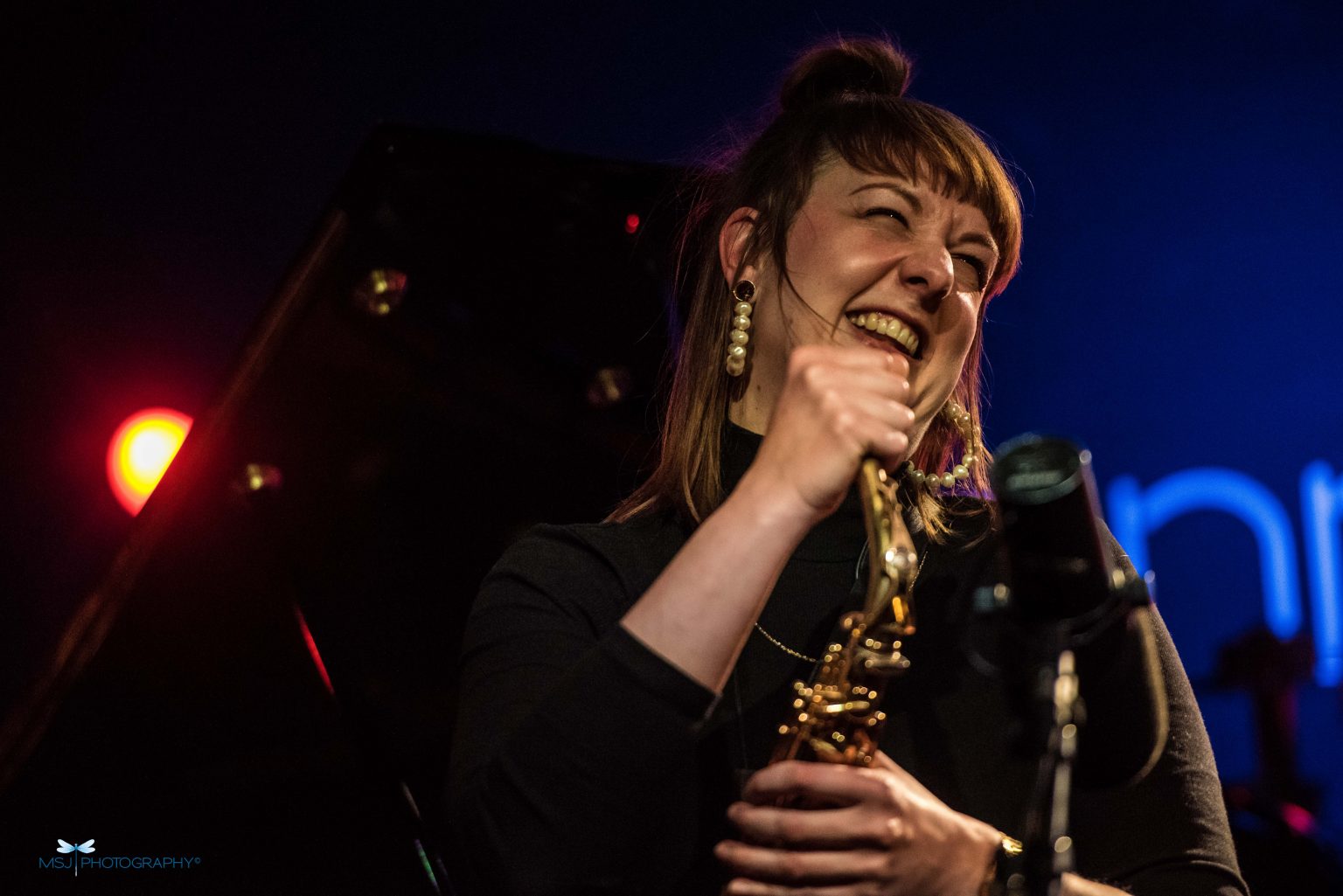 Rachael Cohen’s lively presence on stage and her playing always create an atmosphere and climate of positivity and energy, even in the most surprising circumstances. Feature for International Womens’ Day by Sebastian Scotney 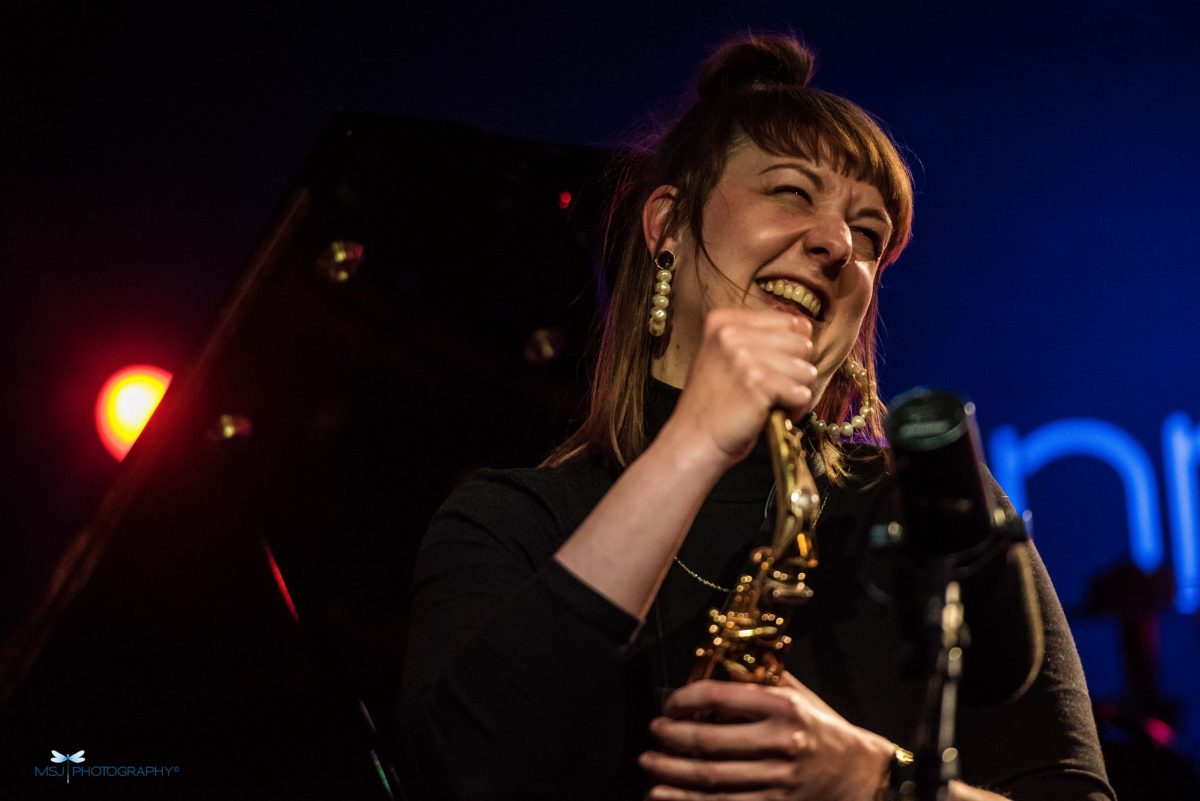 “It doesn’t get any better than this,” wrote Newcastle-based critic Lance Liddle when Shetlands-born, London-based alto saxophonist Rachael Cohen performed on the main stage at Ronnie Scott’s on 4 January 2021 (*). It was just the beginning of the year, but he instantly put it forward as a contender for gig of the year: “Although we’re only a day short of Twelfth Night, I’ve already got four names pencilled in (4HB) for when the polls come around later”.

This was not a normal gig in front of a live audience. The performance was during lockdown, the club was completely empty apart from the band themselves and a few technicians; Lance Liddle had watched it on a livestream. But such is the inner strength of Cohen’s communication through her playing, and the incredible rapport which she builds through her stories and announcements, she transcended the almost complete absence of audience.

People tend to assume those communication skills are innate, but, as she underlines, this is an aspect of her craft at which she has worked hard. “The first time I played Ronnie’s I put together a script with every word I was going to say, and practiced speaking it in front of the mirror”. People sometimes compliment her with phrases like “You’re so talented”. She laughs, and gives me the ironic quip with which she is sorely tempted to respond: “Ooh. If I’d known that’s all it took, I wouldn’t have worked so hard!”

That reputation of being prodigiously talented has been with her since her student days. She spent her teenage years in Edinburgh and was a pupil at the Edinburgh School of Music. She had her first lead alto saxophone chair in a big band at the age of just fourteen; it was  the role she has in both the National Youth Jazz Orchestra of Scotland and the Tommy Smith Youth Jazz Orchestra.

When it came to choosing a music college, Cohen was offered scholarships to study jazz saxophone at all of the conservatoires in London, but actually chose Birmingham Conservatoire. Once there, among the first things that happened was that a buzz got out…about the level of her keyboard proficiency and sight-reading. “I went a long way with the piano,” she remembers. She suddenly found herself in demand from the classical students as an accompanist. And yet, with typical generosity of spirit, she attributes those keyboard skills to having worked hard for one particularly inspiring musician and teacher during her secondary school years in Edinburgh, Lynda Cochrane, a musician with a huge range of activity.

Pianist Lynda Cochrane was a clear role model for the varied musical roles that Cohen herself seeks out for herself these days: “I’ll do a Jazz Refreshed gig. And then I’ll play at the Oxford Tavern. And then I’ll play funk and soul grooves for breakdancers. And Ronnies and the Vortex. And horn sections for hip hop groups and singers. I do all of those things because I like to do all of those things.”

People around the jazz course on the conservatoire in Birmingham remember how she made jaws drop with her playing (Donny McCaslin’s in particular), and also with her writing: Dave Holland took compositions of hers back to his students at the New School in New York.

That openness to working with a range of people suits her character. I heard a remarkable standards gig at the Herne Bay Jazz Festival which she led with real panache and flair. Whereas she likes a wide range of musical activity and to work with a wide range of players, she, logically, has a different approach when it comes to developing her own compositions: “For my originals I only want certain people doing it. To build something to the best it can be, you really have to know the people. It is not a sound you can just create overnight”.

With her compelling laugh, she describes a moment in the process of developing tunes she particularly enjoys: “We tweak it. Move it around. Leave bits out… I find that my music really works when it doesn’t belong to me any more. When I can hear it and say ‘Who wrote that – Ooh… ME!!!’. 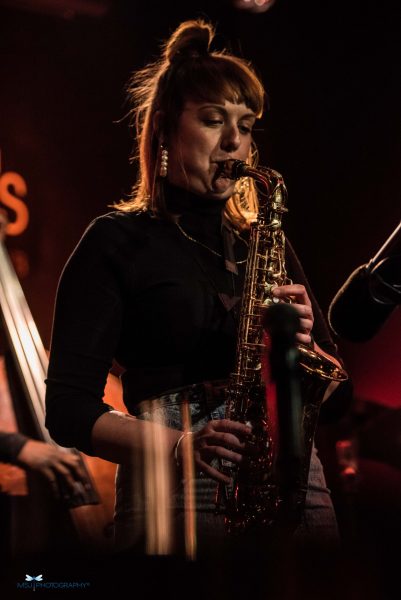 That positive energy, that drive, is making things happen for Rachael Cohen as an educator too. She is now working with ensembles at the Royal Academy of Music. In September 2021, she joined the teaching staff at the Guildhall School. And how did that happen? A student at the school was so enthusiastic about wanting to continue outside lessons with her, it was not long before that keenness spread to the jazz faculty as well – and they asked Rachael to join them full-time, so that the other students could benefit too.

Influential programmers also like her and like to book her: Birmingham’s Tony Dudley-Evans says : “I must admit I am often wary about straight-ahead players, but Rachael Cohen has always been so inventive and creative with it, I love her playing.” And Sarah Weller from Ronnie Scott’s says: “As a person she’s lovely to be around. And her enthusiasm for jazz and for bringing on the next generation makes her an ideal host for our Late Late Show”.

As a gigging musician, she has been permanently busy. She also fits in a lot of trips to New York. But as a recording artist, there has only been one album in her own name so far – “Half Time” (Whirlwind Recordings) – in 2013, with a prominent role for guitarist Phil Robson. The critical response to that album was unanimously positive, but it contained something which still surprises her: it put an emphasis on the affinity in her playing with that of Lee Konitz. Almost a decade later, she is still nonplussed by that pigeonholing. “You don’t find out how to do one thing by only listening to one thing. At that time I listened far more to tenor players.” And alto players? “Parker. Still. Forever!!!”

One particular focus of listening is Joe Lovano: “I have listened to him –a LOT!” As she talks about his playing, it gives some clues to the kind of playing she aspires to. And what does she get from listening to him? “Sound. The individuality in that sound. The individuality of the concept. The first time you hear Lovano, it can be hard to decipher what it is he’s actually doing – but then YOU try that. He is such an accomplished saxophone player. So expressive and so dynamic, The softness of sound is amazing. His tone is so much like wood. He always plays with a big range. He’s also such a nice guy. A good human being. That’s my guy!”

For this International Women’s Day feature I asked Rachael Cohen about her role as a role model for younger players. She resists stereotyping. She says: ‘I’ve got a big personality and I know that that has helped me to navigate what can be a difficult industry for women (I’ve had my fair share!) but the idea of being a role model is thrust upon women in a way that it isn’t for men. Just because we’re women we have to be role models?! It’s a lot of responsibility. I just hope that through my playing I can inspire younger people, and especially women, to trust the process. There are no shortcuts – it’s a lifelong dedication to your instrument and to the music. So enjoy it!”

And talking of enjoyment, it is high time that more people knew about the amount of it that Rachael Cohen brings to her playing, to other musicians, to students and to audiences. She is a positive life-force and a truly remarkable musician.

Background
This article has come about in the context of a collaboration between several European jazz magazines, where female musicians are widely exposed under the headings WOMEN TO THE FORE and INTERNATIONAL WOMEN’S DAY.