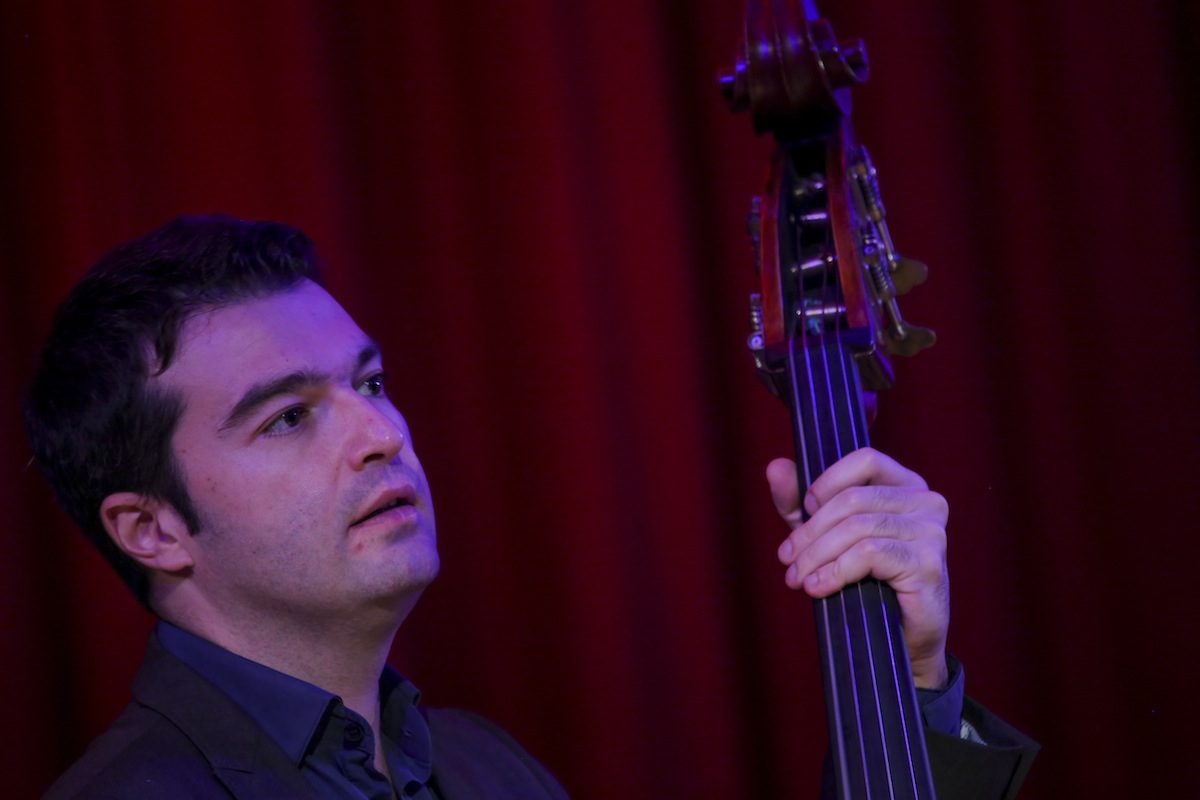 Kağan Yıldız, one of the most important jazz musicians in Turkey, was born in 1980 in Istanbul. He learnt to play the popular songs of the day with the keyboard his father had gifted him when he was only 7 years old. His uncle noticed his talent and prepared him for the conservatory exams. He studied the double bass between the ages of 11 and 22.

He played with Halit Ergenç. Two important musicians who were supposed to come from abroad for a performance missed their flights, he got on the stage in their place. He started to consider becoming a jazz musician, and was surprised to realise he was already a part of the jazz world. You will read about Kağan Yıldız’s jazz journey and more in this interview.

In this installment of NTV Radio’s “Bizim Cazcılar” program, Kağan Yıldız played “Pitter Panther Patter” from Duke Ellington and Jimmy Blanton’s album, “Moanin” from Charles Mingus, who is one of the most important composers of the 20th century, “Take My Hand” from Charlie Haden and “Slam” from George Mraz’s album Grand Slam, which he recorded with Jim Hall, Joe Lovano and Lewis Nash. If you wish, listen to one of these pieces while you enjoy the interview.

How did music enter your life?

My father bought me a keyboard when I was 7-8 years old. I started playing some pieces on it. I used to play popular pieces. My uncle, Orhan Akıncı, was instrumental in introducing me to music. He is a music teacher. He noticed my talent and started to prepare me for the conservatory entrance exams. We studied really hard. We practiced 4-5 hours every day for almost a month. I got into Mimar Sinan University State Conservatory with full scholarship and enrolled in the double bass department in 1991, when I was 11 years old. So, music entered my life with my uncle’s influence.

Why did you pick the double bass, was your uncle influential in this choice?

That was luck. There is an ear test during the entrance exams. Then they gave me a second test, but that one actually wasn’t an exam. They picked an instrument for me. My dear teacher Melih Balçık was there. He is still my teacher, since I am finishing my graduate studies there after a 10 year academic break. Melih Balçık came over, looked at my fingers and asked me if I would like to play the double bass. If I get a positive feeling from someone, it becomes impossible for me to say no to them. So I said yes. I could say that was a coincidence. There was also another teacher asking for me 5 minutes before this conversation, a violin teacher. When he asked me what I wanted to play, I had said violin or piano with my uncle’s influence. When my name was read a second time, after I had accepted to play the double bass, Melih Balçık had said “We got him in the double bass department.” The violin teacher said “But I was about to start him with the violin”, so there was a 5 minutes difference between these two choices. It was pure coincidence… 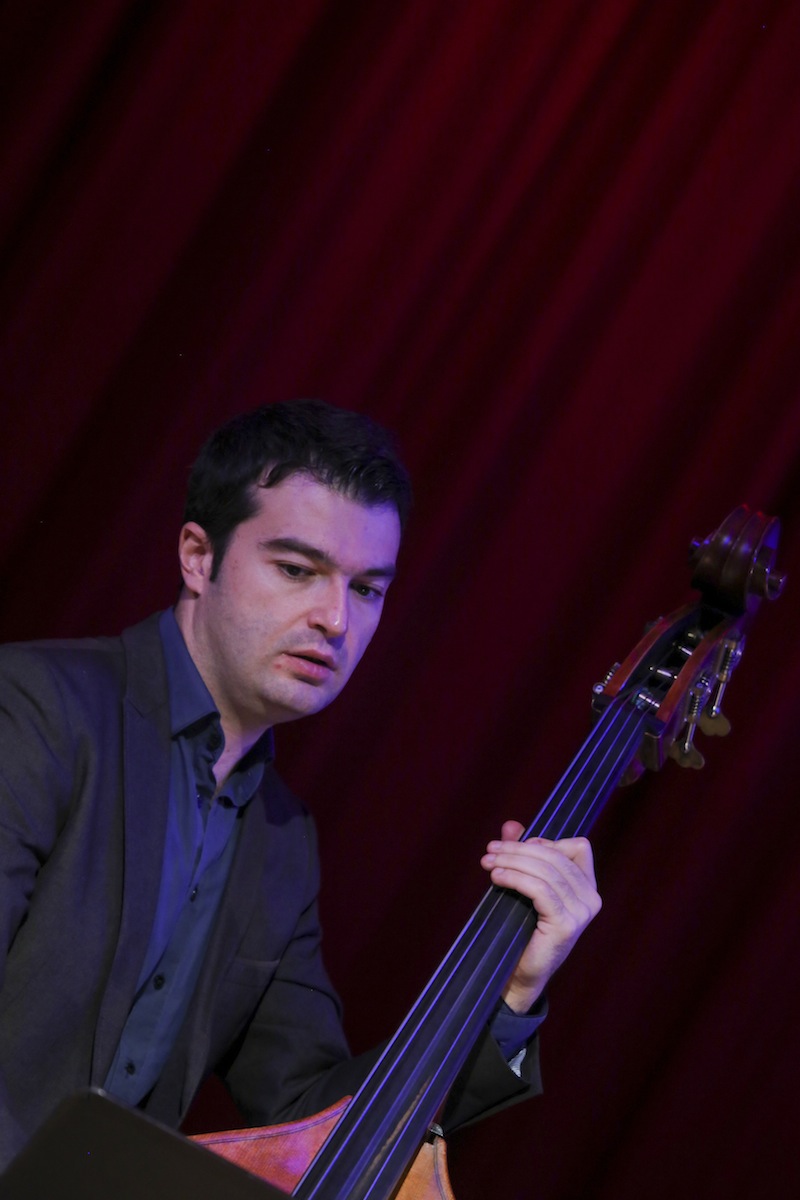 How kind of attention did you receive from your relatives during this period? How did jazz enter your life?

My parents supported me becoming a musician. I would like to thank them. Because not every family is supportive like them. In our country, they don’t want their children to become musicians. I got into the conservatory in 1991 and started playing the double bass. Piano was the secondary instrument, like in every branch. I graduated from the conservatory in 2002, but received a classical education during my high school years. It was cool to play with the fingers instead of a bow at our school. We used to play the double bass with our fingers, and throw the bow aside. Halit Ergenç, now a very famous actor, was in the opera department at our school back then. And we had an older friend called Levon who was a pianist. I was 14-15 years old. They would sing beautiful pieces. Halit, Levon and I used to play together, the three of us. We gave a concert together as well. It started like that. It wasn’t exactly jazz. We would play musical pieces; musical pieces are very important. Lots of jazz pieces were written with the influence of musicals. When I was 18 and got enrolled in the university, I was influenced by my friend Tolga Bedir, who was a year ahead of me. He is a great musician. He was in the violin department, but played the piano excellently as well. He introduced jazz to me. I experienced what an enjoyable genre it is and started to play the double bass with him. Then I met Ercüment Orkut, he was 3 years my junior. He is currently active in the jazz circles, we watch his concerts and make projects together. We started playing together back then. We formed a clique in the conservatory. That is how I started playing jazz. 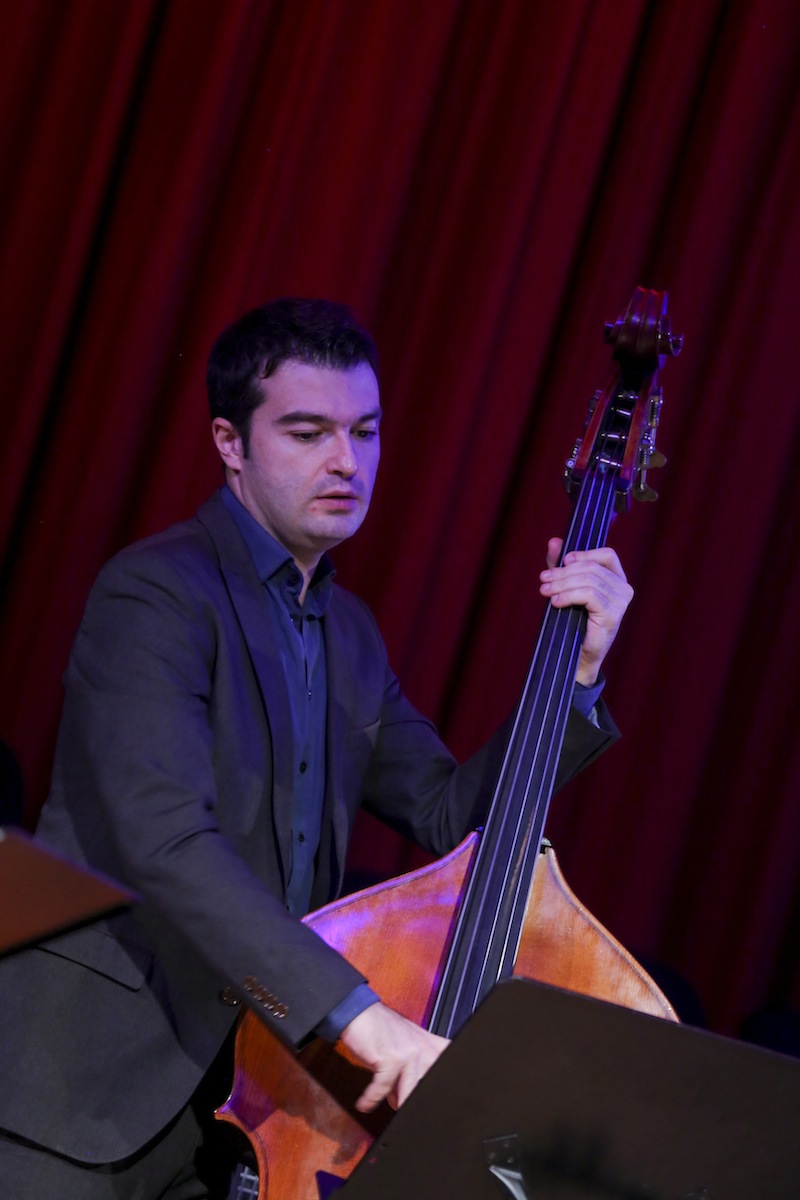 ‘‘I Suddenly Realized That I Had Become A Jazz Musician”

How did you become a jazz musician, how did that decision take place?

I didn’t actively play jazz during my university years. I started doing that 3-4 years after my graduation. I started to play at Nardis in 2005. This was very important for me, because it is a real jazz club and a meeting place for many jazz musicians. There aren’t many jazz musicians in Turkey and most of us live in Istanbul. Everybody knows each other and when a new name emerges, everybody hears about that and you start to play with different musicians. There was also İstanbul Jazz Center in Ortaköy back then. I started to play with musicians like İmer Demirer, Cengiz Baysal and Serkan Özyılmaz there. This was a dream team for me, it was incredible. After that, I started to play with Önder Focan at Nardis Jazz Club. That got the ball rolling. Sibel Köse, Sarp Maden… We had a band with Sarp Maden, Cem Aksel and İmer Demirer. This was a great experience. It was very important for me. Jazz is a genre that one learns on the stage. You learn as you play with good musicians. Because you want to keep up with them, try to play like them and hear the melodies they play and repeat them. I played with almost everyone at Nardis that year. This took me a step further. I had become a jazz musician, skipping the decision process. A lot of foreign musicians were playing at Jazz Center back then. American singers would come with their own pianists. Cengiz Baysal and I would accompany them.

You probably have a lot of interesting memories?

I have an unforgettable memory. Kerem Görsev called one day in 2005, asked “Kağan, are you busy tonight?” I said no. He told me to come right away. “Caribbean Jazz Project” is a very important group in the jazz world. Their drummer and bassist had missed their flights. There was a big strike in France that day. These musicians were flying out from France, and they weren’t able to catch their flights because of this strike. Cengiz Baysal and I played with that band that day. It was an incredible experience for me. These are the kinds of experiences that money cannot buy. They were influential in my personal growth.

Who are your favorite jazz musicians?

Of course, I love many world-renowned jazz musicians. There isn’t enough time to count them all. But, to give an example of my favorite double bass players; I really love George Mraz. Then there is Scott LaFaro. Larry Grenadier from the newer names, he plays with Brad Mehldau. I really like him. Then there is Benny Golson from the older generation. Ferit Odman, Burak Bedikyan and I had played two consecutive gigs with him at Nardis Jazz Club. There are many names, but these are the few that popped up in my brain right now.

What other genres do you like and listen to? 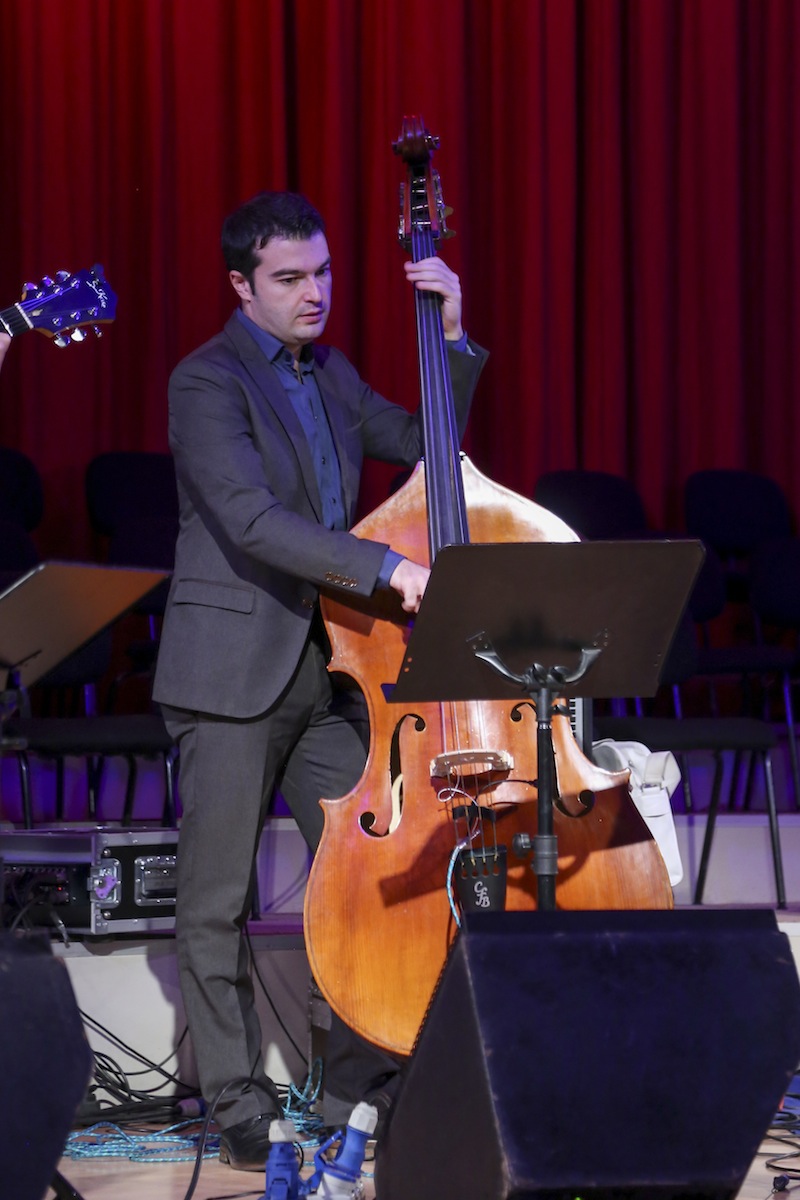 “Jazz Is Learnt Through The Master-Apprentice Relationship”

What are the necessities in becoming a jazz musician?

Nobody should start playing jazz unless they aren’t madly in love with this genre. I used to listen to jazz everyday even before I started to play it. I would listen to it for 24 hours. You need to really love it. Proper practice is important. Education is also important, but the most important thing is to perform on the stage. This genre is learnt on the stage. You learn it from people you play with. It should be like a master-apprentice relationship. This is the most important thing. Those who play with musicians way better than themselves learn the most.

There is a lot of improvisation involved in jazz. I believe one has to practice a lot?

If you don’t play for about a week, you start losing some things. The instrument doesn’t forgive. There are practices that I have to do every day. Especially when I am not playing a gig or a concert. When I do have a concert to play, I always practice beforehand. These days I practice for an hour or two before a concert, but I used to practice for a longer period. It got shorter because of my busy working schedule. But I should increase this as well. 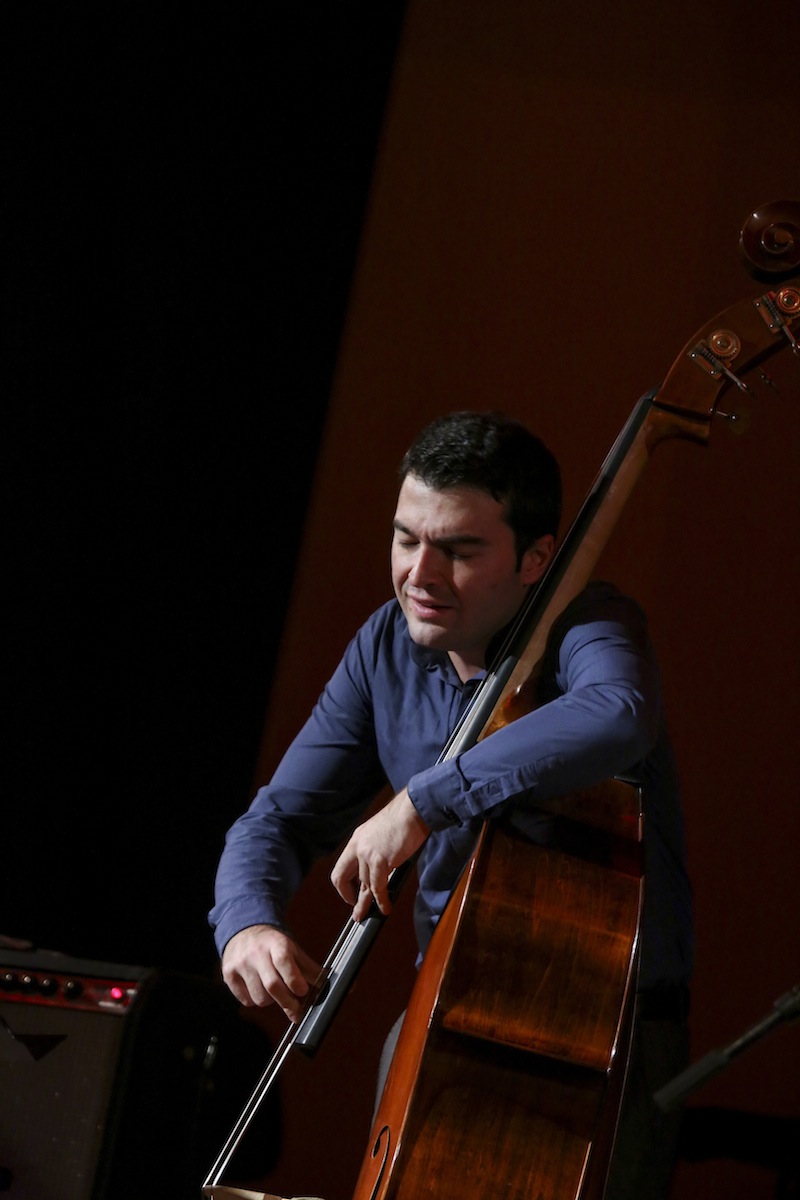 ‘‘You Forget Both The Past And The Future On The Stage”

Jazz, instrument and the stage… These are the parts of a whole?

Jazz actually is the musician’s wife, girlfriend, or whatever we call that. Because you have an incredible connection and interaction with it. Music is actually this way. When you get on the stage, you forget the past. You forget your future plans. You just live in that moment. That is a special moment because of this reason. Instrument and music is like a girlfriend at the same time.

What are your future goals, do you have any album plans?

My biggest goal is to play better, produce better things, and to improve myself. This is the goal of all musicians. I haven’t recorded an album yet. I would really like to do this. I might be a little late to do this, but I want to put out something great. I want to create my own sound. Maybe I will record one album, or maybe I will record two; what I really want is to make them little in number and big in quality. And I want to travel the world with the music I make. I want to go to different countries and to give concerts there. My most important goal probably is to make people happy with my music…

How broad is the jazz audience in Turkey?

The number of people who listen to jazz is unfortunately less than those who listen to other genres in Turkey, just like it is in Europe and the States. This isn’t a situation specific to Turkey. It’s the same in Europe. The jazz circle gathers in Istanbul in Turkey. There are concerts, festivals happening. But these aren’t enough for a city with a population of 15 million. There is only one jazz club. There should me more. I think the biggest problem is the lack of education. The number of institutions that give courses on jazz are so little. For example, I teach at Bahçeşehir University, but we don’t have a graduate program. We are trying to open one but can’t, for various reasons. There are such problems. There is a need for support. I think especially the government and private institutions should provide support. But despite all these deficiencies, there are some great musicians in Turkey.