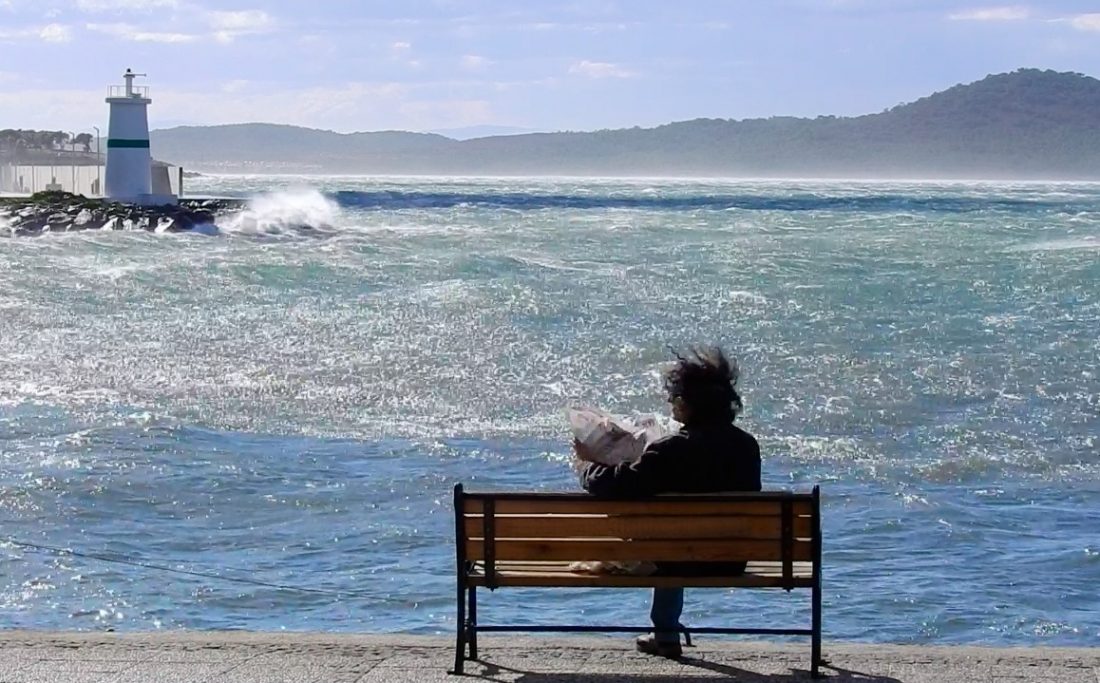 Even though their numbers are dwindling in the digital world, going to a music store (a holy place to visit for the collationers) and seeing categorized sections such as classical, jazz, rock or pop feels useful. It makes finding musicians and albums very easy. But there are some musicians who puzzle people categorizing these albums, because these musicians or bands themselves chose not to be in a category by internalizing all music genres in their compositions.

We will be talking about Serdar Ateşer, a great example to such musicians, and especially his poetry compositions in this article.

Serdar Ateşer released four albums until today. His first two albums are dominated by instrumental pieces while his third album “Avdet Seyri” illustrates a shift to poetry compositions. His last album “İş İşten Geçer Geçmez Ordayım” consists of pieces with lyrics and its booklet features poets like Edip Cansever and Murathan Mungan as well as lyrics writers such as Leyla Tuna, Meltem Ahıska.

Let’s listen to the most popular song of this artist on digital platforms before we move on to introducing all of his works. Our beloved poet Murathan Mungan gave the lyrics to Serdar Ateşer to be composed into a song titled “İstemeyerek”.

(Translator’s note: The translations of the poems in this article are intended to convey context only)

Serdar Ateşer’s discography mostly features Murathan Mungan’s poems or lyrics. We call them lyrics because Murathan Mungan’s relationship with music is very special and he wrote many lines that transformed into compositions, especially for the band “Yeni Türkü”. He wrote both poems and lyrics for Serdar Ateşer, who says “Murathan’s usual choice is to have the lyrics composed”.

I would like to introduce our musician in depth before we take a look at his album Avdet Seyri, a work beloved by his fans. 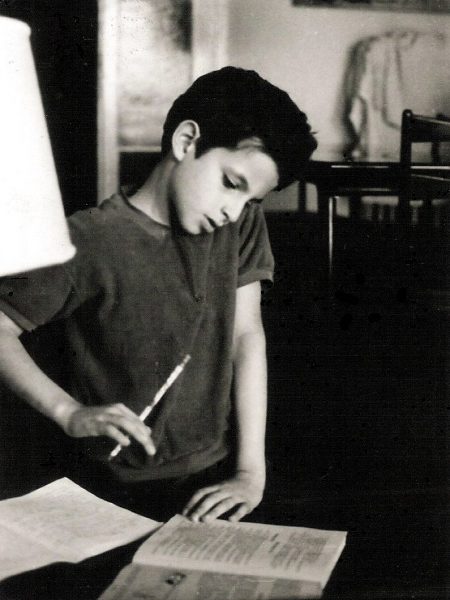 Serdar Ateşer was in elementary school when he took his father’s classical music recordings, especially those of violin concertos, to his room in order to train his ear. His taste for music reached such highs that he even felt embarrassed about listening to such high-quality music among his friends who listened to pop or rock.

He soon bought himself a guitar, just like most musicians’ common story, and this situation caused problems at home right away. His interest in music created an excuse for him to ignore boring school classes. He and his friends could make music as much as they wanted in the multi-purpose room because they were to represent their school in competitions.

Ateşer entered Milliyet Newspaper’s music competition with Hakan Gürses and his childhood friend Ayşe Tütüncü in 1976 and they made it to the finals. Onno Tunç was a member of the jury that year and the band played Pink Floyd’s important composition called “Time” during the finals.

The coup of 12th of September got in the way of the musician’s performances after high school. Ateşer found himself in politics just like any enlightened youth with the spirit of the period and adolescence. He spent this time listening heavily to music and discovering new things just like many of his friends during this time when it was almost impossible to make music.

Serdar Ateşer’s music career restarted actively in the beginning of the 80s with Mozaik Music Ensemble. He was the composer, vocalist and bass and electric guitarist in this most unique band of Turkish music history, releasing three albums. He left the band after their 1988 album “Çook Alametler Belirdi’ and focused on his solo work. He says that jazz musicians such as Cem Aksel,Turgut Alp Bekoğlu, İmer Demirer and Hakan Ayer started to occupy more space in his life after this year. 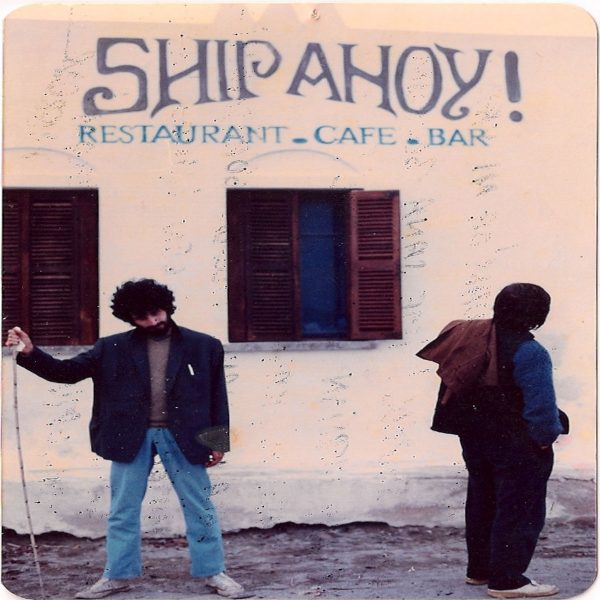 Ateşer released his first album “Shipahoy! (Bir Serdar Ateşer Kaseti)” in 1987. This recording was done with a device with only four channels in a home environment, and was produced and distributed by the musician in person. The (Bir Serdar Ateşer Kaseti), which means ‘A Cassette by Serdar Ateşer), in the album’s title was a nod to the popular sentence “A film by …” used in movie posters often at the end of the 80s.

Serdar Ateşer’s little salute to the movie sector coincidentally enabled him to enter this industry as a musician the same year. He wrote jingles for ads those years and met director Nesli Çölgeçen and wrote the soundtrack for “Selamsız Bandosu” which featured Şener Şen in the main role. 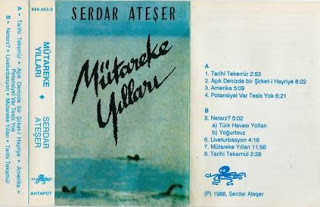 Ateşer released his second album called “Mütareke Yılları” in 1989. The album featured Erkan Oğur, Gürol Ağırbaş, Turgut Alp Bekoğlu, Melih Özçelik, Nedim Nalbantoğlu, Hakan Kurşun, Levon Balıkçıoğlu and Sumru Ağıryürüyen and illustrated Ateşer’s curiosity in recent history of Turkey. The musician now had his own studio, enabling him to record these unique pieces arranged by himself. He did not only record his own albums i this studio but also Bülent Ortaçgil’s “Bu Şarkılar Adam Olmaz” and Erkan Oğur’s “Bir Ömürlük Misafir” as well as taking the responsibility of the musical director. 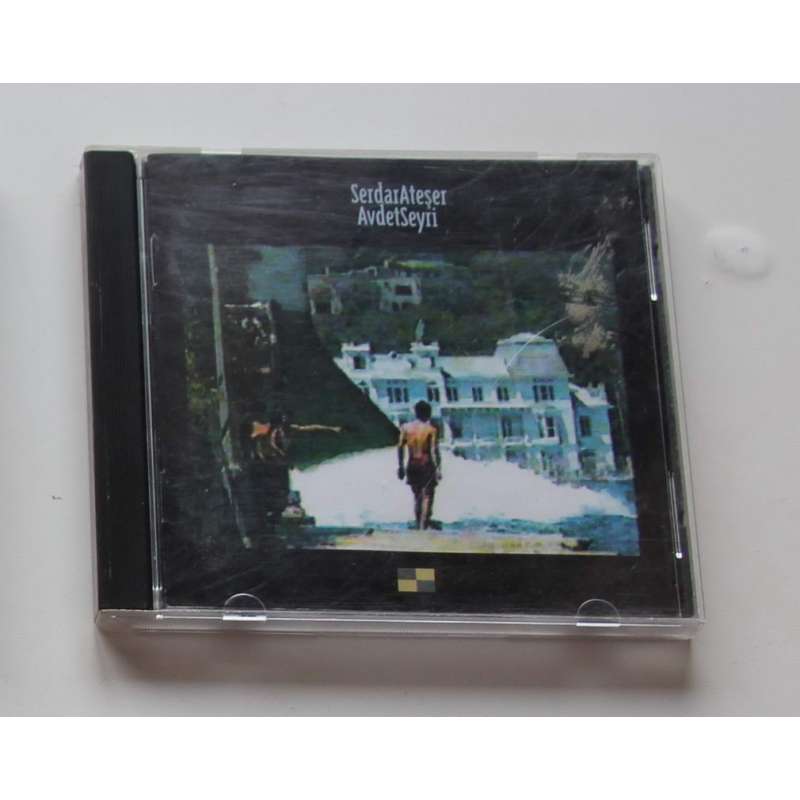 Ateşer released his third album “Avdet Seyri” in 1997. This album consisted of 15 pieced and featured esteemed Turkish musicians once again. Famous designer Bülent Erkmen created the CD’s cover design and its booklet was also designed with attention to detail. The album emphasized Serdar Ateşer as a multi-instrumentalist and a unique vocalist. Another thing to note about this album is that the artist included his first poetry compositions in “Avdet Seyri”.

This album has a special place in Serdar Ateşer’s discography. The poem titled “Fact Red”, as can be seen in the picture below, was written by the musician’s close friend Melih Özçelik for this album. 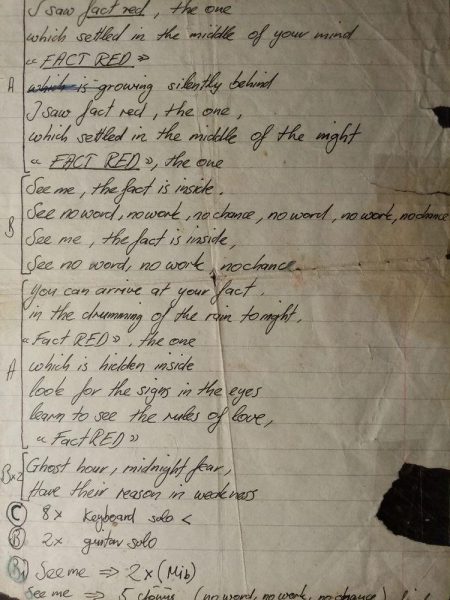 Give me time La Luna / Look, everything is over / Everything / Went crying / The waters got cold

A victim falls now / Among us, La Luna / A victim among the three of us / a cool line is drawn in the sky / It is too late, too late now 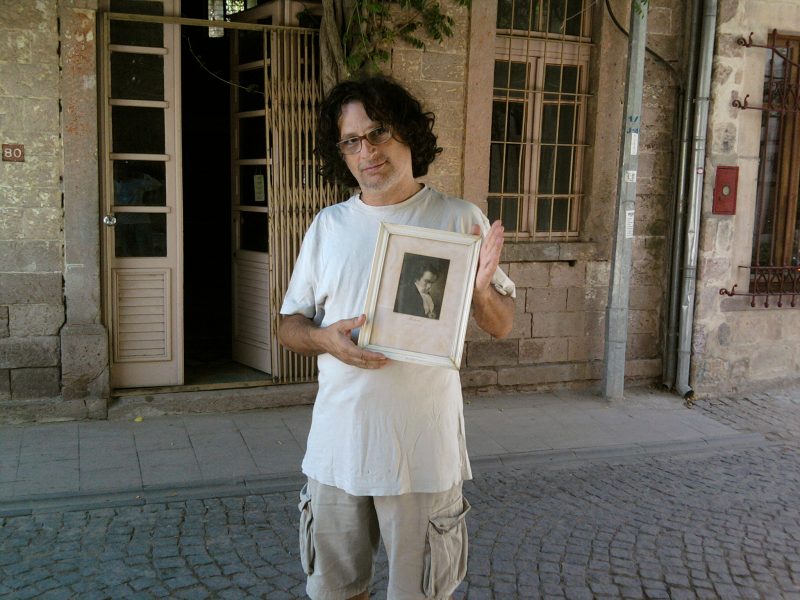 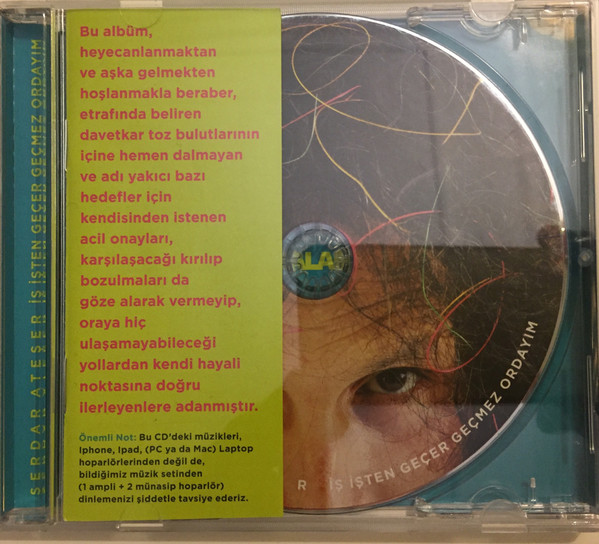 Serdar Ateşer released his fourth album “İş İşten Geçer Geçmez Ordayım” in 2018. The cover reads “This album is dedicated to those who like excitement and love, yet hesitate jumping into the inviting mist surrounding them head-first, following their own path that might never lead to their imaginary destination as they accept the hardship and breaking points they might face by refusing to give urgent affirmation to fiery goals.”

This album features esteemed friends of the musician such as Cem Aksel, İskender Paydaş, Mesut Uçar, Onur Duygulu, Korkut Peker and Sumru Ağıryürüyen and it is significant in a sense that all the pieces are written on poetry.

There are ten tracks on the album and they feature lyrics and poetry of Edip Cansever, Murathan Mungan, Meltem Ahıska. The opening piece features stanzas from Cemal Süreya and Turgut Uyar as well as Edip Cansever’s immortal 1964 work “Tragedyalar”. Cansever is a representative of the second new movement.

Serdar Ateşer says “Edip Cansever’s words were recommended to me by two of my friends, Suat and Emine couple, from Rumeli Hisar where I used to live back then, saying it fits really well and I got really excited when I read Tragedyalar briefly. I strongly felt that I could compose songs using some parts of these poems…” about using this work.

You Have No Strength / Edip Cansever

And you enter a restaurant, chatted with the waiter / Ordered wine and food, that’s all

You happened to smile at your thoughts / Either something funny or an insignificant anecdote / But just ahead, playing with his buttons / And biting his nails / Maybe he keeps watching you.

If you bought books, magazines every day / If the postman brings mail every day / If you took your time too long / In a government Office / If you miss a couple of busses, why not / In fact, even if you did nothing / It is weird / It is as if everyone will look at you with doubt.

If the crowd slowly becomes you / If your face looks like their faces, your clothes similar to theirs / Like a patient suddenly thinking they are healed / If you scream a little, if your strength allows / An echo: you are always lonely / You are always lonely. 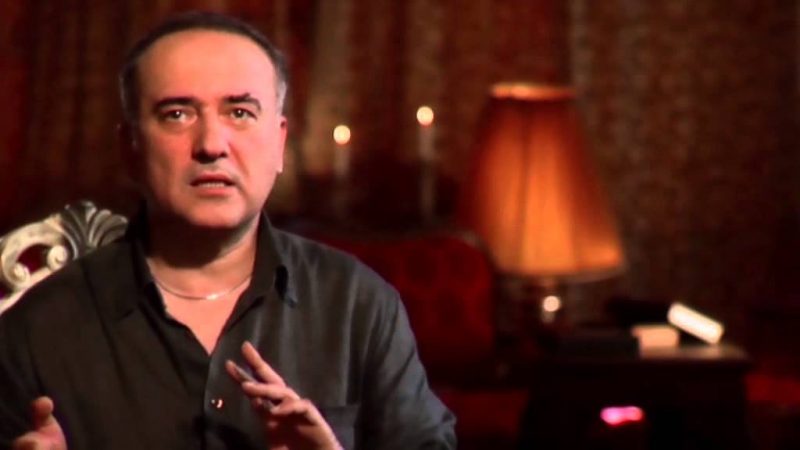 Serdar Ateşer’s discography shows that the musician composed Murathan Mungan’s lyrics and poems for prominent musicians such as Göksel, Jehan Barbur, Sumru Ağıryürüyen and Koray Candemir. “İş İşten Geçer Geçmez Ordayım” features the poet’s works “Soygun” and “Kırılgan” from his poetry book “Mırıldandıklarım”. You can listen to the lyrics of “Geç Tango”, given by Murathan Mungan to Serdar Ateşer on the same album.

Tired distances / With what cost / Plummets of destruction / Points of divergence / Maybe trenches maybe castles won over / Theft theories questioning every relationship anew / Looted from each other / Rotten, rusty loot / Which alleviated the pain / Which bandaged the wound / Short instances of love as thunder / Ephemeral / Dark clouds circling back in / Everyone to their own shelter / In their own mountains / Forlorn / Bridges cannot be crossed / Mysterious lakes / we made it to our dark walls / As if / Carved in drinking tables / Shivering as childhood resurfaces / Our wounds / As we are so similar / Why were we so distant / Claw marks in our words / –we were wounded before– / As we return from theft nights in pieces / Tell me which of us won 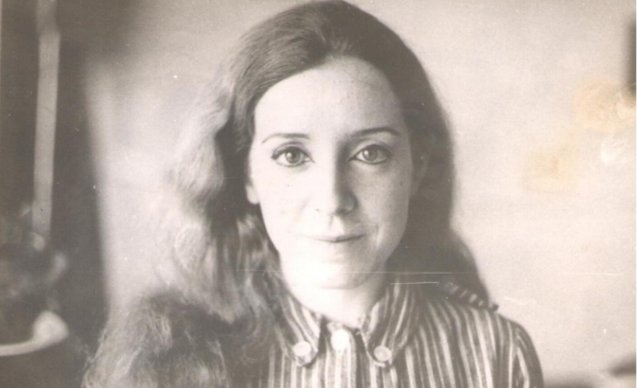 The other Edip Cansever composition in the album is “Kaç Kişiydik” written for Tomris Uyar, who was the love interest of four famous poets of the second new movement.

And it was asked / what were we back then / we were like sharp knives tired of giving up, as we were / as it was, being lovers

and it was asked…

Day is over what time is it / Will our war ever end / Sadness well earned / Will we have it too?

As we keep on glancing behind /  On what’s left / Sadness well earned / Will we have it too?

You will pass by without looking / At those Wall corners / Your eyes, faces, hands / No fear, no grudge, no loss / You will have days you have yet to know / Yet to taste / In the only organized color in the world

Serdar Ateşer says “… I want to compose music with my own words now, make my own songs… But that doesn’t mean I will never write compositions on the words of poets again” about his future projects. We will continue to wait for his music and melody with excitement as his fans.