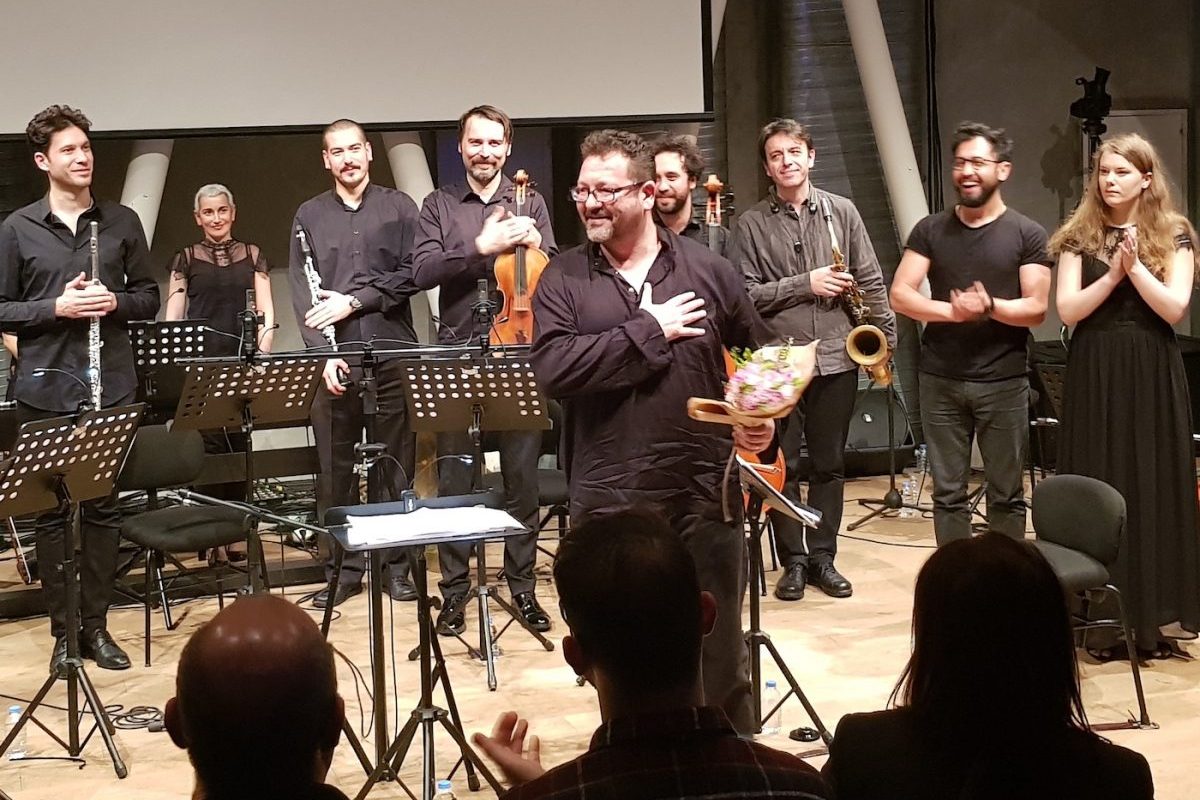 Another chilly Istanbul evening I want to find a meaning in…

Colorful and bright back streets of Taksim, still vibrant despite the cold… The tourists I run into are all concerned about taking a photo with the Galata Tower, saluting those who wait in life with all its might. Fortunately, the tower isn’t going anywhere, it always smiles to the people within the shot.

On the other hand, when you turn the white pages of this notebook, you see numerous people asking millions of questions and looking for their answers, running around, old Istiklal Street, which I can walk on after so many years, looking ready to take on another 10 years in the future… Guitar players, flute players, those who play nothing but waiting with their palms open for a few coins to buy some tea or maybe food, those holding their lovers’ hands, people taking selfies, those who sell knick knacks, those who cannot decide whether to get a latte or a cappuccino and finally decide on Tukish coffee, couples who try to make a future on the social media, sitting across one another in small cafes with their heads buried in their phones, people, humans, teenagers, men, women… Life was headed to a cold, grey but also hopeful Istanbul evening without taking a moment to pause with its never ending participants…

Of course, I wasn’t expecting to find the meaning of life and the answer to my questions on the bottom of a coffee cup, previously filled with bad-tasting, heavy filtered coffee, but I realized I needed to let myself go in the protective power of music in order to get over the mystery created by the solutions I have yet to see and found myself on my way to Borusan Sanat. 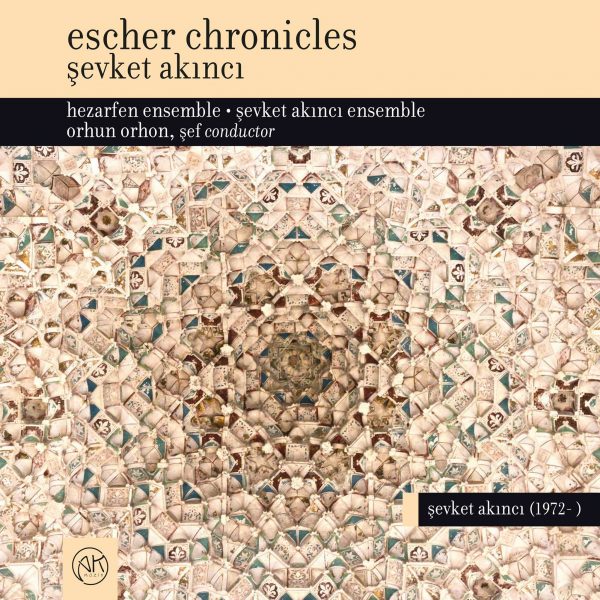 “Escher Chronicles” is the first concert I followed at Borusan Sanat. I would visit the old Borusan building right across this brand new one, maybe 2-3 times a week, to watch Beatles movies, documentaries on Jimi Hendrix and Led Zeppelin, dream as a little child that maybe one day I would become a famous musician just like them, walking towards the bus stop to return home, completely stuck in my dream world. After so many years, I realized that I don’t have a world as close to that childhood dream of mine, but still aware of what is real, or what could be real, as I walked towards the gates of Borusan Sanat on the 20th of April on a Saturday evening.

I run into acquaintances from Bahçeşehir University’s Jazz School. We chat. It has been a while since I saw them. What are they up to lately, what level are they at, do they play in a band, will they make their own band, are they giving concerts? So many important questions, so many dense answers. I get in line like everybody else. Two little kids appear at the gates, tiny surprises of the evening. They are holding bouquets of flowers, they walk inside with their mothers among the surprised looks of the onlookers. The little girl barely leaves her mother’s side, while the boy is hyper and adapts to the warm atmosphere around him right away.

We go upstairs and are greeted by professional sound and light systems. The chairs and lights on the note stands are awaiting the last check from the technicians. I think the seating is appropriate for the day: A lovely sitting formation reminiscent of M.C. Escher’s works, even Penrose stairs if you view it with a bit of creative thinking, seeming to suggest that the notes will never stray too far from each other and yet will meet one another where they started no matter what they do in between. The members of the audience sit where they find available in a first come first served system. I actually don’t mind one way or the other. I don’t like those taking photos during concerts as well, for example. I find watching the concert with my eyes, listening it with my ears and saying “Yes I am present at this concert!” is a more important feeling, or even possibly a luxury. I think the paradox of sitting or not sitting is somewhat similar to this.

As I turn my head, I notice a “job” on the left-right plane, “Listen To Your Eyes” in yellow neon lights greet us as if to suggest the audience should maybe have some idea about the concert before it starts. I look around a little more; the concert is being recorded with 3 cameras with video and audio. It is clear that this required days of intense work because this project includes an ensemble. 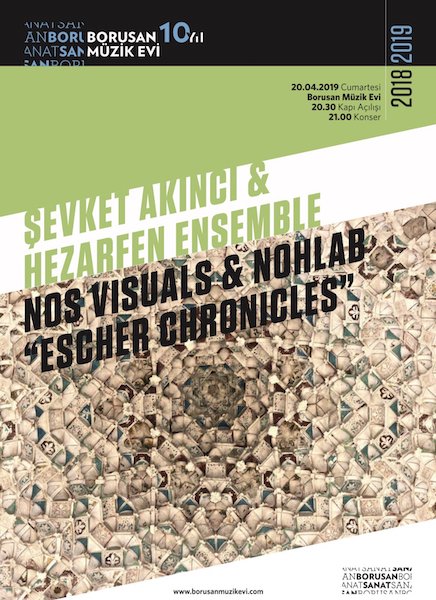 The lights turn off, the musicians take their places. Maestro Orhun Orhon lights the candle with the first piece among the applause, and what came after are pure dreams…

“Escher Chronicles” was presented to music aficionados in the April of 2017, but it had to wait 2 years to meet its audiences with the full sense of the word. You can feel that Escher (it is easy enough to call him Escher like an old friend after listening to the album a couple of times and internalizing it) has improved and evolved in these two years. I think one of the most special aspects of the album is that it doesn’t need to be classified as being a “jazz album or a classical album” or be contemplated as “Yes this album suits this genre more”. It is an album which can only be understood and loved by those who ‘listen’ to the music instead of merely ‘hearing it’, those who can listen to all the sounds life has to offer “with their eyes in the appropriate moments”. I believe that the album launch concert of “Escher Chronicles” at Borusan Sanat is one of the two most prestigious concerts of the year, along with the album launch concert of tÖZ among the music performed within the boundaries of the country and their concerts (this includes all the genres that we could use as examples).

“Escher” is almost like a puzzle. It is an album like a jigsaw puzzle, one that cannot be easily mended if a piece is lost, if a note is forgotten or a bar is played too early or too late, leading up to a variety of repercussions. For example, if the integrity of the jigsaw puzzle is lost, it would mean nothing and would need to be thrown in the garbage where it belongs even though one was trying to complete it with joy. Therefore I pay extra attention to how the pieces flow and the harmony in this flow in albums like Escher. One might think the album actually consists of two of three movements as you listen to it over and over again, despite the fact that it is split into pieces with different titles. I think the fact that nobody clapped between the pieces was a perfect detail that showed how the audience and the music are in harmony with one another during the concert.

There was a visual feast going on up above lead by Nos Visuals, Nohlab, as the auditory feast continued on the ground. Every single thing felt in our hearts with every harsh or soft note appeared in front of our eyes, and the “Listen To Your Eyes” motto made even more sense.

If you think, dream or question whether there is a “mathematics of music” or “music of mathematics”, Hezarfen Ensemble is right by your side with all its might to answer this question during the Escher Chronicles launch performance at Borusan Sanat.

I think those who attended the premiere of “Don Giovanni” in Prague in November 1787 at Tyl Theatre had the same ideas in their minds and hearts as those gathered to attend Escher Chronicles’s world premiere at Borusan Sanat. Tyl Theatre still stands against time and is standing tall in Prague, and Don Giovanni is still with us…

Şevket Akıncı was questioned for years for the music he did with “Islak Köpek”, was the subject of parodies and sitcoms, was asked “Is this music this man is making?!” or “He just makes empty sounds with his guitar!”. However, the musician, who had to face these things in the past, proudly showed everyone that he created “his own Don Giovanni” after the launch concert of Escher Chronicles at Borusan Sanat.

We cannot know if Borusan Sanat will survive the years, but there is a truth that will always reminds in our minds as music lovers, one that started forming as we returned home: Everyone will know that Escher Chronicles premiered on these grounds and that geniuses like Mozart exist in our country as well, and that one doesn’t have to look to far to find music or composers who will become legends in time.

Şevket Akıncı’s magnum opus’ “Escher Chronicles” might be the real music that Real Turkey has been looking for desperately for many years.