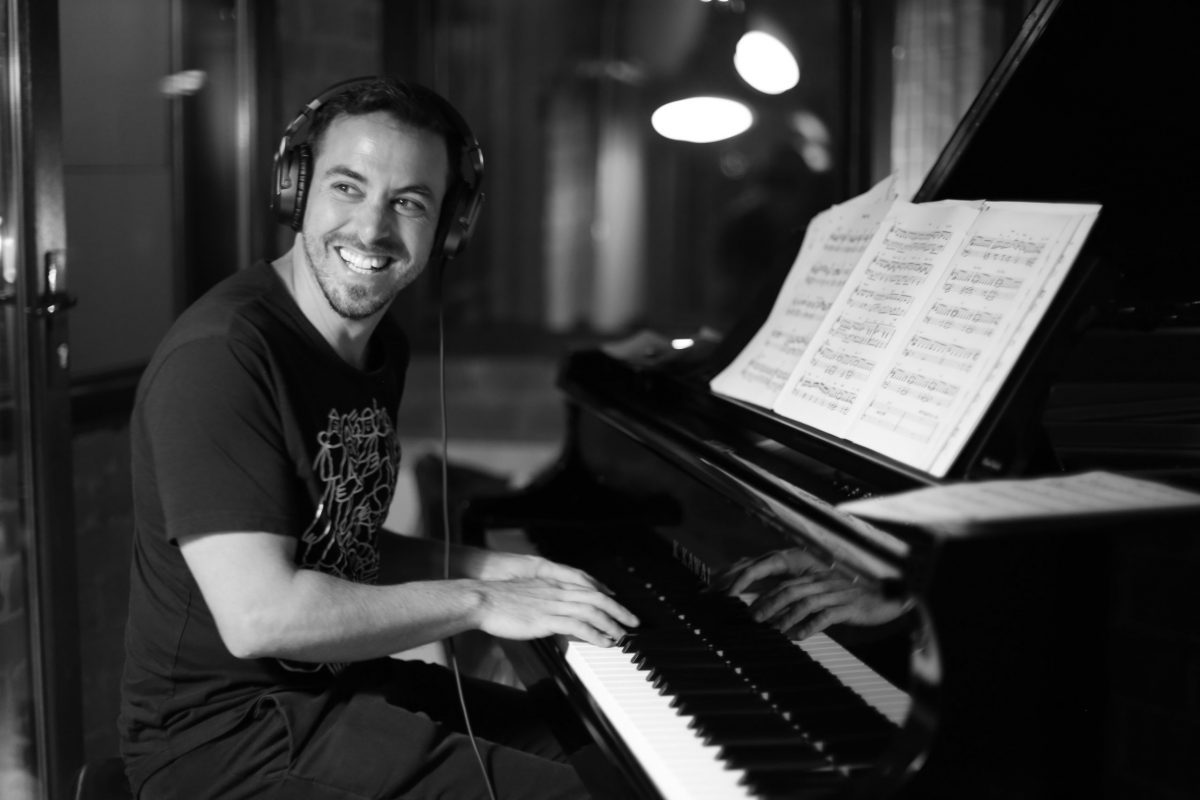 Coşku Turhan raised attention of jazz critics and jazz lovers with her debut album “Chapter I: Wood” in 2019. Not long after, he is now back with his second album “Chapter II: Grains”. Let’s move on to our overseas conversation right away and get the details from himself.

Very exciting moment! Your second album released on 24th of March. It feels like new pages opened one by one from the second chapter of the same jazz book and it is just like it hasn’t been two years since the first chapter; we continue reading it carefully from where we left off. First, I should mention this. We realize that we haven’t forgotten the flavors of the previous album. On one hand, this chapter has some links to the first one; on the other hand, we hear some new words. What would you like to tell us about your freshly released album when you think about this aspect?

I love to create a theme around each album. This, not only creates an integrity, but also pushes creativity besides the limitations and some challenges. For instance, after finding the concept of “Grains”, I tried to come up with a digital sound that would go with that theme, and “Grains Prelude” came about from that search.

Sometimes your compositions sound like movie soundtracks and it brings us to an emotional journey. Could you please tell us about that creative process?

Honestly, I also think that sometimes my compositions sound like film music. I guess I always start this journey with vocal melodies and compositions that keep the listener engaged. Most of my tunes came to my mind while I was fiddling on my piano at home, thinking about something else. In general, I am obsessed with the idea of combining two or three different ideas together while making them more vivid; not ordinary. 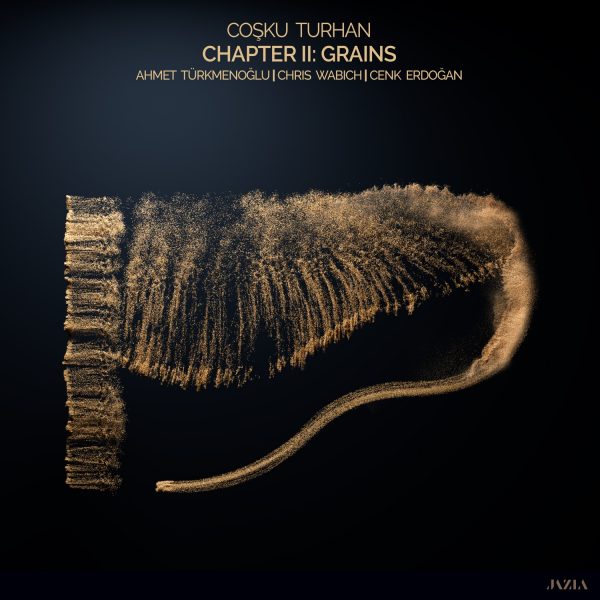 In your first album (Chapter 1: Wood), you had the chance to record with some of the great young jazz musicians in Turkey; namely, Ferit Odman, Ozan Musluoğlu, and Doruk Gönentür. In your second album (Chapter II: Grains), you worked with two musicians who are also living in Los Angeles like you; on bass, Ahmet Türkmenoğlu and on drums, Chris Wabich. Türkmenoğlu is known and appreciated amongst many jazz listeners in Turkey even though he’s been living in the USA for a long time. Can you tell us the story behind the recording?

Since we both live in Los Angeles, during the release of my first album, two years back, I did all the gigs together with Ahmet. Ahmet is a globally known super successful double bass player who understands and internalizes every music he plays. I look forward to making more albums together in the future as I really respect his personality and musicality. I would like to answer the question: “Is there any jazz drummer who loves and embraces Turkish music, and also a fan of poly rhythms in Los Angeles?” with Chris Wabich. He is an amazing musician who not only found his own “sound”, but he also plays Eastern music as if he grew up in it. We are so lucky that he is with us in this exciting journey.

There is also the legendary guitar player from Turkey, Cenk Erdoğan, as a guest artist. I probably listened to his “Kara Kutu” (Black Box) album at least twenty times. He is one of the most unique talents in Turkey. It’s an honor for me to make music together. I hope we can collaborate more in the future together.

In addition, I have to mention Vardan Ovsepian. Vardan has been my mentor on this album and prior to it; I feel so lucky to know such a person and a musician like him.

We recorded the album at the Tritone Studios which was founded and directed by Talley Sherwood. In spite of being a medium size studio, it is one of the well known recording studios that has been offering great service to LA’s jazz industry. With only two rehearsals, we recorded the entire album in two days. The environment and whole process of recording is extremely fun. I wish we had more time record to be able to discover more while playing together; but unfortunately it wasn’t possible due to the limited time schedule of the musicians and the studio costs.

While I was preparing your questions, your album played 3-4 times at the background. By the end of your album, the digital platform starts automatically with a different song. I am sure there is an algorithm in the background that decides what to play. What surprised me was it started playing such similar tunes; as “Sheherezadeh” by Aziza Mustafa Zadeh, “Bülbülüm Altın Kafeste” by Genco Arı, and “Down” by Çağrı Sertel. What inspires you and who inspires you?

Of course, there are so many, but I see the concept of inspiration to the carvings on a marble statue. The tunes you listen are like carvings that end up forming the statue of your musical identity. The musicians who came first into mind are: Aydın Esen, John Taylor, Chopin, Mozart, Brad Mehldau, Tigran Hamasyan, Vardan Ovsepian, Erkan Oğur, Chick (Corea), Herbie (Hancock) and many more…

In this album, we hear your solo piano recording in the first tune (Grains Prelude) and also in the last tune (Grains Coda). As if you are the one, who is opening and closing the curtain in the show. Would you think of releasing a solo piano album in the future?

That’s a good one. Actually, I would like to make an album where I make all the recordings at my house by playing different instruments myself; but before that I have other projects on my mind.

Was it difficult to name each track? Would you like to share some story behind any piece or pieces?

The process of finding song names is a difficult one. Just like the “Wood” album, I wanted the track names to be related to the whole concept of “Grains”. Some of them are found like that, but the easiest one I found was “The Man Who Cleaned The Forest”. That one is the story of my best friend, Beran Paçacı whom we grew up together. He is an amazing person, who devoted his precious free-time to clean up the litter in the forests of Turkey. He is great inspiration for others, not only because he is cleaning up after someone else, but by teaching us through our own mistakes. 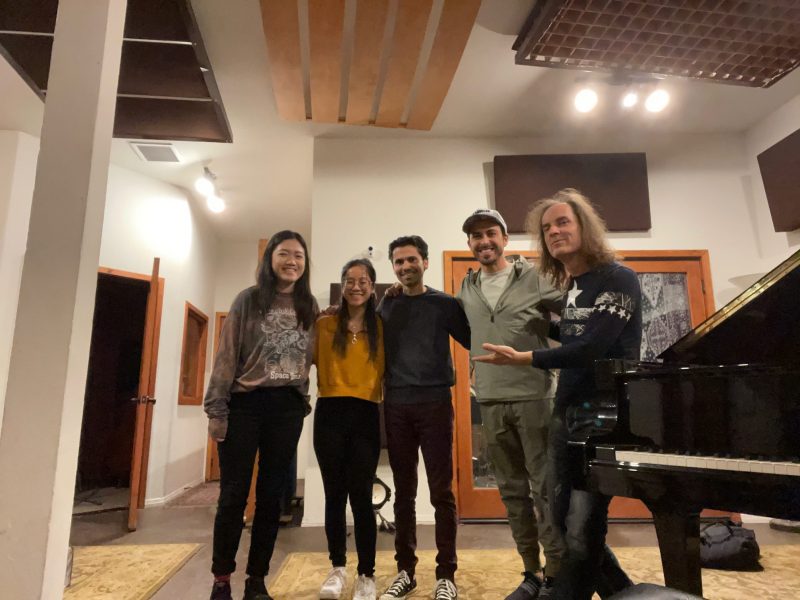 The simplicity, the minimalism and at the same time the depth on both of your album covers caught my attention. I feel like the designs go really well with the emotions of the songs and album names. What would you like to tell us about your cover designs?

My full-time profession is Visual Effects (VFX). Both of the covers were actually created with digital effects. I really like the relation between the nature (the things we know) and instruments. On this album cover, my super talented designer friend, Ozan Karakoç, gave me the idea of moving sands, and I created the sand piano image using digital effects. Gyroids music video was shot by my other talented friend Alper Nakri and my wife has been overseeing all my management for many years. You don’t need anything else in life if you have good friends and a great family.

I saw the JAZLA label on your covers. Is it really a recording/production company? In the future, are you planning to release albums of other musicians?

Yes, JAZLA is a production company that my wife and I established a few years back. Actually, I have a dream of starting an internationally acclaimed recording studio in which I would gather different musicians, make experimental recordings, and release them under JAZLA for free. Let’s see how the years will fare to this dream.

You play solo piano on the last song of the album; “Grains Coda”. During this track, we hear sounds of a family talking in the background. Could you tell about that?

Like I said earlier, most of my compositions came to reality while I was playing at home. One day I was testing the recording setup of the piano. My wife and son were playing soccer in the background. The entire scene and dialogue happened to be recorded. While I was listening, I really enjoyed the fact that I accidentally captured an amazing and a spontaneous moment. It’s like the sonic version of a photograph, that’s why I wanted to include that beautiful moment of my family in the album.

I’m breaking the formality at this part of the interview because Coşku and I have been friends for a long time. Musicians like you don’t come easy. It is very pleasing for jazz that you have sincerely recorded your compositions and performances like this! I’m proud of you, Coşku. I can’t wait to listen to the songs from your albums live in Istanbul! I hope it will raise attention of jazz festivals all around the world as soon as possible. Have a nice journey!

Thank you very much. The most exciting part of this effort and self-sacrifice is that people like you listen to and feel something about themselves. It is our biggest dream to give a lot of concerts and meet the audience.