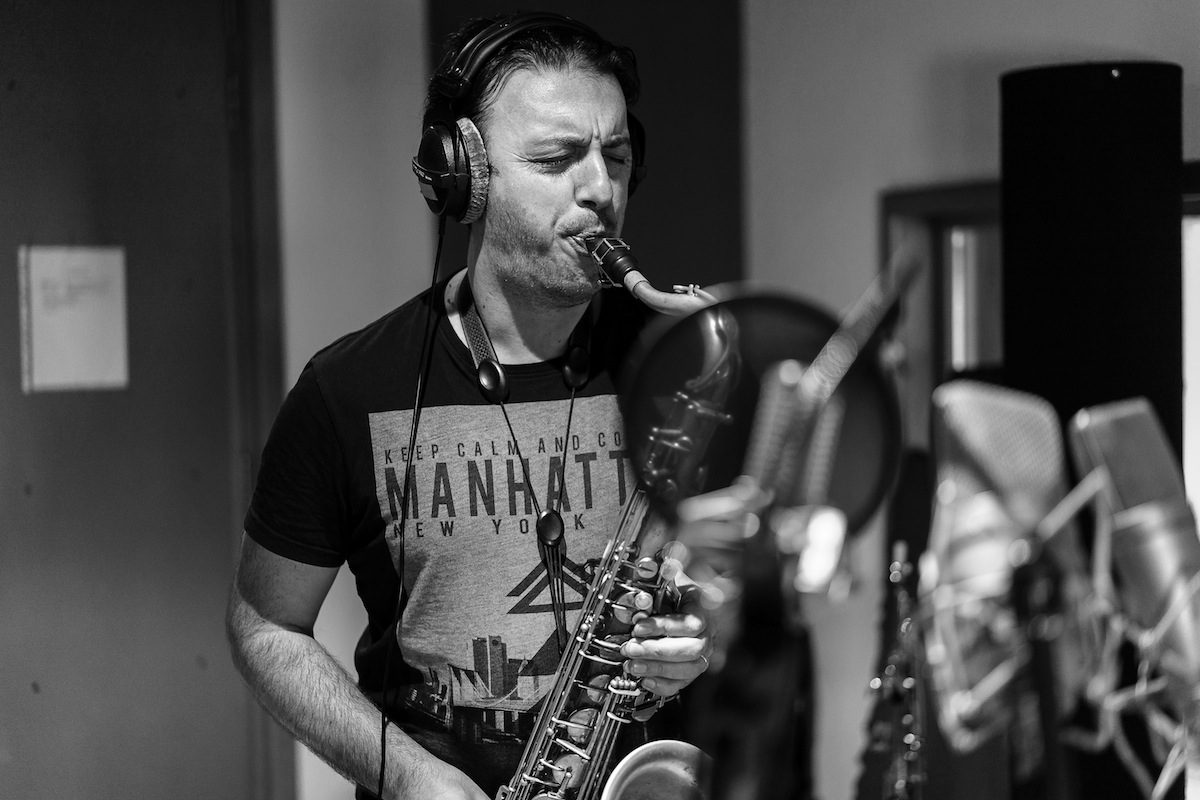 An evening in Beyoğlu. I am wandering around. It is really chilly. I wanted to get lost in the streets and walked towards Çukurluçeşme Street, the street where Saint Pulchérie is located… A vague, but pleasant sound is coming from a cafe with a tiny entrance. I suddenly stopped, climbed its tiny stairs right away and poked my head into the store after walking past the tables they were at the entrance. Then I realized that the people paying that evening were written on the blackboard with colorful chalks nearby the stairs. A young man is inside, and he seems to be lost in his instrument, commanding over the listener. I surprisedly asked the gentleman with the curly hair at the entrance without being able to hide my excitement: “Who is this musician?” Dear Turgay Demiryürek replied proudly with a small grin: “That is Tamer Temel…”

I listened for a while but ended up having to leave, very sadly… However, I had stopped thinking about things I was going to do, people I was going to meet as I walked away from the cafe; I knew that I had to keep this cafe, or at least this “genius” musician close to my heart. 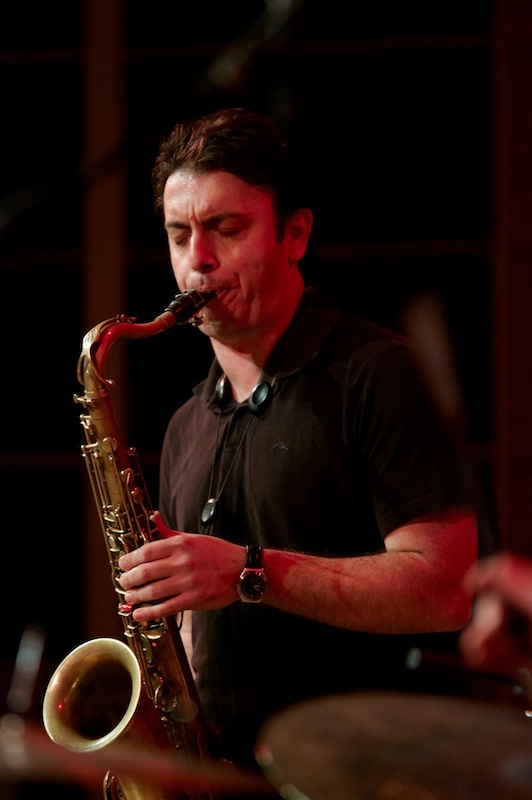 I bought his album “Barcelona” right away, it was released through one of the best jazz record labels in the country, A.K Müzik. I listened to all the pieces back to back and I realized I had never heard music quite like this before; I was enchanted. This album was supposed to be recorded in the States, but due to some unforeseen circumstances, they ended up having to record in Barcelona, and similar small details made me like this album even more. “Bir Kedi Kara” followed. It made me think of Ece Ayhan. I really like her…

I came across his wife Çağıl’s performance in her first studio album “Bir Parça Ay, Biraz Kuş”. My wife and I held our breath and felt all the heartfelt notes during the acoustic launch concert “Bir Parça Tel, Biraz Yay”, just as I was deeply moved by his performance in the album itself. We met him after the concert. I am strangely happy to carry the marks Tamer Temel has left on my heart when I listen to Çağıl’s album after that acoustic concert, when I listen to Barcelona” and when I read Ece Ayhan’s ‘Bir Kedi Kara’.

We had the opportunity to chat for a couple of minutes in a corner after the “Ercüment Orkut – Low Profile feat. Marius Neset” concert at Salon IKSV. He said “There is a while until the new album is released, but good things are to come, just you wait. The team behind this album will be familiar.” and I was excitedly smiling all the way back home.

“Serbest Düşüş” is now out, released again by A.K. Müzik. It is a familiar band, beloved just like a family. Serkan Özyılmaz from the “Bir Kedi Kara” team plays the keyboard (I know him from his work with Sibel Köse Quartet), Eylül Biçer plays the guitar (his talented playing can be heard on Ülkü Aybala Sunat’s album “Artiz Kahvesi”). Of course, there are some changes; Cem Aksel, Kenny Wollesen and Volkan Topakoğlu are missing. However, Tamer Temel chose his bandmates wisely, and his music is as powerful as ever. Volkan Öktem, who was in the legendary MIAM recording of “Koşar Adım” and Matt Hall, a musician who frequently plays at Nardis Jazz Club and whose technique I admire, join Tamer Temel for this album and enrich it with their presence. 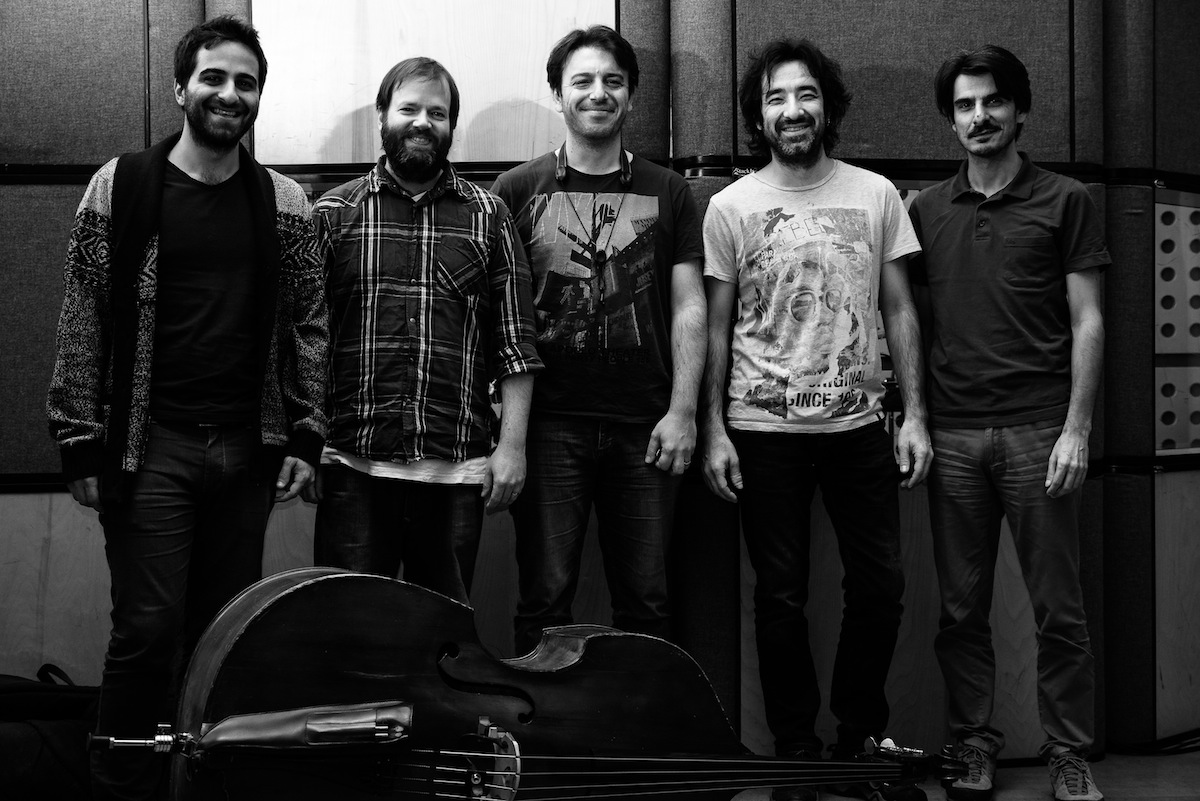 Another reason why I like Tamer Temel’s music is the way he names his pieces. The titles represent the feelings these pieces stir in our hearts, and his ability to pinpoint these names make Tamer Temel very special. You can read the interview dear Eray Aytimur made with Tamer Temel for our website, and paralleling the context of this interview, I also think that “Serbest Düşüş” is the soundtrack for Turkey and the world in 2016. “Serbest Düşüş” is about the improvized free fall (‘serbest düşüş’ means ‘free fall’ in Turkish) caused by the inability to get over the events and the life resulting from the past 10-15 years in this country, “Dram” talks about the explosions, the lives lost, and lights that have gone out, and “Koşar Adım” has a theme that seems to say “Yes there still is a way out, the salvation is ahead. We have seen the light, let’s quickly head there.” “Panoptikon” focuses on the facts that every step taken, every article written, every breath is so important, and that hope will never be entirely lost as we are being watched as individual and groups. “Bencil” might cause your heart to ache a little by telling about scared people who won’t (can’t) speak up, those who won’t (can’t) step up and only look for a way out for themselves…

“Serbest Düşüş” embodies many other feelings in addition to those I have mentioned above. But the truth is Tamer Temel gave the music lovers a solid “jazz slap” with his album “Serbest Düşüş”. This might be my favorite slap I have ever gotten in my life.