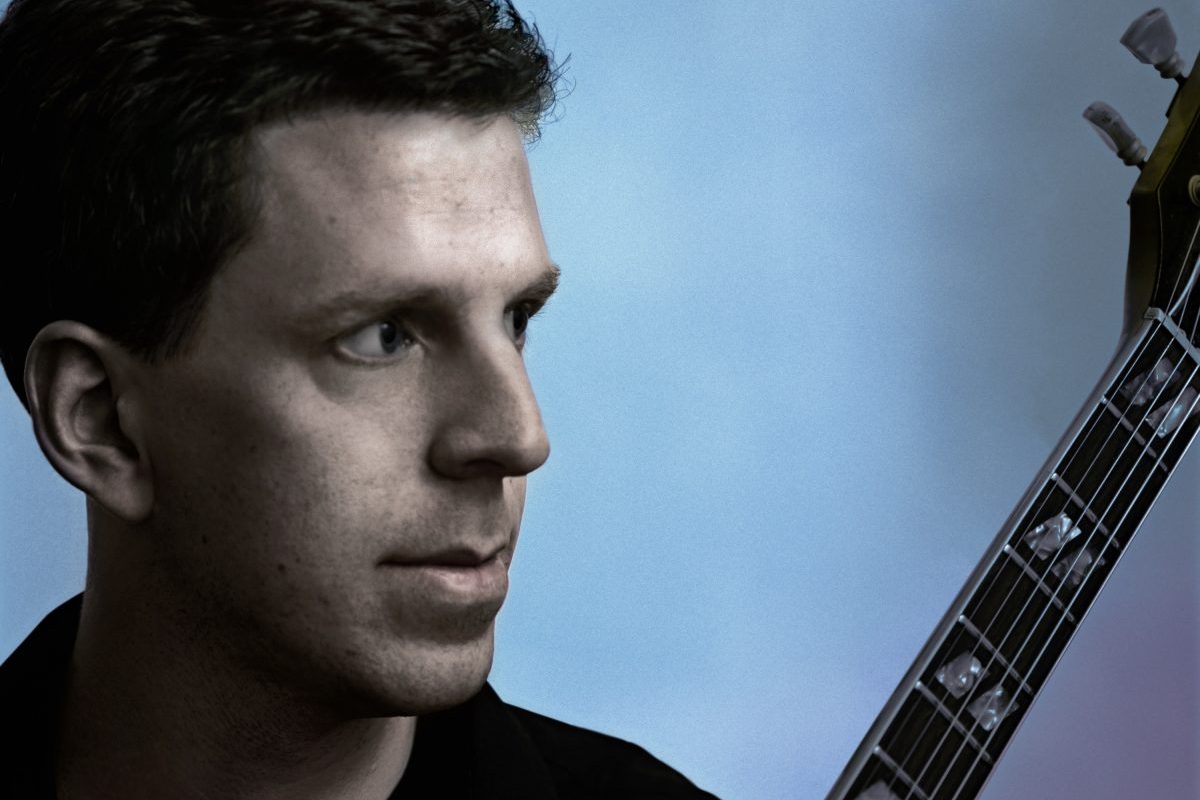 3 years ago, we concluded our last Dave Allen interview with a quotation from the playwright Edward Albee: “If you go to see a play (or concert or movie) and you come away unchanged, then that work has failed. It can or should have an impact on you. Everyone needs to be woken up once and a while.” There’s nothing I can agree more. Art should make you think, make you question, doesn’t always have to make you feel good but definitely have to impact you for a change. Guitarist, composer, educator Dave Allen’s music, doesn’t matter if you listen live or listen to one of his albums, always make me think and question and make me wanna push my limits further. Even when you have a chat with him for 20 minutes, you leave the table with questions on your mind to be answered for the rest of your week.

Dave Allen, who published as a leader his first album “Untold Stories” in 2004 and his second album “Real and Imagined” in 2007, has just came up with his new album “The Sky Above Her” a couple of months ago towards the end of 2018. Again with full of clever rhythmic and lyrical melodic ideas, harmonic mastery, layered patterns beneath the main melody and challenging odd meters, this album will take you through an intellectual adventure. With his warm tone, precise and electronic effect-less sound, Dave Allen shows us one more time the use of his humble yet clever leadership in this third album. The personnel are Jon Irabagon on saxophone, Gary Versace on piano and rhodes and Allen’s old collaborators from his previous albums Drew Gress on bass and Mark Ferber on drums. With 9 new original Allen pieces that we’ve been waiting for so long impatiently, “The Sky Above Her” is another unexpected, striking energy flow, a kind of a time travel that he always tends to drag us into. For his students and friends who miss him dearly in Istanbul, here are some questions about the story after he moved back to U.S.A and his new album.

1. What happened after you moved back to your home country after some years in Istanbul. It must be a big change?

Yes, it was a big change and it took a long time to adjust.  We wanted our daughter to start school in the U.S. and be closer to family.  I also felt the need to be closer to the musicians in New York City that I’ve worked with for many years. However I do miss my friends and students in Istanbul.

2. How was the story of this new album? I know that the compositions were almost ready when you were in Istanbul.

Some of the compositions on the new record took a long time to fully develop. Often I like to give a new piece time to grow, and it changes over time.  I keep discovering new things through performing it and getting to see all of the possible directions it might take.  Some of the pieces on the new record began as a seed in NYC, then developed in Istanbul, and then were finished in Philadelphia.  So this is music that has traveled and struggled over a period of time. 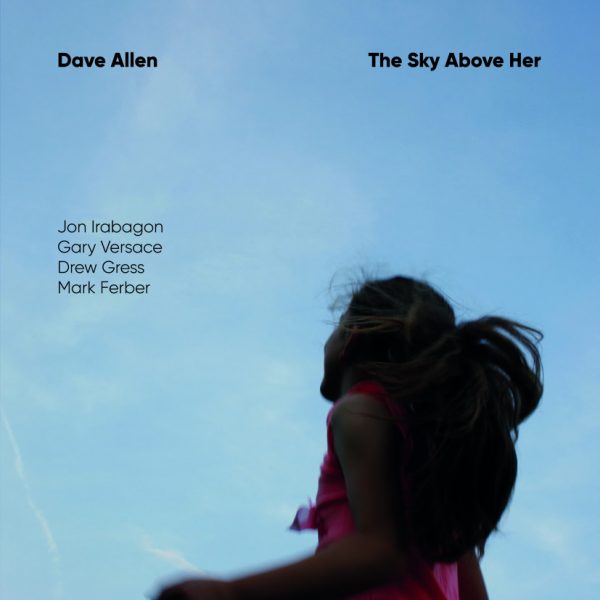 3. How about the recording process and the decision on the personnel?

I knew that I needed Drew Gress and Mark Ferber on the record because they are so incredibly creative and always know how to take my music to the highest level.  Playing with them is like going home.  I can write anything and there is nothing that is too difficult for them to bring to life. Jon Irabagon and Gary Versace are musicians I have admired for a long time and more recently got to know.  They are both masters and I think they brought a lot of energy to the recording. The recording itself was done in two days in the studio.  We spent about 10 hours recording, which isn’t much.  Some of the tracks on the record were done in just one take, which is remarkable considered how complex they are.

4. “The Sky Above Her” is named for your daughter Adri. The song also. What’s the story?

My daughter is an amazing creature and the best thing that ever happened to me.  I was thinking of her when I wrote two pieces on the record, “The Sky Above Her” and “The World Beneath Her Feet”.  The pieces actually fit together, because they are based on the same basic musical theme, but they are not together on the recording.  To me the title means that this is her world, and I am now seeing it through her eyes.  Her life is in front of her and the sky, and the world, belongs to her.

5. You’ve never used piano on your previous albums, how did you decide to add it in this one?

These compositions are more layered and more harmonically complex than some of my previous material.  I felt the need to have the harmony present throughout the record by using piano, rather than my previous trio and quartet work where it is only guitar. Most of the new compositions cannot be played with less than five musicians.  Gary Versace was the perfect player for this music.  He’s a master. Everything he plays on the record is better than I could have imagined. I will continue to work with this format as long as these kinds of complex compositions keep coming to my mind.

6. What changed from your previous albums to this one? What’s the biggest difference for you?

I think that the music has grown more layered and intricate.  I feel like the overall expression on this recording is stronger, more genuine.  Hopefully it is a step forward artistically and sounds more mature.

7. How is the teaching going? I know you are teaching in a university in Philadelphia.

Yes, I am an adjunct professor at The University of the Arts and at Temple University. I also have many private students.  Last year I began writing a book about advanced rhythmic concepts for improvisers and composers.  I hope to publish it in 2019.

8. This “Advanced Rhythmic Concept” is your first book. How did you decide to write it? Was it because you couldn’t find any material about the subject so you realize there is a need for it or you wanted to express your own rhythmic approach in a book format?

I began this book as a thesis for my masters degree. I have had a very positive response from everyone who has read it so far. In general, I tend to be most focused on the quality of time, the rhythmic flow, and the expansion of our rhythmic vocabulary. (My students in Istanbul will confirm this) I do not see much published material specifically on rhythm. With my students, my composing, and my work as a bandleader, I am always looking for ways to expand the rhythmic vocabulary in composition and improvisation. I am fascinated by rhythmic layering, polyrhythms, the use of odd meters and shifting meters. In the book I use a lot of ideas from my compositions as examples and want to immerse the student is exercises that will help them develop a strong time feel and open up possibilities for them. I am still revising the book and I hope to publish it next year. 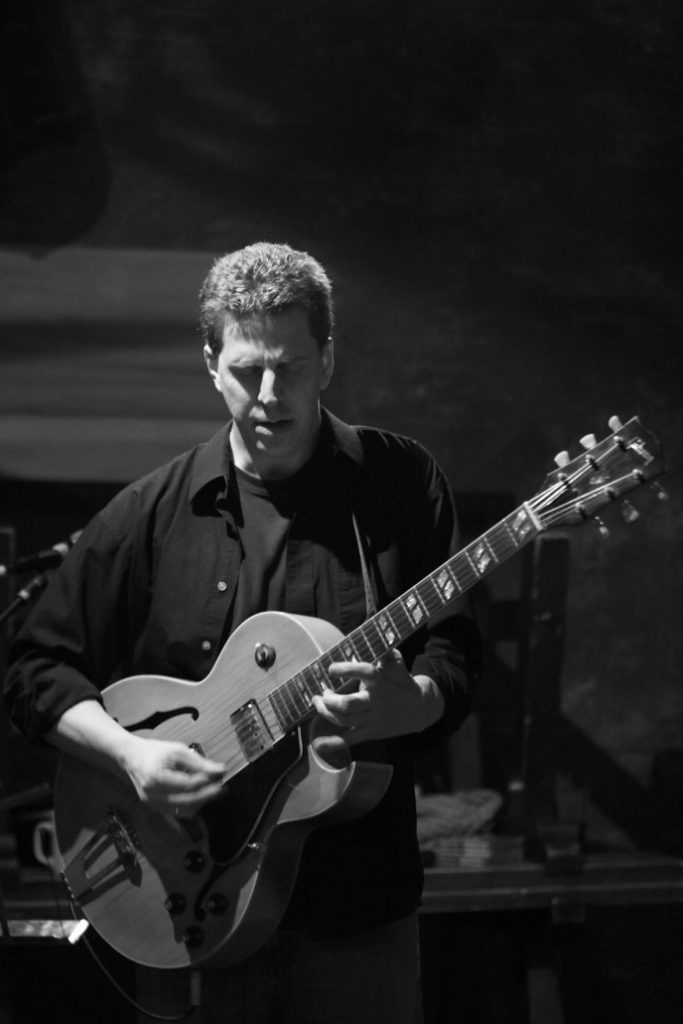 9. Other than the rhythmic approach, can you talk about your melody writing and your composing process?

It used to be that I would write melodies and harmony at the same time.  But more recently I hear rhythmic or harmonic ideas first, sometimes in a very abstract way, and then I search for the melody from there.  I usually feel like the composition already exists, but I have to work to discover it and let it come to life.  I think of Michelangelo saying that he felt like the sculpture is already in the stone and he must work to release it. It is usually that I have to wait until I hear the melody in my head.  But the way I do that is to improvise many variations, and then see what feels natural. Eventually I have to accept what has developed when I am taking the new composition to be played by the band.  You could work on any one composition forever. The poet Paul Valery said “One doesn’t finish a poem, one abandons it.”  At some point you have to release the new song into the world as it is.  It’s like your child, really.

10. You had problems with your left hand and shoulder last year and you couldn’t play for a while. How difficult was it for you?

It was very difficult, and still is. I stopped playing for about 5 weeks, but worked on music away from the guitar. Then I gradually increased my playing again I have to be careful. I am still struggling with some pain and limitations on my left side.  It means I cannot practice as much as I want to.  I am working with a physical therapist and doing exercises and yoga to try to improve the issue.

11. I know you read a lot, besides listening so what are you reading and listening these days?

I continue to read and re-read my favorite poets, especially Wallace Stevens and A.R. Ammons.  I read a lot of books of essays about art, literary criticism and theory, psychology and philosophy. I especially love Roland Barthes and Walter Benjamin.  I have not had much time for novels lately, but there is a long list of books I would love to spend time with.   I am listening to the latest Steve Coleman recording, Morphogenesis.  I spend a lot of time with the live Miles Davis recordings from 1966 to 69.  There is nothing better than that!  I also listen to a lot of classical music. Sometimes more classical than jazz.  And of course, I have to listen to whatever my daughter is listening to, whether I like it or not!

12. You had the Kimmel Center Jazz Residency for 2019 which is very exciting. Can you talk about the project?

For the Kimmel residency, I will be composing new music in collaboration with the great poet, Raquel Sala Rivera.  I have wanted to do a project with poetry for a long time.  Now I finally have the funding to make it happen.  It will be a nice challenge for me, as the music will need to be different from what I usually write. There will be concerts and workshops over the next 7 months as the project is developed.